I’ve had a busy -well by my standards- few days since the last edition. Not so busy though that I haven’t started the day out on the veranda – the first floor, western one for those of you that are interested- with the ‘must have’ mug of black coffee and my iPad.

In between what I needed to do I’ve done my utmost to catch as many of the World Cup games as possible.

Last Thursday afternoon I got a telephone call from Louis Gillett, the engineer we’d chosen to make our ‘sick’ engine ‘healthy’. When I heard his voice I thought he was going to give me bad news. But no. He’d finished his work, the boat was ready to collect. Feeling pretty elated I told him I’d be down the next day to pay him and collect the boat.

Knowing that I needed someone conversant with the waterways from Louis’ boatyard in Boca Del Rio to our house I then ‘phoned the multi-talented, ever dependable Lloyd. He told me he had some work to do up near Journey’s End but would come and collect me around noon.

I was up way too early (even by my standards) at 03.45 hours) the next morning (Friday for those of you that may have lost track) and although I enjoyed my ‘me time’ there was a restlessness about me. Noon just couldn’t come quickly enough!

Lloyd arrived at the appointed time and Nelson, Anthony (they were going home for lunch) and I jumped on his golf cart and made the five minute journey to Lloyd’s house where we left his ‘cart and walked to Louis’ workshop.

I handed Louis his cheque and he handed me the keys to the boat and Lloyd and I stepped on board. Lloyd fired up the engine -and it sounded smooth – and I untied the mooring ropes and with Lloyd at the wheel we were off. First stop the petrol (gas for non UK readers) station on the western side of the island near the Sunset Boardwalk to put some much needed fuel in the tank.

Topped up Lloyd headed the boat in a northerly direction and we headed towards the boat’s new mooring spot at the end of our garden. We had an opportunity once we were away from the petrol station to give it some throttle and the engine performed very well. A throaty yet smooth sound. Power without too much noise. A bit like me I suppose!

The route back after that was taken very, very slowly because in parts the water is exceptionally shallow. It was obvious though that Lloyd knows these waterways like the back of his hand.

Along the way he pointed out schools of snapper and bonefish swimming in twos and threes. We also saw a couple of rays. Lloyd also showed me where a couple of caves are where lobster apparently ‘hang out’.

Meandering our way slowly back there was a quietness only broken by the soft purring of the engine and my constant questions to Lloyd. It was almost ethereal. I just know that Rose and I are going to really enjoy exploring this side of the island.

I’d imagined – don’t know why really- that the journey would be a relatively quick one. It wasn’t. I hadn’t legislated for the fact that the recent addition of a bridge near the Reef Village Resort 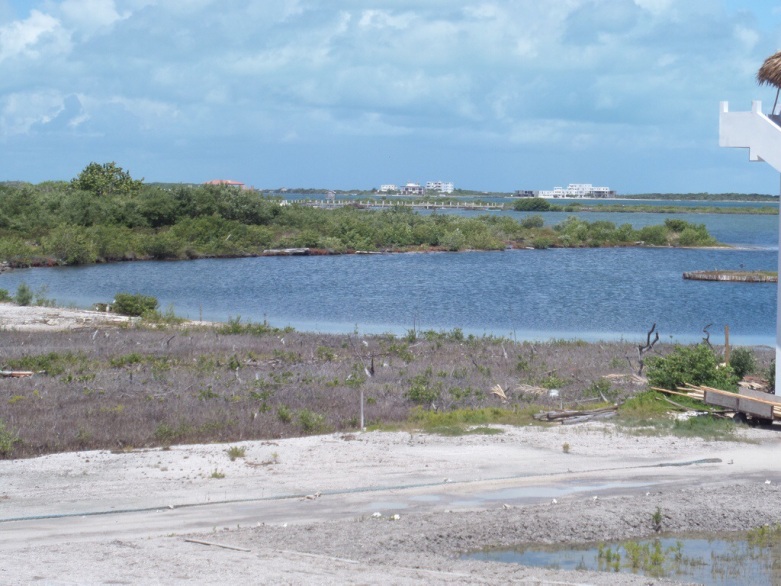 forces you to take a westerly course up to Grand Caribe where you are able to turn and head south to our home. Along the way though we had to take the Bimini down (very slowly because with no screwdriver on board (there is now) we had to use a key to loosen the screws) to avoid getting tangled with low hanging mangroves.

I’d left the camera at home so Rose could take some photo’s of Gunner making its way to its new home.

Carefully past the guys digging for landfill. 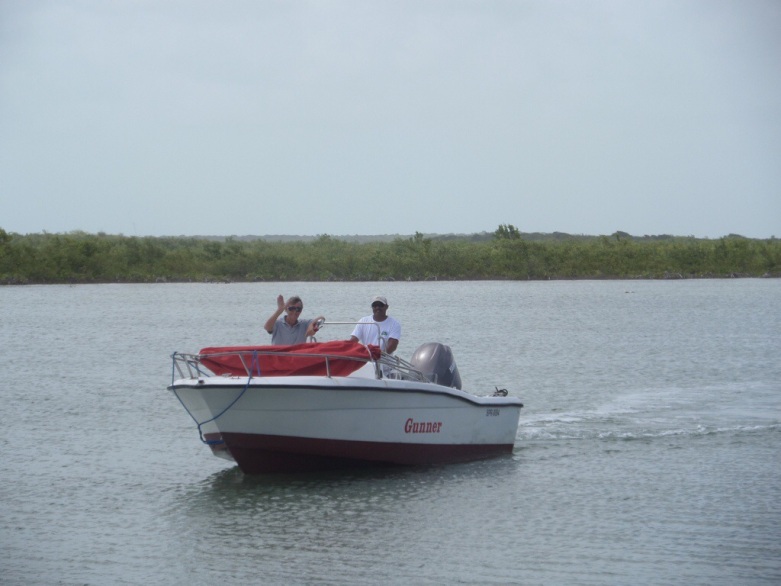 Time for another wave and 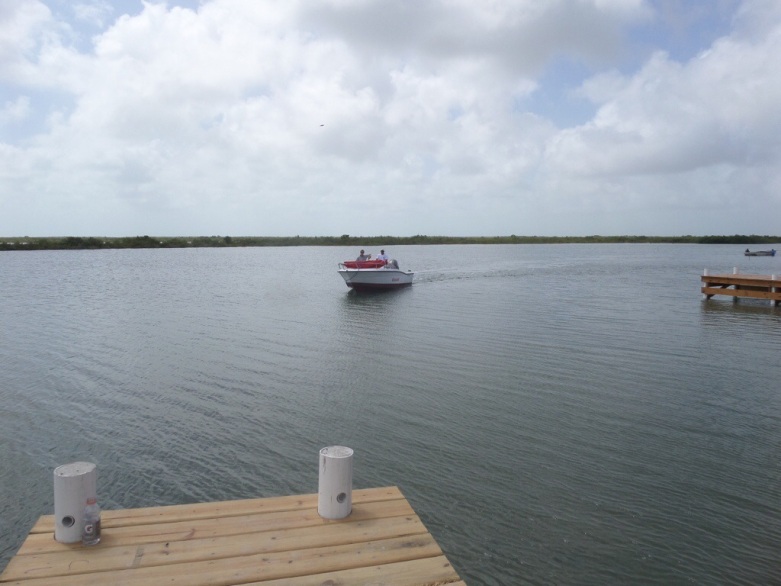 we’re heading towards our dock. 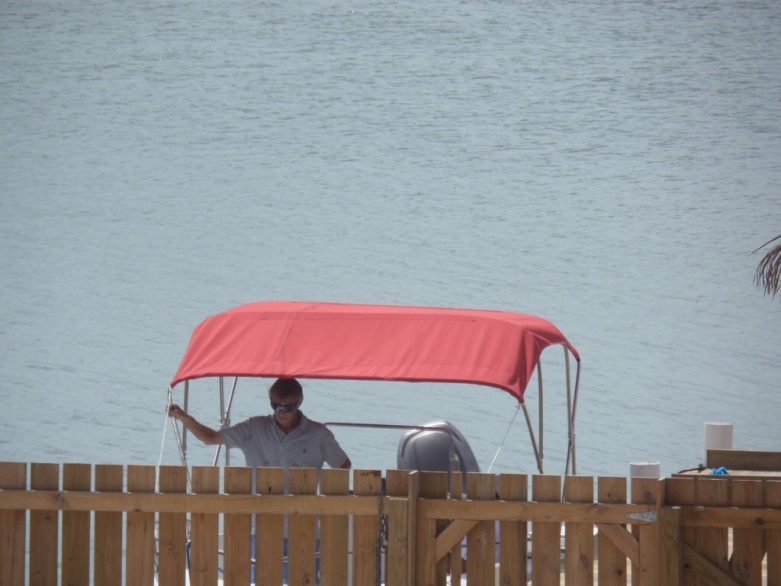 It has been a great experience but the bummer was that it took so long that I’d missed the Spain v Holland game! But it was worth it.

On Saturday Rose and I had a few things to do but our real plans revolved around England’s entry in to the World Cup. The game versus Italy at 16.00 hours.

We’d already decided that we were going to watch the game at Carlo & Ernie’s Runway Bar& Grill ( the only other serious alternative for a game involving England with plenty of Brits being present being Cholo’s) where we were going to be joined by seven British Army guys.

To give it an ‘English’ feel I asked Carlo if he could make English style fish and chips (CHIPS not fries) and he did a spectacular job of it. 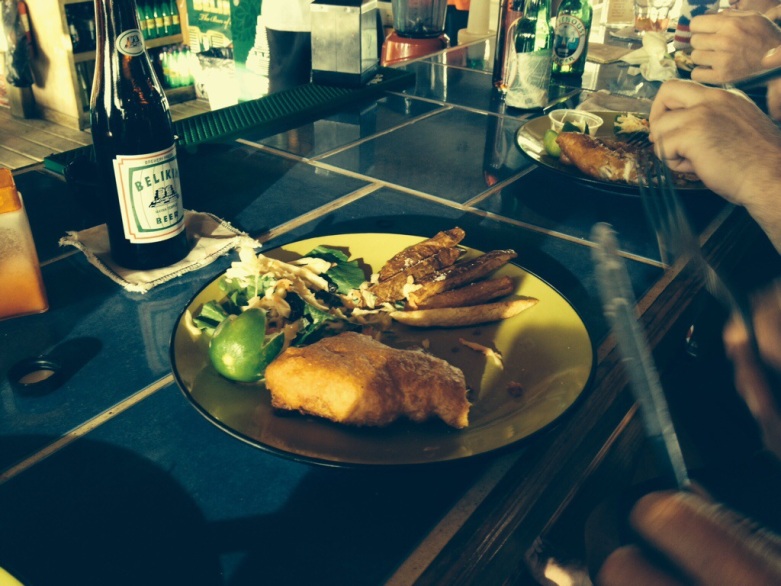 Chunky chips with the potato skin left on them. Seasoned with salt and malt vinegar. It looked so good that I’d already started on it when I remembered to take a photo!

Unfortunately England’s performance didn’t match the fish and chips and we went down two to one. We now must win on Thursday against Uruguay to give ourselves a chance of staying in the competition.

Depressed by our defeat I perked up when the next game started and Japan raced in to a lead against the Ivory Coast with a goal scored by the aptly named Honda! These guys were giving it their all and I was rooting for them. So much so that I felt like I was turning Japanese (yes, I know its bad but I needed to get a headline!). It didn’t last though and for the second time in the day ‘my’ team lost.

On Sunday (that’s yesterday if you’ve not been paying attention) I was up around 05.15 hours (yes a little later than normal which was probably caused by an intake of too much Belikin the day before) and spent around twenty minutes on the veranda. Time enough for a coffee before taking a shower in advance of the loss of power at 06.00 hours (this was scheduled to run through until 14.00 hours).

Rose and I then spent a couple of hours cleaning the boat. Our aim to remove the rust spots.

With the boat in a shipshape condition Rose and I freshened up and went for a late breakfast (Estel’s of course) and then headed to an exceptionally packed Caribbean Villas Hotel where we met the British Army guys.

Attempts were made to hook up the TV to the generator but to no avail. Fortunately though the Belize Electricity Limited (“BEL”) guys got the power back in good enough time for the Day Four entry of Argentina in the World Cup. With so many Argentina fans on the island I fear what may have happened to the “BEL” guys had they failed.

The headline for today’s edition is based on the single released in 1980 by The Vapors which reached number three in the UK Singles Chart and number thirty-four in the US Billboard Hot 100.