Those of you that read Sunday’s edition will know that I was eagerly (OK, and nervously) looking forward (there must be a bit of a masochist in me!) to the Arsenal v Spurs game.

Got everything done – including breakfast for Rose – before the kick-off (09.00 hours local time). TV tuned in to channel 103 (NBC). Nicely positioned on the sofa when the players walked on to the pitch. And then catastrophe … the signal was lost.

Try as I might (and believe me I did try) I could not get the match. Left with no alternative I switched to the Internet (at least it was working) and listened to the game on Talk Sport (a UK radio station). No where near as good as watching Arsenal beat Spurs by a thumping (sic) one nil but at least I was ‘there’. Figuratively speaking.

Not much else to say about the remainder of the day really but I did manage to persuade (after much cajoling) Rose to venture out with her bruised and swollen face.

Yesterday morning after time on the veranda reading The Times on-line (and especially the write-up on Arsenal’s victory over our North London rivals) I showered, shaved, dressed and went to Estel’s. It was a grey and overcast morning with frequent appearances of rain. It doesn’t matter though – whatever the weather the view is always good from Estel’s. And so is the breakfast!

When the time drew close for a visit to our build in Ambergris Caye, Belize Rose said that I should go alone. Believing that the longer she stayed away the more difficult it would be for her to go (the proverbial “if you fall off a horse get straight back on to it”) I used whatever skills I have to persuade her otherwise and we set off at around 15.15 hours. It was great to have her back in the cart. I prefer it when it is just the two of us!

On arrival we went straight to the Ground Floor self-contained apartment and saw on the way that Angel and Alfredo had been and still were busy applying masonry sealant to the external walls.

Northern exterior wall. Cutting in around the pipes to do.

At the back (western or lagoon side) of the house we saw that Manual had finished laying the floor tiles for the veranda of the larger of the two bedrooms. 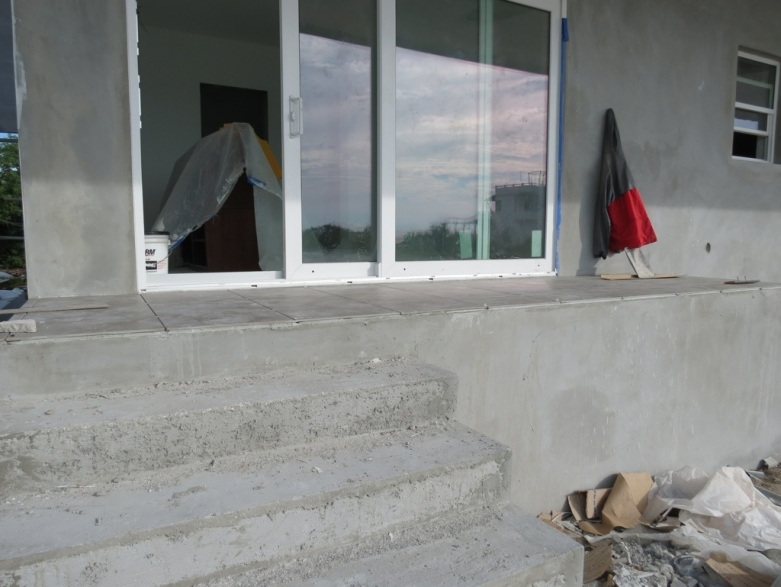 Finished with our tour of the Ground Floor (Wilson and Ernesto were still working in the two bathrooms) we went up to the First Floor and saw straight away that Moses had hung the door and fitted the architrave for the Powder Room. 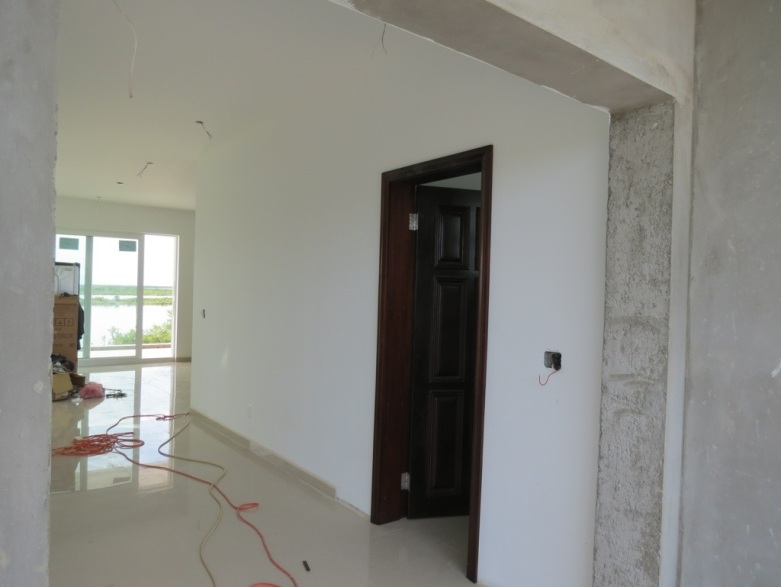 He had also fitted the architrave for the bedroom (Rose’s handicraft room).

Walking through to the kitchen we found Moses who, having hung the door for the Utility Room 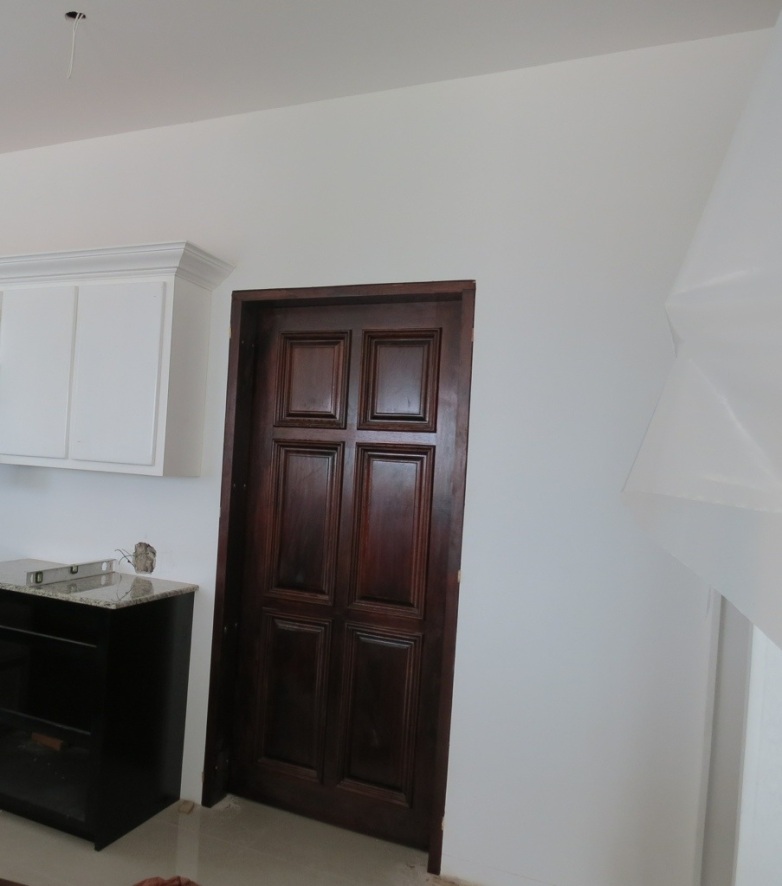 was in the process of fitting the architrave.

Out on the veranda we found Christopher busy applying the grouting for the skirting tiles. 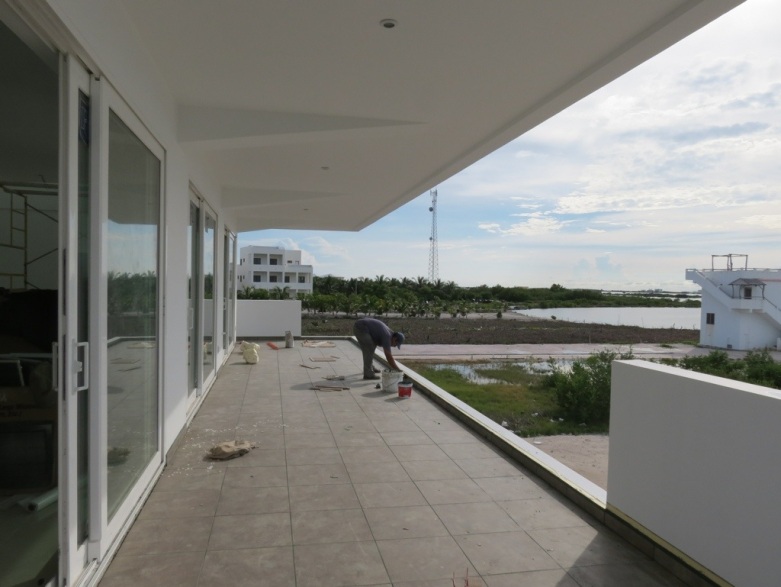 Christopher on the western (lagoon) side. 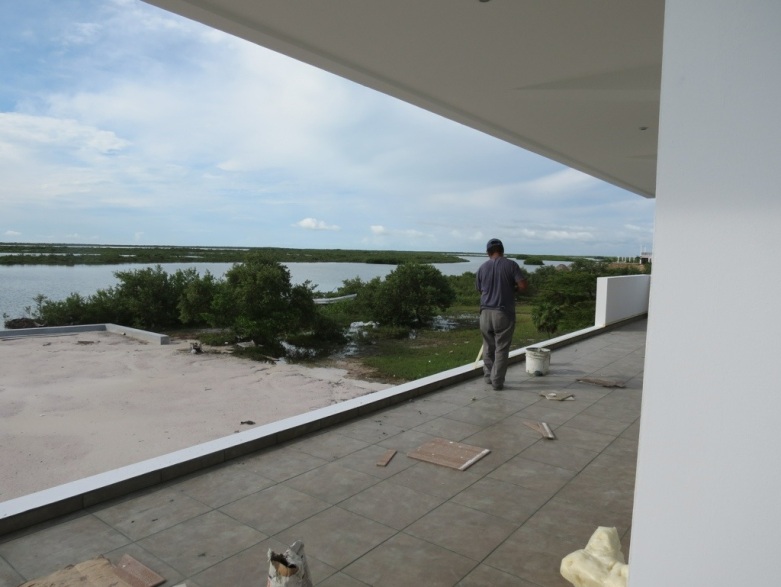 A close-up of the grouting. Neat isn’t it.

While we were out there we also saw that Rolando had been busy fitting the covers for the power sockets. 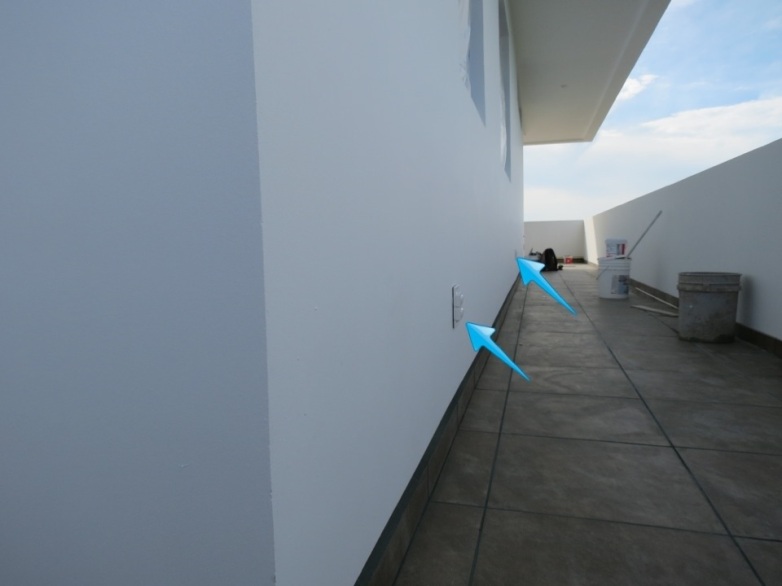 Going back in to the house we saw Rolando who asked me to let him know how high I want the tap fitted for the sink in my bathroom so we both climbed the scaffold and went up there. After positioning the sink I was able to (by virtue of miming washing my face – really pleased there wasn’t a video camera in operation!) tell him where I want it fitted.

My vessel sink will ‘sit’ on the countertop and the tap will come from the wall.

On leaving our build in Ambergris Caye, Belize we saw that the welder was making good progress on one of the corner railings for the Second Floor.

Red arrows show where the corner railings will be fitted.

I can’t publish this edition without mentioning the completely unexpected surprise we got in the evening. We had just settled down to eat our dinner when there was a knock on the door. On opening it I found a guy standing there holding a flower arrangement. It had been sent for Rose by Peter Lawrence (aka Pedro’s Hotel) to wish her a speedy recovery. A really thoughtful gesture.

The photograph doesn’t do it justice. It is lovely.

The headline for today’s edition is based on the single released in 1981 by Grover Washington Jr and Bill Withers which reached number two in the US Billboard Hot 100.