I forgot to mention in the previous edition that when we met with Daniel Camal, our building contractor, we had told him that we had chosen someone other than him to build the fence for us.

Even though it was obvious that he was disappointed Daniel, being Daniel (and by this I mean a genuinely nice guy), proceeded to ask how we were going to have it constructed. When I explained what we had decided upon he very quickly suggested changes that he said would provide for a much stronger structure. During the course of our build in Ambergris Caye, Belize we have come to trust Daniel’s judgement/knowledge/advice so we are going to go with his recommendations. Little doubt that the adoption of them will increase the cost. But we will have a fence that is a lot stronger and one that should last a lot longer.

After a morning taking care of various bits and pieces Rose and I went to Estel’s for lunch – shrimp omelette for me and a burger for Rose (no photos because quite honestly I wanted to eat my lunch and not delay this whilst taking photos of it – inconsiderate/selfish ? You bet) – and after finishing it we went straight to our build in Ambergris Caye, Belize and got there shortly after 15.00 hours.

Driving in to the lot we saw that the welder had really made good progress on the railings for the western (lagoon) side of the First Floor. 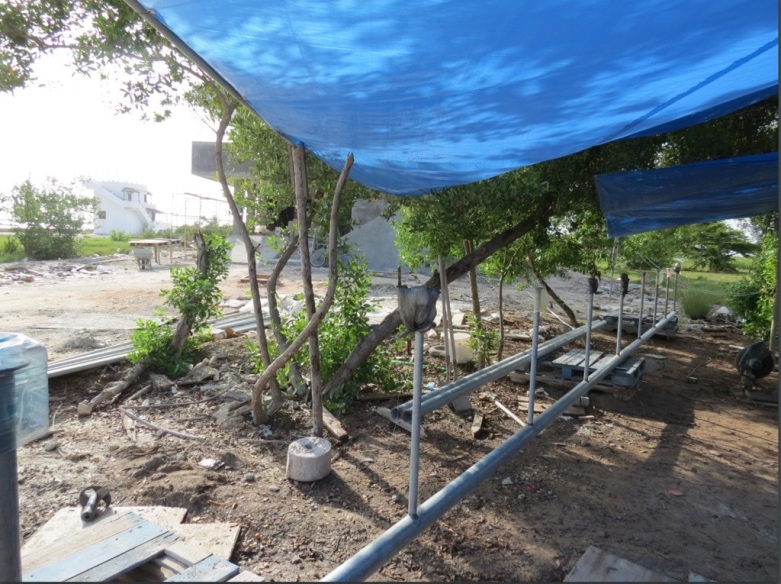 Walking towards the house we noticed that a new workbench had been constructed out of some of the pallets that the tiles had been delivered on. 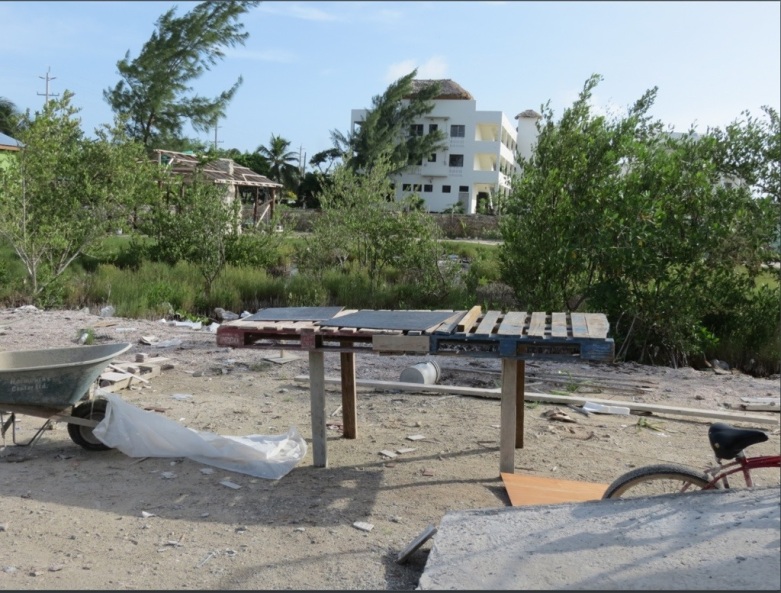 As the Yorkshire saying goes “waste not want not”.

Up the stairs to the First Floor and we found Angel and Alfredo applying the grout for the floor tiles in the hallway. 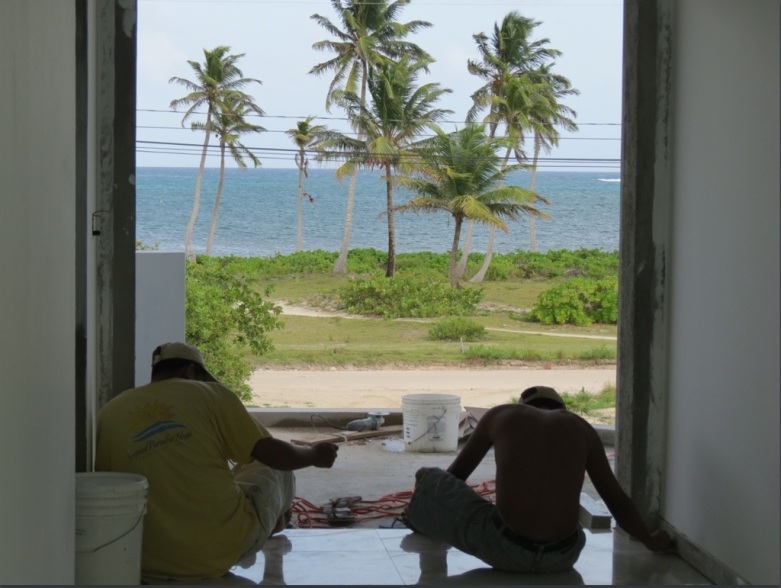 Angel on the left, Alfredo on the right. 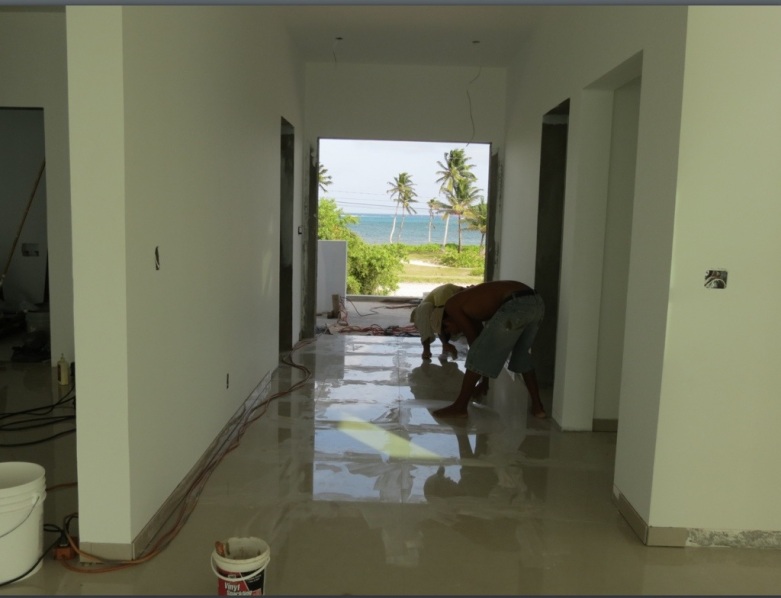 Working their way down the hallway.

As we carefully worked our way around them we heard the sound of an electric drill/driver at work and as we entered the main area we could see why. The kitchen cabinets were being fitted. 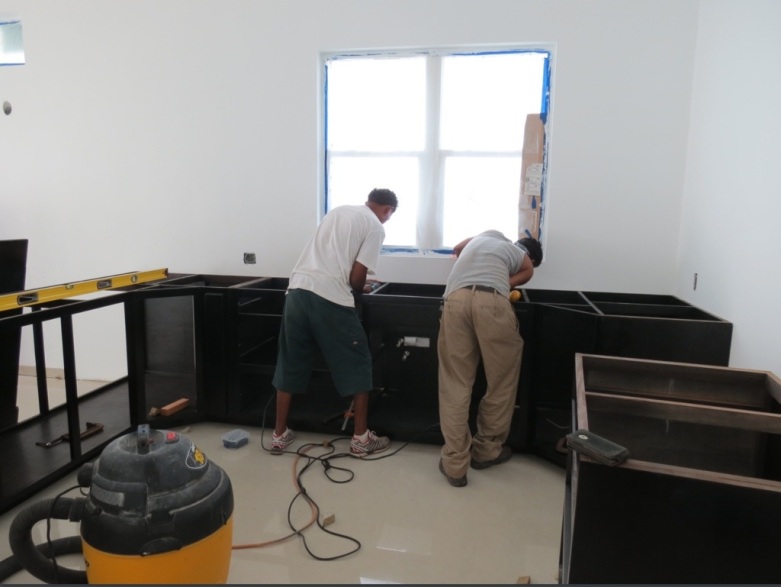 Screwing it in to position for where the sink will go. 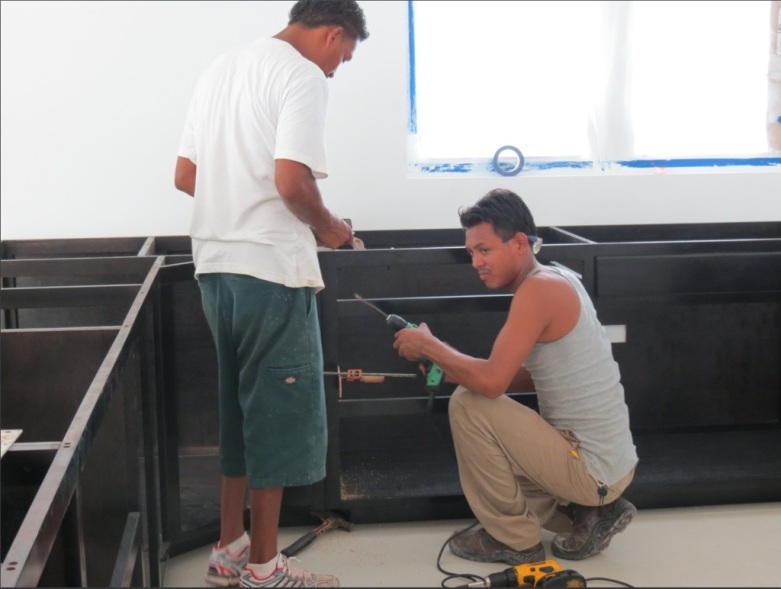 Moses (brother of Angel and Nicholas) ready to put the next screw in. 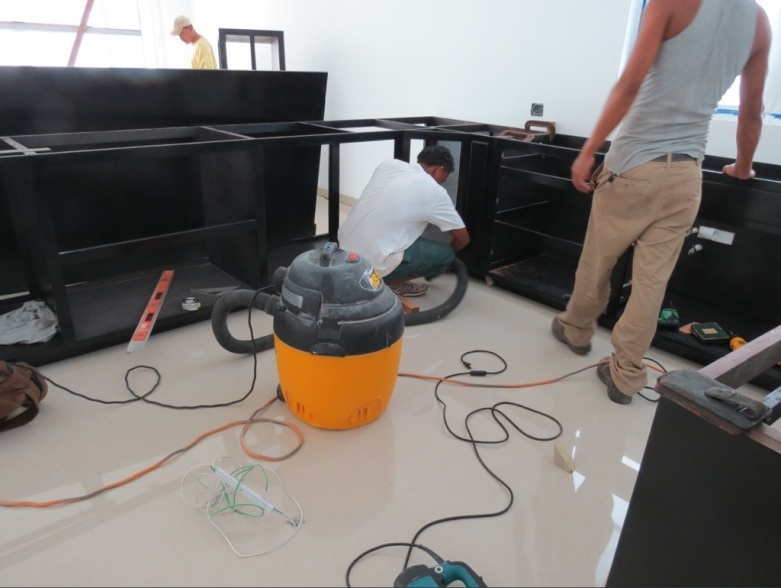 His colleague clearing up the sawdust after him.

With the cabinets being installed the kitchen is starting to take shape and is fast becoming my favourite part of the house. So much so that I just know that when we eventually get around to entertaining you’ll always find me in the kitchen at parties.

The excitement was too much for us (a little bit of exaggeration here) so we took a walk out on to the veranda and saw that – before starting on the grouting- Angel and Alfredo had applied the first coat of emulsion to the northern wall. 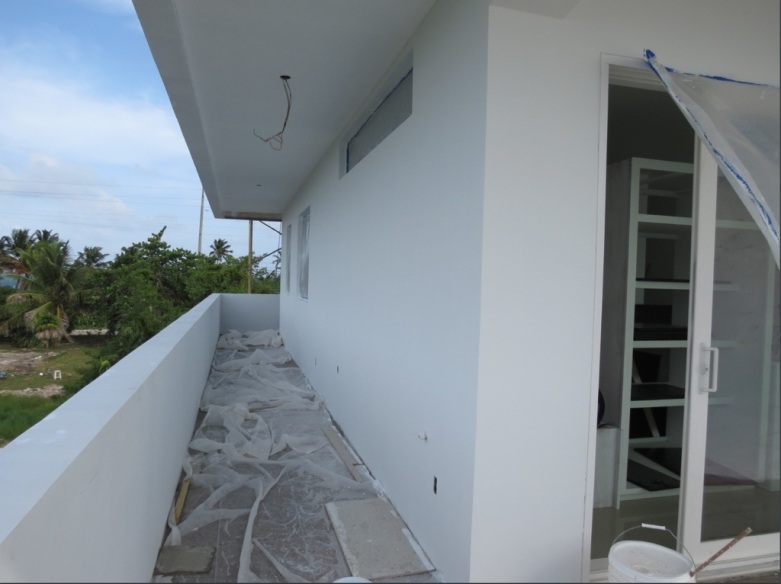 Not far away from us was Manuel laying floor tiles in the south-western corner of the veranda. 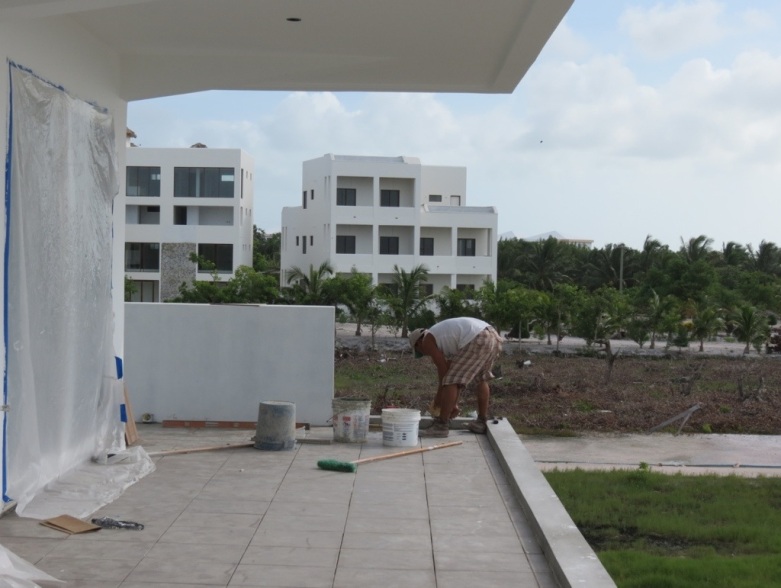 Getting the gradient right so that rainwater runs away via the pipes set in the veranda wall.

Back in to the house and up the scaffold to the Second Floor where Christopher had made a really good start in applying grout for the top of the skirting (base) tiles. 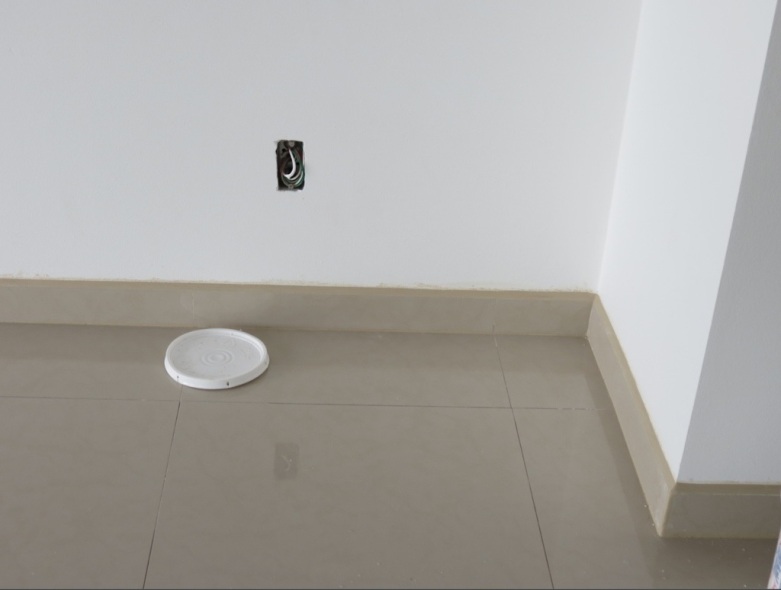 Grout applied. A really good match (well we think so) for the tiles. 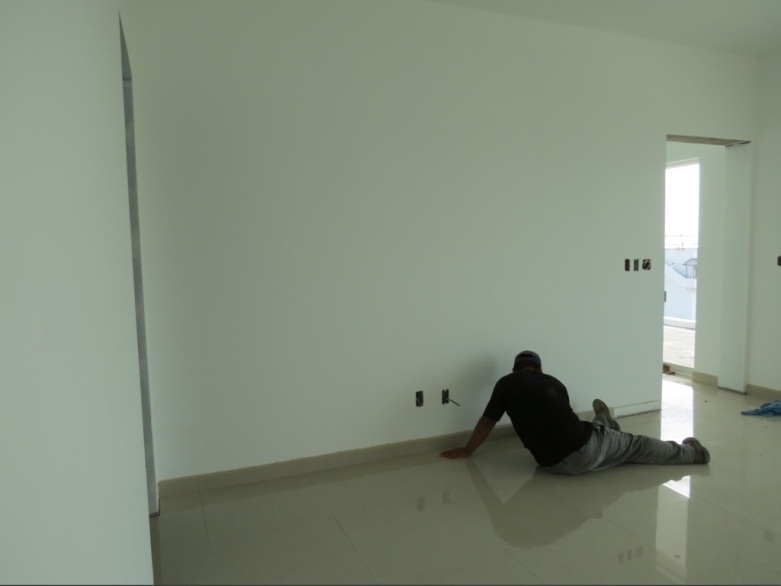 Christopher smoothing the grout with a fine sponge.

In to my bathroom where I found Ernesto and Appolito applying grout for the wall tiles and the skirting (base) tiles. 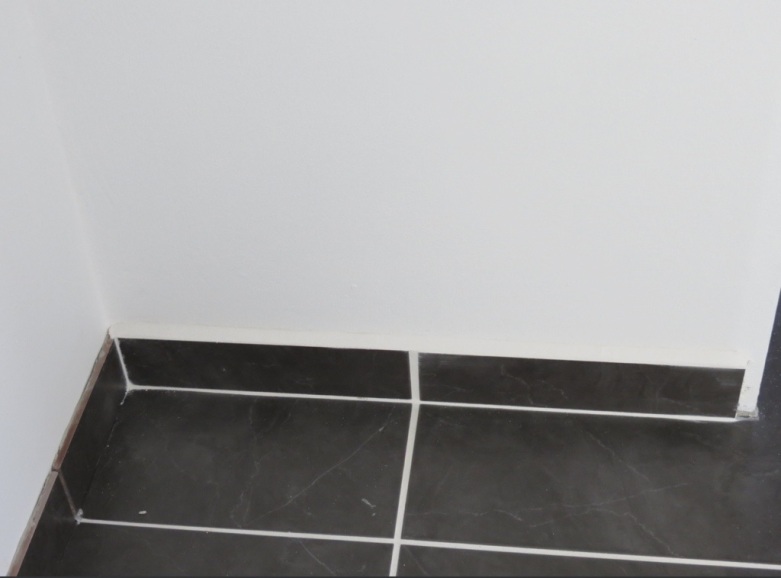 Started grouting the skirting (base) tiles in my walk-in closet.

It all looked very good but the kitchen was where the ‘action’ was so down the scaffolding we went and just in time too because they were about to start putting the breakfast bar in place. 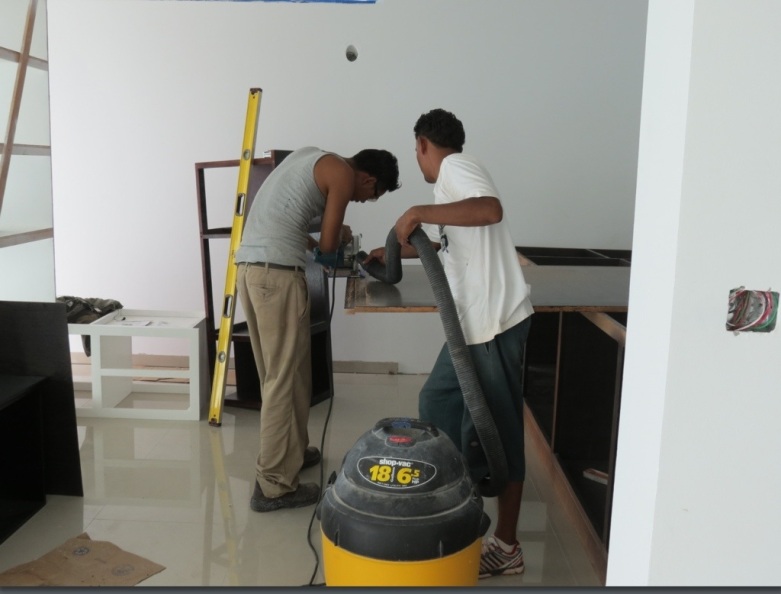 Cutting the board to fit. Vacuum in action. 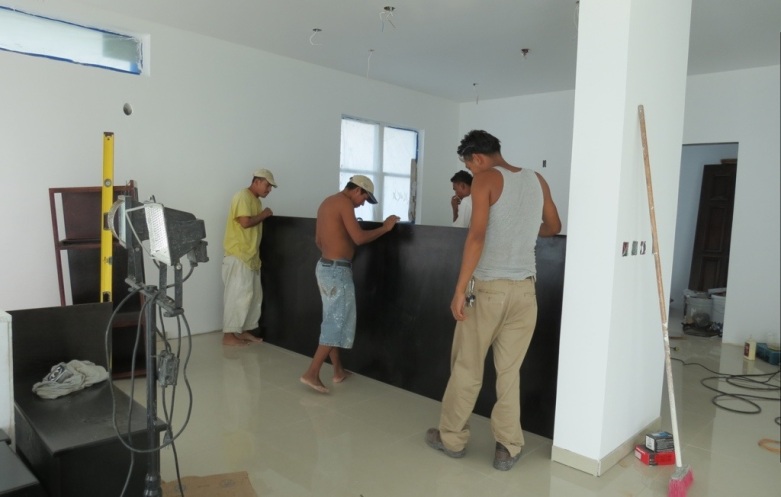 The headline (another challenge set by David Greene an ex-colleague in the UK) for today’s edition is based on the single released in 1980 by Jona Lewie which reached number sixteen in the UK Singles Chart.