When started out on this blogging lark I did so (as I have mentioned previously) as an easy means of accomplishing a few objectives. I wanted to record our build in Ambergris Caye, Belize. It would be a relatively easy way (or so I thought at the time) of letting family and friends know how we were ‘doing’. And it would give me something to do. A routine in my life. And a routine that required a degree of discipline by me.

Well, nearly ten months on from when I started the blog I am pleased to say that as far as I am concerned it has met the objectives I set for it and myself. Rose and I definitely have a (comprehensive) photographic and written record of our build in Ambergris Caye, Belize. With the blog there’s always something there to remind me of the experience. It has also proven to be an extremely good medium for keeping our family and friends up-to-date with how we are faring. And (trust me on this) it has given me something to do!

It’s given me so much more though. A true sense of achievement. Keeping the brain (yes I do have a brain – just that some of you (ex colleagues this is specifically ‘aimed’ at some of you) may not have witnessed it being engaged too often) active. Readers (using social networking jargon I will be so presumptuous as to say ‘followers) that live close and and many thousands of miles away that I have had and continue to have the pleasure of engaging with and feel that I have really got to know.

It’s also given me (OK, I had to buy it) the first camera I have had since being a child. A reawakening of my competitive nature – I now find myself looking to see how many Views an edition gets and feeling disappointed if the numbers drop. I think it may also have given me a mild (well, I hope it is mild) form of RSI.

Forgive me my musings, I will now get back on subject – our build in Ambergris Caye, Belize.

It was a grey, overcast and drizzly morning and I must admit that I was disinclined to do a great deal. So I didn’t. That is aside from going out to get a loaf and some eggs for breakfast.

I did get a phone call though, from Benny’s, asking if we wanted our appliances to be sent over on the barge from Belize City. The question was asked of us because we are experiencing stormy weather at the moment and the sea is a bit rough so there was the potential of damage to our goods in transit. I told them to hold sending our stuff until next Tuesday’s barge. It’s not as if we need the oven yet!

On our way to our build in Ambergris Caye, Belize we stopped off at Krystal Shipping in Pescador Drive to meet with Abel Guerrero Jr ( for those of you who frequent Fido’s he is Kristian’s Dad) to try and negotiate a discount for shipping the wood for our fence from Belize City to Ambergris Caye and then have it delivered to our lot. Didn’t get as much off as I would have liked (do you ever?) but I did get a reduction (knew those ‘negotiating skills’ training sessions I was put through would eventually pay off!).

Feeling relatively pleased with ourselves we got to our build in Ambergris Caye, Belize at around 15.00 hours to meet with Daniel Camal, our building contractor, to run through one or two things.

We had noticed when some doors had been delivered that one of them was a different colour to the rest. Not what we had asked for! All doors, whether interior or exterior, were (are) to be the same colour. 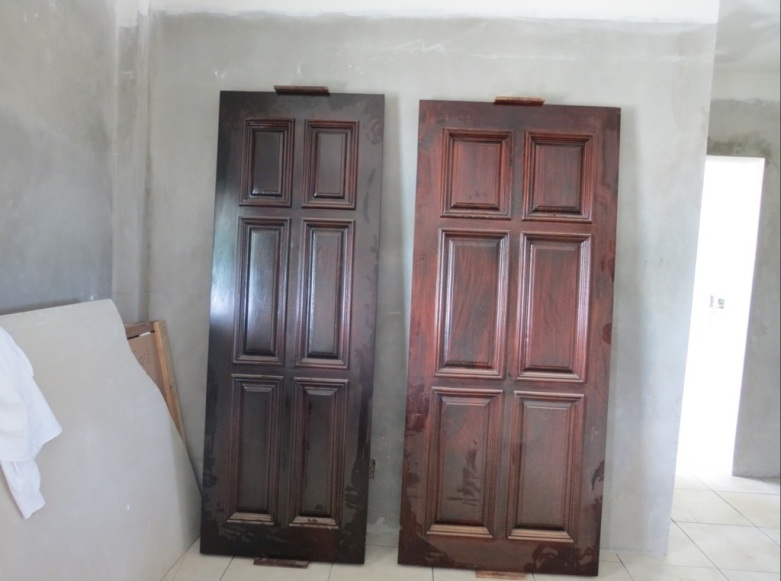 Spot the difference. The one on the right is wrong. It will be though. Right, that is.

Daniel then showed us the cement colouring that he has come up with for the open area on the Ground Floor and the veranda/roof terrace on the Second Floor. He had red, brown and buff. We like the buff but have delayed making a decision until he gets the other samples he is waiting on.

He also confirmed that sealant (a suggestion/recommendation made/raised by Julian in a Comment a few days ago) would be applied to the grouting. In fact he appeared surprised that we would think otherwise.

We then let Daniel know the grout that we have chosen for the Verde stone tiles that are being laid on the First Floor veranda and the entrance stairs (oh, and the veranda and steps for the bedroom on the Ground Floor). We have chosen Misty Pine.

With our meeting complete Rose and I then took a quick tour to see what progress had been made and started off on the Ground Floor where Wilson had finished laying the floor tiles for the en-suite bathroom for the smaller of the two bedrooms. 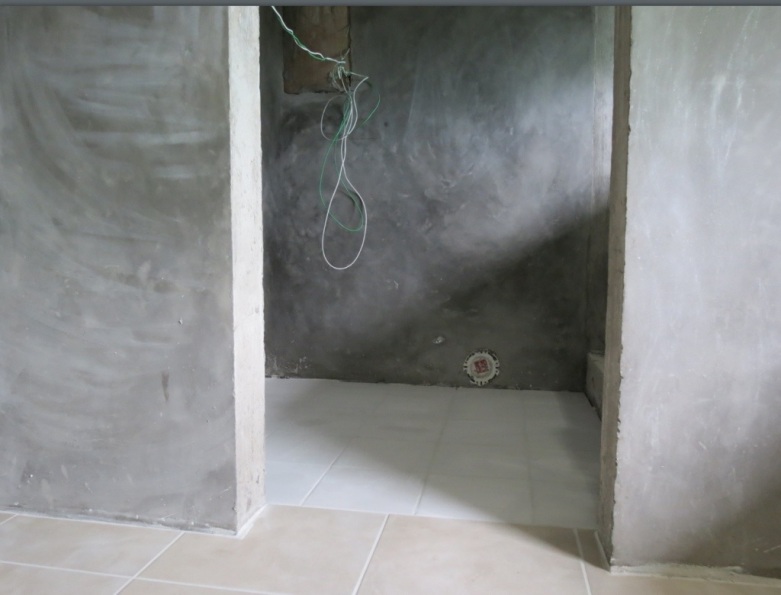 And grouted too. Shower cubicle (walls, floor and step) to be tiled next!

Up to the First Floor where Christopher had finished fitting the skirting (base) tiles for the Powder Room. 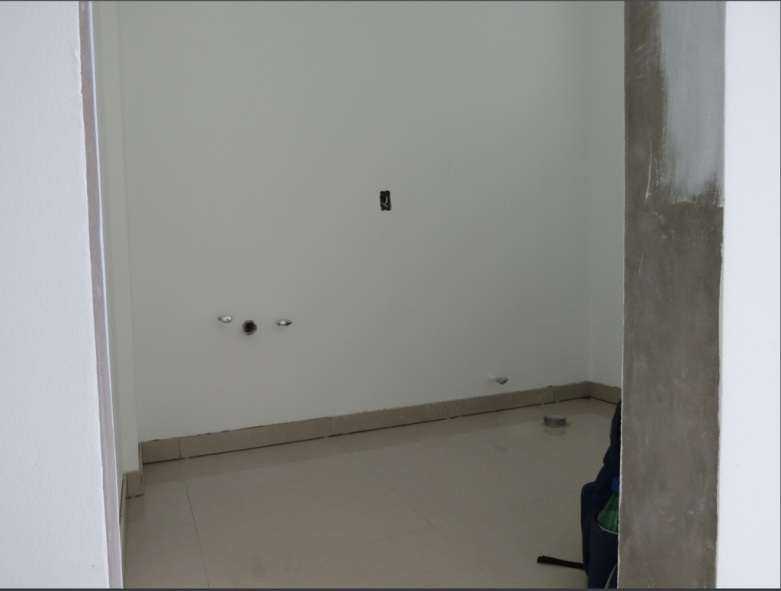 In the dining/kitchen area we saw that more cabinetry for the First Floor kitchen had been delivered (good old Moses and his team). 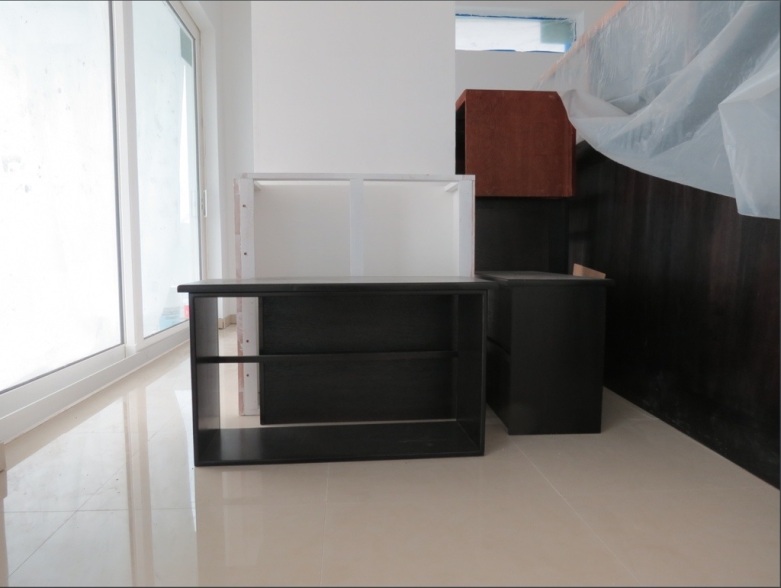 Drawers (for pots, pans, etc) for the base cabinets at the front and wall cabinet (white) for above the refrigerator behind them.

Not far from us Alfredo was on his haunches applying grout for the Milan Super Crema tiles. 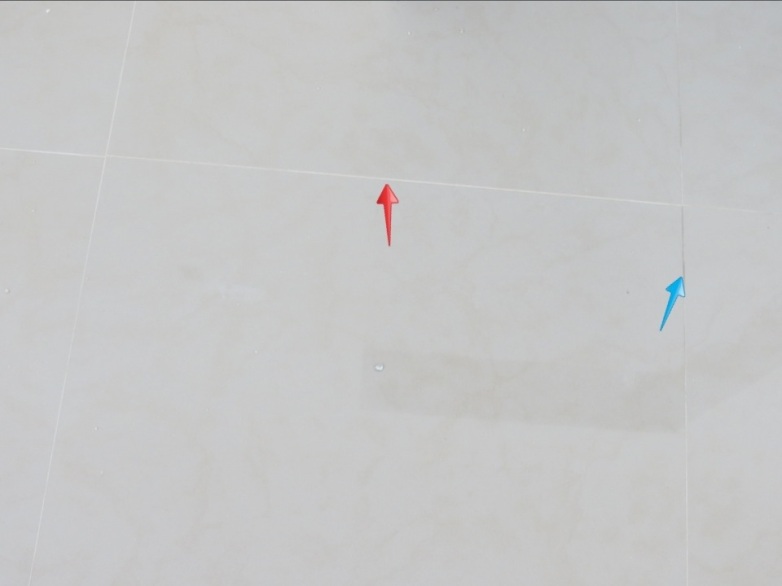 Difficult to see but the red arrow indicates where grouting has been applied and the blue arrow where it needs grouting.

Out on the veranda Manuel (we found out his name yesterday) had moved around the house and was making really good progress on laying the floor tiles for the southern side. 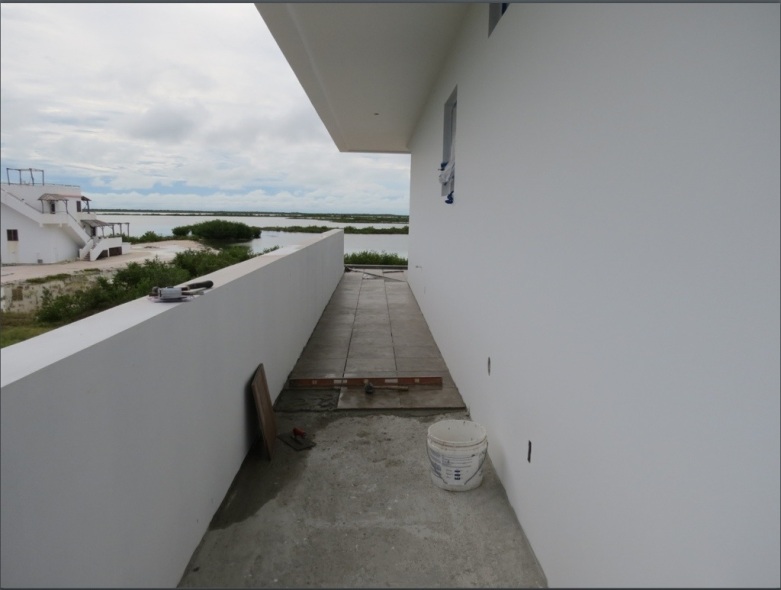 When talking to Manuel we were able to confirm (Anton posted a question about this) that the reason the tiles are cut and laid at a forty-five degree angle in the corners is to be able to create the right gradient to allow rainwater to run away via the pipes set in the veranda wall.

Up to the Second Floor where Ernesto and young Appolito were continuing work in my bathroom. 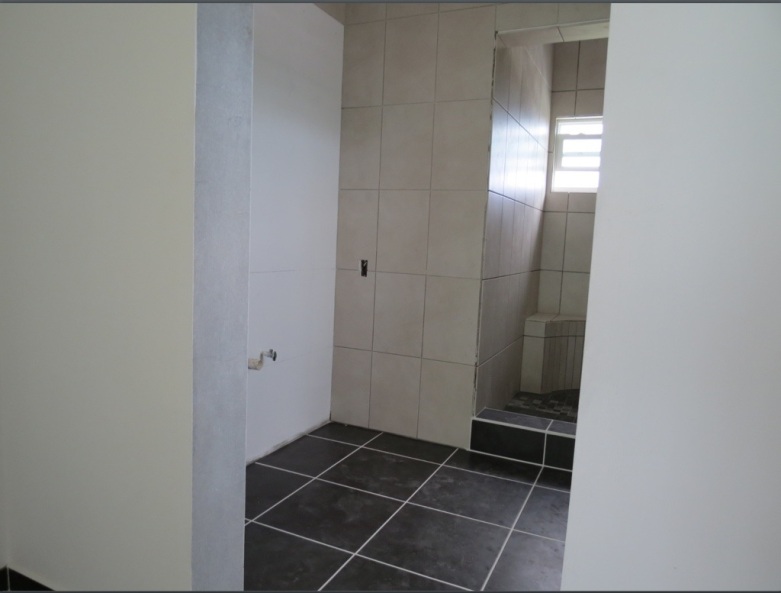 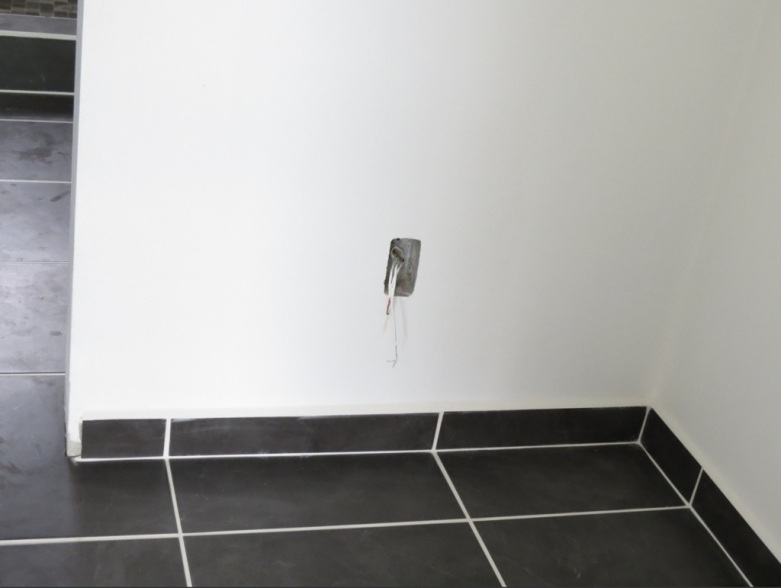 Floor tiles grouted and the skirting (base) tiles fitted in the southern side of the walk-in closet.

On the way out we stopped off to see what Edgar (the granite man) was working on. The first thing we noticed was that he had erected a ‘roof’ for his work area to shelter him from the rain. 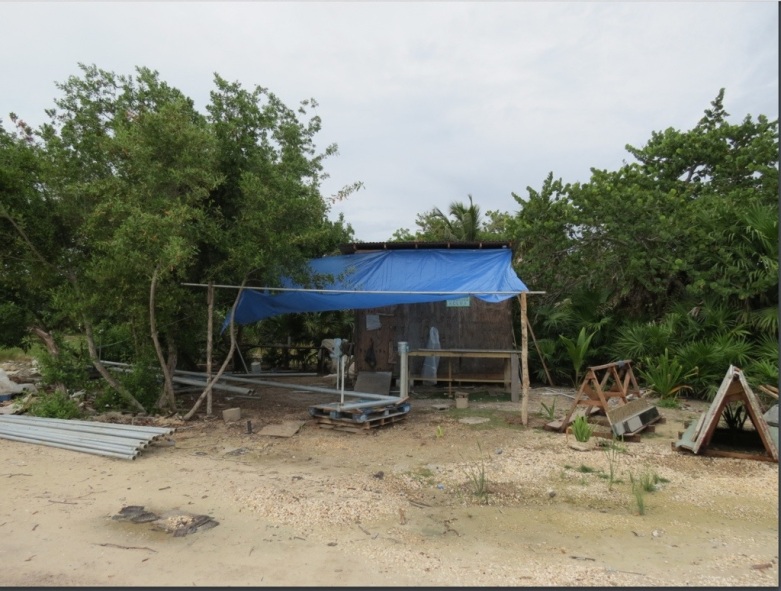 Under cover he was working on the back splashes for my bathroom and had started work on the top for the kitchen island/table for the Ground Floor self-contained apartment. 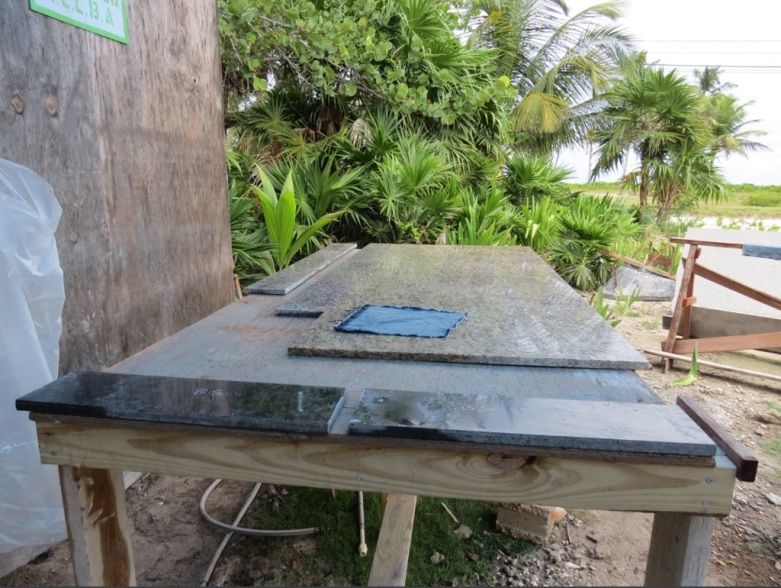 Back splashes for my bathroom (obviously!) at the front.

On the way ‘home’ Rose and I felt that we just had to stop off at Carlo & Ernie’s Runway Bar & Grill for a debrief meeting (believe that and you will believe anything). Whilst we were there Rose’s attention was taken (perhaps I was boring her?) by the skyline. 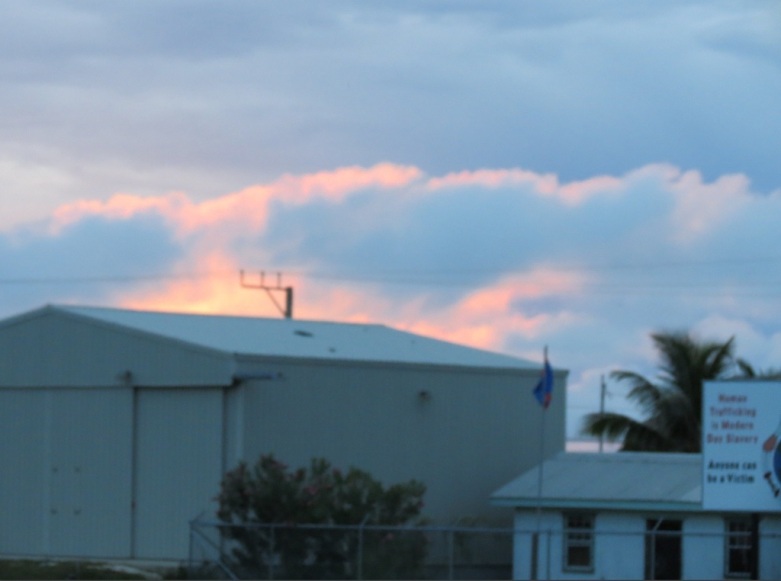 The photo really doesn’t do it justice.

The headline for today’s edition is based on the 1964 recording by Sandie Shaw which reached number one in the UK Singles Chart and number fifty-two (it was bettered by Lou Johnson’s version) in the US Billboard Hot 100.