Regular readers of this blog may have wondered why there were no editions for the last few days. Very simple reason really. I took some days off because Rose and I went to spend a night in Chetumal, Mexico.

We set off on Thursday morning when we caught the 8 am (well, it didn’t actually depart until 8.30 am) San Pedro Water Jets International service.

We booked a return ticket at BZ$150 a ticket but because we were only staying one night we would travel back to San Pedro via Belize Express Water Taxi. The two companies operate the service on alternative days . Both companies operate the Chetumal to San Pedro route with a scheduled departure of 3 pm and only a slight difference in timing between the two for the San Pedro to Chetumal service with San Pedro Water Jets International scheduled to depart at 8 am and the Belize WaterTaxi service scheduled to depart at 7.30 am.

Both companies work together to cater for customers such as Rose and I who, because of our travel plans, wanted to use both companies’ services for our trip. Nothing could be easier to book a ticket to ride from Ambergris Caye to Chetumal.

In addition to the ticket price -depending upon your status eg visitor, resident, Belizean, “QRP”,etc- you have to pay BZ$10 Belize Port Tax per person for each leg of the journey and may have to pay (status determines this) an Exit Fee Tax of BZ$ 37.50 per person (we didn’t because of our “QRP” status). You also have a fee of BZ$ 55 ($295 Mexican Pesos) per person Mexican Immigration Tax.

It takes around ninety to a hundred minutes to complete the coastal journey.

You need to allow around a further thirty to forty minutes to have your luggage checked (by a sniffer dog) and to pass through Customs. Once clear of Customs it took us only five minutes in a taxi to reach the Los Cocos Hotel where I had booked our one night’s accommodation for the equivalent of BZ$ 114.

It’s a reasonably priced, clean and well appointed hotel that is centrally located so that you never need to spend much more than the equivalent of BZ$ 3/4 wherever you want to go in Cheutmal.

Rose and I dumped our bags (a small back pack each) at the hotel and then headed off to visit the Walmart and Chedraui stores in the Plaza Las Americas. Oh, and the Burger King for lunch. I know how to spoil Rose!

The stores have such a range of goods when compared to Ambergris Caye that it creates the feeling of being a kid in a sweet shop – you want everything! But you can’t.Why? Well because you have to pay tax on it if you take it back to Belize.

In the evening we enjoyed a very pleasant meal (Rose had spaghetti bolognese and I had sirloin steak) which we complimented with a nice bottle of Chilean wine.

The next morning (Friday) after a very filling (and inexpensive) breakfast at the hotel we spent a couple of hours at the Sam’s Club store marvelling at the prices (so low) for the goods on display. So, if you have masochistic leanings and live on Ambergris Caye this is the trip to take!

We took a taxi from the store to the ferry terminal cleared Immigration and Customs in both Chetumal and Ambergris Caye uneventfully and were back in our rented condo by 5.30 pm (we ‘gained’ an hour when we re-entered Belize).

Ambergris Caye to Chetumal. A relatively inexpensive trip to make which Rose and I found to be very enjoyable.

Whilst we were away though we did wonder what was going on at our build in Ambergris Caye, Belize so that when we drove up there yesterday afternoon we did so with a fair amount of excitement and anticipation. Well, we had been away for two days!

On arrival we went straight up the stairs to the First Floor and in to the en-suite bathroom (for Rose’s handicraft room) to find that the guys had applied the finishing coat of cement for the walls of the shower area.

And had finished the recessed shelf too!

On the northern veranda Porfelio had just finished cementing in the windows for the kitchen and the utility room. 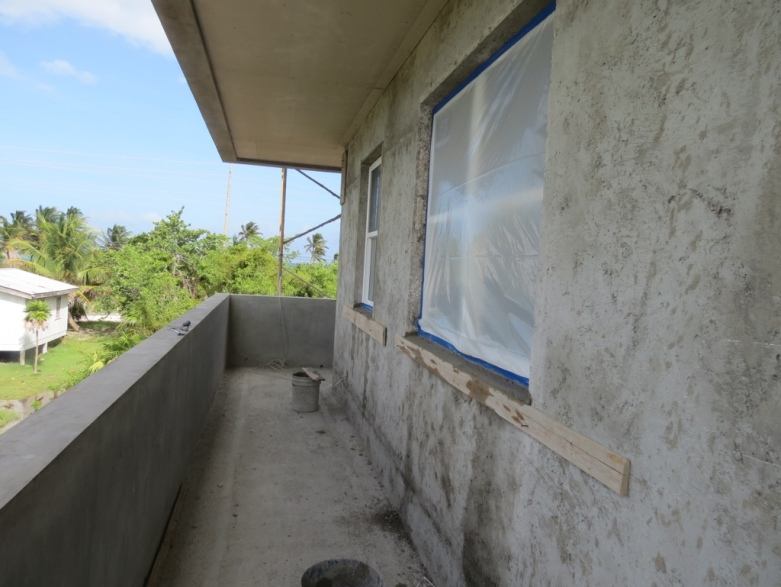 At the back (lagoon side) of the house they were just finishing off the floor where the sliding windows will very shortly be fitted.

We just knew though that the real changes to be seen were up on the Second Floor so we clambered up the scaffolding as fast as we could (taking care though of course).

Climbing up the scaffolding there was a paint like smell and as we reached the top we could see that the walls for our bedroom had ‘lost’ the cement colour. They were white! It wasn’t paint though. The guys had started applying the acrylic masonry sealant. 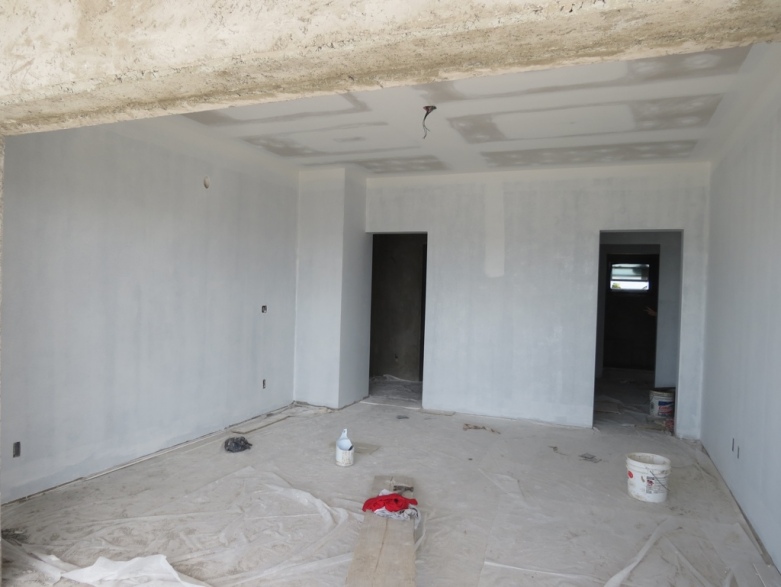 Hearing the sound of a roller we took a look in to Rose’s walk-in closet /bathroom where we saw Rafael (aka The Frog) at work. 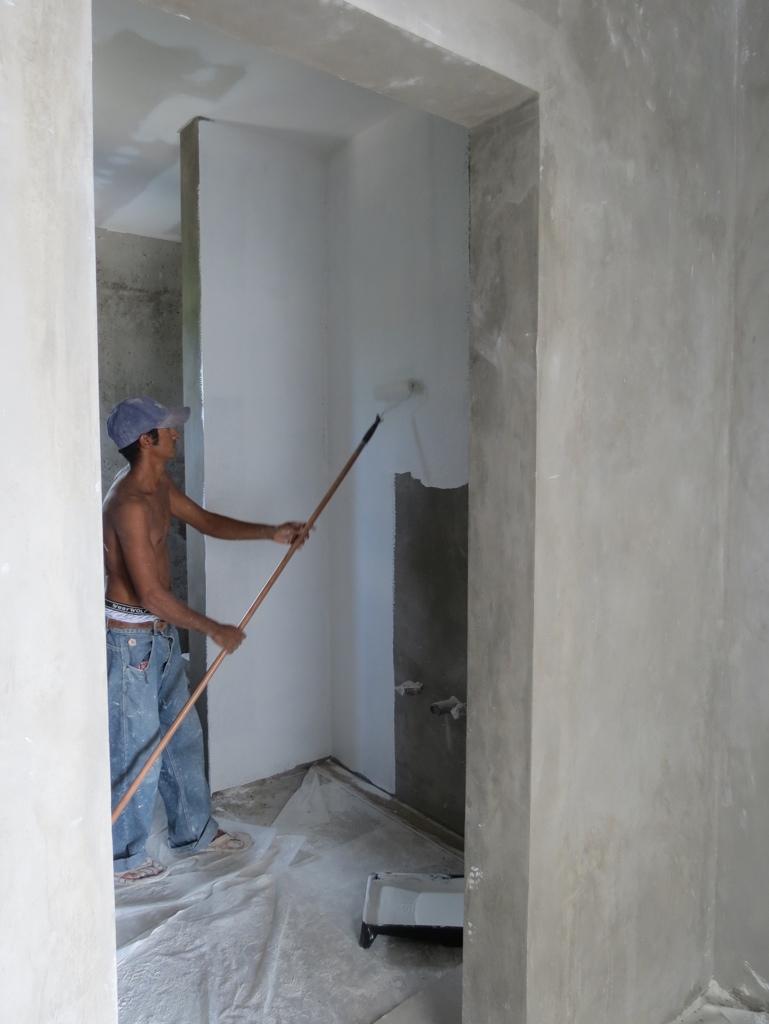 Outside on the veranda/roof terrace one of the guys (one that Rose and I have never seen before) was applying the finishing coat of cement for our table.

Only included this one so you can see the view we will get from our seating area just a few steps from our bedroom.

A walk around the roof terrace and we were really pleased to note that aside from the external walls where the sliding windows (western wall) will go all external walls had received their finishing coat of cement. 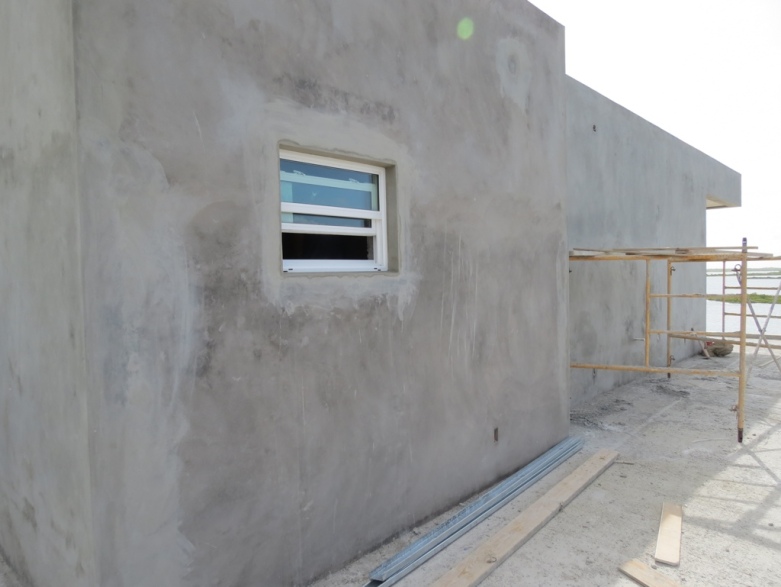 So much had been done and we had only been away from our build in Ambergris Caye, Belize for two days. We need to go away again!

Feeling extremely happy with what we had seen Rose and I headed home where we took a shower (separate ones!), got dressed and went for an extremely enjoyable night at the San Pedro 2013 Lobsterfest Block Party. Think(!!)we got home around 12.45 am.

Oh, the headline is based on the 1966 single (released as a double A-side with “We Can Work It Out”) by The Beatles which reached number five in the US Billboard Hot 100 and number one in the UK Singles Chart.