Another rainy start to the day (well the start of my day anyway) when I got up yesterday just before 05.00 hours.

The rain wasn’t strong enough to stop me from taking my mug of black coffee and iPad out on to the veranda. Well not initially at least. Time enough to scan read The Times on-line and make a start (a later than I wanted to) on yesterday’s edition of the blog. But then it changed and the rain really came down and the wind drove it in to the covered veranda. Time for a quick retreat in to the condo.

Being ever flexible in my approach to how I am going to spend any day I decided that I would shower, shave, etc and head to Estel’s for breakfast and finish off the blog there. I know that a short while ago I said I would try to publish by 06.30 hours but its not set in stone!

It was rainy when I set off from the condo we are renting during our build in Ambergris Caye, Belize so the raincoat came out (again) and when I got to Estel’s the tables that provide cover from the rain were all taken so I was ‘forced’ to sit inside. Not the biggest hardship in the world but not as good a view as you get from the ‘deck’ outside. There was a bonus though. With the view not being as good I did focus on the blog and managed to complete the edition, albeit a few hours later than my target time. 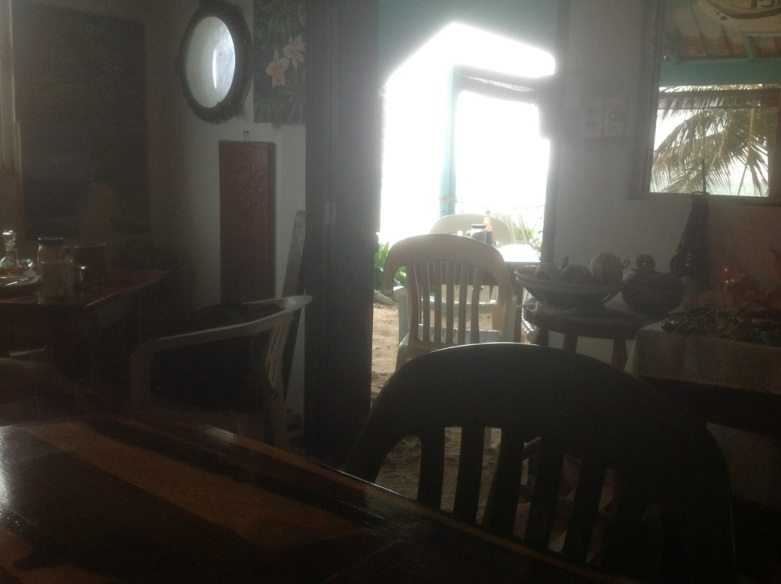 Beats a café in London.

When I got ‘home’ I spent some time taking care of emails with the most important being an exchange with Hyde Shipping which revealed that the cost of shipping a twenty foot container from Miami to Belize City will be US$ 1,335. Now just need to finalise what Rose and I will fill it with!

After a light lunch Rose and I headed north to visit our build in Ambergris Caye, Belize and pulled in to our lot around 15.30 hours.

Our inclination was to go straight up to the First Floor to see how work on the internal stairs had progressed but we ‘forced’ ourselves first to take a look in the self-contained apartment on the Ground Floor to see if any further work had been done in there. We knew – because the granite for the kitchen cum table was still on the workbench in front of the house – that Edgar (the granite man) had not turned in for work again but that didn’t mean that other stuff might not have been done. And we were right because Rolando and Nicholas had started fitting the four inch diameter down lights in the kitchen/living room.

Some of the lights fitted.

Slightly larger but a good ‘match’ with the other lights.

Up the external stairs to the First Floor where we saw that the down lights had been installed in the bedroom (Rose’s handicraft room). 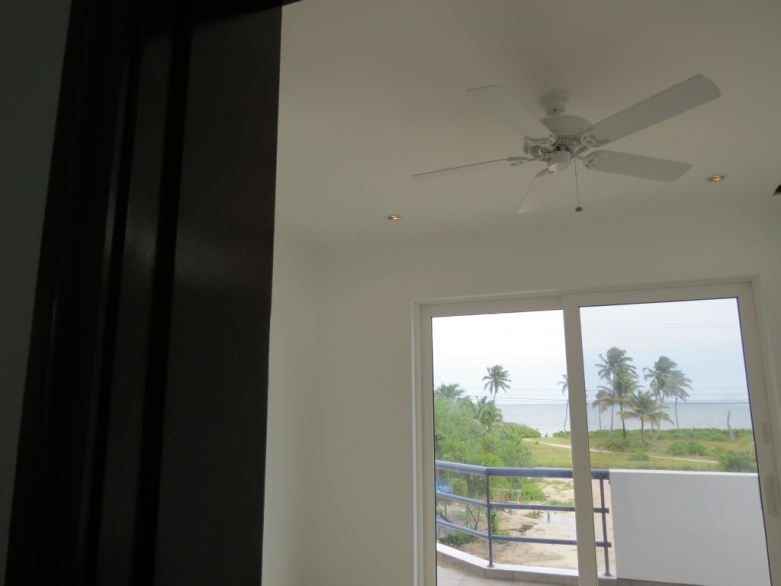 And in the Powder Room too. 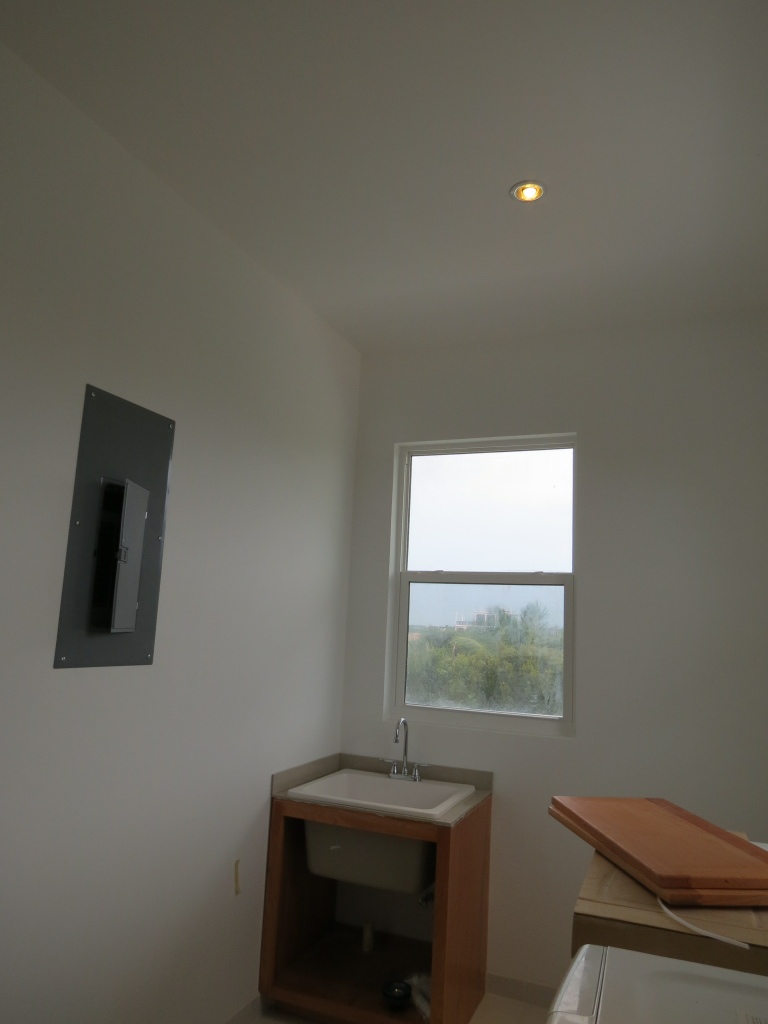 All very illuminating (sorry about the pun) but what about the internal stairs?

As we got to the end of the hallway we saw it. Victor and his son Michael had fitted the handrail and balusters for the top flight of the stairs.

We had got there just in time because – to provide better access – the scaffolding (which has been in situ for months – had to come down. 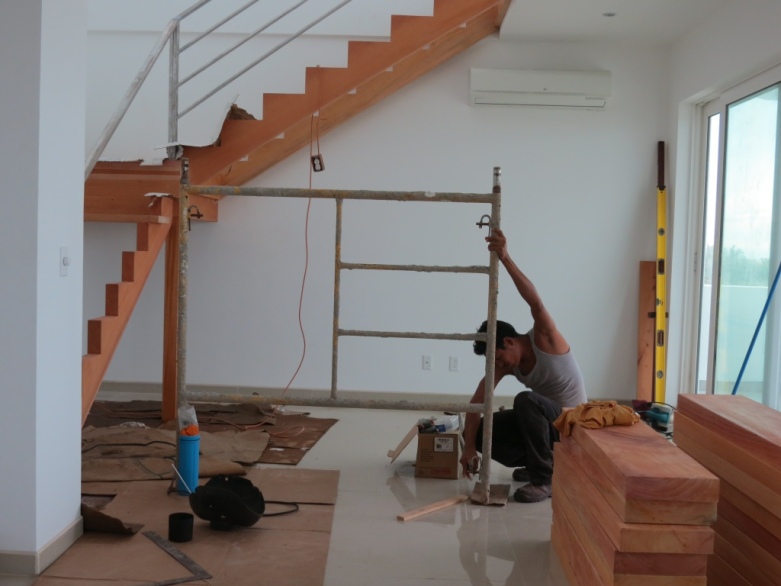 One section to go.

With the area cleared of the scaffolding Victor and Michael commenced installing the handrails and balusters for the first flight. 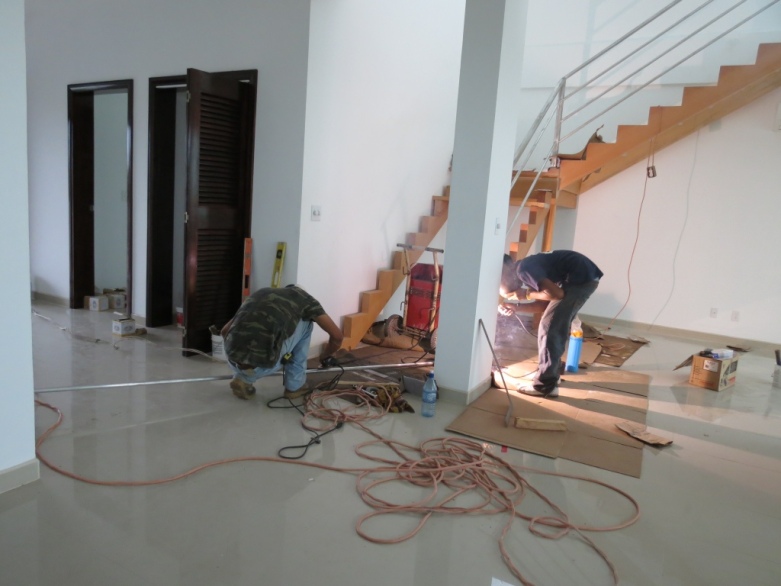 Last section welded in to place.

Seeing that the sun was about to set (two hours had passed since Rose and I had arrived) we went outside on the veranda).

By the time we got back inside the house Moses and his colleagues had nearly finished positioning the treads in place.

Although the treads still needed to be screwed in to position we could at long last see what the stairs are going to look like.

Looking down from the landing on the Second Floor.

Another view from the landing.

View from the First Floor. Nicholas trying out the stairs!

With this edition ‘out of the way’ I can now turn my thoughts and energy to making this a super day for Rose. Why? I ‘hear’ you say. Well because thirty-nine years ago today (I did say I am going to make it a super day!) she was born and I am determined that she has a happy birthday.

The headline for today’s edition is based on the single released in 1981 by Altered Images which reached number two in the UK Singles Chart.