My time on the veranda yesterday morning was very pleasant. The good, strong breeze made it very enjoyable

I spent a fair bit longer reading The Times than I usually do. Lots of coverage about Margaret Thatcher who sadly passed away on Monday.

She had her ‘lovers’ and her ‘haters’ and I am decidedly one of the former. Through her policies I and many of my ex-colleagues enjoyed some of our most enjoyable times working in the UK press industry.

Rose and I spent the greater part of the morning ploughing on with our searches on the Internet to make selections for the fixtures and fittings for our build in Ambergris Caye, Belize. It has been a laborious task but we are getting there. We now only have the light fittings to choose but we have narrowed this down and just need the advice of Daniel Camal, our building contractor, to make the final choices.

With the list drawn up – model number and price- and screen grabs for every item I took time out to reacquaint myself with The Litigators by John Grisham that I had started reading last week. For those of you who are fans of his but have not read this book yet it is up to his normal standards.

Fully relaxed we then had a quick bite to eat and set off to review progress on our build in Ambergris Caye, Belize and arrived there just after 2.30 pm. We have taken to getting there around this time so that the guys have had around three quarters of the day working on stuff.

The first thing we noticed was that the rebar frame for the base for the handrails for the lower level of the external stairs had been fixed.

Only needs the form now and it is ready for pouring.

The forms had been removed from the bases that had been poured the previous day and we can now see the stairs taking shape.

The top of the first flight. 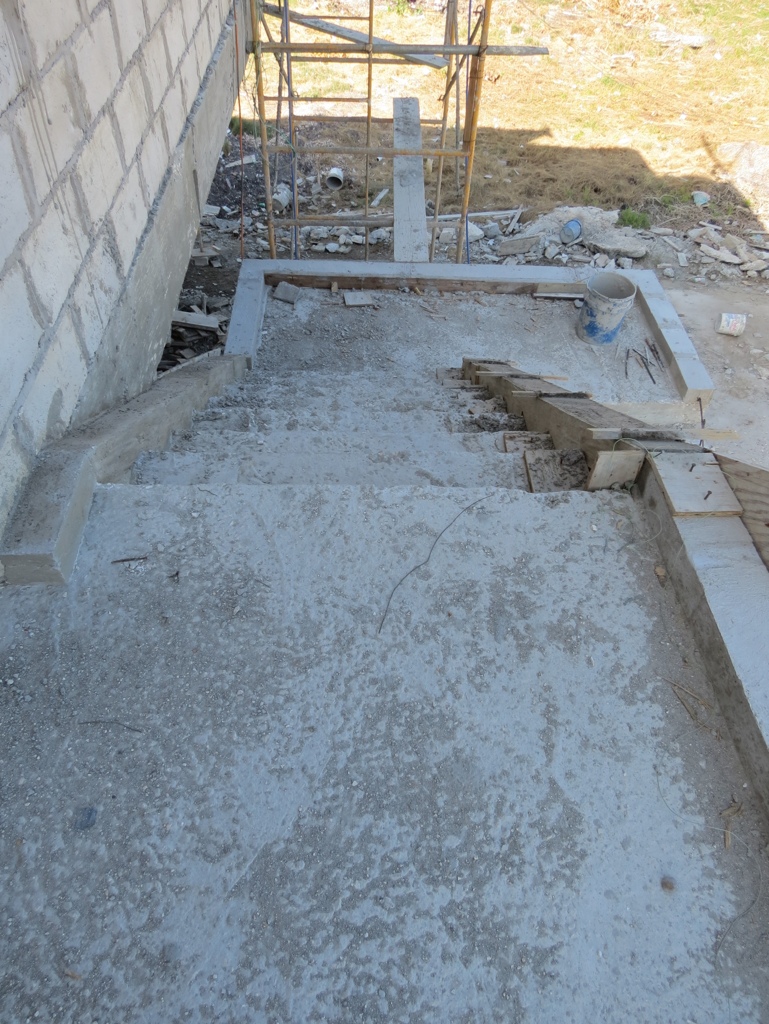 And for the second flight.

At the top of the stairs Porfelio was busy at the entrance (where the double doors will eventually be fitted) with a hammer and bolster knocking of the uneven bits of concrete before the next course is applied.

A walk in to the house and we could see that the plumber had been at work putting connections in place for the air conditioning unit in the dining room area. 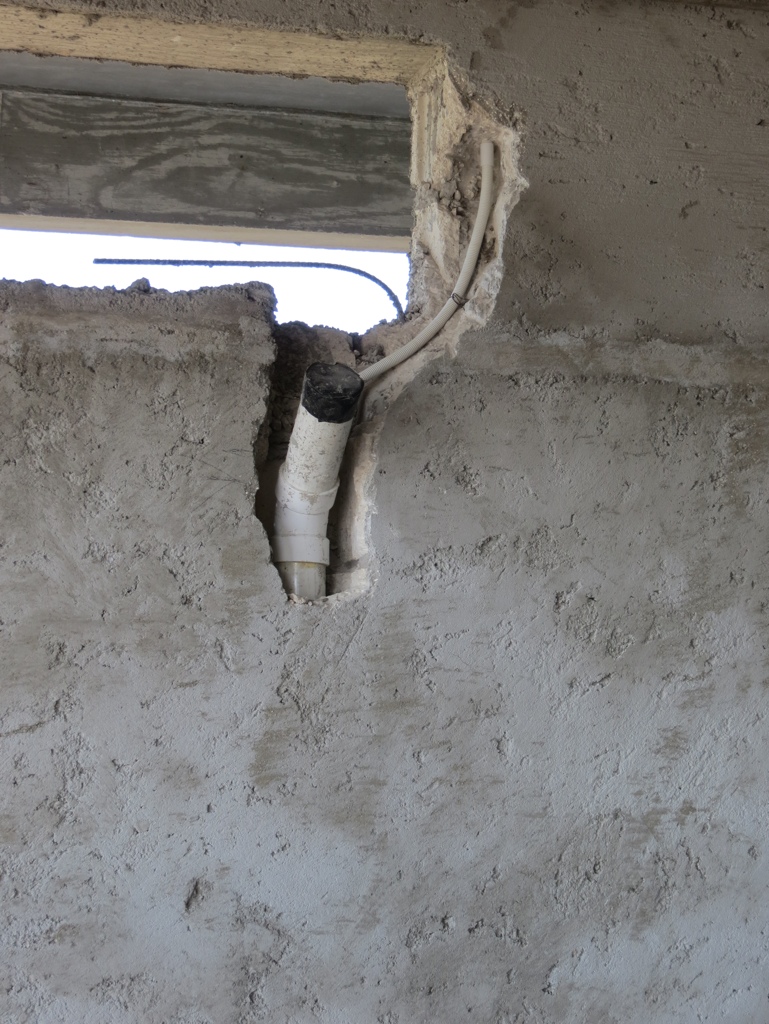 On the other side of the ‘room’ (the living room area) the lines had been ‘stuck’ for the next course of cement.

A few feet away the electrician (he is the plumber as well) was knocking off rough areas of cement around the electric boxes (for the light switches). 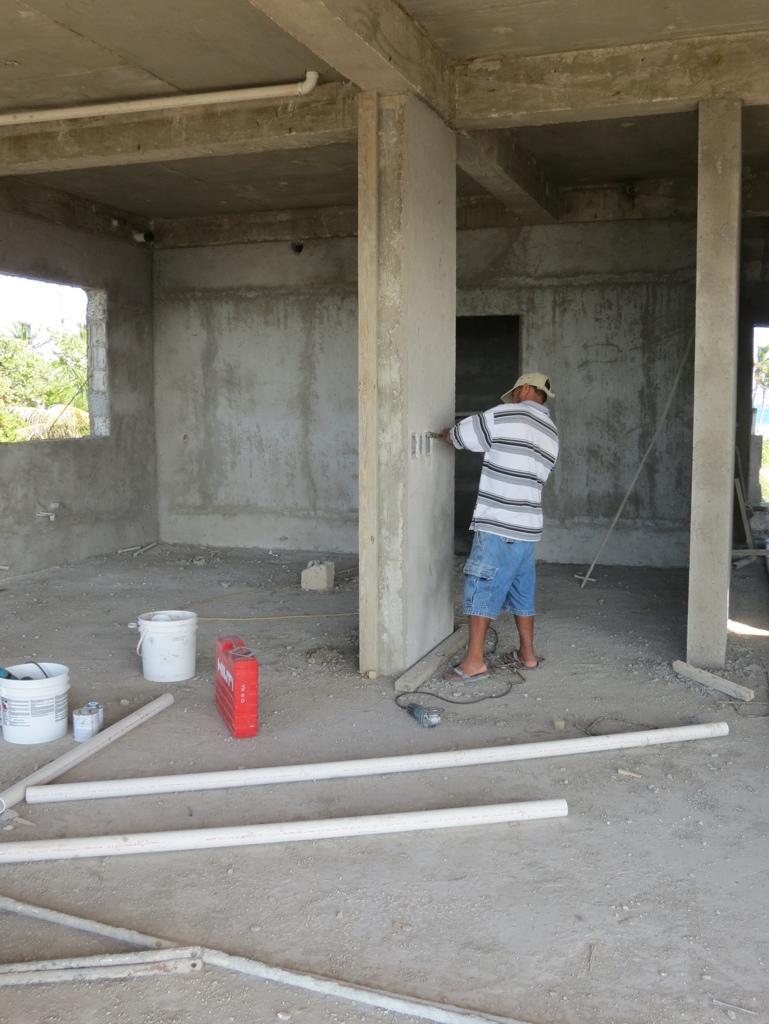 Around the front (eastern side) of the First Floor they were applying the second course of concrete in the bedroom (Rose’s handicraft room).

Angel knows the importance of this room!

Seeing that work was progressing well it was time to head up to the Second Floor where Zapeda has control ( they split the guys in to groups with each group having ‘ownership’ of their floor). Once up there I could see that they had started work on applying cement on to the Master Bedroom walls. 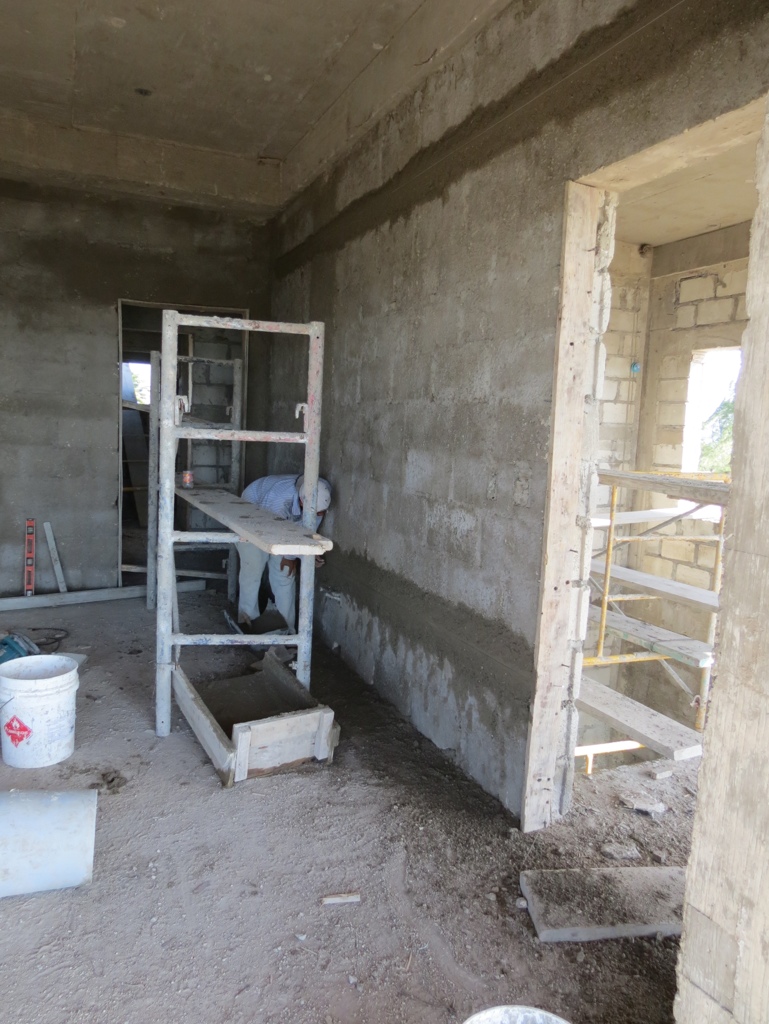 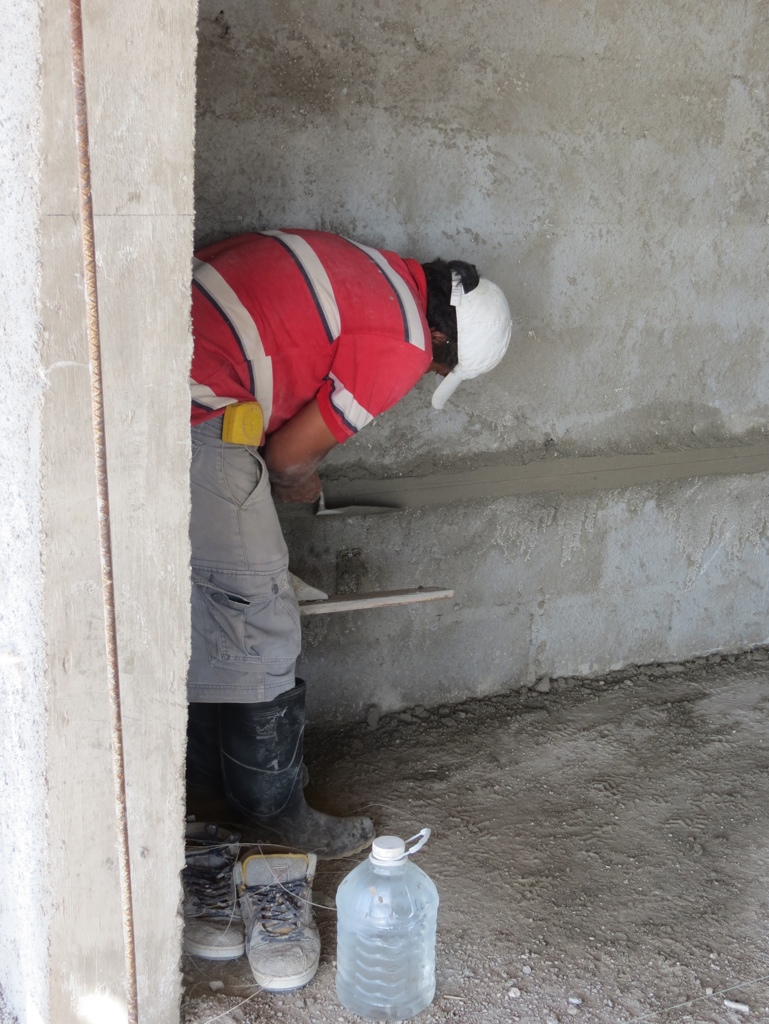 In the background Zapeda’s son Eric was screeding the walls in Rose’s walk-in closet.

Believe me they are Eric’s feet in the Wellington boots!

Everywhere I looked I could see that it’s getting better.

Satisfied with how things are going on the Second Floor it was time for a walk-around the Ground Floor and ground level (another team of the guys (primarily comprising Martin, Sam and Nicholas) have accountability for these areas). There I found Martin in the kitchen/living area of the self-contained apartment.

Fixing the levels for the next course of concrete for the columns.

Down below, in addition to and in between mixing the concrete for all of the teams Nicholas was busy removing uneven areas of concrete from the ground level wall.

The headline is based on the 1969 single by Cass Elliot which reached number thirty in the US Billboard Hot 100 and number eight in the UK Singles Chart.