Grey skies for most of the day with occasional showers didn’t augur well for work on our build in Ambergris Caye, Belize but given that I can do nothing to influence the weather I had a relaxing time reading the Saturday edition of The Times, a couple cups of coffee and a breakfast of two fried eggs on toast.

This filled up the time nicely until the Arsenal game versus Stoke City came on TV at 9 am. I would like to report that I had a thoroughly enjoyable time watching the game but I can’t. Arsenal didn’t play scintillating football and Stoke were as resolute and dour as usual. We got the three points though – courtesy of a deflected free kick by Podolski – and our new full back Nacho Monreal had a promising first game.

Pleased with the result I decided to pop down to the Police Station to see if our Criminal Record Reports had arrived from Belmopan (the capital of Belize). When I got there I asked for PC Cho and when he came from his office I sensed from the smile on his face that our ‘Reports were available. I was right because after handing over the receipts for the application fees (BZ$12 each) he gave me two ‘Reports. One for Rose and one for me.

What you call a ‘mug’ shot.

Now that we have got these ‘Reports which prove that we have not been breaking the law in Belize we can move to the next step in applying for QRP (Qualified Retirement Programme) which is taking a medical.

Very pleased to at long last get the Criminal Record Reports I returned home to collect Rose so that we could go look at what was going on at our build in Ambergris Caye, Belize.

When we arrived it was silent, too silent. No concrete mixer going. No hammering. What was going on? Had they stopped work? No, far from it because they were busy fixing ( for the haters out there I apologise) rebar in advance of the pour for the First Floor.

Even the ‘rebar haters’ must accept that it looks good!

The most important tool during this stage of our build in Ambergris Caye, Belize is a pair of pliers.

Look at those pliers at work.

Not as hard as when it comes to pouring the concrete but, nonetheless, back breaking work. Unless you use your experience like Anhill. 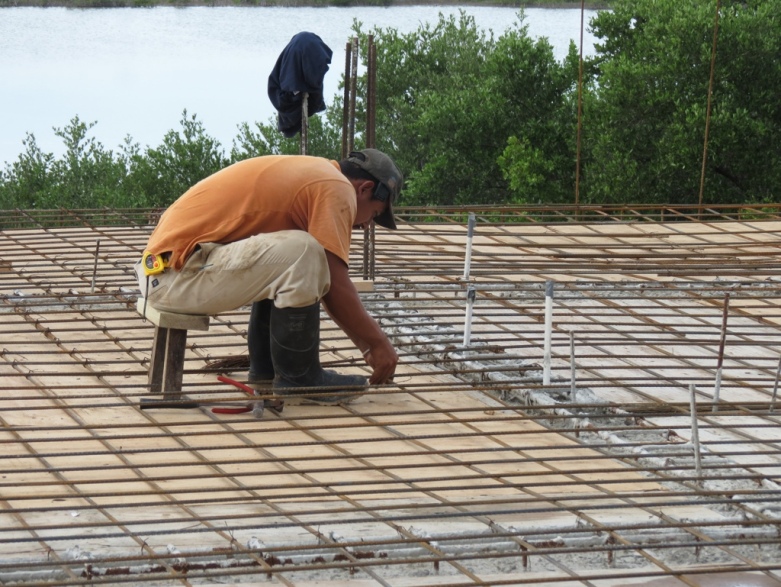 He might be sitting down on the job but…

When we were up on the First Floor we could see where they had marked out where the entrance doors would be.

Look closely and you can ( look hard) see where our double door entrance will be. 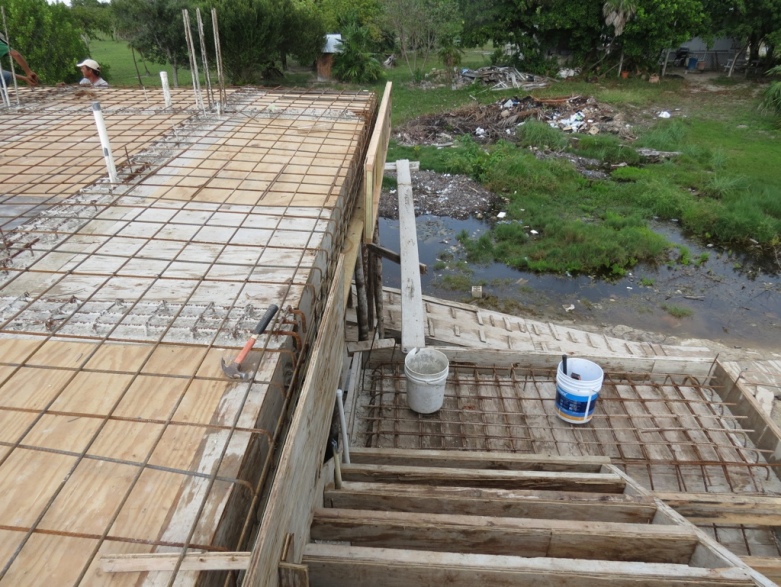 Ready for the pour.

We met Daniel Camal, our building contractor, while we were there and he told us that he plans to pour the concrete for the First Floor – providing that the necessary pipe work is completed by the electrician and plumber on Sunday – on Monday and would have thirty two guys on site to work two concrete mixers. Not long after he told us this a group of guys turned up looking for work. 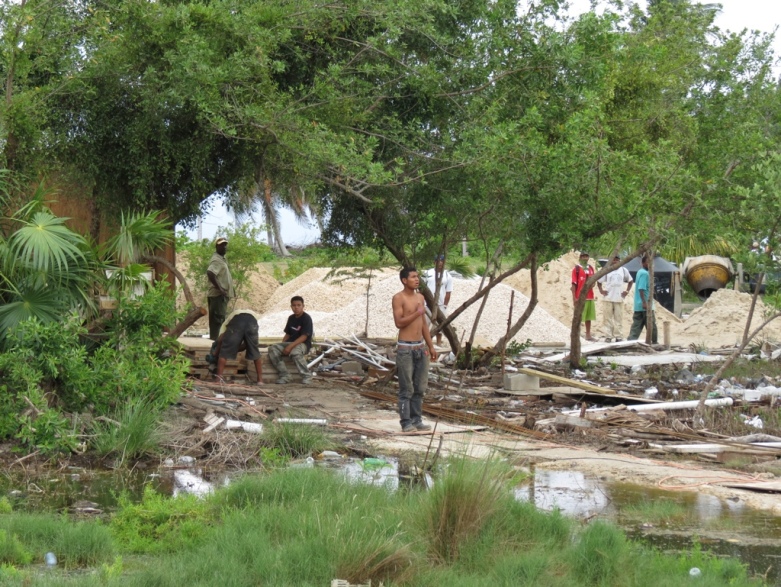 The guys that turned up are used for concrete pour days and look to see where sand, cement and shingle have been delivered. When they see these materials they know that that there is a chance of a day’s pay.

Before we left our build in Ambergris Caye, Belize Rose and I had a quick look at the exterior of the building.

And the western (lagoon) side too.

Rose and I will visit again tomorrow to watch the electrician and plumber in action.

The headline is based on the song released in 1980 by Judas Priest which was track three on the ‘British Steel’ album which made Platinum in the US and Gold in the UK.