No I am not about to go into a bout of impersonating Rod Stewart . Just thought it was a reasonable headline ( OK , naming convention) for today’s blog given that this weekend the Belize National Optimist Regatta takes place here in Ambergris Caye .

The two day competition sees 25 junior sailors in Optimist boats competing against each other in 3 races today and 3 races tomorrow to decide who will end up as the 2012 champion of Belize. Competitors came from Placencia Sailing Club, Belize Sea Scouts, Liberty Sailing Club, Buttonwood Bay, Belize Sailing Club, Corozal Bay Sailing Club and from the hosts, San Pedro Sailing Club.

Normally the young kids of Ambergris Caye train and race at Caribbean Villas and are put through their paces by ‘Commander’ Andy Milner ( fellow Brit) ably assisted by Forrest Jones ( from San Francisco) who does much in the background to help generate the necessary funding to ‘keep the show on the water’ for the San Pedro Sailing Club.

They, along with the help and support that they have had from parents of the children and local businesses, have done a tremendous job during the ‘Club’s short history. Of the 25 competitors this weekend 16 of them are members of the San Pedro Sailing Club.

The competition course is directly in front of Central Park which, not unsurprisingly given its name, is in the centre of San Pedro Town.

The organisers set up the control centre on the beach under a marquee. 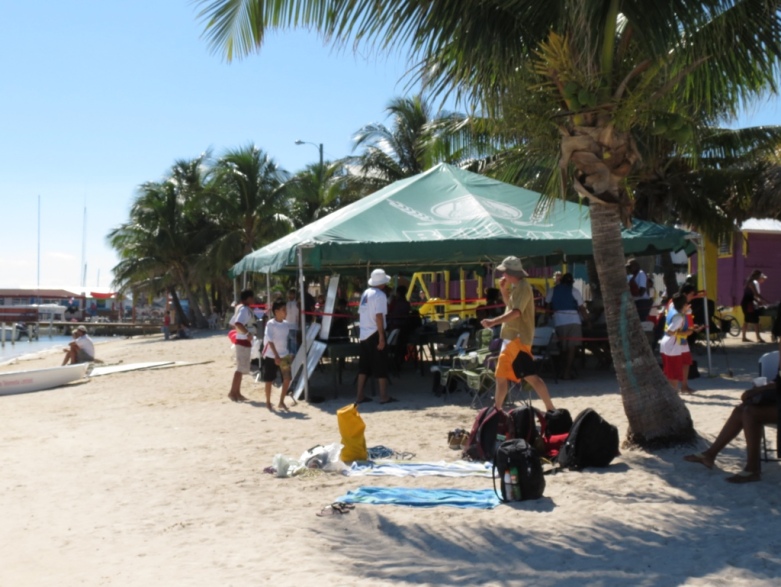 The boats line up for the first race.

All they want to do is be first over the finish line.

The chase for the finishing line.

Three races took place today and the San Pedro team took first pace in two of them with Jordan Henderson winning the first race and Kevin Velasquez taking pole position in the final race of the day. The second race was won by a Buttonwood Bay team member.

The championship continues tomorrow with the final three races, the first of which starts at 2 bells ( 9am for the less nautically minded).

Well, what did you think of the Mystery Blogger’s post yesterday? I found it amusing even though I was the target for the humour. I am thinking of making the Mystery Blogger a regular contributor ( it would at least give me a day off). What do you think? Good or bad idea?

My visit to the dentist on Friday wasn’t as bad as I thought it might be . My mouth has been sore since the treatment and I was a bit concerned that the bone graft had been rejected. A few minutes in the chair with Doctor Pedro Habet and I was reassured that all was well . He then set about removing the 22 stitches .

The next visit to the dentist is 2 January when the root canal treatment and replacing caps will start. This phase of the treatment is scheduled to run over 3 consecutive weeks when I will be in the surgery from 10am to noon and then from 1.30pm to 2.30pm.

Next weekend a new feature will be introduced to cover food and beverage . Each weekend there will either be a Bar Hopper spot or a Culinary Corner piece. This will add considerably to the editorial budget but hey whilst traditional news mediums are cutting back I am going to invest in the product!