Now when I left you it was just after a resounding victory (OK so it was a one nil win with a bit of a flukey goal) by Arsenal over Watford FC.

The next day was the day for what has now become an annual pub crawl with my friend John (yes , aka Harry the Hornet,the Watford supporter ).

After a (very) hearty breakfast (if you read the first in this series you know what this means. If you didn’t read it , you must) I set off to cross the Thames .

I took the underground. You didn’t think I walked across . Did you ?

To our favourite meeting point. The Royal Oak at the Borough

where real ale is sold

and customers are happy.

After a few (quite a few actually) beers and a bite to eat we headed north of the Thames. We were on a pub crawl after all.

John trying to look cool and stylish. But failing miserably.

I think we went to three pubs – we normally ‘hit’ six or seven but I was still struggling from the broken ankle I suffered just before Christmas – but that didn’t limit the amount of alcohol we consumed. It had to be done. 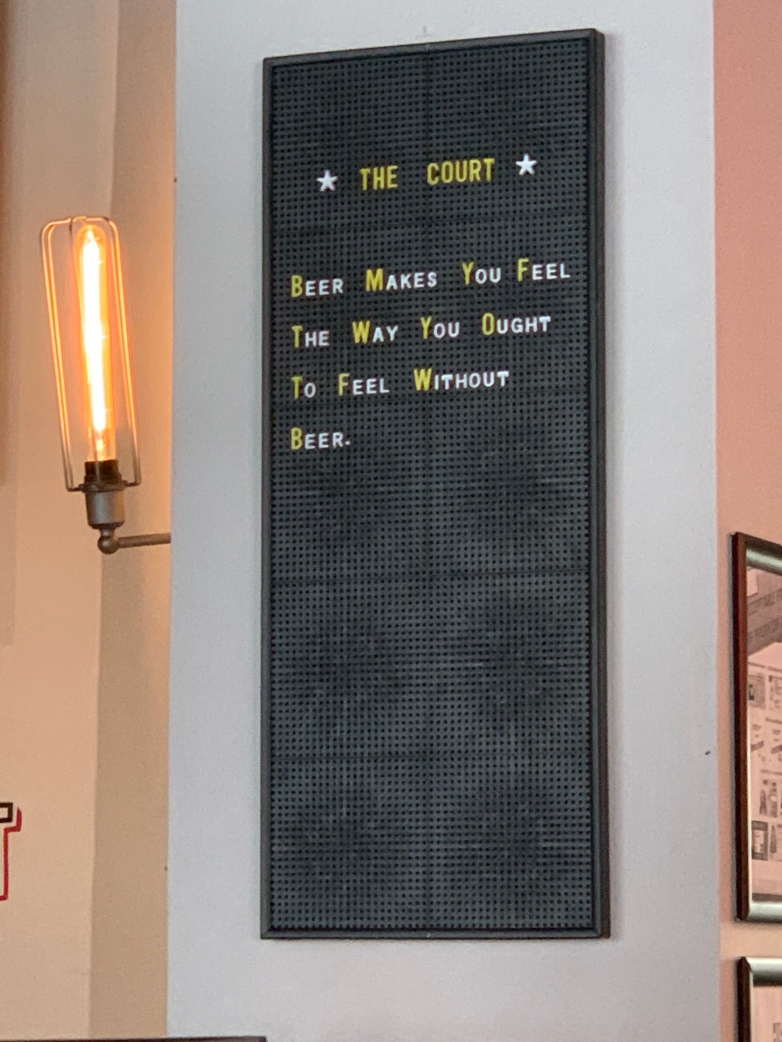 The thoughts of a sage.

The next day, after another hearty breakfast (it’s the only way to start a day – or at least that’s what they tell me at Estel’s Dine By the Sea ) Rose and I set off for some retail therapy. But I had a surprise for her. I booked tickets for the matinee of a show that had just opened in London.

When I could see that Rose was starting to look like the therapy had worked I suggested that we head for Haymarket where there were a couple of good pubs. I chose the Tom Cribb. 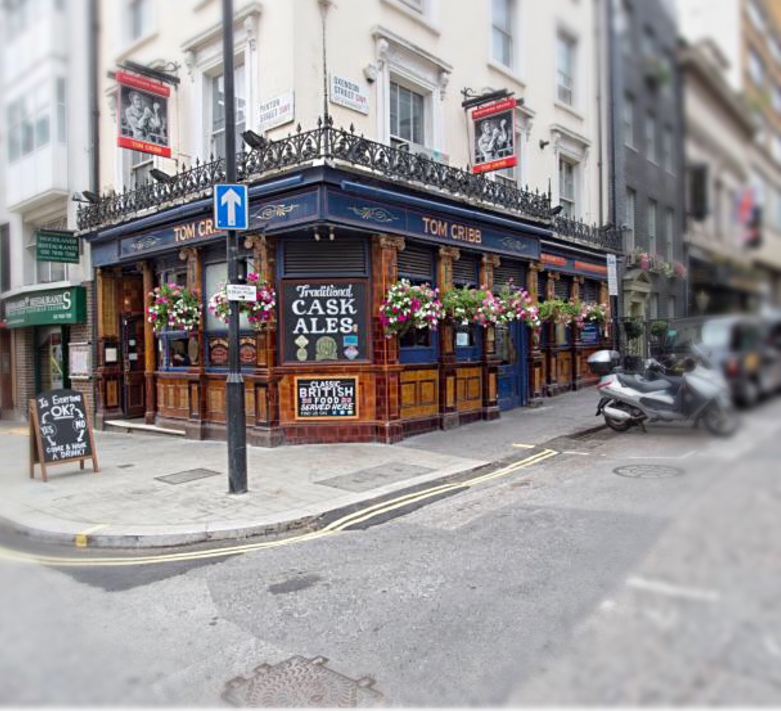 Over our drinks I broke the surprise when I showed her the tickets .

We were going to see the stage show of Only Fools And Horses , recognised by many as one of Britain’s greatest ever TV comedy shows.

Tickets to see the show was not the only surprise that Rose got. Oh, no. During the Intermission she found that she was sitting next to Joanna Lumley .

It was the second time we’d met Joanna Lumley (although it didn’t appear that she remembered!). The first time was around twenty-two years ago when I was working for the company that published OK! Magazine and the owner at the time used to host celebrity parties to generate a photo library for the magazine.

It’s a great show and one that I highly recommend if you find yourself in London during its run. It’s , as Del Boy would say, “Cushty“.

The next day we had to travel across London and once again found ourselves celebrity (sic) spotting. Eagle-eyed Rose spotted that Paul Burrell , former butler to Princess Diana was in our carriage. 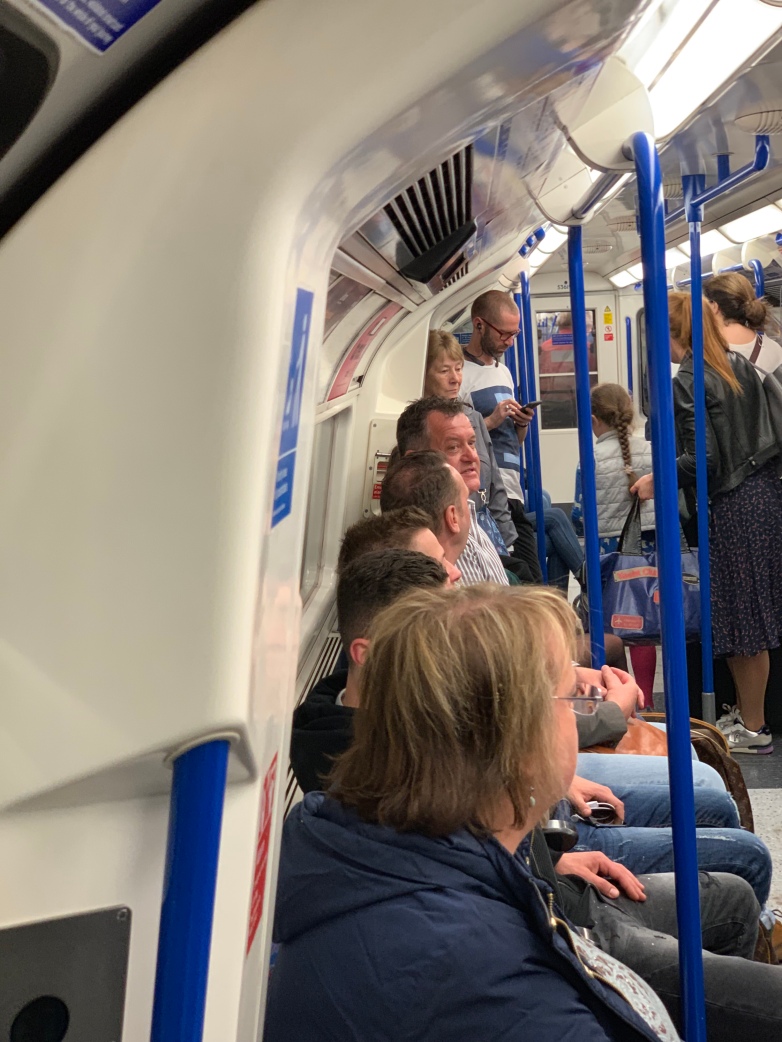 The not-so-loyal butler is fifth from the left.

Oh, I digressed. We were traveling across London to meet up with Jacqueline and Roy who had travelled down from Yorkshire to spend some time with us. We first met Jacqueline and Roy at Carlo & Ernie’s Runway Bar in San Pedro and immediately struck a friendship. It was Jacqueline it was her first visit to Belize but for Roy it was a return visit. He’d served here with the British Army in the mid seventies .

We had arranged to meet at The Moon Under Water

For those of you that have not frequented a ‘Wetherspoon’s , they are generally quite large and well appointed establishments that offer a good menu and a range of good beers and very reasonable prices when compared to pubs in the adjacent area (and no, I’m not on the payroll ).

With all of our planned meet-ups completed Rose and I spent the Easter weekend meandering around Central London in weather conditions that had been arranged just for us ! 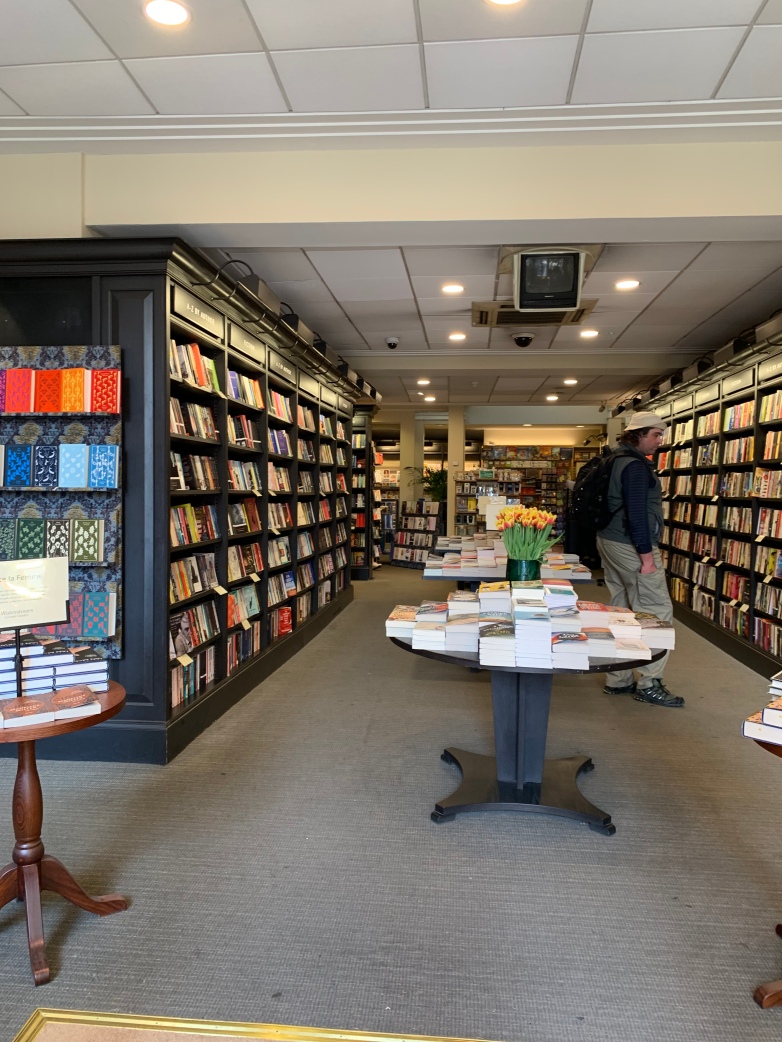 And an olde English sweet (candy for non UK readers) shop. Catch the name of the shop next door ! Snog

Rose so wanted to get Ziggy one.

My how things have changed since we immigrated. 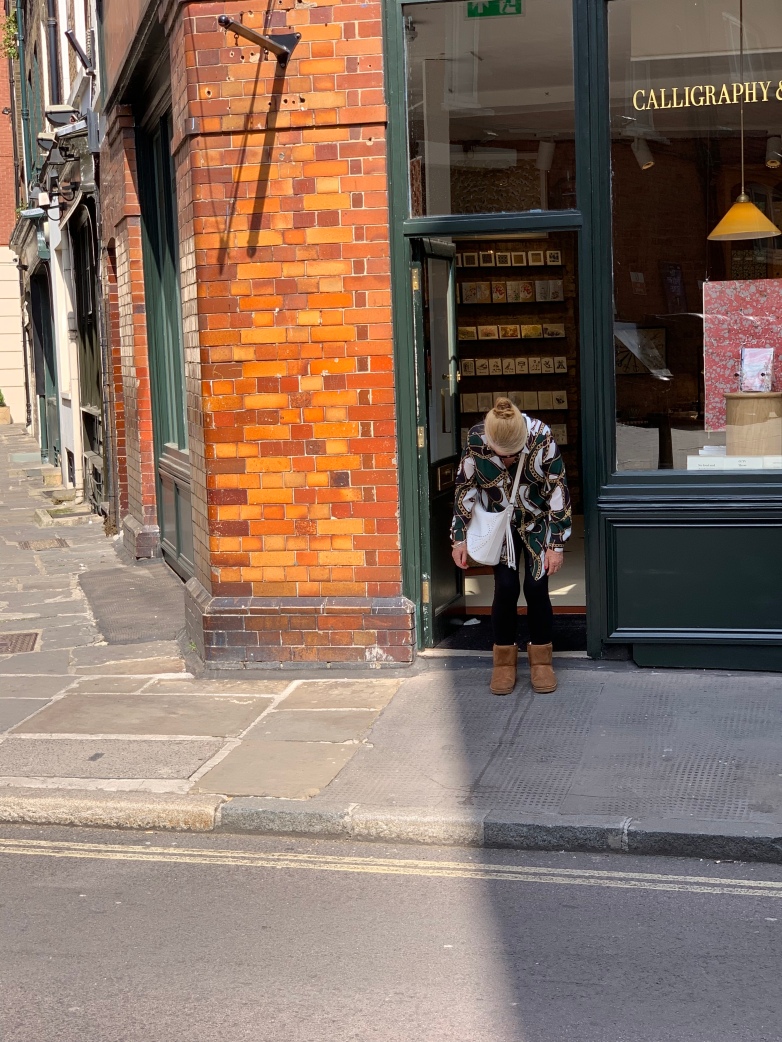 A devastated Rose after finding that her favourite bead shop in London is no more. Now it’s a shop that sells paper 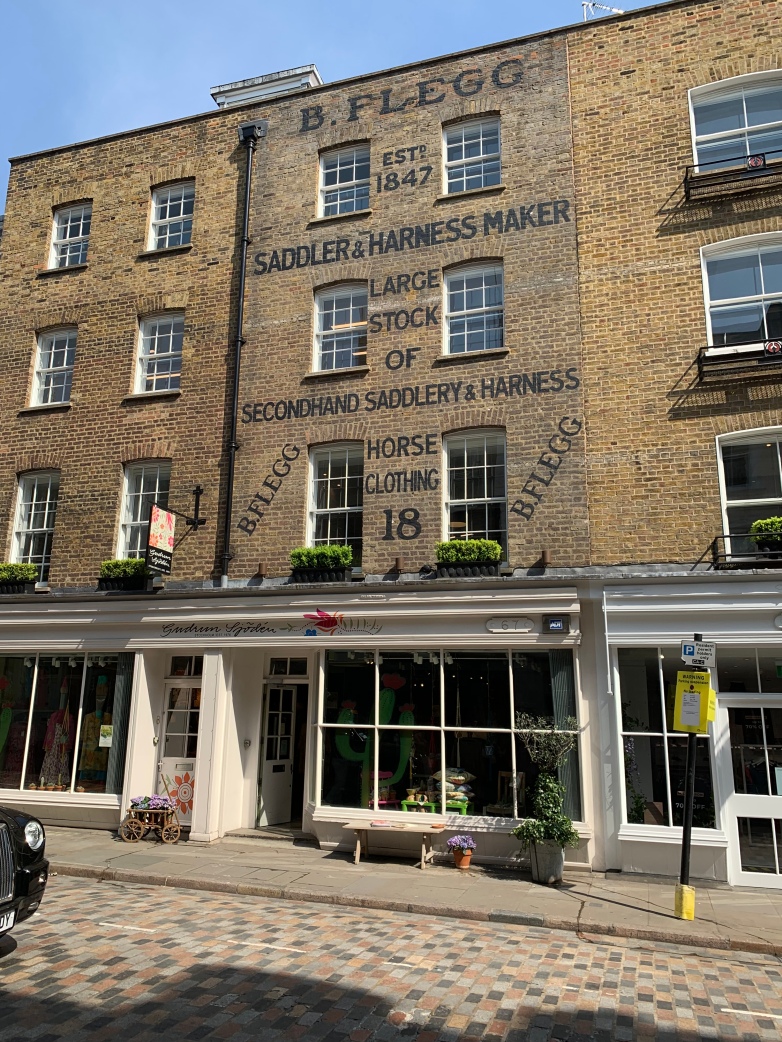 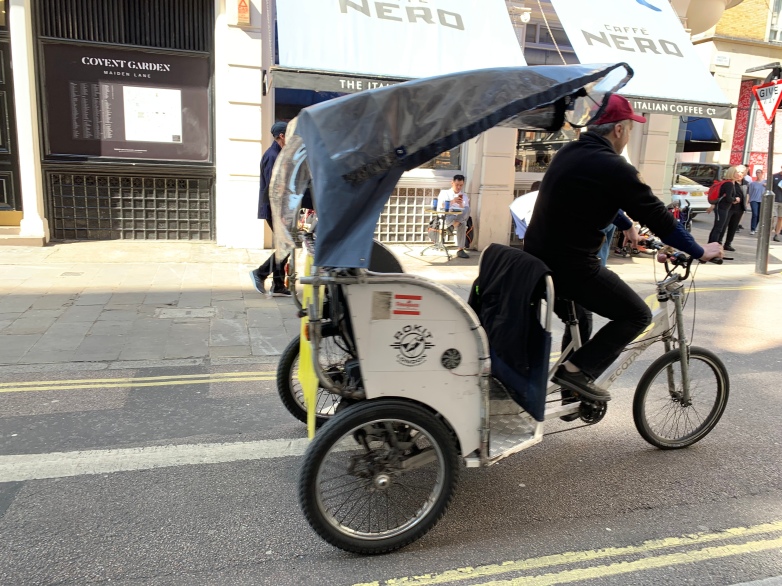 With the weather being so good we even managed to take in some ‘street food’.

All too soon it was time for Rose and I to have our last breakfast together for awhile.

Doesn’t she hide the sadness well ! But before we got up from the table she looked at me intently and said “Don’t you forget about me ” (she didn’t really but I was stuck for a song title for the ‘headline’).

With breakfast over I contacted Uber for vehicles to take Rose to her sister’s and one to take me to my friend John’s house.

First task when I arrived there was to unwrap the stuff I had delivered there ( I use it as a ‘mailbox’ ) and pack it in my suitcases.

With that task completed John and I headed to Watford for the game against Southampton. It wasn’t the greatest game but it was my last chance to watch live Premiership football ( the S word for readers from the US ). It ended a one all draw with a goal scored in the first minute and the equaliser in the ninetieth.

The next morning Janet, John and I were up early so he could take me to Heathrow airport so I could catch the United Airlines 09.30hours flight to Houston. I caught it and after an uneventful journey was in my hotel room by 19.30 hours.

I stayed in Houston for two nights so that I could treat myself to some retail therapy!

I also managed to have dinner with Caesar a friend from Ambergris Caye but it was time to head home.

The first I did after picking up my golf cart was to go a get Ziggy. I had some stuff for him. 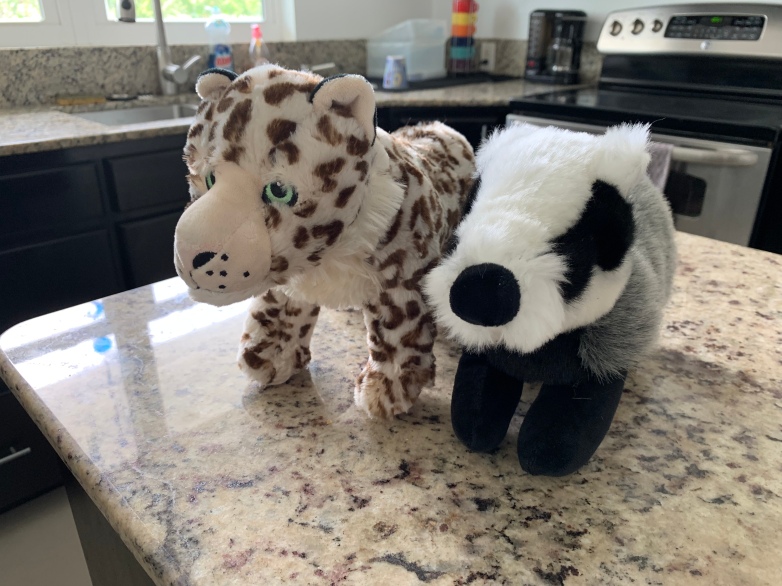 some chew sticks to keep his teeth in good order.

The headline (contrived) for this edition is based on the song released in 1985 by Simple Minds which reached number 7 on the UK Singles chart and number one on the US Billboard Hot 100.