You build a house anywhere in the world it will need remedial work over time. In Belize – and I can only really talk about Ambergris Caye – this remedial work occurs more often. The sun and salty air wreak havoc on external elements of the house (and inside for that matter) . What started out as lovely dark red mahogany entrance doors ( that’s what we started out with) very quickly become bleached and peeling. Not an attractive sight. A bit like someone who has been sunbathing too much and losing all that dead skin ! Hopefully you’re not reading this while eating . If you are, then sorry, switch off now and come back ( please come back ) later.

The rainy season fills up your rainwater collection system ( we live off- grid and collect our own water) but it also ‘washes’ away your garden. It sinks. It rains again, and deep pools of water form. Great for the mosquitos but …

Those lovely plycem ceilings over the verandas start to look very tired. The joints between the boards start to open up. The paint starts to fall away. What was once (and for us it’s only 4 years ago that we moved in) that pristine new home starts to look tired and a little disheveled.

Now I’ve never, ever been good at DIY , not that I’ve really put a great deal of effort or time trying to be, but I’m not bad at planning and organising things. So, with a couple of early mornings out on the veranda (the western, lagoon facing one) with a mug of coffee (instant, black, unsweetened ) it was time to start pondering. Comes easy to me, I’m one of life’s great ponderers !

Five of the six external doors  ( the Pump room door away from sunlight and wth a level of protection from the sea air has fared quire well) were looking very ‘tired’. Time to get them stripped, restained and varnished. Now who to do it? Ponder John, ponder. The answer is there. Moses. 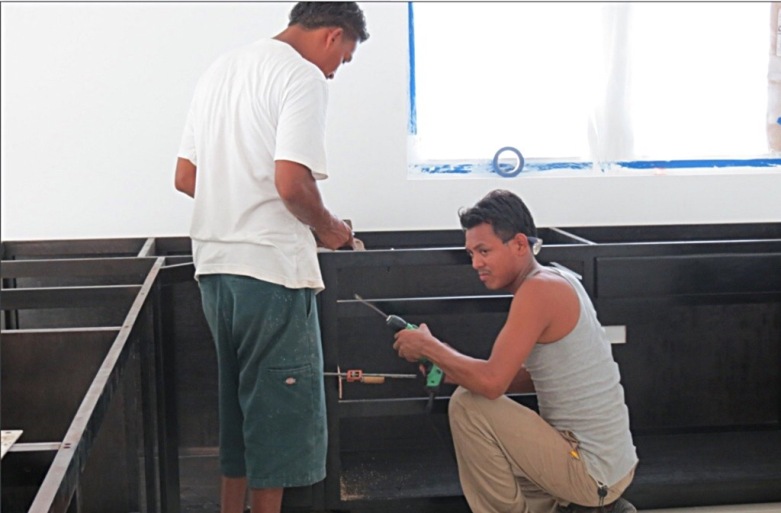 Four years ago a younger Moses ( on the right) installing our kitchen cabinetry.

I pondered some more and then it hit me ( not literally of course). Move the front gate !

Move it where you’re thinking. You are, aren’t you.

Well when we had the gate installed the road – well more oft times more than not a muddy, potholed dirt track- was relatively quite. But since our house was built in Tres Cocos and major development has taken place, the road has got busier and busier. So what’s the problem ? Well, when pulling into the house the majority of the golf cart was in the road and remained a road blockage until I unlocked the gate and drove the ‘cart into the garden (yard for North American readers).

So the result of my pondering was move the gate 16 feet into the garden. Clever right ! These would be our gates of tomorrow ! Wish I could claim the credit but I can’t , it was Rose’s idea ( she ponders sometimes too). My pondering just reminded me of it.

When to get the work undertaken ? Time for a ponder . The Christmas and New Year period . Stupid, you’re thinking. You are, aren’t you ?

Well it’s not so stupid. Construction sites shut down during this period and everyone likes a bit more money. So there’s a plentiful labour force and you can usually choose who you want. And I wanted Moses. So I made the call and I’m pleased to say that he and his business partner Fred were up for it. Moses with the nearly finished original gate four years ago. 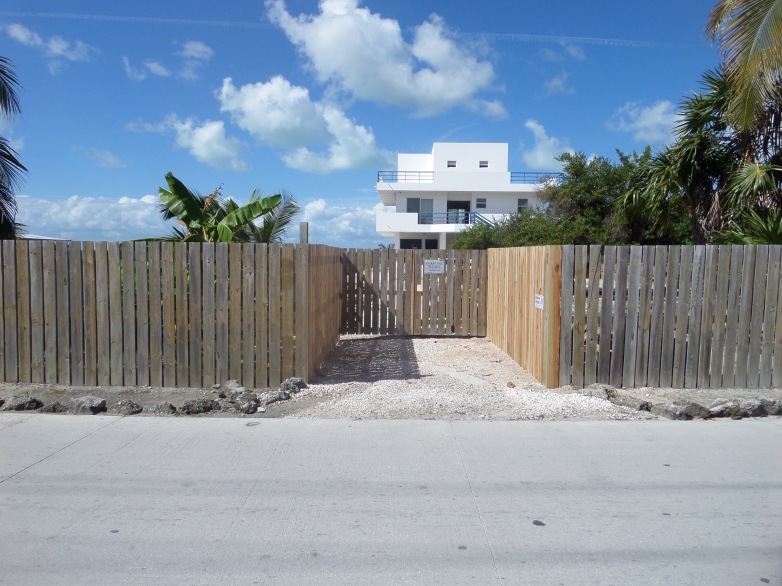 And note the signage

At entrance to off-road area.

Pride of place on the front gate. 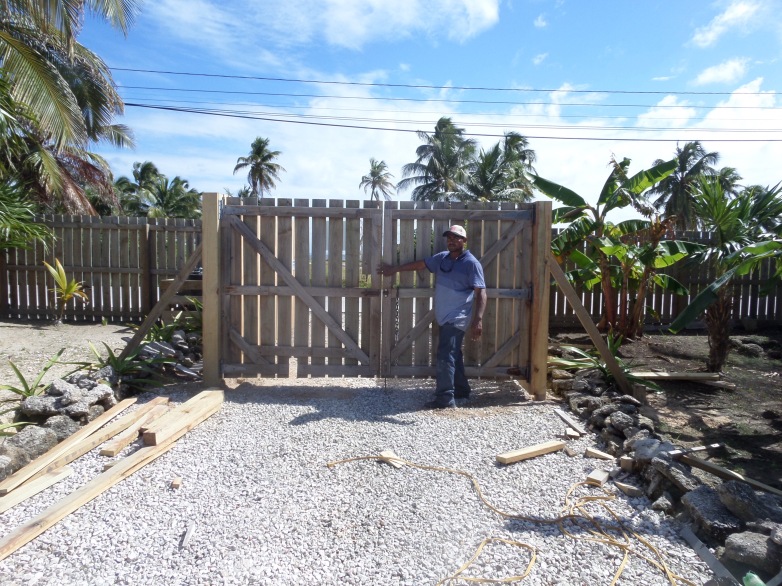 our very own speed bump.

Yes, I got impatient and went out before it had set. I can now ponder on that every time I drive in and out !

In between making the the fence sections Moses and Fred set to work on the doors. Two at a time. Taking them away and a few days later bringing them back to me and to to ‘life’.

Also on my ponder ‘list’ was to get our lot next to our house cleaned up. Oh, and our garden too. Lloyd aka Flaco ,although I think he gained the nickname long before he started gaining weight , was just the man for this job.

Vacant lot post Lloyd and his team of Ian and Dave. 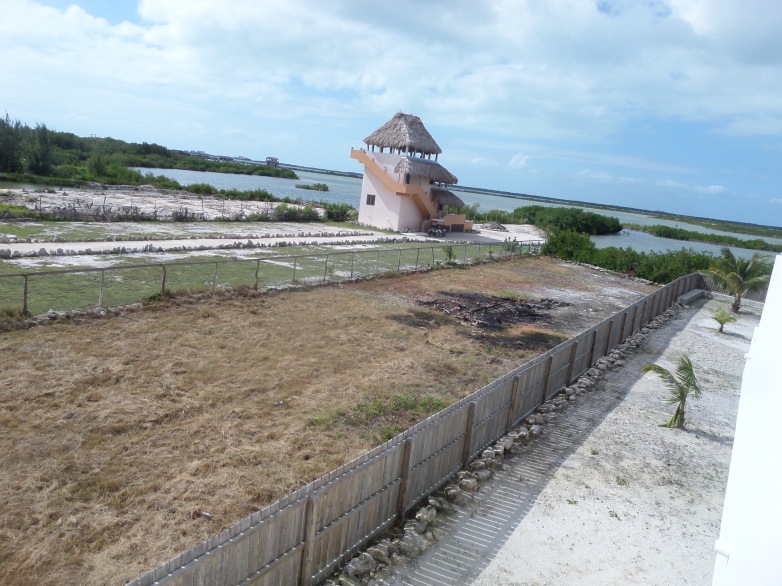 And then it was time for our garden.

While all this was going on Nicholas, ably assisted by his brother Angel and Julio, set to on the external ceilings.

Tired, peeling joints. I’m talking about between the plycem boards, not an old reefer !

The first task for the terrific three was to remove the old filler. Very time consuming and dusty work ( yes, they all wore masks and glasses).

And when enough joints had been cleaned out Nicholas set about on the equally time consuming job of filling them again. This time around with a first stage mix of adhesive and grout. Followed up with tape and then finished off with the adhesive and grout mix.

A poor picture of Nicholas applying the magical (we hope) mix.

After sanding down the joints it was then time to apply a first coat of paint.

This job still has around a week to go ( the guys are back at work now but are completing it of an evening after that have finished their day jobs. Who said Belizeans are lazy !) but we can already see the improvement. And the care and attention that Nicholas brings to any job he undertakes.

So what was I doing why all this work was taking place, you’re thinking. Why, I was pondering of course !

The headline for this edition is based on track 6 of Iron Maiden’s Dance of Death album which was released in 2002 and reached number 2 on the UK’s Official Album Chart and number 18 on the US Billboard 200 chart.