Before we set off for a short trip to Nicaragua (some editions about this will follow in the very near future) I sat out on the veranda, the western, lagoon facing, one for a good few mornings with a mug of black coffee – instant and unsweetened – contemplating what I could  arrange for Rose’s upcoming birthday.

Now I could have taken the very easy and lazy route (something that I’m normally quite adroit at) and said that the Nicaraguan holiday was an early birthday present. But no, I was not going to do that.

I contemplated some more. I could have pondered (I’m good at that too) but this matter needed serious thought and attention.

Morning after morning I supped my coffee and contemplated. I found myself talking to myself. “Whatcha gonna do about it?” I asked myself (just lately I’ve found that I talk to myself quite a lot). “I really don’t know”, I replied. And then, from nowhere, the inspiration came. A sunset cruise on Seduced By Belize‘s “SEA’S d Day, a 58 feet houseboat equipped with everything one could want for a meander around the lagoon side of Ambergris Caye.

So I had the date. I had the theme for the evening. It just needed close friends to make the occasion as special as I could for Rose. Five messages/texts later and the guest list was complete. Just the birthday cake to organise and a stop at Casa Pan Dulce on the way home from breakfast at Estel’s Dine By the Sea one morning knocked that one off  the list and everything was organised before we set off for the trip to Nicaragua.

When we got back from our trip I told Rose that I’d booked 2 tickets on a sunset cruise to celebrate her birthday but I didn’t mention that we would share the evening with some close friends. And that’s the way it remained until we turned up at Seduced By Belize’s dock and two by two the guests turned up. And then the penny dropped .

We boarded the boat and were greeted by Elito, the owner of the tour company. Elito is an all-round nice guy apart from being a Manchester City fan. But I forgive him for that. At least it’s not Manchester United.

We climbed the spiral staircase to reach the huge upper deck where Elito introduced us to his team. Edwin aka “Fish, we already knew, but there was also Daisy and Monique to look after our every need. And they did straight away with mojitos, rum punch or beer! 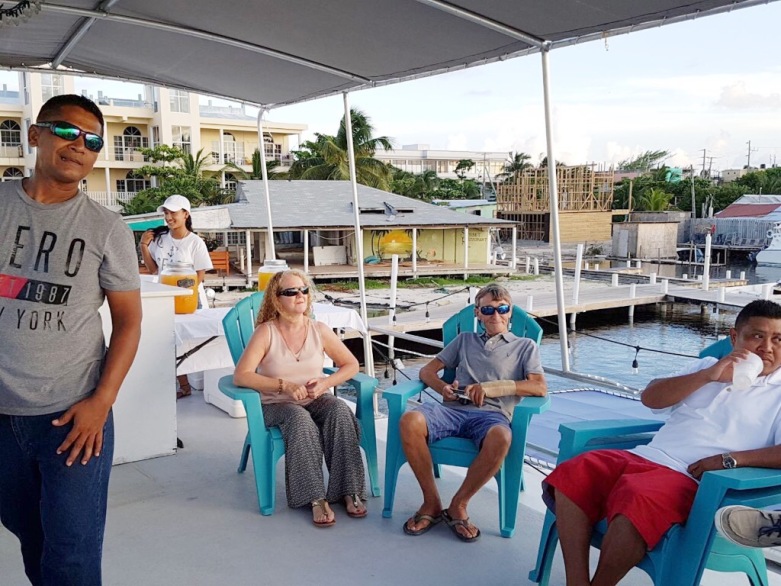 Birthday “girl” Rose waiting for her drink to arrive. 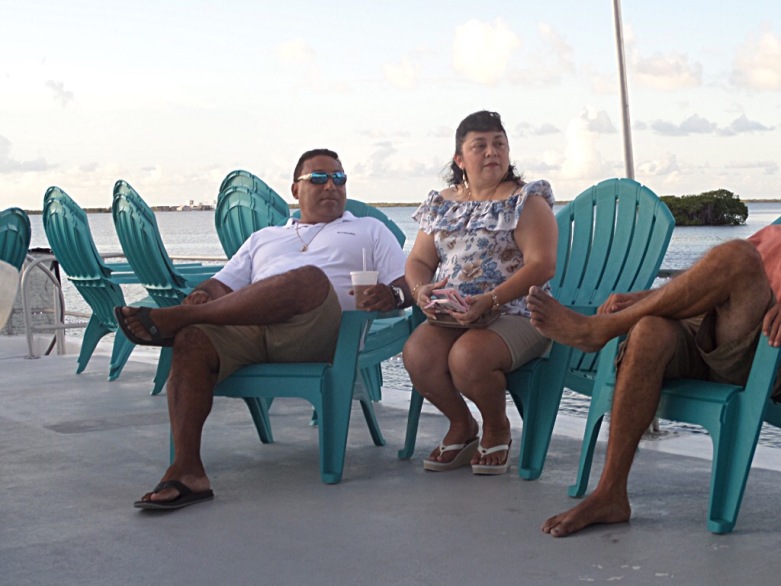 Renae and Dave getting “loved up”.

And the ‘Runway bar’s “boys”

with their (much) better halves. 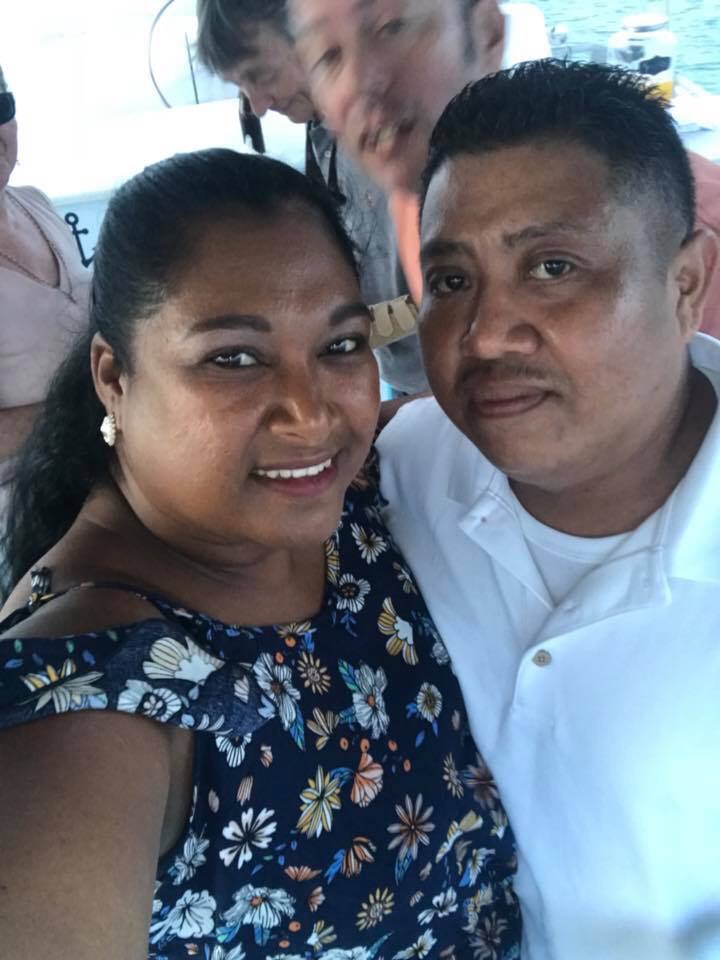 We hadn’t been moving for too long before Rose decided that because it was her birthday she was going to take over Captain’s duties. 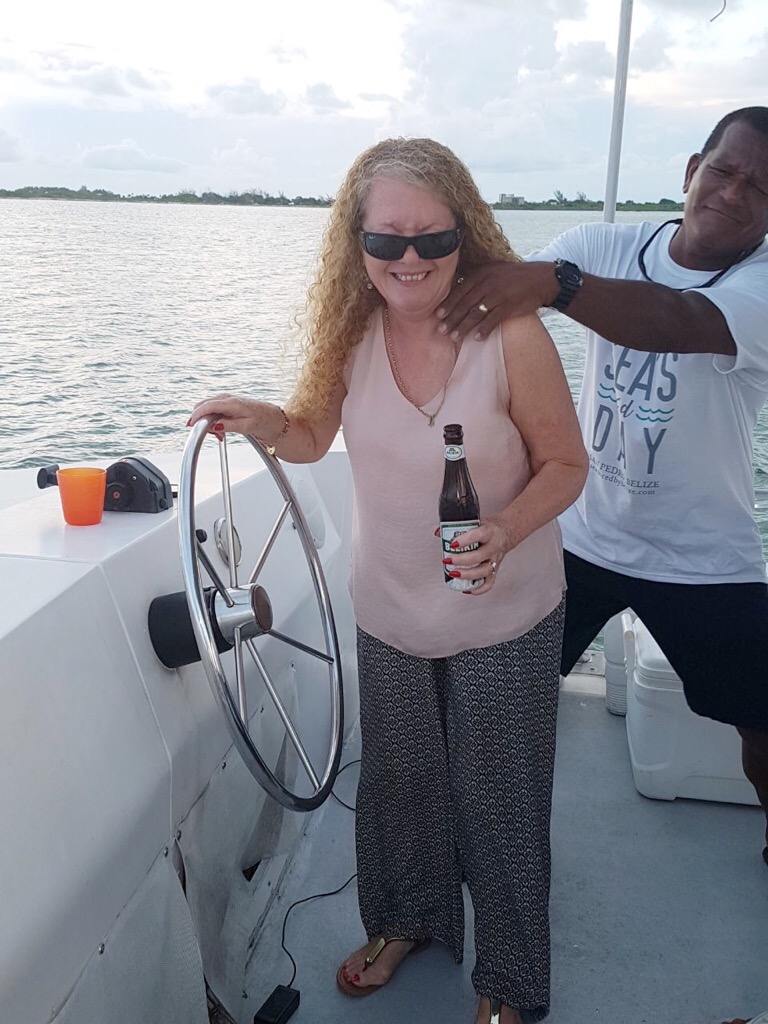 Fortunately Elito moved exceptionally fast and SAVED d Day (yes, it’s terrible) and with a bit of persuasion (we promised her another beer) we got Rose to the right side of the bar. 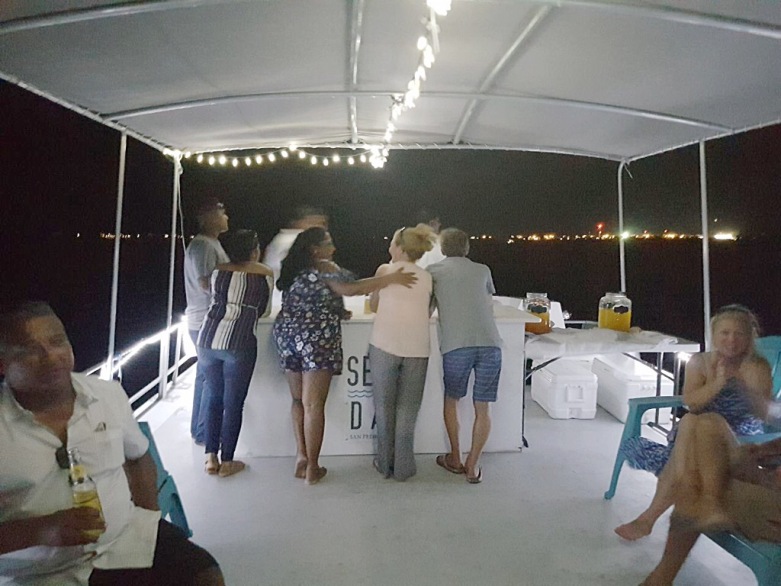 “Now you stay this side Rose”.

And when the photo was taken I was on the way up. Impressed?

Fortunately my sanity (and maturity) returned and I sat down like a good boy and resumed drinking.

disembarked and headed to Carlo & Ernie’s Runway Bar for a post cruise drink (or four). Oh, and the birthday cake.

Rose wasn’t really 36. The numbers are supposed to be in a mirror. Get it ?

Told you Rose drank a lot. Allegedly somebody told her this is what you are supposed to do before cutting it.

All too soon the evening came to an end but not before Rose told me it is the best birthday she has ever had.

I don’t know about SEAS d Day, she nearly seized the boat.

The headline for this edition is based on the single released in 1965 by the Small Faces which reached number 14 on the UK Singles Chart.