You may not be aware but I’m Belizean. Belizean through and through. Born in Ladyville just over four years ago (around twenty-nine years ago in doggy years) and moved to San Pedro (it’s when I decided to go ‘upmarket) just over two years ago.

Now anyone that knows me knows that I love a party. I mean you don’t ‘serve‘ in the British Army without knowing how to party. And we Belizeans are party people! So I was well hyped knowing that it was my country’s thirty-fifth birthday on Wednesday.

I was excited when I got up and became even more excited when Mommy (that’s Rose for the rest of you) started talking about the big parade later that day. She could see how happy I looked but I could see the look of dejection on her face.

She called me over and asked me to sit down. I did. I’m well trained and a good boy (well, usually I am). I didn’t like the look of this. What had I done? Well I knew I’d brought some dirt in to the house, but hey, how can you play around in the garden chasing iguanas without picking up some dirt! And I had scattered my toys around the house. But then I always do that. It’s my house isn’t it!
Mommy stroked me. Told me what a lovely boy I am (I know I am but it doesn’t hurt to be reassured) and I just knew that there was bad news coming my way. ” I’m sorry Ziggy” she said, ” You can’t come to watch the parade with us”.

I must have looked distraught because Mommy then commenced to kiss me on the face. ” I know it’s your day Ziggy but it’s going to be excruciatingly hot. And there will be lots of noise. And loads and loads of people. And it’s because I love you that I don’t want to put you through that ordeal”. She could see that I was sad (I can do the sad, doleful look very easily you know) and I could see that she was sad too. ” I know”she said, “I’ll take loads for photos for you to look at. It will be like you were there.”

And that’s exactly what she did (Mommy always keeps her promises. She’s not like John at all) and now I’m going to share them with you. Obviously it’s not like I was really there. But I’ve got a good imagination and I did go last year.

Carlo (yes, THE Carlo of Carlo & Ernie’s Runway Bar fame), my friend Aubrey (Carlo’s youngest daughter) and John waiting in the shade for the ‘Parade.

John hobnobbing with the dignitaries. I bet he wouldn’t let Deputy Mayor Gary Grief go until he had his picture taken with him!

He wasn’t smooth enough (I would have been!) to get his photo taken with the lovely Miss San Pedro though!

Anyway, enough of him, let’s get on the with the ‘Parade’.

The Police and Fire Departments leading the procession as they always do.

And then, crash, bang wallop. A pallette of vibrant colours, flamboyant costumes and a plethora of sounds.

First up though was my country’s flag.

And then came the people, hundreds and hundreds of people. All of them enjoying themselves. 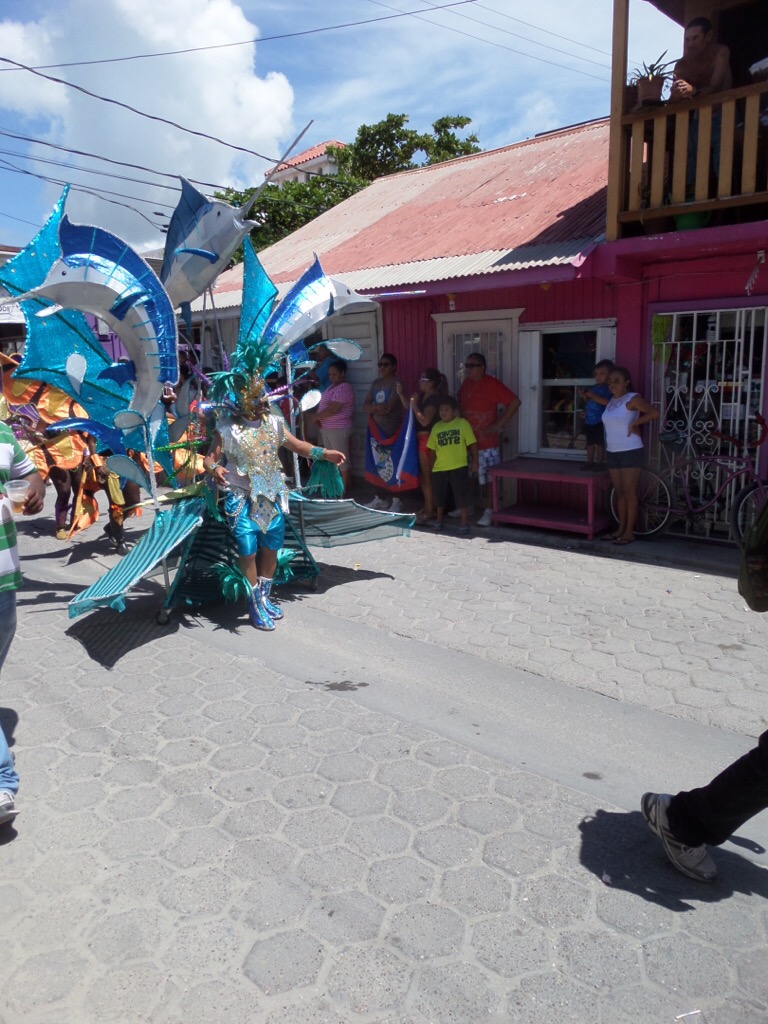 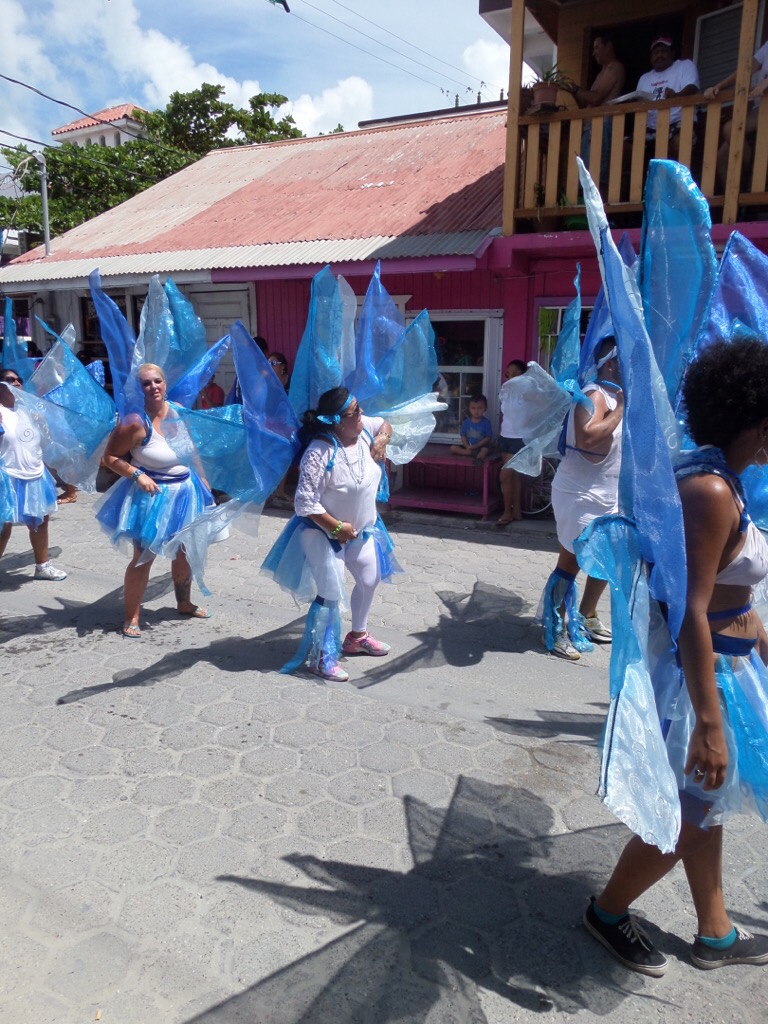 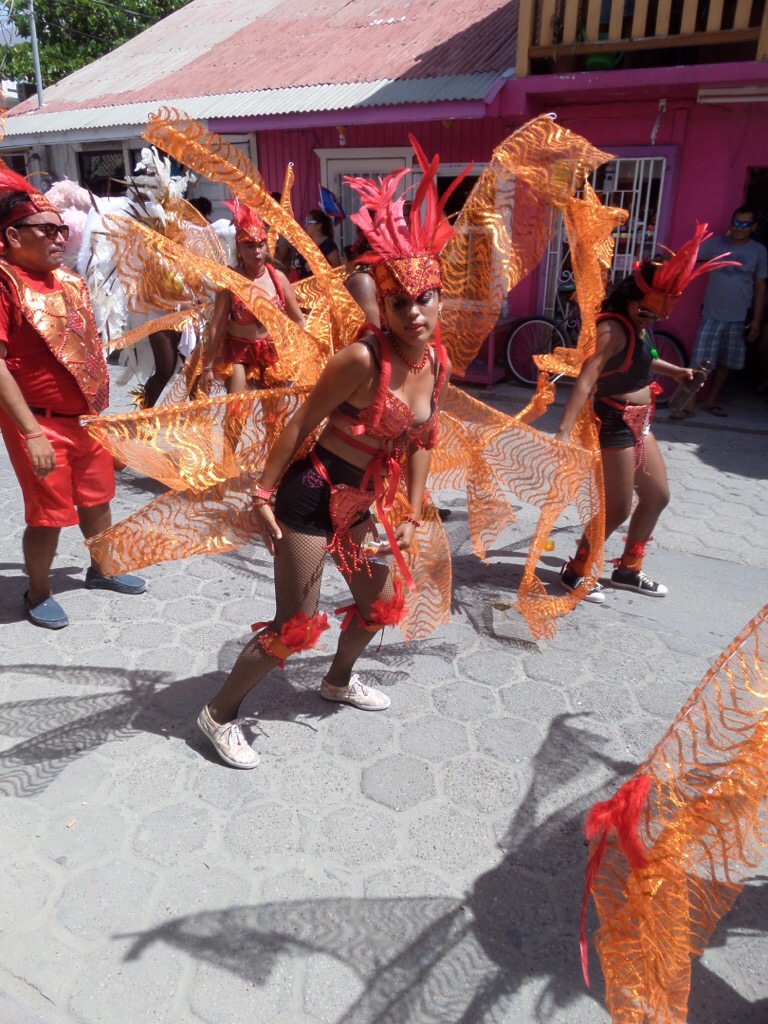 In the center is my friend Aubrey’s Mommy, Alma. Hi Alma. 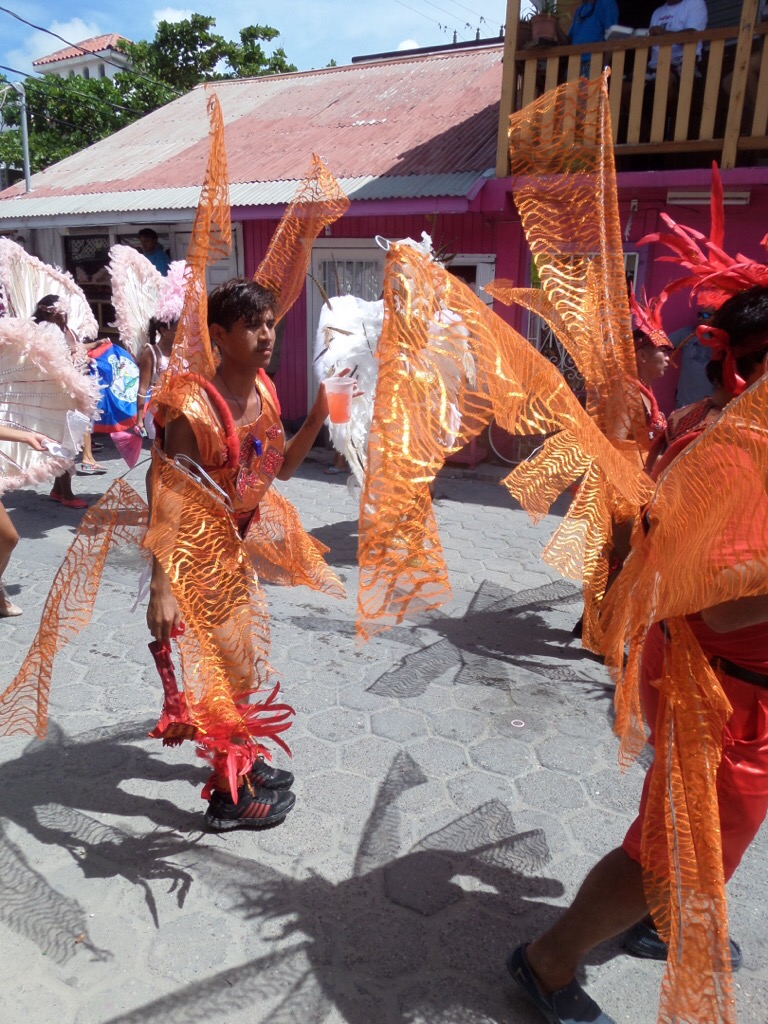 And my friend Ema. She’s definitely got ‘the moves’. Go Ema!

And there were acrobats too. 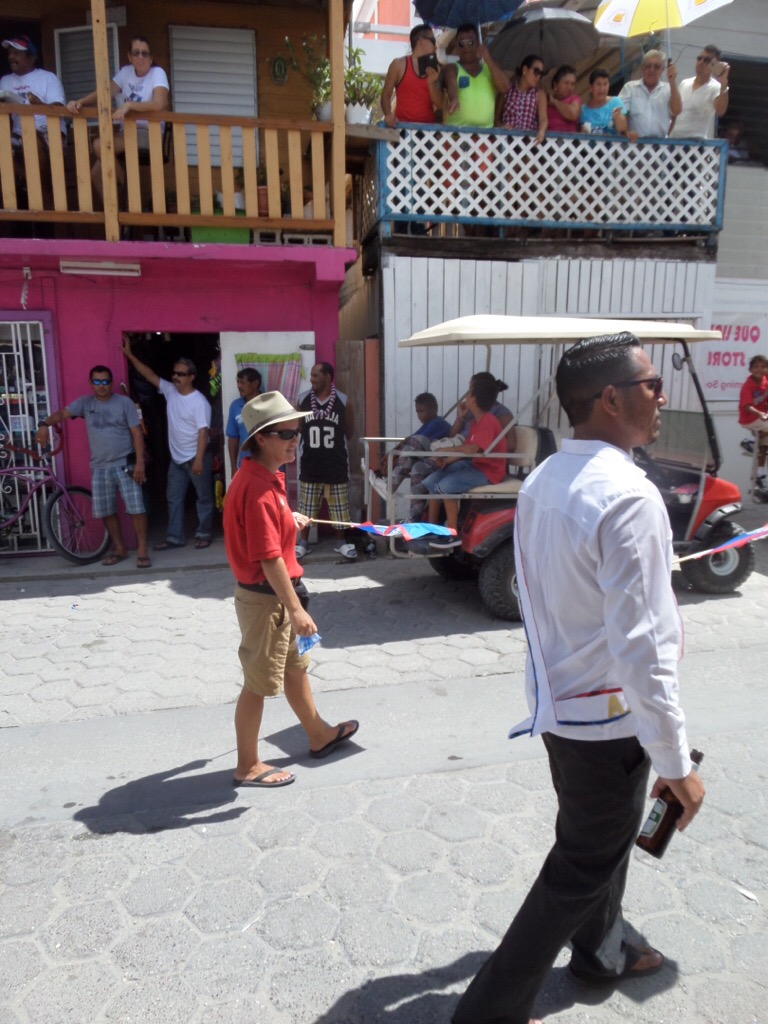 But the real Mayor was there too. But why doesn’t he throw dog treats? 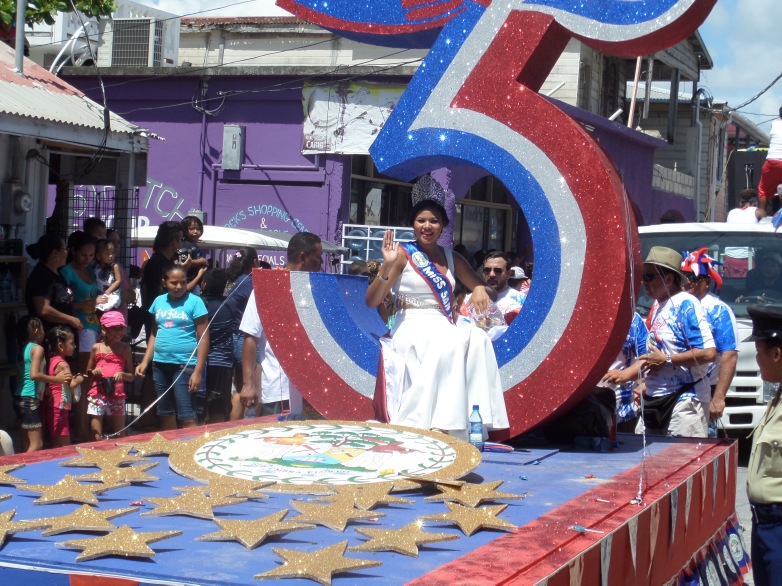 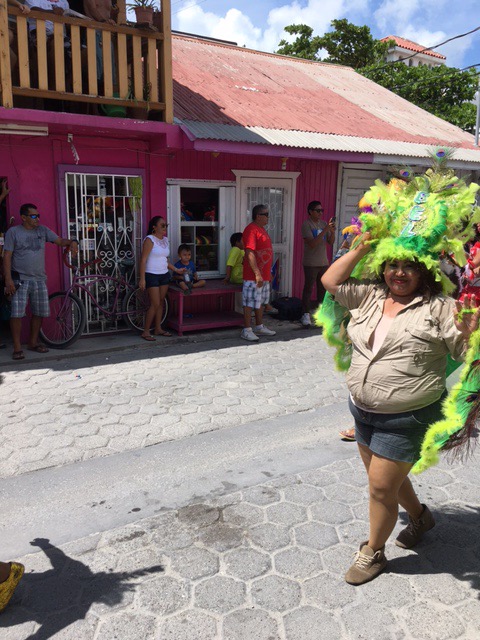 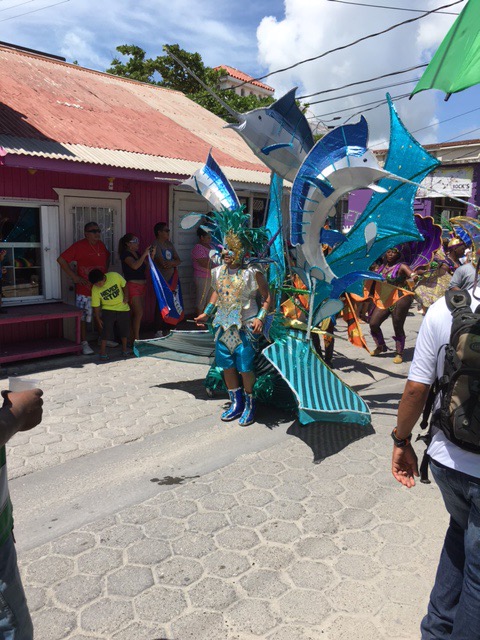 I think Mommy needs to have a word with these people.

Just the place for me to watch next year’s ‘Parade! 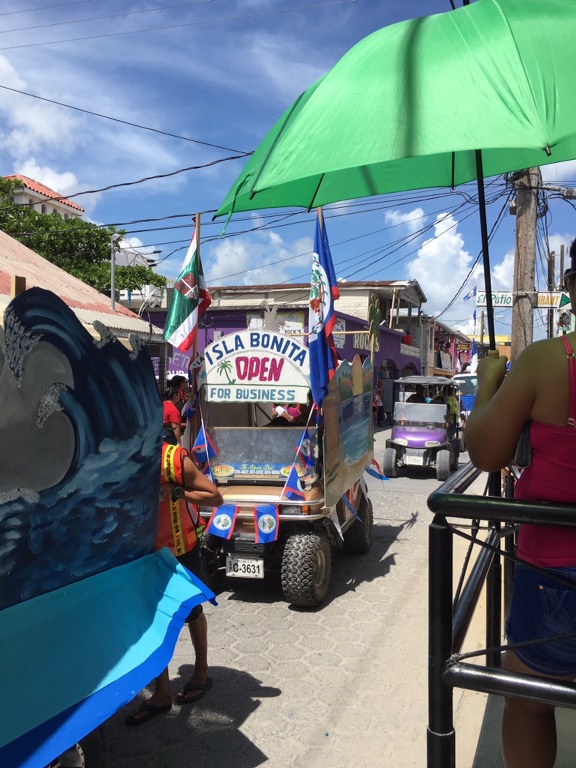 And my country is only thirty-five years old.

Today’s headline is based on the single released in 2008 by Nelly (featuring Fergie of The Black Eyed Peas) which reached number forteen on the UK Singles Chart and number  forty on the US Billboard Hot 100.