Unlike many others in Belize Rose and I got through Hurricane Earl with relatively little trouble.

We (well Rose did have some slight doubts) were confident that our house would withstand what the conditions threw at it. When we went through the final planning stages with Strukture Architects Limited in 2012 we’d been adamant that it must be designed and constructed to withstand a hurricane. This was something though that we hoped would never be put to the test.

We’d chosen hurricane proof windows – and we paid reasonably heavily for this- and although we could have saved money on less cement and rebar (and labour too for that matter) we’d spurned the savings. Having a few more pounds (for non UK readers insert US dollars) in the bank isn’t a lot of good if your home is a pile of rubble on the floor.

During the days leading up to the hurricane we made our preparations. We stocked up on food which we placed in iced filled (the ice making machine in our refrigerator went in to overdrive ) coolers because our intention was not to open the refrigerator doors unless we absolutely had to. I went to the Crystal Water Depot and got six five gallon bottles of water, a crate of Pepsi and two crates of Belikin (you’ve got to get your priorities right! And we stocked up on dried and canned food for Ziggy.

We charged up our battery operated back-up lighting and power pack (for phones and iPads) and anything outside the house that could be moved we placed in the garage or the house.

We then surveyed the house and the garden to identify what we thought could be the weak points and concluded that our garden fence and our front doors (all constructed of wood) were at some risk. I did consider fixing some plywood over the front doors but a deleted stock at the hardware stores took that decision away from me. And as to the fence? Well, aside from dismantling it there wasn’t a lot we could do. It would either withstand what it was ‘hit’ by or it wouldn’t!

On Wednesday evening at around 17.00 hours I parked the golf carton front of the ground floor apartment so that it was protected from the elements – it could only be ‘hit’ by winds from the south- and Rose, Ziggy and I settled down for storm. 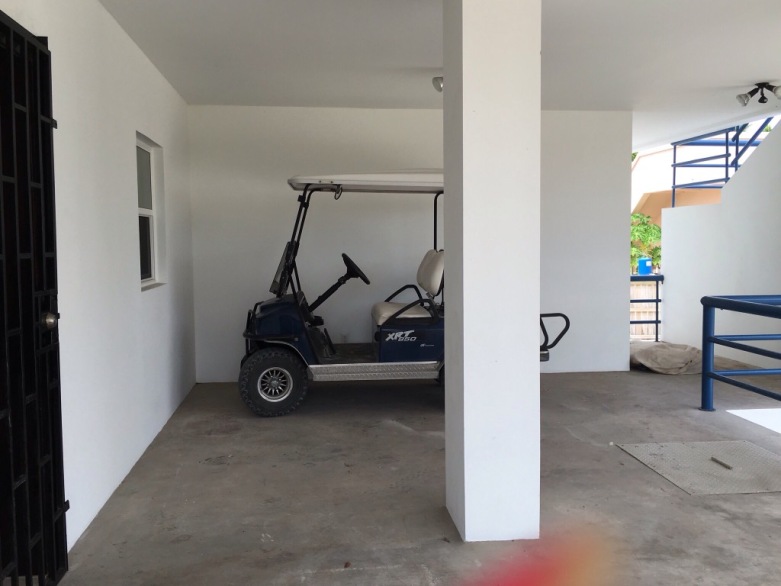 We lost power a few times but surprisingly (well for me anyway) it kept coming back until eventually we lost it completely. And then the wind whipped up and the rain came down. The front doors shook and rattled and Ziggy shook too. He was frightened. Very frightened.

Rose and I retired to our air bed ( we’d decided earlier that we would sleep in the living room so that we could be close to Ziggy – he’s not allowed in our bedroom) and Ziggy laid down beside us. I didn’t remain awake for too long – I’m one of those people that can sleep anywhere, through anything. Well nearly anything. But a Rose shaking me awake when Hurricane Earl struck in the early hours of the Thursday morning even I couldn’t sleep through.

By this time the front doors were really rattling away and I must admit that for a while I thought that they might be separated from the door jambs. So much so that I rolled off the air bed and sat with my back against the front doors. Stupid right. As if my puny little body could do battle and win against big, bad Earl!

But you know what? When we said goodbye Earl we found that the towels we’d placed in front of the doors were soaking wet from the rain that had beaten against them but the doors were still there. Firmly in place.

We got up bright and early the next morning and ventured outside to see what damage had been wreaked. Before we’d got down the stairs though we heard Maresha our next neighbour who runs Pirates Treasure Restaurant and Bar with her partner Jason calling out to us. “I’ve got gas here if you want to boil some water for coffee”.

Rose scuttled (I’ve waited an age to describe Rose in this way!) back in to the house, filled up a couple of thermos flasks with water, grabbed the coffee jar ( instant – just the way I like it) and took them over to Maresha. She returned a short while later with coffee. And toasted cheese and ham sandwiches!

We delayed the inspection and instead savoured the hot coffee and toasted sandwiches but once our thirst and appetite had been sated we -Rose, Ziggy and me – set off on our tour.

Front garden first. The fencing, including the gate, had held up but the vegetation hadn’t fared as well. Branches ripped from trees 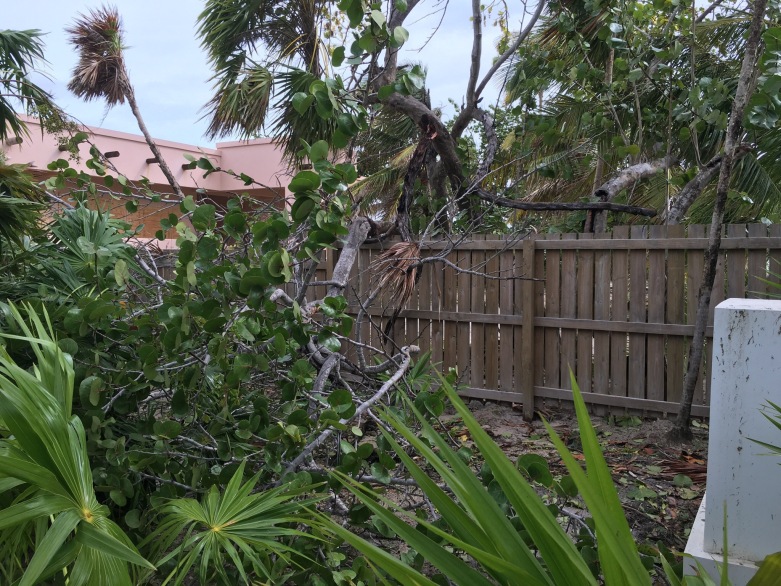 and our plantain, our beautiful, fruit bearing plantain

On to the back garden where we could see straight away that something was as should have been. A large section of our southern fence was missing! 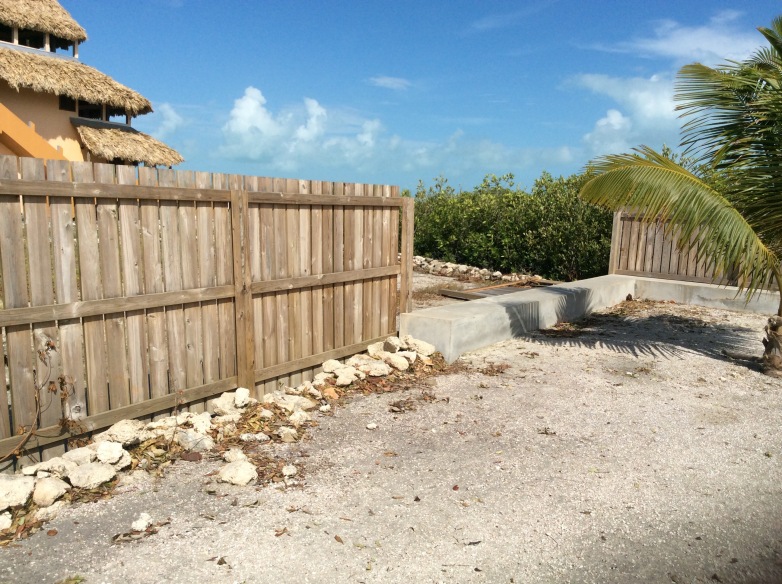 It hadn’t gone far though. It had fallen in to our adjacent lot.

and a lengthy section of the fence was leaning in a southerly direction.

This bit of damage needed immediate attention. I mean, how could we expect our Head of Security (that’s Ziggy if you are not already aware) to effectively carry out his duties if the security fences had already been breached! So I got on the ‘phone to Louis aka Wicho, the ‘can-do-everything’ handyman and he turned up the next day with his father and younger brother  to straighten and reassemble the fence.

The aggregate, cement and lumber (we’d decided that we would have the southern fence’s post set in concrete) arrived 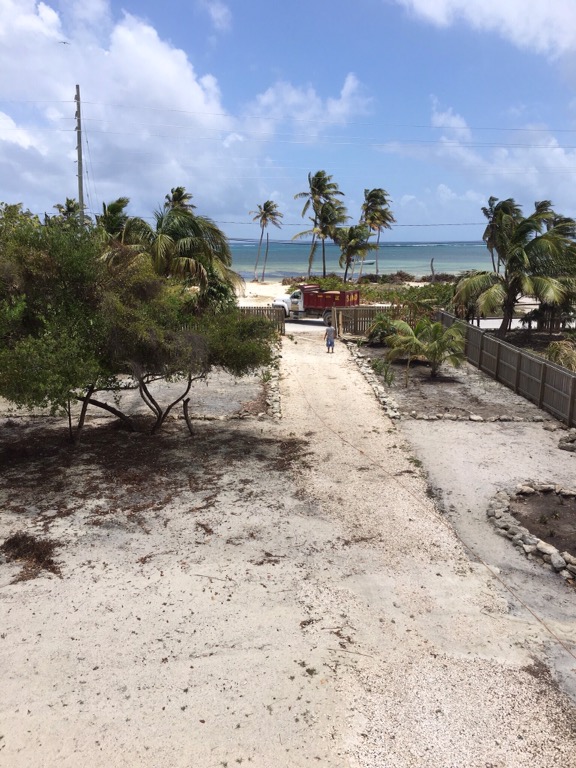 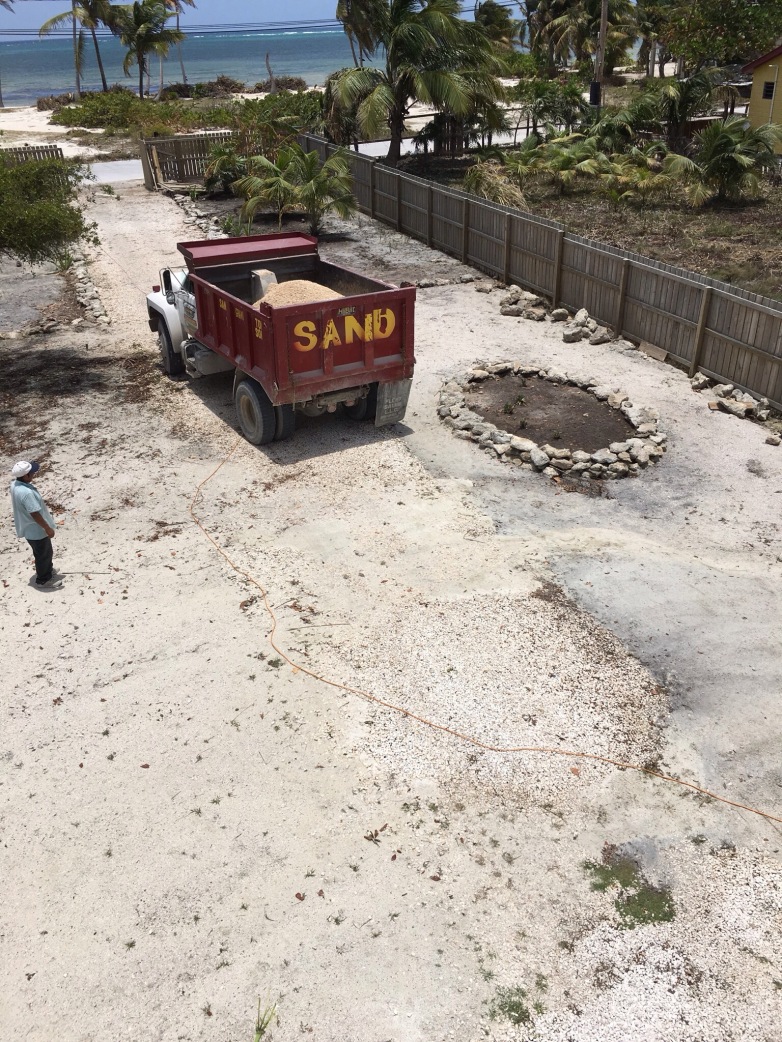 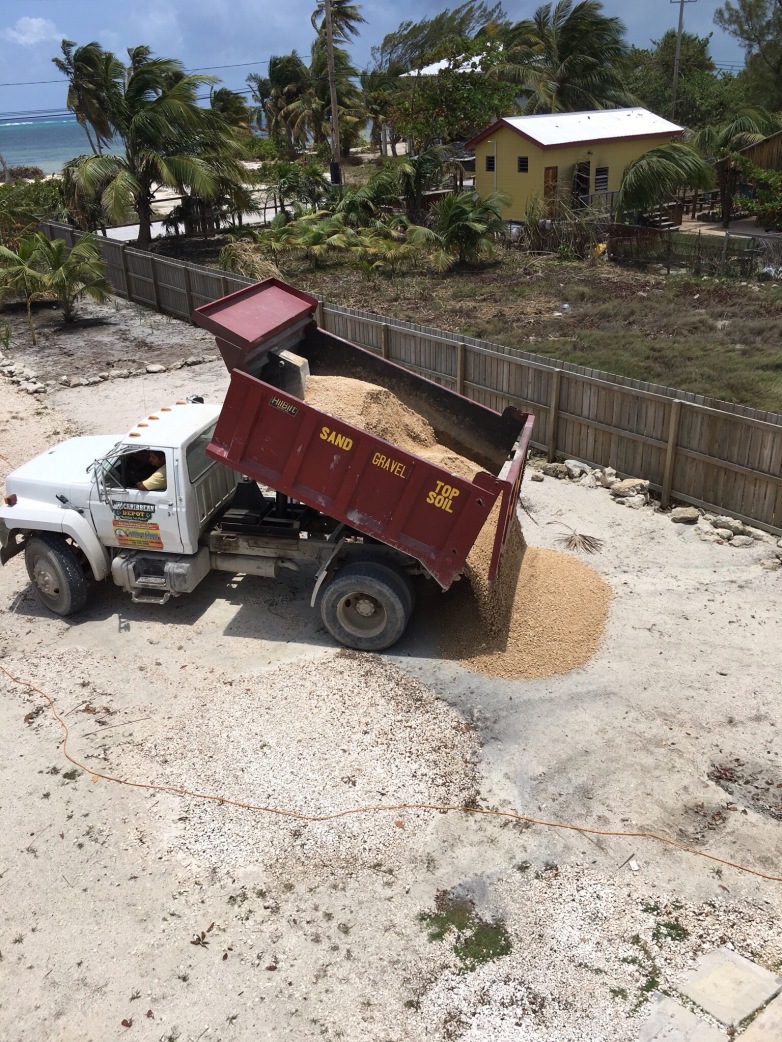 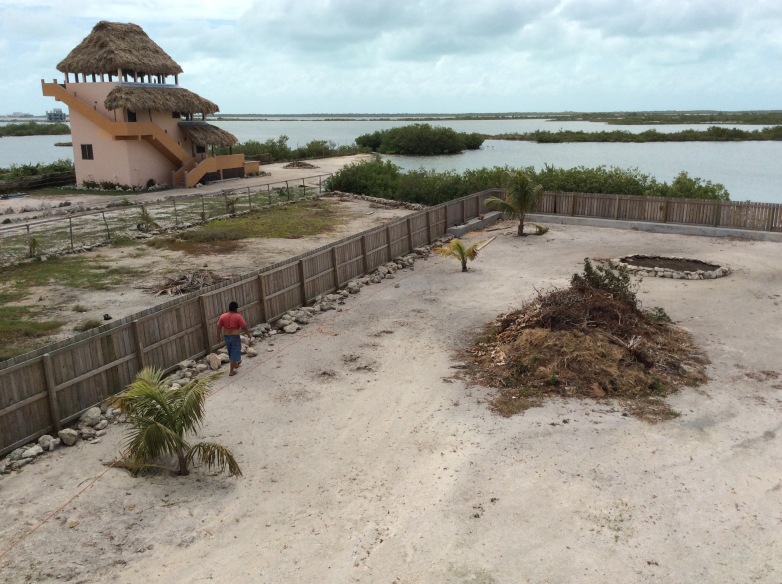 and the large front gate was now a double gate.

Having taken care of the immediate repair work Rose and I set about deciding what changes we need to make for if there is a next time. Our house had stood up well to the hurricane but you can always make things better.

Number one on the list of improvements is to buy a generator. The plan is that it will be able to provide emergency power for two refrigerators (our one and the one in the ground floor apartment), the oven, microwave and one fan in our living area and one in the apartment . 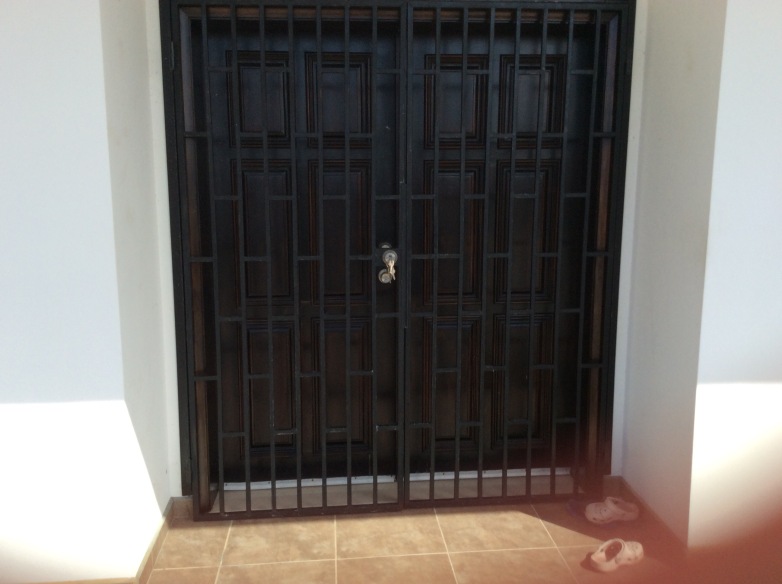 so that we can bolt plywood sheets to the outside of them. This should provide protection for the wooden doors. We will then place sandbags between the burglar bar gates and the front doors to prevent rain entering the house.

Hopefully  the generator will only spark in to life during power outages and the plywood boards and sandbags will remain in the garage.

The headline for today’s edition (the first for a very long time) is based on the single released by the Dixie Chicks in 2000 and reached number nineteen on the US Billboard Hot 100.