Some mornings out on the veranda – the western, lagoon facing one – I take time out from reading The Times on my iPad and just sip my coffee (black and unsweetened) and I enter a state of cogitation (sounds like something that Mr Spock might do, doesn’t it. No. Oh well).

These cogitative states have covered a myriad of subjects but just recently I’ve kept coming back to the same one. “What changes have I undergone since moving here coming up to four years ago?”.

Well obviously there’s the physical changes. Advancing age – no matter how hard you try to fight it ((without the aid (sic) of cosmetic surgery and/or drugs ))- is one thing you just can’t beat. Well, not if you want to carry on living.

So I’ve grown a few more grey hairs (not complaining though because I’ve still got it. Hair, that is). I’ve gained a few more lines in the face. I blame the sun for that though, not aging! I’m not as agile as I used to be. I can still touch the floor – keeping the knees straight of course – with my fingertips. But … I used to be able to do this with the palms of my hand. I can’t lift the weights I used to be able to carry very easily . My days of sprinting are long since gone. Oh, I’ve lost weight too. Weight with my slim (OK, skinny) frame that I could really have done without losing.

And there’s the mental changes to contend with too. The memory is nowhere near as good as it once was. The days of storing hundreds of telephone numbers, company names, clauses/page numbers of contracts is a thing of the past. I’d say “distant past” but I can’t really because I only packed up working for a living just under four years ago. Actually in all truth working packed up with me. I was deemed to be redundant. Surplus to needs. I suppose this evaluatin of my worth (or lack of it) hurt at the time. But it turned out to be one of the best decisions ever taken for me.

Why? Well it accelerated the relocation to Ambergris Caye, Belize for Rose and I. Over five and a half years earlier than we had been planning.

But the physical and mental changes are not all negative ones. I’m sure that I walk with a much straighter back now than I ever did in England. The cold and rain do tend to make you hunch over. My skin is a lot better and doesn’t suffer from the dryness that the sometimes harsh English weather caused.I think the perspiration opening the pores creates a natural cleaning agent. Apologies if this sounds a bit girly but I’m told we all have a feminine side …

But most important of all is that I feel much better. Now this could be a mental thing of course but I genuinely believe it’s a physical thing too. It’s the mental changes though that are most noticeable to me.

I’m far, far more relaxed about things now. When working for a living it wasn’t uncommon for me to be unable to go to sleep at night because I had so much going on in my head. I’m sure that many of you reading this have the same problem. That list of things that you MUST do the next day. Sound like you? Not me anymore. Now my head rests on the pillow and zzzzzzz until I wake anytime between 04.00 to 05.00 hours the next morning.

In my previous life – the one that included overcoats, rainwear, working 12-14 hour days- the day started with me compiling a list of all of the things I had to do. Had, not wanted to do. Now ? Well I do occasionally write a list. It normally isn’t very long. And … sometimes I don’t refer to it for weeks. In fact I’m pretty sure I’ve compiled some lists that I’ve never looked at again! How times change.

Now I generally only concern myself with two things. Concern One – will our 45,000 gallon rainwater collection tank last through the ‘dry season’? Concern Two – that GBP doesn’t weaken against the dollar when I’m about to exchange currency for our living expenses. The rest I just ‘allow’ to happen. I now ‘go with the flow’ as opposed to trying to go against it.

Oh, I nearly forgot. There is a Concern Three. Will Arsenal ever win the Premiership again in my lifetime? And you know what. It’s probably the thing that concerns me most!

Now what brings about these physical and mental changes? Well I’ve already mentioned the much, much ‘kinder’ climate. I mean it really is difficult – perhaps nigh on impossible – not to feel physically better when the sun is warming your aging bones.

But you know what I think is also a contributing factor – and a big one at that ? The friendly and welcoming nature of the Belizeans.

We’ve made many, many Belizean friends since we moved here. And I believe that we are friends because of how we are and not who or what we are.

We’ve been invited to family events

Rose at a Baby Shower. Not too sure what she’s supposed to be.

And I haven’t a clue what she’s doing here. Rose told me it was some kind of competition!

At least the expectant Mum controlled herself.

We’ve been to a 3 year old’s birthday party. Probably the first one I’ve been to since I was 3 myself. And we’ve been on numerous ‘no work day’ (for our friends that is. Me? I gave that stuff up nearly 4 years ago!) outings. 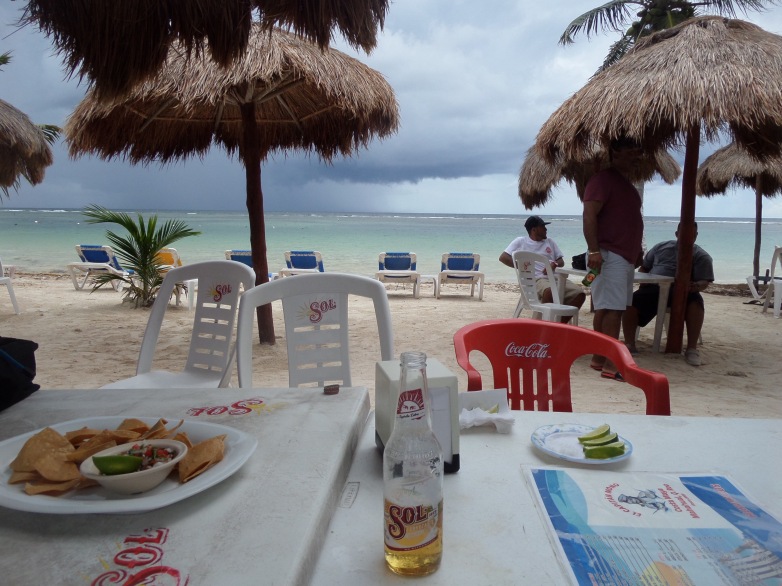 Not a bad place to enjoy a ‘foreign’ beer.

Anyway enough of this reminiscing, let’s get back to Concern Three. You’ve forgotten what that is, haven’t you! “Will Arsenal ever win the Premiership again in my lifetime?”

Well I wasn’t prepared to just sit idly by and let things be what they are going to be. But what could I do? And then it ‘hit’ me. I needed a mojo. And a big one at that. So I placed an order for one and then I waited. And I waited. And then I got word that it had arrived, so I rushed to Tropic Air Cargo and collected it.

The next day after having breakfast – at Estel’s Dine By the Sea (where else!) – I rushed to my mojo’s new home. It’s temple of dreams, Carlo & Ernie’s Runway Bar where I’d arranged to meet THE Carlo.

I very quickly unopened the box and pulled the content out and laid it carefully out on the deck of the bar where Carlo was waiting with a pair of scissors. 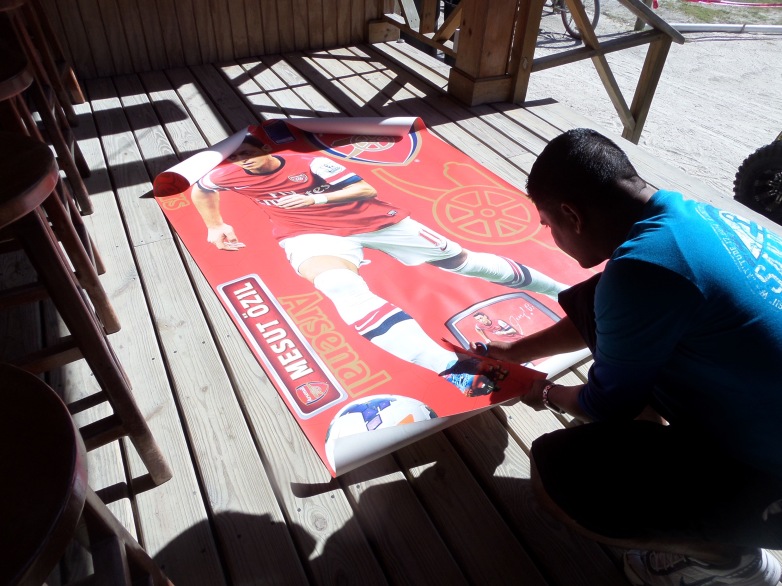 Displaying speed of hands that Bruce Lee would have been envious of Carlo brandishing the scissors in all directions and my mojo started to take shape.

And then it was time to place it in its new spiritual home. The ceiling above the bar.

Rafa lending a hand. Well someone had to take the photos!

And then the finishing touches.

Now hopefully Mesut will work the magic at the Emirates (and in the ‘Runway) on Tuesday when Arsenal take on Barcelona in the Champions League. And you know what? I think he will because I got my mojo working before he even arrived. I won BZ$ 1,000 in the ‘Runway’s Super Bowl Pool!