It will seventeen years this year since Rose and I first ‘found’ San Pedro and in all that time we’ve never been to a Jerry Jeff Walker Pickin Party. These Pickin Parties are organised by the ardent and loyal Jerry Jeff Walker fans that follow him here to Belize for the concerts he gives annually. It’s quite amazing really that we’ve never been to one when you consider that he first started his musical visits here shortly after our first visit.

Now I don’t know when the Pickin Parties started (and quite honestly I really can’t be bothered to spend an inordinate amount of time on the Internet trying to ascertain this information) but I’m pretty confident that they’ve been ‘going on’ for quite some considerable time.

Part of the reason may be that I’m not a big fan of Country Music. I don’t dislike it but it’s not my style of music of choice. Let’s put it this way, if there was a juke box with only ten songs on it and nine of them were Country then I’d probably choose the one that wasn’t. That is unless it was Heavy Metal or Punk. Get the drift.

I can’t say the same for Rose though. She is a big, and I mean BIG, Country Music fan. Remember she’s Irish (born there and not claiming heritage from a forbear from three of four generations ago) and the Irish (yes I am type casting) generally love Country Music.

Although it’s not my favourite genre of music I’ve actually been to Nashville twice and on both occasions have gone with Rose (well I wouldn’t have gone on my own) to the Grand Ole Opry and have actually stood on the stage so going to a Pickin Party with Rose didn’t seem like such a tremendous sacrifice for me to make. And anyway you’re hearing generally deteriorates the older you get!

So on Thursday,after a hearty breakfast at Estel’s Dine By the Sea and running a few errands in ‘Town , I returned home (enjoying the paved road right to my front gate) and waited for Rose to get ready (I do this quite a lot by the way) and eventually (and I mean EVENTUALLY) we set off for the Pickin Party that was being held at Carlo & Ernie’s Runway Bar & Grill stopping on the way to pick up faithful, long time, long term island visitors Melissa and Ken.

We all got there shortly after 13.00 hours and the place was already busy 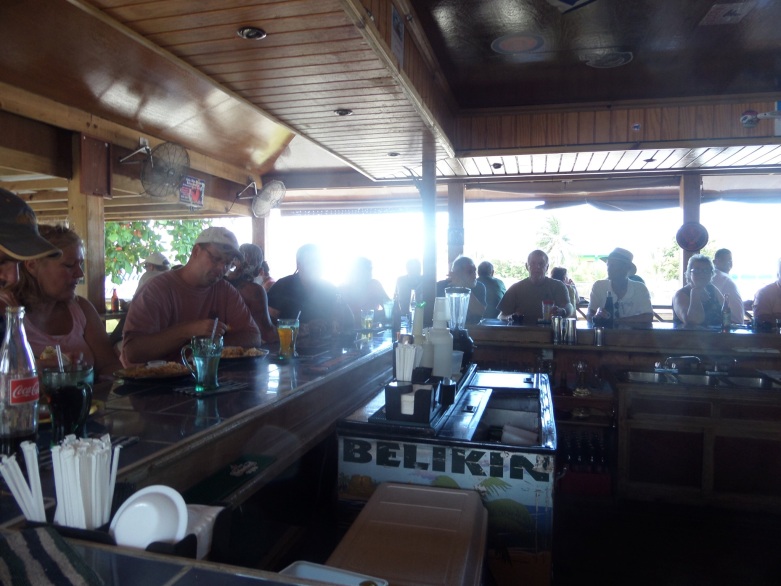 and they hadn’t even finished setting up the stage.

Rose and I grabbed places at the filling up bar

Rose is the one with the long hair!
(Photo courtesy of Melissa Fellure – thank you Melissa)

and settled down – with the assistance of a Belikin or three – to enjoy the music. 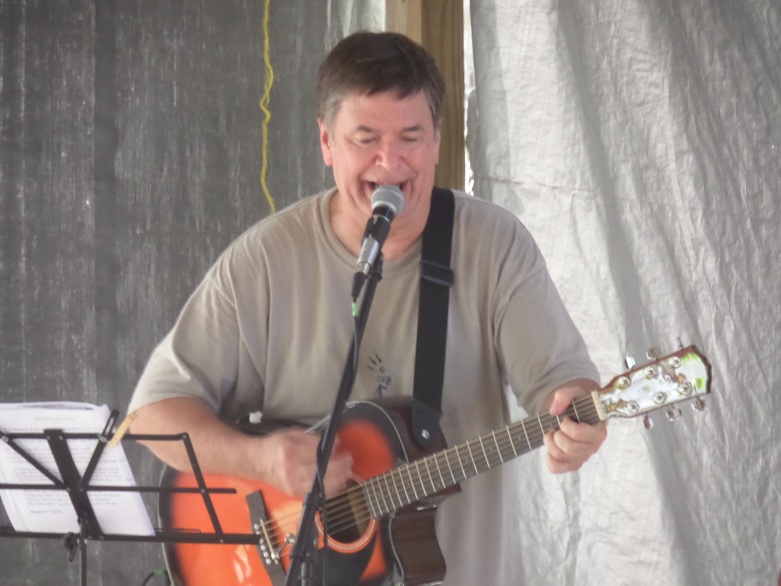 The enthusiasm of the musicians was there to see and the large audience rapturously applauded every song. 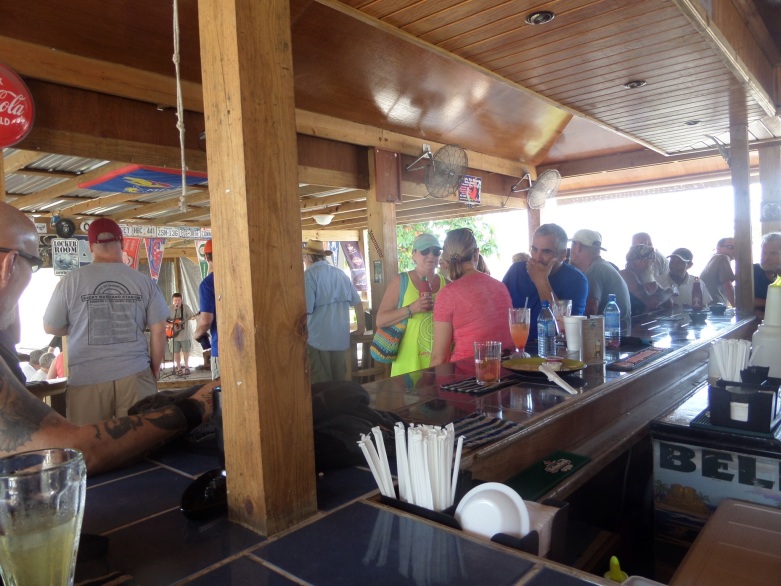 Rose and I, like everyone else there, had a thoroughly enjoyable time. Just goes to show that there’s a first time for everything!

Oh, before I bring today’s edition to an end it’s time for that not so subtle reminder. If your thinking of buying property in Belize do then do please give Pelican Properties Limited/Belize Real Estate Limited the chance to help you find what you are looking for.

The headline for today’s edition is based on the single released in 1992 by Little Texas which reached number thirteen on the Hot Country Songs chart.