On Sunday I was up a little bit later than the norm but still out on the veranda (for first time readers it was the western, lagoon facing one) with my mug of instant black, unsweetened, coffee and the trusty iPad by 05.45 hours.

Still in good enough time to make my acquaintance again after a week’s break with the Sunday Times online. I read my chosen sections (Sport, Business, News if you’re interested) for around an hour disturbed only by Ziggy wanting feeding and the sound of the grader going past our front gate.

I then showered, shaved, brushed my teeth and dressed (yep, in that order) and then set off for breakfast at Estel’s Dine By the Sea. The timing was all important because the Swansea v Arsenal game was being broadcast on TV at 10.00 hours. Didn’t want to miss that. Or so I thought at the time!

Unfortunately the first heavy rainfall will undo most of the good work. Moaning? Absolutely not. That’s just the way it is. Until the new cement road is in place!

Although only a little stretch had been flattened it, along with the ever increasing length of paved road, made my journey to ‘Town so much more pleasant. And quicker (I didn’t speed though. Honest)!

I enjoyed my ‘usual’ breakfast of eggs (sunny side up), potatoes, bacon and a tortilla. I’ve got to admit that I also enjoy the fact that, more often than not, my mug of black coffee ‘hits’ the table shortly after my derrière ‘hits’ the seat. Added to the fact that my breakfast order just turns up. I don’t need to say a thing apart from “Good morning Shanti/Sam/Mark”.

Stoked up with carbohydrates, protein and fibre I was ready for the game and headed off home confident that we would get a win. Not for the first time in my life I was wrong. Oh so wrong. I’m just pleased that my blood pressure is good because following Arsenal fully puts it to the test. If you haven’t guessed it, we lost.

I didn’t have too long to wallow in self-pity though because I had to shower and change. Rose and I had been invited to Eddie Alamilla’s home to celebrate his birthday which fell last Thursday.

We met Eddie (affectionately known to many by the nickname of ‘Crazee’) at Cholo’s on our first visit to Ambergris Caye in 1998 when he was an instructor for Amigos Del Mar and struck an immediate and long lasting friendship. Being invited to his home to celebrate this special day with him and his family and close friends cemented the friendship even more.

The food -cooked by Eddie and his wife Ina -was scrumptious. Lobster, fish,chicken, ceviche, salad, vegetables and the best chimichangas (vegetable) I have ever eaten. I didn’t take ‘photos because (as far as I’m concerned) it would have been rude. You’ll just have to believe me that it was good, seriously, seriously good.

Yesterday I was up bright and early again (its just what I do) so that I could have a couple of hours of ‘me time’ out on the veranda before heading to work at my new job at Pelican Properties/Belize Real Estate – the weekly team meeting.

My reverie was broken, however, when I heard a sound in the back garden. Looking out over the veranda I saw a couple of racoons running along the sea wall heading towards the northern fence. Grabbing my camera (see Mike, I kept my promise) I managed to grab a few shots.

No time to enjoy nature for too long though, I had a breakfast to eat. Yes, Estel’s Dine By the Sea again. Oh if only they operated a token collect system. You know, collect ten tokens and get your eleventh breakfast free! 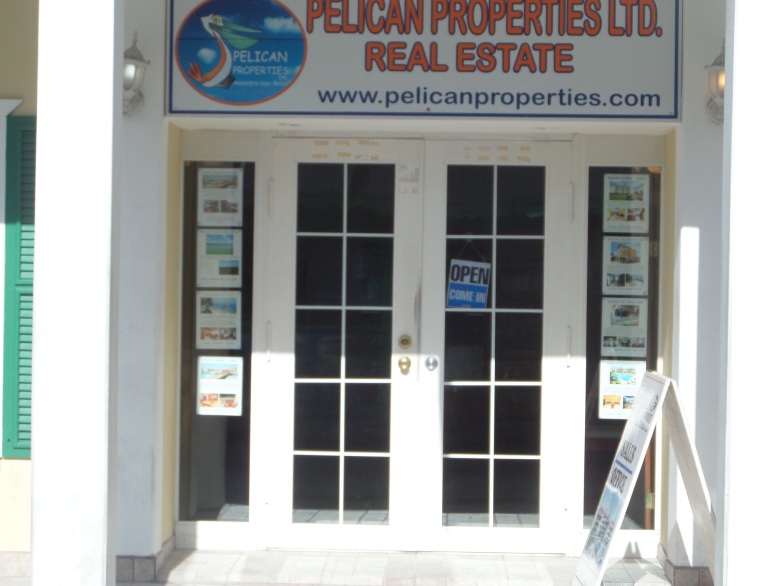 for the 09.00 hours meeting where we discussed the previous week’s efforts and what the current week’s objectives are.

I hadn’t been home long when my iPad started making funny noises (Rose set up the various alarm notifications). I thought it was a fire drill but Rose very quickly told me it was to let me know that someone was trying to contact me via FaceTime. And she was right. It was my sister calling from England.

It got better though because she had one of her daughters , her son, his partner, Mia our great niece (and she is GREAT) and Cody, one of our great nephews with her.

Cody is wearing the skeleton costume and Mia the headdress.

We spent nearly two hours talking to everyone and showing them around our new home. It was great and reminded me of just how fortunate we are.

After the call was over, with the thoughts of how lucky we are still with me, my thoughts turned to a reader of the blog I lost last week.

Now since I stared writing this blog I’ve lost some readers. I’ve upset one or two people (not intentionally) and my writing style hasn’t appealed to some. I accept this. But this loss I actually feel quite deeply.

I hadn’t long started the blog when a lady by the name of Marsa Hightower started to send the occasional comment. This communication developed to the point whee we became Facebook friends and eventually exchanged email addresses.

Marsa was a long-time lover of Belize and had visited Ambergris Caye many times. She was due to retire very shortly and was going to relocate to Placencia but was going to visit Ambergris Caye and we were going to meet at long last. This was something that I was really looking forward to.

I was looking forward to hearing about her times working with some of the greatest groups of my time (Led Zeppelin being amongst them). I knew that we had a similar sense of humour.

I’m sorry to say that this meeting will never take place because last week Marsa was suddenly and unexpectedly taken from us.

I’d got to know Marsa fairly well and am convinced that she felt you have to live your life to the full. I always have and will continue to do so.

Farewell Marsa. I’m so sorry we never got to meet.

The headline for today’s edition is based on the single released in 2007 by T.I , featuring Rihanna, which reached number one on the US Billboard Hot 100 and number two on the UK Singles Chart.