Some of you (OK none of you -but allow me a little bit of ego) may have been wondering why I haven’t put out an edition lately. Quite simple really, there’s not been much that I’ve felt inclined to sit down and write about.

There’s only so many times (me? I want it to go on forever!) you want to know that I got up early, made a mug of black coffee, grabbed the iPad and headed out to the veranda (the western, lagoon facing one) to enjoy “me time”.

So what’s forced me out of this period of blogging inactivity. A force of nature that’s what.

Yesterday morning I was sitting out on the veranda – probably been there a couple of hours or two mugs of coffee – when my reverie was broken by shouts from Rose telling me to get a machete and the key for the front gate and get down to the Garage on the ground quickly, very quickly. “Why” I called out. “There’s a snake there” she shrieked back. Obvious terror in her voice.

I got the machete double quick and headed downstairs stopping only momentarily to pick up my camera (I just had to!).

As I reached the bottom of the stairs Rose was there pointing at the Garage doors. “There it is” she said. I looked up to see Ziggy around a yard from the Garage doors barking at a snake.

“Open the front gate” Rose cried. “Why?” quick as a flash I replied. “Does the snake want to get out?” I sensed from Rose’s general demeanour (well the scowl on her face actually) that she wasn’t at all impressed with my response. “No” she tersely replied, “A guy from the build next door heard me screaming -good job he did because you didn’t – and is coming in to catch the snake”.

I rushed down to the front gate, machete in hand, to let him in proffering the machete as soon as he entered. He declined, pointing to a stick that he held in his hand. ” I’m Ernesto” he announced, “Where’s the snake”. “In front of the Garage doors” I responded, pointing the way.

Ernesto (we subsequently found out that his real name is Ignacio. Don’t ask. I don’t know the answer) walked purposefully ahead of me (I obviously hung back so that I could take photos. And no matter what anyone says that was the only reason).

“Ernesto” on his way to meet the snake.

Using his piece of wood he expertly encouraged ((in fact I’m sure I heard him sing “I want to reach out and grab ya” (clue for the song title there)) the snake, which he identified as a boa constrictor,to move from it’s hiding place

so that he could pinion it to the floor just below its head. 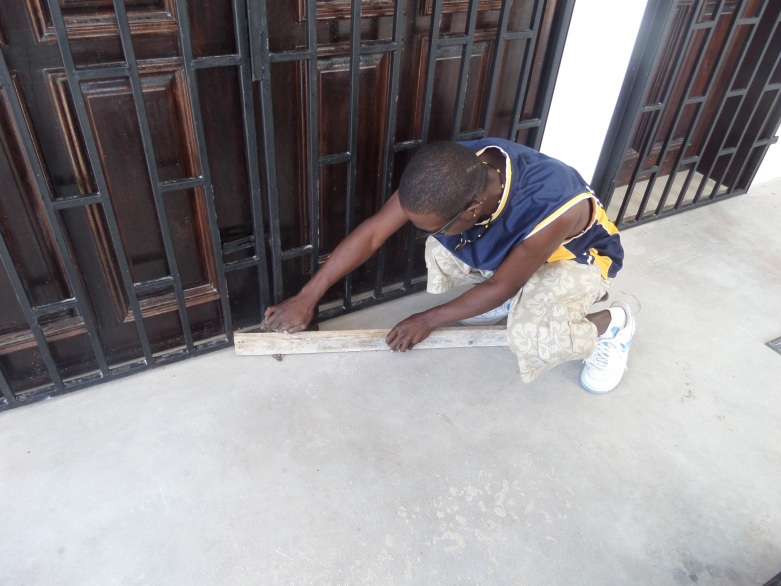 and pull it out of its hiding place. 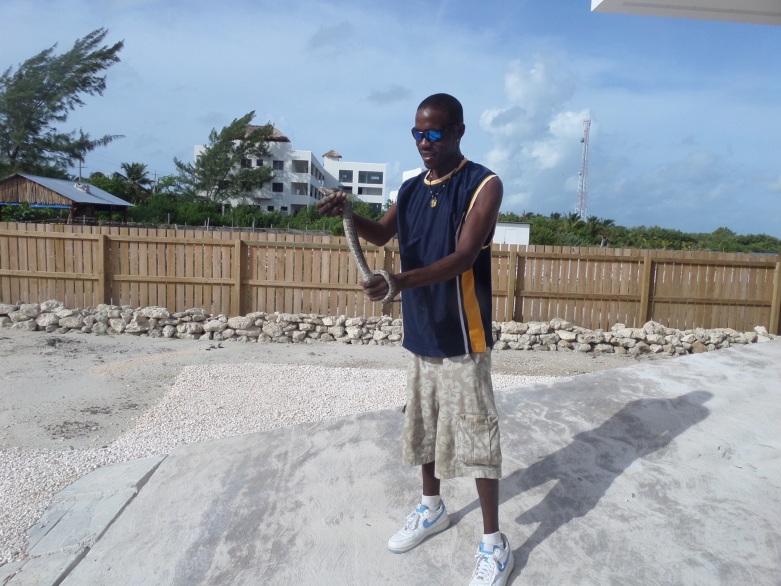 “Ernesto” headed off to the beach to find a new home for the snake a new home and abracadabra the emergency was over.

With the panic over I headed off for 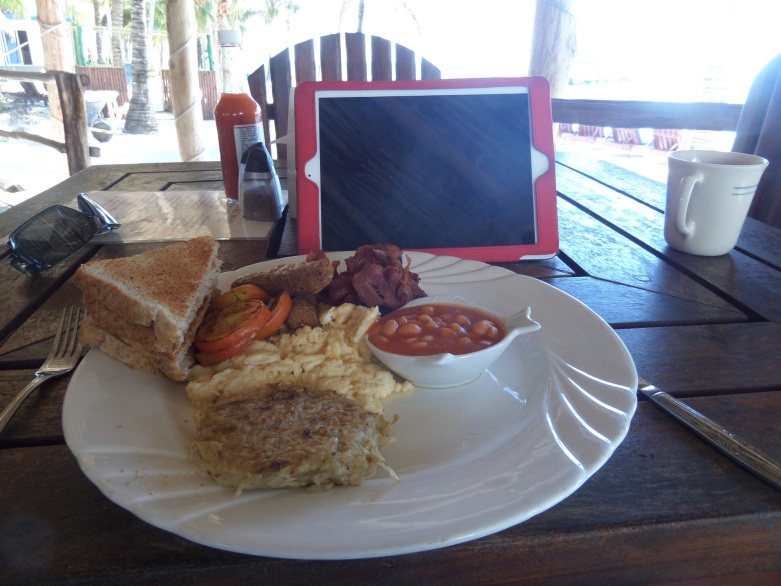 at Caribbean Villas Hotel and admired the view in between bites.

When I got home I tackled the weeds (yet again) but did take time out to watch the ceiling of the water tank/floor for the house being built on the lot immediately north of us.

I’ve already mentioned how organised this build appears to be and how quickly the house is going up. Today they started to lay the blocks and as I write this they’ve just finished for the day.

It’s increasingly looking like they will achieve the target of being finished by Christmas.

The headline for today’s edition is based on the single released in 1982 by the Steve Miller Band which reached number one in the US Billboard Hot 100 and number two in the UK Singles Chart.