I know that I’m relatively new to this blogging malarkey but even if I do say so myself I’ve taken to it like the proverbial “duck to water.”

Commandeer the iPad (not too difficult because John tends to leave his around within easy access of me), whack out a couple of paragraphs. Include a few photos ((OK, I haven’t mastered using either of his two cameras yet (I will though) so I have to depend on others to take them for me)) and, voila – put it “out there” and hope someone reads it.

That’s been the case with my previous few editions but this one? Well, that’s an entirely different matter.

I knew that I was going to be leaving my Dad Frank. He told me a few months ago when he was informed that his time serving as a member of the British Army had been extended by two years that I could not go with him, as we’d planned, to live in Scotland with him.

I also knew that I’d be moving to live with Rose and John on Ambergris Caye. Regular readers will probably remember that I stayed with them for a month earlier this year when my Dad returned to the UK for a holiday.

So I knew what was ahead of me but this prior knowledge didn’t prepare me for how I felt on Saturday morning as Dad and our BATSUB colleagues assembled my worldly possessions and we set off from Price Barracks which has been my home for the last two years to catch the 09.00 hours Belize Water Taxi service to San Pedro.

It felt really, really strange as we pulled out of the camp. I’d been demobbed. I was no longer in the Army. I knew that I was going to a nice new home. Rose (especially Rose) and John are nice people but it couldn’t help me from feeling sad. Very sad. And I knew that Dad felt the same.

The boat trip over seemed to take ages. It didn’t take any longer than usual but it just seemed to drag on and on but then we were there.

And from the rear of the boat 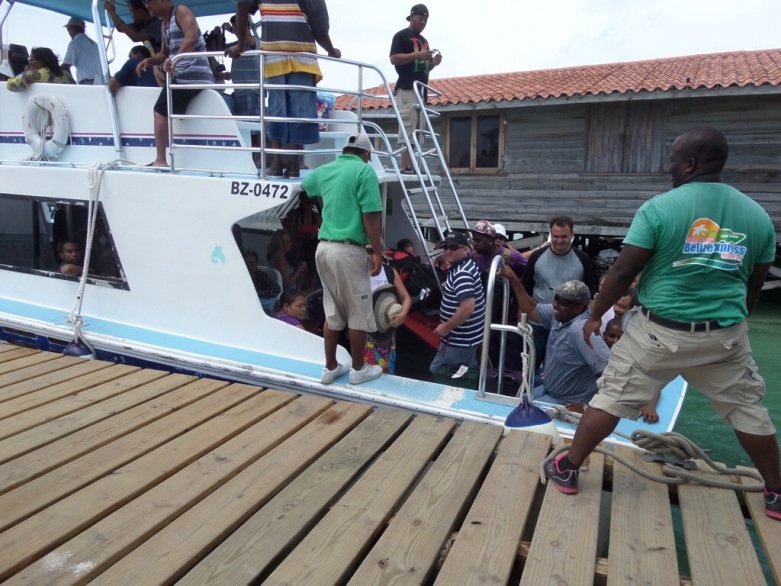 Dad and I could see John waiting for us.

It took a while to off-load my stuff, including my kennel 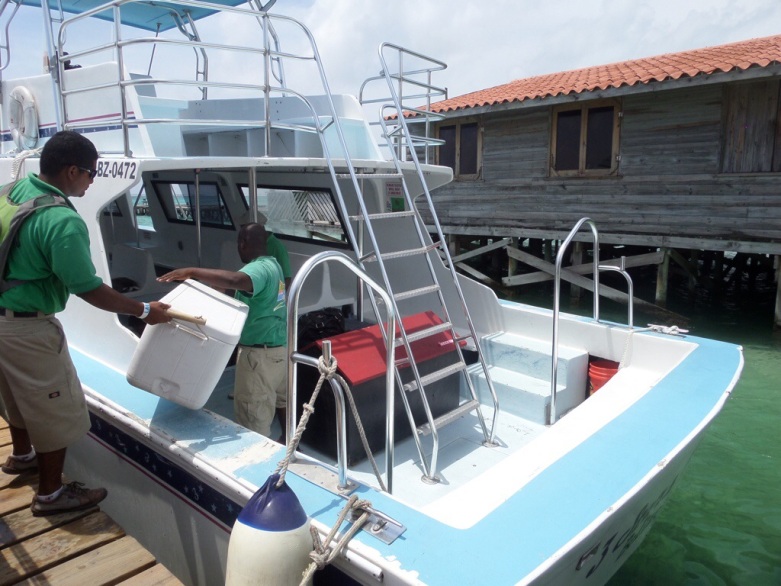 And on to John’s golf cart. 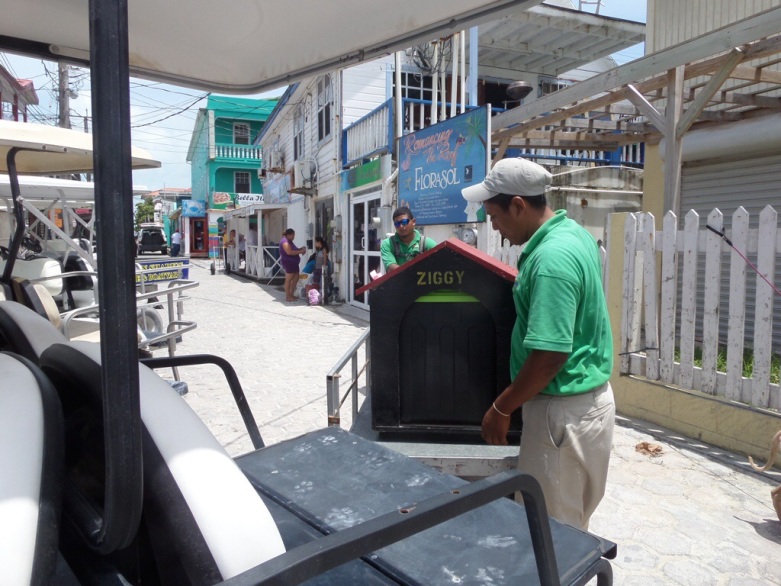 I went with Tod and his Dad Sean to Pedro’s Hotel and John and my Dad Frank took my stuff to my new home. 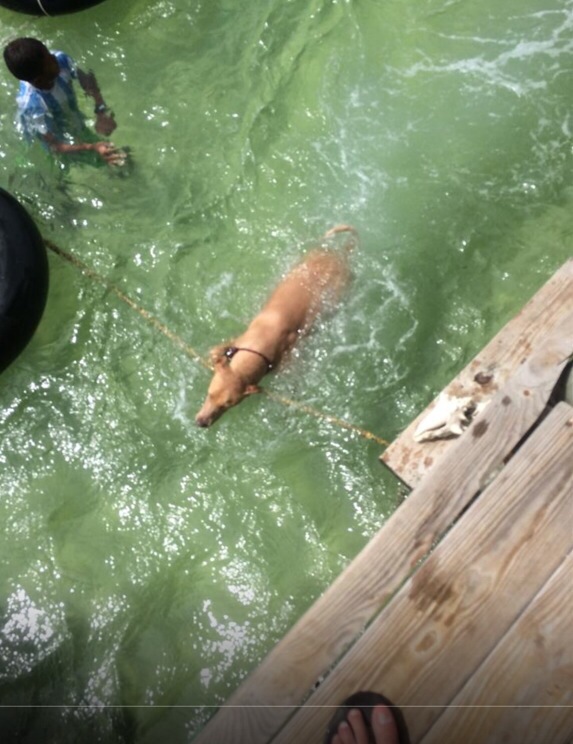 and then I had a bite to eat. 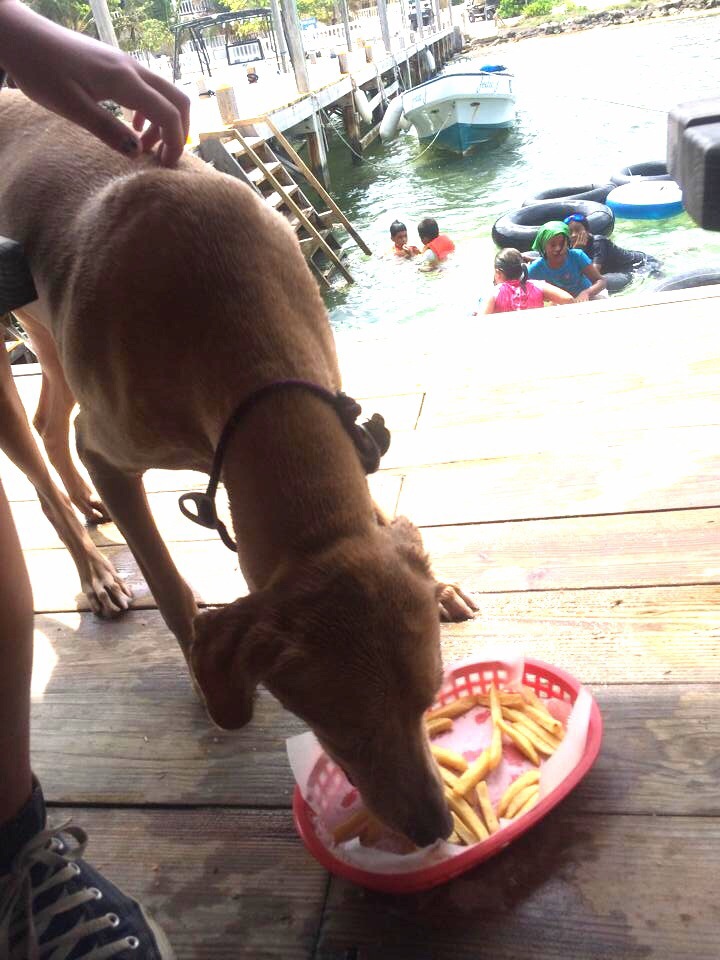 “Not the healthiest if meals but I just knew that I’d run or swim it off!”

But not before I’d shown that I can do the old “Give me your paw” party trick. 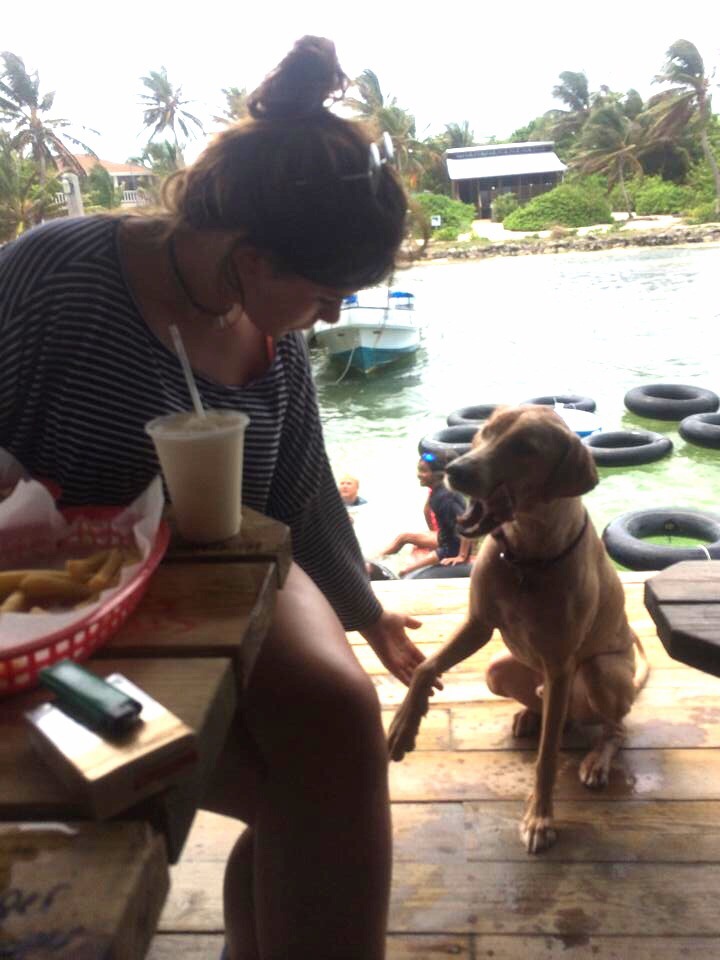 After a good swim it was back to Pedro’s Hotel so that Dad could go on the Poker Run. I stayed in and had a good sleep. I deserved it!

You can’t see them but that’s John and Rose (I like her) racing to the next venue on our golf cart. The back seat is mine, all mine.

The next morning I spent time with Dad preparing to say goodbye. We were both very sad but when you’re in the Army you get used to moving around and saying goodbye. I’m not in the Army anymore so they have taken this dog out of the Army. But … they’ll never take the Army out of this dog!

We then went with Tod and Sean to meet Rose and John at Estel’s Dine By the Sea for a late (well very late actually) breakfast but then it was time to say goodbye to my Dad and Rose and John took me back to my new home where I found that my kennel was on the first floor veranda. The eastern (Caribbean Sea) facing one if you’re interested.

“Not a bad location.”

But I don’t think I’m going to spend much time in there. I think I prefer this!

After a little rest and a drink of water (you’ve got to drink lots of water when you’re in the Tropics) we went to ‘Town again to meet up with Geordie (an ex colleague of mine from BATSUB) and his daughters Jamie and Leah who are over here on holiday.

It was good to see them and it took my mind off of saying goodbye to Dad.

But all too soon it was time for them to catch the 17.00 hours Maya Island Air so that they could get back to Price Barracks and John took them around to the check in desk.

“There’s always time for a selfie!”

The headline for today’s very sad edition is based on the single released in 1996 by Andrea Bocelli and Sarah Brightman which reached number two in the UK Singles Chart.