The day had started so well yesterday. I was up nice and early – around 04.15 hours I think – and out on the veranda within a few minutes with the mug of black coffee and my iPad.

I spent well over an hour devouring every little snippet about the World Cup, and particularly England’s upcoming game against Uruguay, via The Times online. This was an important day. No, a vital one. I needed to be prepared. To have all of the facts at my disposal. There could be no room for error. It mustn’t all end in tears!

A leisurely shower (we’ve had some rain recently so I’m not worried about the tank below the house being empty), followed by an even more leisurely shave (wouldn’t want to cut myself, would I), a scrub for the molars and the selection of my wardrobe (which pair or shorts and polo shirt – decisions, decisions!) and I was ready to hit the road for breakfast at Estel’s Dine By the Sea. I mean you wouldn’t want to send a man to the gallows on an empty stomach, would you! 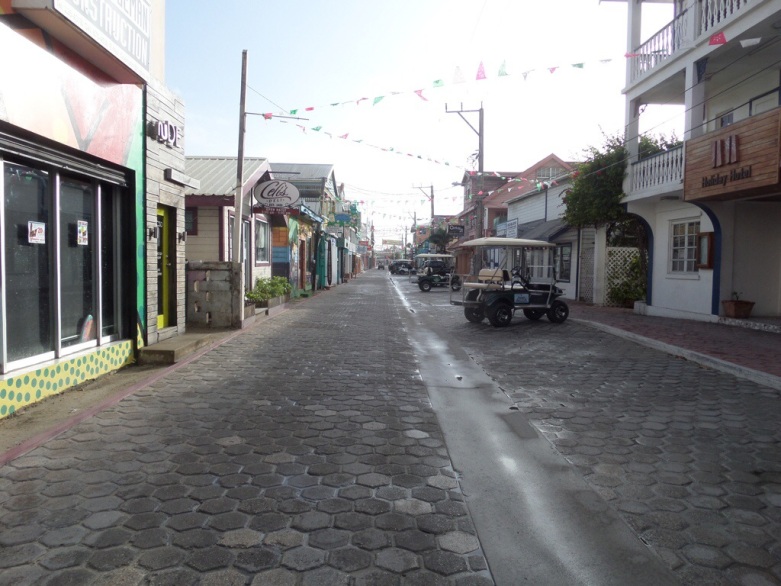 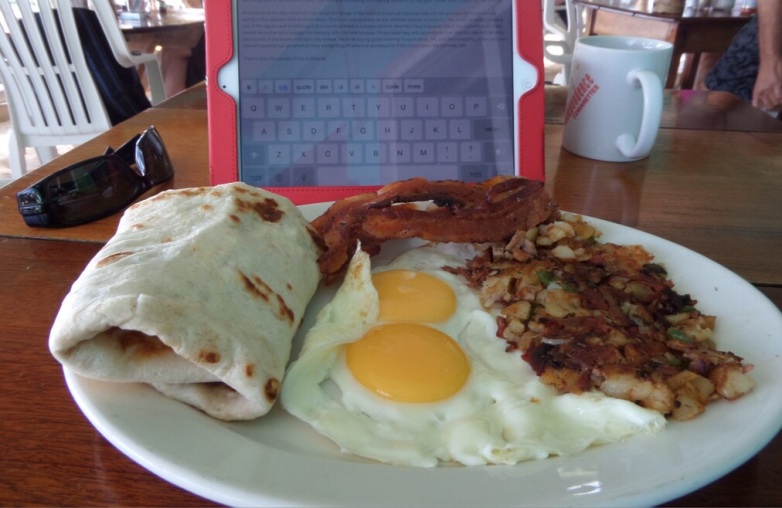 My breakfast. Looks good, doesn’t it.

And the view was pretty good too.

After a while of just taking in the views – whichever direction you point your eyes in is good – I achieved a state of serenity. I was in the right frame of mind for THE game.

Around 11.00 hours Rose and I headed north to Grand Caribe. We were going to meet Kathy and Ron Chavis.

Kathy is a reader of this blog (Ron may be too but he didn’t mention it – if you aren’t Ron, you should be!) and some little while ago she Facebooked me (is there such a thing?) to let me know that when she visited Ambergris Caye she was bringing a present for Ziggy.

When we opened the bag that Kathy presented us with we were overwhelmed. There were gifts for all of us.

A collar and lead

For Ziggy. Or are they for me?

And a matching bandana and

And the coup de gras 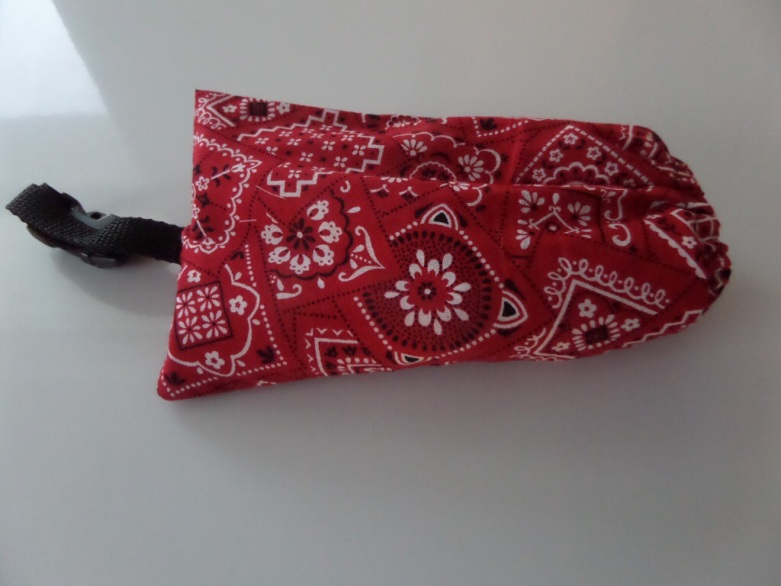 They should keep her quite for a while! Only kidding Rose.

And what about me, you’re thinking. Well … 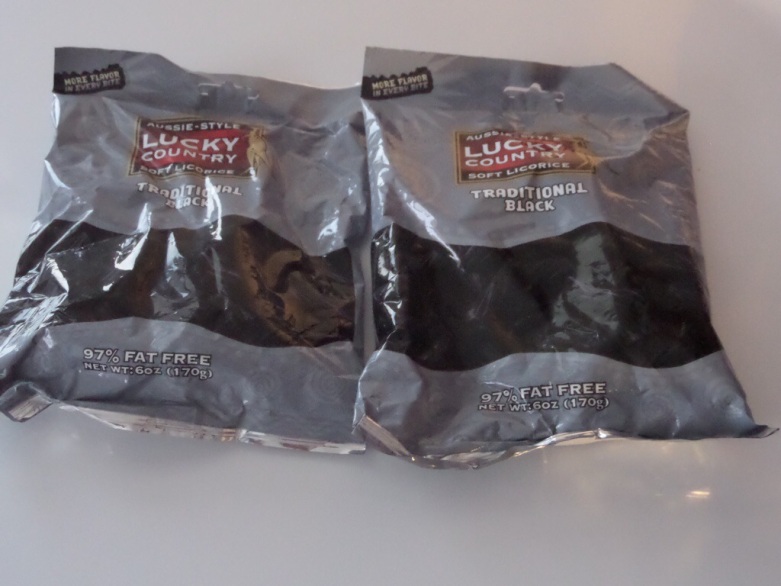 It’s alright Rose, you will get some. And Ziggy too if there are any left when he rejoins us.

Thank you again Kathy and Ron (if you’re reading this) for your amazing generosity.

We gave Kathy and Ron a lift in to ‘Town so that they could connect with the trip on the Reef Runner Glass Bottom boat they had booked and then Rose and I headed to Carlo & Ernie’s Runway Bar & Grill. The BIG match awaited. 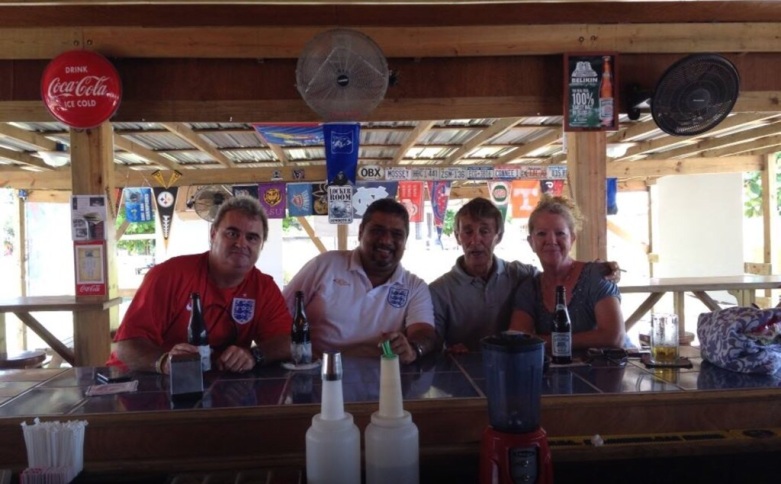 The English crowd starts to build.

The players come out on to the pitch. 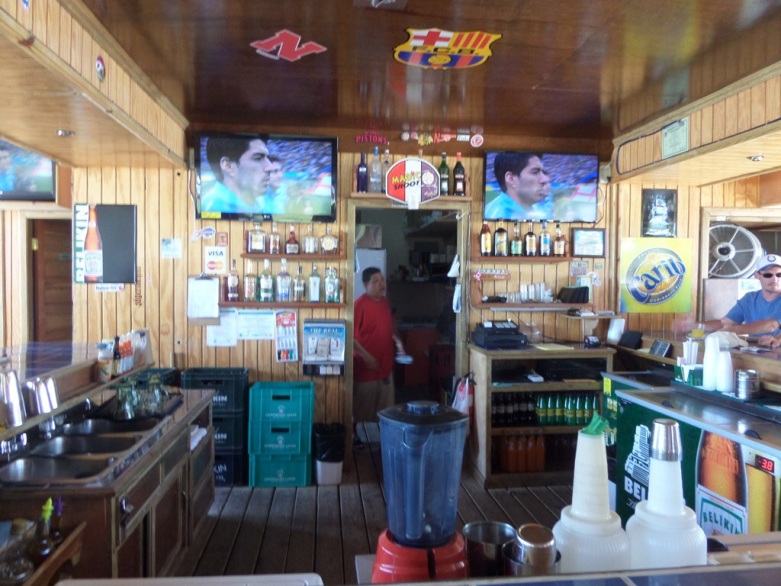 The crowd had swelled 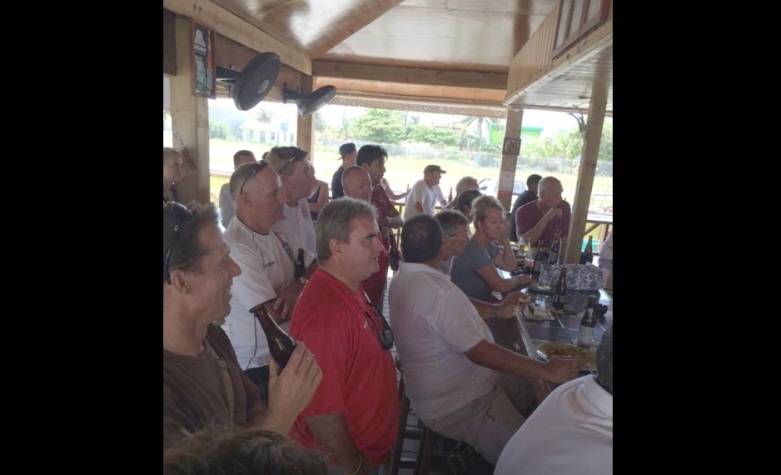 England went one nil down to a Luis Suárez goal and then it was half time. Time for lunch. 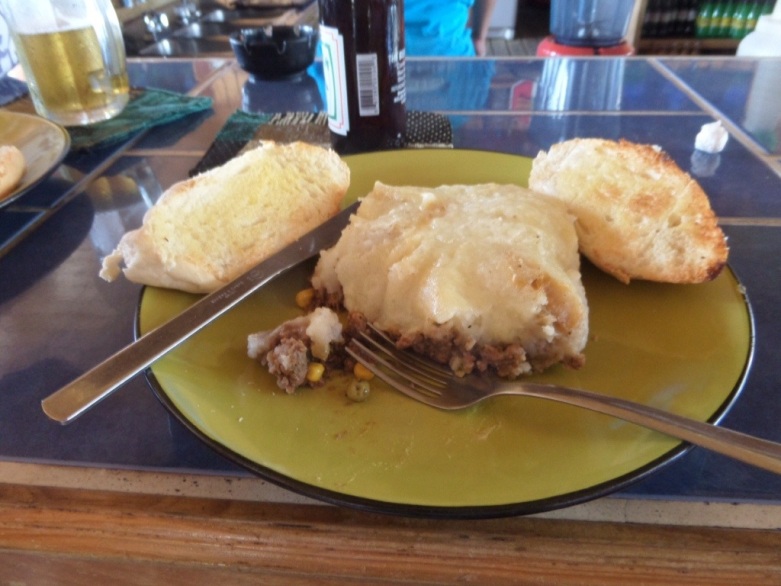 Cottage pie courtesy of “Chef” Carlo. And very good it was too.

The second half kicked off and England drew level with a goal by Rooney. Our hopes were revived. Could we get a winning goal or would we hold out for a draw? But no. Suárez struck again. Our hopes were dashed. The whistle blew.

Our hopes were dashed. I feared that it might end in tears and it did. Head bowed I looked down at the bar and there they were, the tracks of my tears. Only one thing for it.

We still have the slimmest of chances of making it to the next stage but it depends on other results. Oh well, only four years to the next one!

The headline for today’s edition is based on the single released in 1965 by The Miracles which reached number sixteen in the US Billboard Hot 100 and number nine in the UK Singles Chart.