With a forty-five thousand gallon rainwater collection tank under our house I really shouldn’t have been concerning myself with thoughts (concerns?) over whether there was enough water to last until the rainy season begins.

I think its a general trait though that the older you get the more you think (worry) about whether you have enough of ‘this’ or ‘that’. Whatever ‘this’ or ‘that’ might be.

Well I don’t know about you but when I was young I rarely expended much more thought or effort thinking about the future than what I was going to do that day or night. Or, if I was really in a forward thinking mood (rare by the way), I might have given some thought to what I could do at the weekend or where I might like to go for my summer holiday. But that was about the full extent of my contemplation.

This predisposition of thinking of and planning for not much further ahead than the next weekend diminishes as each year goes by. For me it started when I decided that I wanted a car and it then progressed to wanting my own house. The years passed by – and oh don’t they pass by quickly the older you get. I know they all contain 365 days (leap years aside) but …. Well I’m sure you know what I mean- and then the focus was on retirement. Did we have the right pension plans? Could we up sticks and move to Ambergris Caye, Belize?

Well long-time readers will know that we did make the move to Belize and in fact in just nine dats time we will celebrate our second anniversary of landing on the island. So, mission accomplished, plan executed. Now only time will tell if all of the deliberations surrounding pension planning prove to have been correct.

But now I don’t worry about the pensions. Maybe I should, but I don’t. Oh no. I worry about whether we have enough water. Will the water we captured during the rainy season last us through the dry season? Or will I have to organise a delivery via Belize Water Services?

Why don’t I just check the water level in the tank, you’re thinking. And if you are then you have a valid, and very practical and common sense view. But then I’ve always liked a gamble. I am the gambler! I must admit, however, that I was starting to doubt the wisdom of the bet I had made with myself (can’t lose really, can you!) until the rain came down last Saturday. I still had some remaining doubts (concerns I suppose) until yesterday when I was sitting out on the veranda – yes I had my mug of black coffee and the iPad with me – and just before 06.00 hours the sky became very grey and down the rain came (stupid expression really because I’ve never seen it go up). 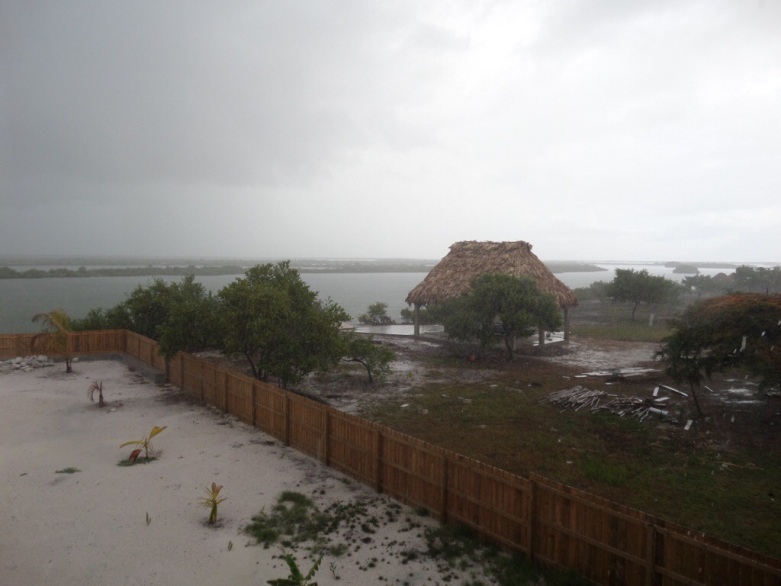 Looking in a north westerly direction. 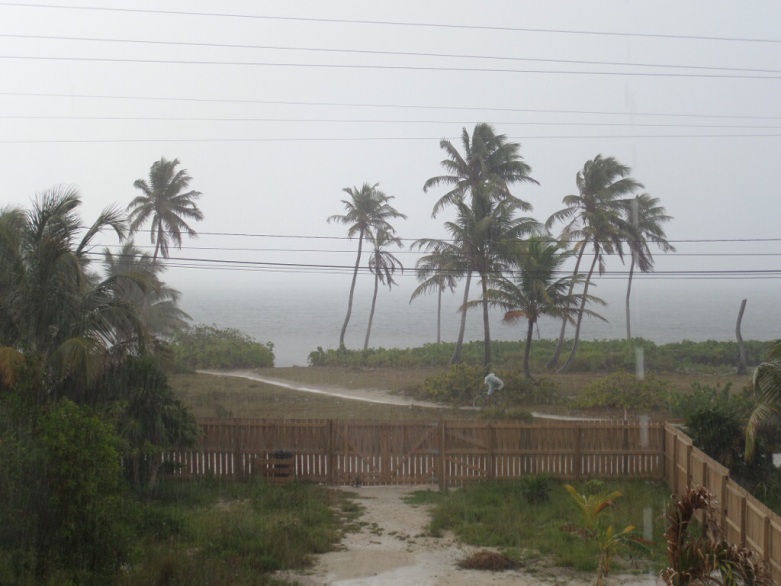 Looking east over a very grey and choppy Caribbean Sea. Note the guy on the bike. Obviously a Boy Scout – he was prepared!

And then the sight that I really enjoyed 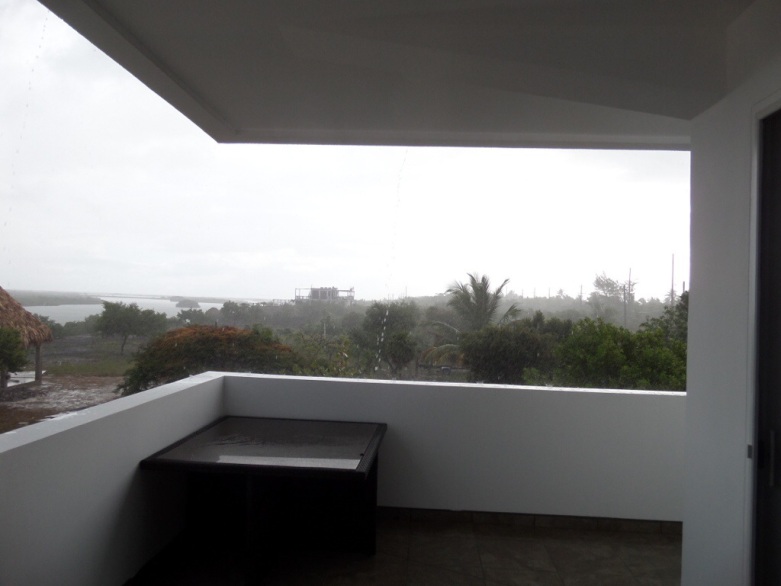 the veranda overflow pipes going in to action!

The rain abated for a while and I took advantage of this to head in to town for? Yes, you guessed it, breakfast at Estel’s Dine By the Sea. and was pleased, and pleasantly surprised when I got there to find that I had the choice of which table to sit at. Why so pleased? I expected it to rain again, that’s why and there are only two tables at which you have a good chance of keeping dry when it rains. So I (I’ve frequented the place enough to have learnt something) chose one of them.

Good choice because within minutes of getting my order the rain came down again. 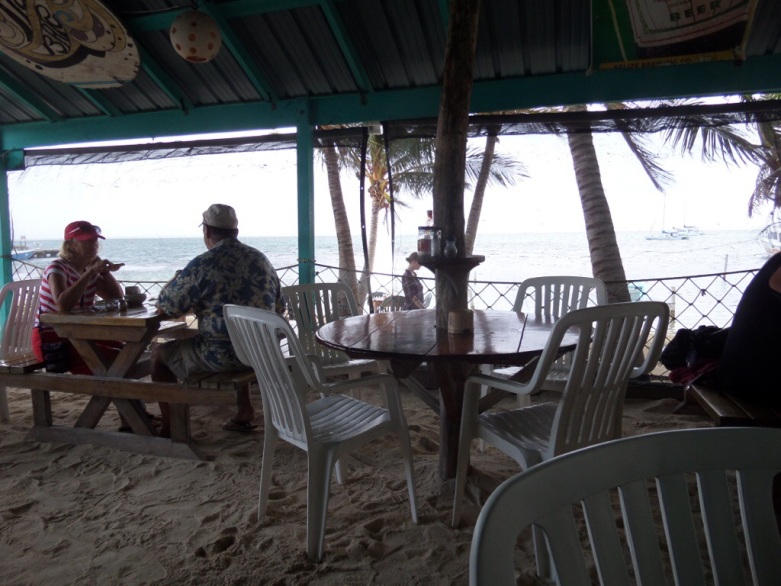 but from my seat at one of the central tables near the doorways, I kept dry. The same could not be said though for the people at tables closest to the beachfront!

With breakfast over I went to RF & G Insurance agent’s (Southwind Properties) office in Barrier Reef Drive to renew the insurance for the golf cart and then on to the a San Pedro Town Council’s office to renew the pass for the Sir Barry Bowen Bridge. Well, I didn’t go to ‘Town just for breakfast (that’s what I told Rose anyway!). 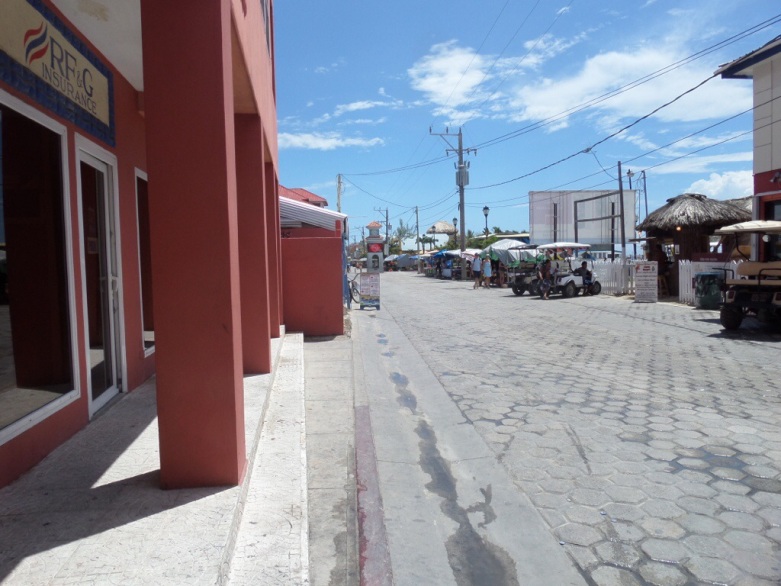 RF & G office in a , by then, very dry and sunny Barrier Reef Drive.

When I got home I found that Rose had made good use of her time whilst I had been absent. She’d made herself another bag. 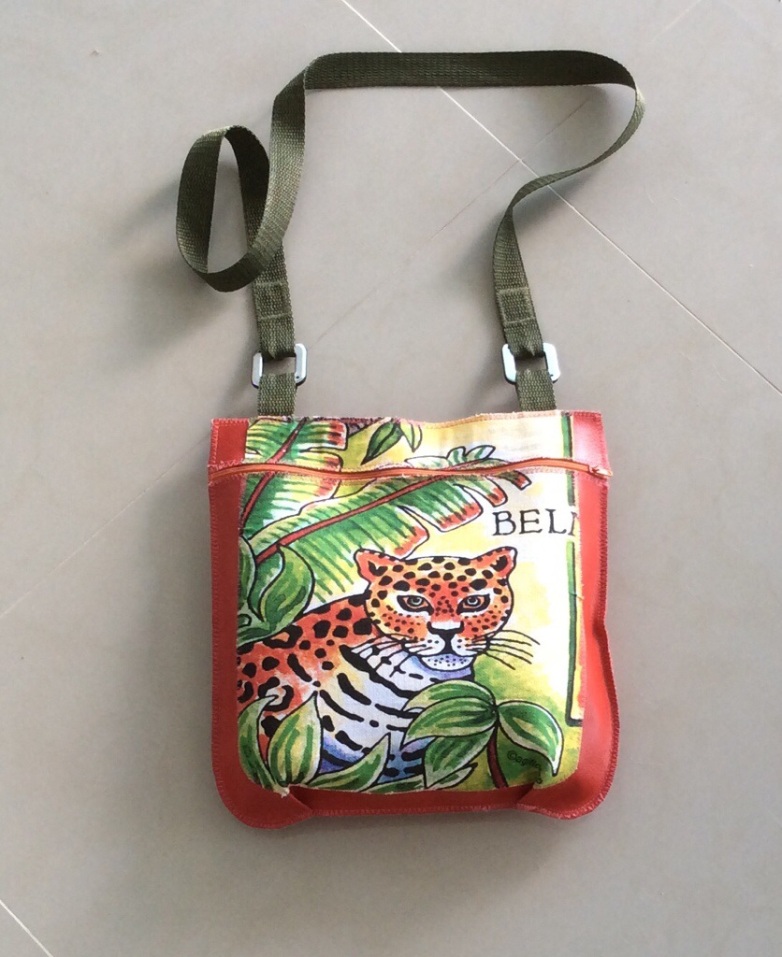 Her latest very colourful creation made with material sourced locally, which if I do say so myself (and not because I have a strong leaning towards self-preservation) demonstrates just how talented and creative she is.

I hadn’t been home for too long when Lloyd ( remember him? He built the rock walls and land filled our adjacent lot for us) came to the house to discuss the work that we are going to have done on the garden. Essentially this will entail a hell of lot of weeding, a little bit of sand fill and the laying of a gravel path from the front gate to the ramp. He’ll come back to us in a few days and then we can start haggling!

Lloyd hadn’t been gone too long when Edward turned up. Do you remember Edward? No. Well Edward is the guy that Rose and I have bought quite a few plants from and he had a few more for us this time but you’ll have to wait until the next edition to find out what plants he had to sell. And if we bought them. Is the suspense killing you? Tough!