Sitting out on the first floor western (lagoon facing) veranda last Friday morning with the ‘must have’ mug of black coffee (unsweetened) , my iPad and Ziggy the drop in temperature was quite noticeable.

I’d heard a few days before that a cold front was on the way and the previous night before we went to bed the first signs of it were apparent. The temperature had dropped slightly, the wind from the north-west had whipped up and there were spasmodic flashes of lightning. The lightning was obviously followed by rain at some point during the night (I haven’t got a clue as to what time this might have been because by then I was dreaming of Thomas Vermaelen, the Arsenal captain, holding the FA Cup aloft) because there were small puddles on the veranda and (it may have been caused the the infusion of caffeine) there was an iridescent quality about the lagoon.

Nearly stationery (well you don’t move that much using an iPad or picking up a mug of coffee) in my chair on the veranda I could feel the cold front. And I had a cold back too to prove it. I wasn’t tempted to go grab a sweat top because although I must have acclimatised to some extent I still find it warm here even when the temperature drops.

On the drive in to ‘Town for breakfast (where else but at Estel’s Dine By the Sea) it was obvious that the locals were feeling the cold with many of them attired in sweat tops and hoodies. Not so cold though that it prevented some of them mounting a charity drive in Pescador Drive for a young child requiring medical treatment.

There’s little doubt that the island has its less savoury aspects with fairly frequent (well, one is too frequent) incidents of burglary or, worse still, shootings. But it has its redeeming side too and the manner in which the community rallies together to help the more needy demonstrates very forcibly and tangibly that on Ambergris Caye there is a community with heart and compassion. A sizeable number of people that care and are willing to get up and do something. A facet of human nature that I didn’t experience too often in my previous home of London in the UK.

This state of euphoria took on a change for the worse though when I got home and I was reminded of something my Dad very often said to me. “Don’t shit on your own doorstep son” he used to say. He wasn’t a particularly well educated man. He could’nt read or write very well. He didn’t say a lot. But when he did say something it normally made sense and was sound advice.

So why was I reminded of this? Well when I got home I spent some time on the first floor’s eastern veranda and whilst there I saw a golf cart driven by an expat living at Barrier Reef Resort pull onto the beachfront lot directly opposite us. Nothing strange about this, loads of locals and tourists alike do the same thing. It’s a great view from there. But then I saw that the dog sitting on the front seat was ushered off the cart by the expat to ‘ do its business’. And it did. Twice.

The expat then did no more than call the dog to get back on the cart. And it did and she drove back in the direction of where she lives. No thought let alone an attempt of clearing up after her pet. Now I know what my Dad used to tell me but in her case he would have said to her “Do shit on your own doorstep. And clean up afterwards”.

Now I don’t know if this lady reads my blog but if you do (and I hope you do) why don’t you clear up the mess after your dog. The area you chose as its toilet is used by many, many people for far more pleasurable things. Your actions are selfish, thoughtless, unhygienic and just damn lazy.

I’m pleased to say that the sour taste in my mouth didn’t remain with me too long because in the late afternoon, after preparing the ground floor apartment for them, Rose and I went to ‘Town to collect Frank (Ziggy’s ‘Dad’) and Graham who arrived on the 17.30 hours Maya Island Air flight from the Municipal Airport.

I was pleased to see Frank again and really pleased to meet Graham for the first time but this pleasure was intensified when, upon getting to our house, Frank (only after Ziggy had licked him frantically) opened his rucksack to reveal that he had a present for me.

The sweets (candy for non UK readers) were a present from Ian who, after serving as a member of BATSUB for eight months, has returned to the UK. THANK YOU Ian for these ‘delicacies’ which I will eke out for months (that is as long as I don’t let Rose get her hands on them!).

In the evening all four of us went out for a bit of imbibing. Well it would have been ungracious not to have done, wouldn’t it!

After a good night’s sleep we were all ready for a breakfast before the FA Cup Final ,featuring our team Arsenal,started and we were joined for this by Peter (aka Pedro of Pedro’s Hotel) who is a fellow Arsenal fan.

Now the breakfast at Estel’s is good -in fact very good- but the fayre of scrabbled eggs, Cumberland sausages, bacon, beans (Heinz
of course) and toast that Rose presented us with was the perfect preparation for the drama and excitement that lay before us. Especially when it was supplemented with champagne.

We all settled down to watch the game but within eight minutes we were (well Rose, Peter and I were anyway) wallowing in the depths of despair as Arsenal went two- nil down.

It looked like it was all over before it had really begun until Rose suddenly jumped up and ran upstairs, returning very quickly wearing an Arsenal shirt. Within minutes Arsenal scored.

Arsenal continued to press, and press hard, for an equaliser but try as they might it just would not come. Rose, deciding that drastic action was required, jumped up and once again ran up the stairs, returning within minutes having changed to wearing an Arsenal tracksuit top.

Would it work? Yes it did because within minutes Arsenal got the important second and equalising goal. Game on!

From that point on it was ‘all’ Arsenal (yes, I am biased) but try as they might they couldn’t get the third goal and the game went to extra time and it looked as if the match was going to be decided by penalties.

Rose jumped up again. What could she do? I knew that she didn’t have any more Arsenal apparel.

Rose – of course – knew this too but she is ‘ not just a pretty face’! She returned with her toy cat (I know she’s old enough to know better but …) named Rosiky (for those of you that don’t know Tomas Rosiky is an Arsenal player) and it worked. Aaron Ramsey scored a sublime goal in the 109 minute of the match. Time to finish off the champagne and start on the Belikin!

Yes, there were only five of us!

and then it was time to ‘hit’ the road to go to the Belize Water Taxi dock. 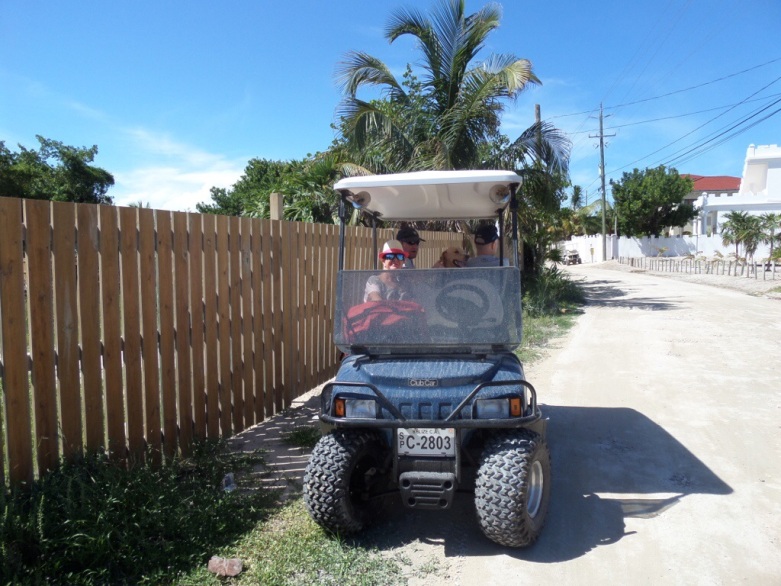 Rose with Ziggy whilst Frank bought the tickets.

We both know that Ziggy is coming back but for Rose the parting was just too much, the teardrops started to fall.

Heading to the boat. 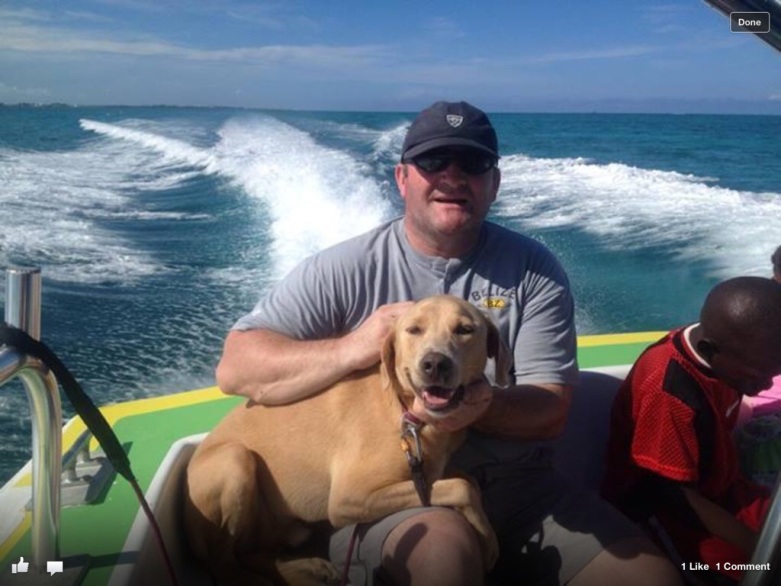 The headline for today’s edition is based on the single (a great rendition if you haven’t heard it) released in 1988 by Womack & Womack which reached number three in the UK Singles Chart.