Ziggy here because John is taking the day off today. He mumbled something about writer’s block before the iPad was pushed my way. So here I am out on the veranda (the larger one facing the lagoon) with my bowl of water (no additives) and this borrowed iPad.

I didn’t start on this edition straight away though. Oh no. I mean I’ve waited nearly two weeks to collar the iPad and I was able to spend a little time on Facebook -it was good to see how my new found friend Scruffy Potlicker is settling in his new home in Minnesota (wherever that might be)- and then respond to some emails. With the administrative stuff out of the way I logged in to my subscription to Modern Dog magazine and spent a very enjoyable half an hour pawing (I know its ‘pore’ but this is my attempt at humour) over the pages.

I’m now in to the forth week of my holiday here on Ambergris Caye with Rose (she’s the really nice one) and John (he shouts at me sometimes) and I must say that I’ve had a thoroughly nice time and I’m pretty well convinced that I want to come back and live here permanently when my Dad, Frank, moves to Germany for his next posting with the British Army.

I think I’ve done enough to make them want me to come back. For a start when they let me sleep inside at night I immediately stopped scratching the front door. I didn’t enjoy causing damage like that but the doleful eyes just didn’t do the trick when they decided it was time for bed. They were very dogmatic about it until I ‘hit’ on the door idea. They were determined but so was I. See, doggedness does pay off!

I’ve now got virtually a free rein of the place. I’m not allowed in the kitchen and Rose has put a ‘no go’ sign on the floor to remind me 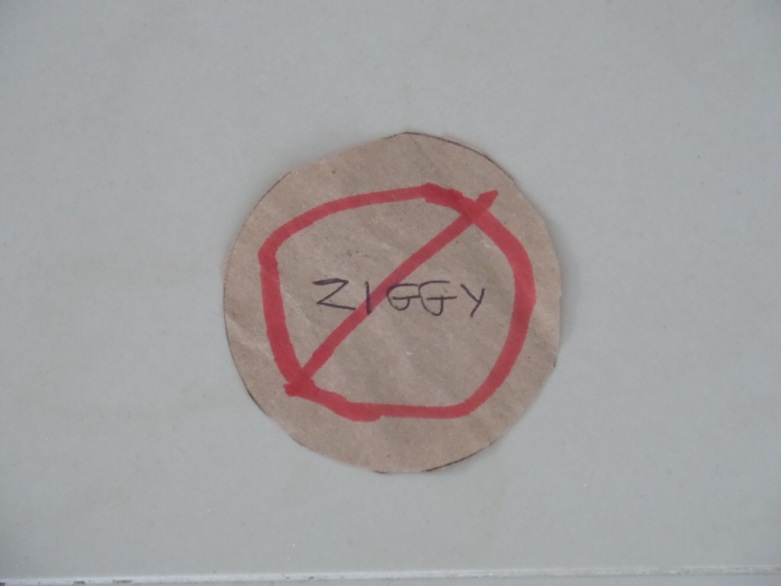 and I’m not allowed in their bedroom. But I can ‘live’ with it. I mean it’s not as if there’s a pawcity of other rooms for me to go and explore. And then there’s the veranda! I love it out there. I get a great view of all that is mine – well it will be come August – and the breeze is great. It’s also a fantastic vantage point for iguana hunting. For all of the iguana lovers out there don’t worry, I haven’t caught one yet. I’m getting closer though! 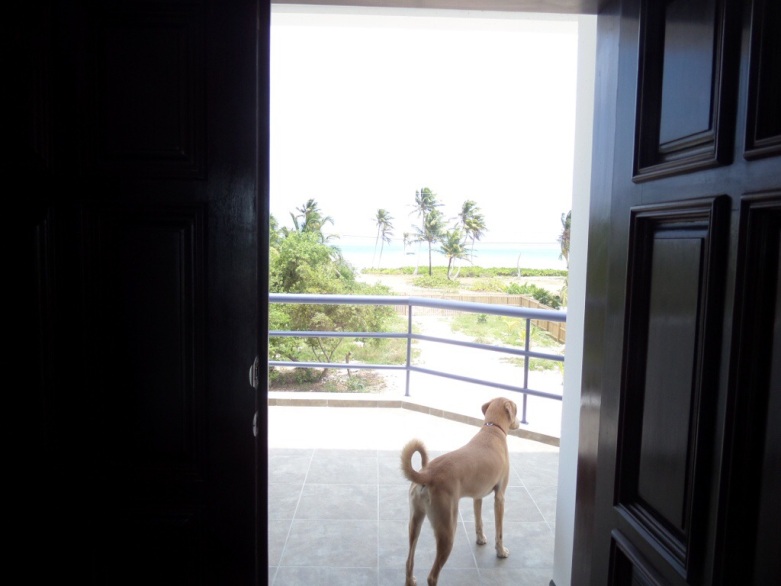 a catamaran close to the shoreline that had either experienced engine trouble or had got stuck in the shallow water. 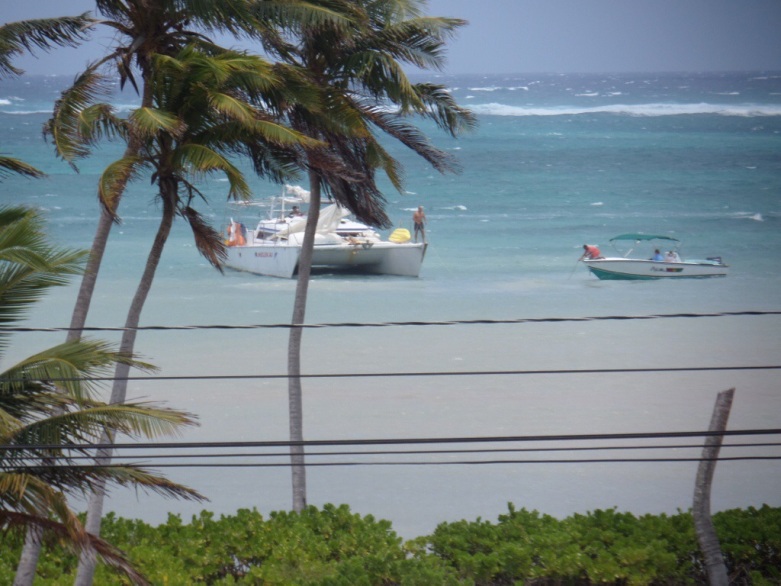 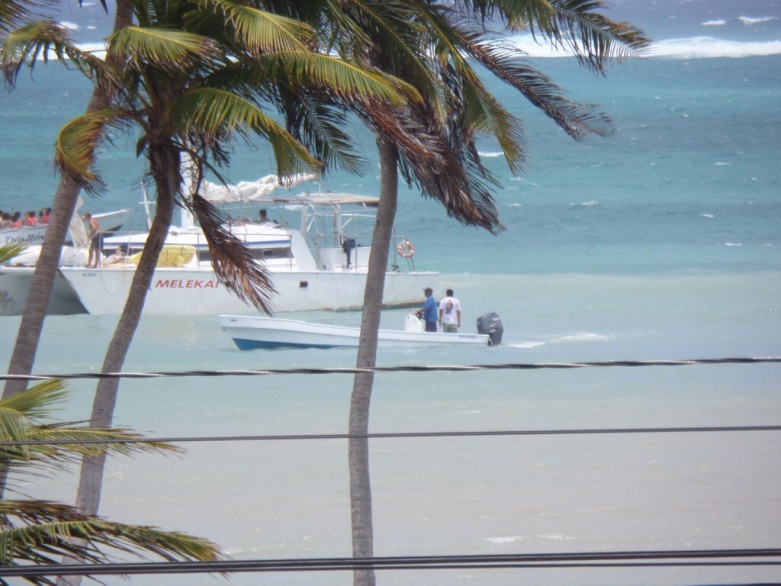 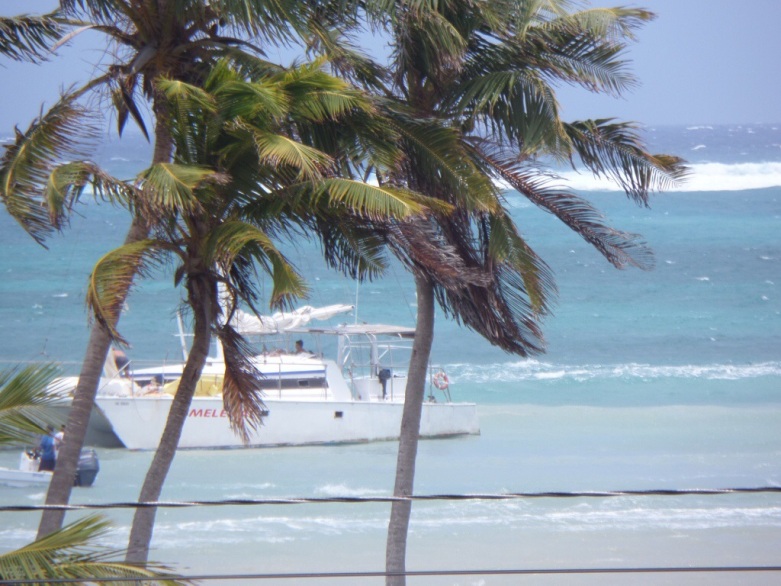 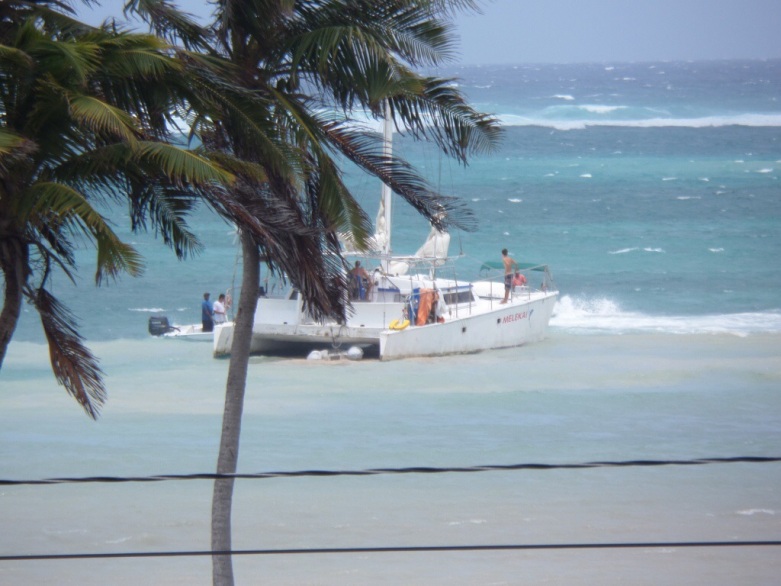 The ‘rescue’ boats gave up after awhile but by then I was getting bored and went to chase iguanas. Much more interesting. Rose though,and I’m now starting to think of her as more like my new Mom, decided that she’d repair my bed for me. 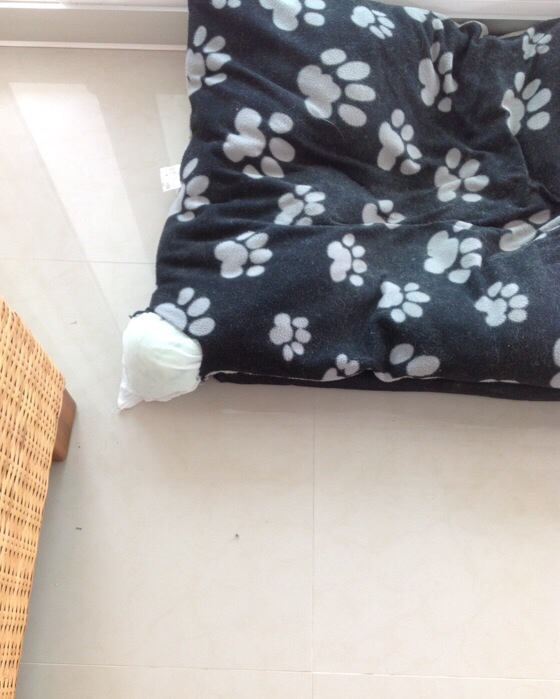 I think that when I was much, much younger I must have bitten it quite a lot and I’ve got to admit that it was looking a little dog-eared. Well it would, wouldn’t it! A couple of minutes of Rose, a needle and some cotton and … voilà (see, I’ve even picked up some French since being here) . It looked like new. 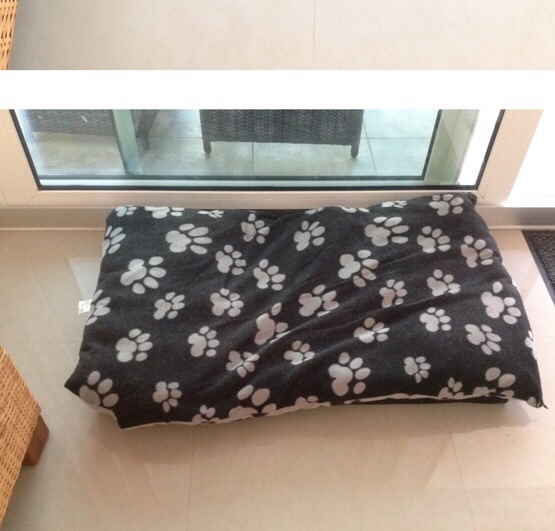 Failing to grab myself an iguana I joined John on the veranda to sit and watch the guys thatching the roof for the house next to ours (well it will be ‘ours’ when I move here permanently). 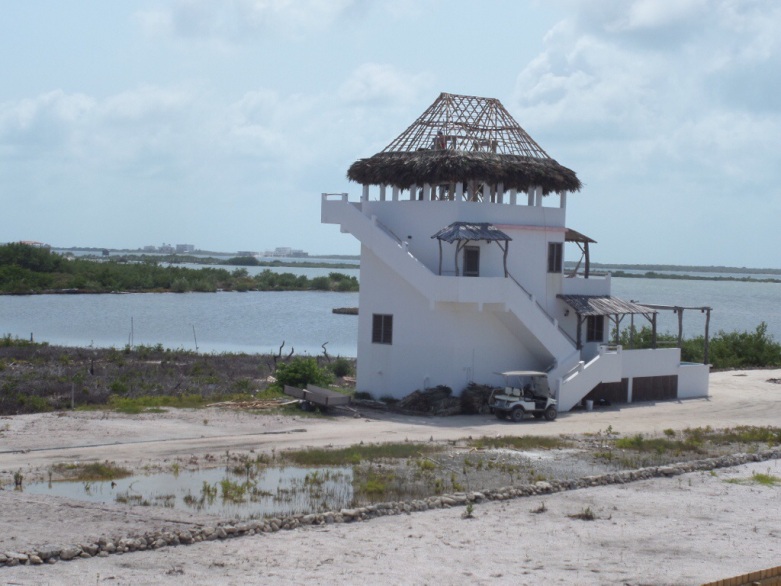 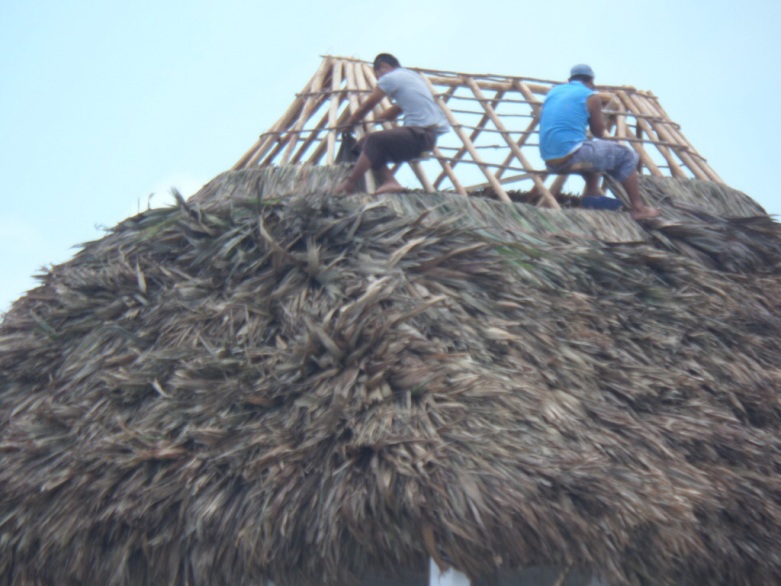 He (John that is) finds it very interesting but I’ve got to admit that I find a couple of guys playing around with bits of trees a bit boring and I was well happy when Rose put on a long sleeved shirt. Why? Well, because this means we’re going to the garden to play catch. This is great fun. Rose throws a ball and I run get it and take it back to her. She throws it and I bring it back. It’s great fun. You should try it some time.

I’m bringing this edition to a close because I just picked up from my Facebook page that my Dad is coming to Ambergris Caye on Friday afternoon to come and get me. I’m really looking forward to seeing him again. Before we head home though we’re all going to watch the FA Cup Final on Saturday morning when my team Arsenal take on Hull City. Apparently we’re all going to have a pre match breakfast and I’ve heard talk of the champagne (whatever that might be) making an appearance.

Anyway it’ll be awhile before I blog again but I just know I’ll be back. This is only a slight paws in my journalistic career.

The headline for today’s edition is based on the single released in 1975 by ABBA which reached number six in the UK Singles Chart and number fifteen in the US Billboard Hot 100.