Sitting out on the veranda- the first floor one on the western (lagoon) side of the house the other morning (yes it was early and I did have a mug of black coffee and my iPad with me ) I didn’t follow my normal routine of ‘going’ straight to The Times online. Instead I just sat there enjoying the stillness and allowed my thoughts to go wherever they wanted to go. And believe me sometimes they can go to very strange places!

I thought about how I really do not miss England. I miss seeing my family (I was going to write ‘of course’ but not everyone misses their family, so I didn’t). I miss going to the Emirates to watch Arsenal (win, draw or even lose). I do (oh how sometimes it consumes my thoughts to the point where my imagination runs riot and I salivate ) miss my visit to a pie and mash shop ( a traditional, working class meal which originated in East London where I was born).

It may not look terribly appetising to you but to me its as good as anything in a three star Michelin restaurant.

I also miss time spent with my best friend. Normally this took the form (probably an inappropriate word to describe the way we acted for two grown men) of an all day bender when we would see how many pubs (and pints) we could visit (consume) until even we could not understand each other ((this usually came some time (pints) after other people found us totally unintelligible !)).

I miss work sometimes but such hankerings are becoming so rare that I truly believe that I can say that I have ‘kicked the habit’ (sounds like the retribution you would take against an errant monk doesn’t it).

So , all in all, there’s not a great deal that I miss about living in England. And one thing is for sure, I definitely do not want to move back there.

We had a fair bit of stuff to take care of (selling our home and boat, disposing of unwanted/inappropriate stuff, sorting out our financial affairs, arranging rented accommodation on Ambergris Caye and, the most difficult of all, saying goodbye to friends and family and doing this kept us busy for a while, and particularly as the day to leave got closer.

And then when we eventually arrived here there was lots to do. Finalising our architectural plans, selecting a building contractor, applying for the Qualified Retirement Program, getting driver licences, hiring a golf cart. And the act of just generally finding out (by recommendation and by good old trial and error) where to shop for this or that.

But the whole thing – the ‘goodbye’ and the ‘hello’ – was (and continues to be) totally worth it. Any thoughts on our part – Rose and me that is- that we made an error of judgement in our advancing age? None whatsoever. Not even a sliver.

And the purpose of this reflection bordering upon soul searching on my part? None really I suppose other than letting those of you who may be contemplating moving here that it isn’t too difficult. And, even if it were to be, it’s worth it. But that, of course, is just my opinion.

Another reason for sharing my early morning thoughts with you might just be that I really didn’t have a clue what to write about!

With my period of contemplation over I showered, shaved, etc and headed to Estel’s for breakfast where – after the aberration caused by Arsenal’s defeat by Chelsea – I reverted to ordering my ‘usual’ of eggs (sunny side up), potatoes, bacon and tortilla.

I just knew that my culinary bravery wouldn’t last. Sanity returned to the world!

With breakfast finished I took a walk along the beach. Well , to tell the truth I took the cart on the beach in Boca Del Rio (you can still do that there) and enjoyed the breeze and the view.

Fully ‘chilled out’ I headed home, grabbed the paint brush and ‘hit’ the inside of the northern fence.

And slowly but surely (and determinedly) worked my way along it

Including the low, back aching inducing bits.

Peer closely and you can just see me behind the tree trunk.

Disregarding the ants and the heat I worked my way along the fence, getting ever closer to the eastern (road side) section) 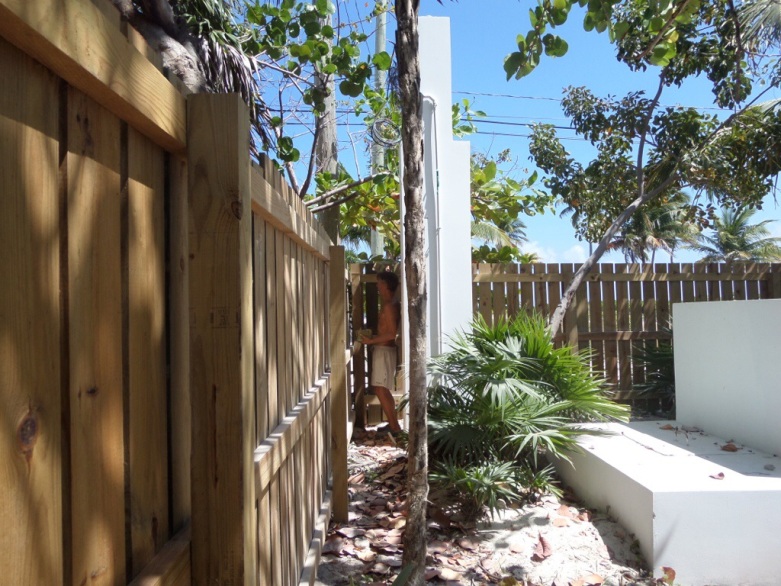 Until I painted the final plank.

Now I can start on the external side of the northern fence when I will be outside looking in.

The headline for today’s edition (and I must own up here, I Googled it) is based on the 2007 single released by Jordan Pruitt which reached number seventy-seven in the US Billboard Hot 100.