Yesterday morning after producing and publishing the edition of the blog from my ‘office’ on the western (lagoon) side of the house I was tempted (oh how I was tempted) to drive to ‘Town for breakfast at Estel’s. But I didn’t have time for that (but you’ve go loads of time you’re thinking). No, Rose and I had stuff to do. We had to revise the Belize Port Authority’s Mariners’ Handbook. 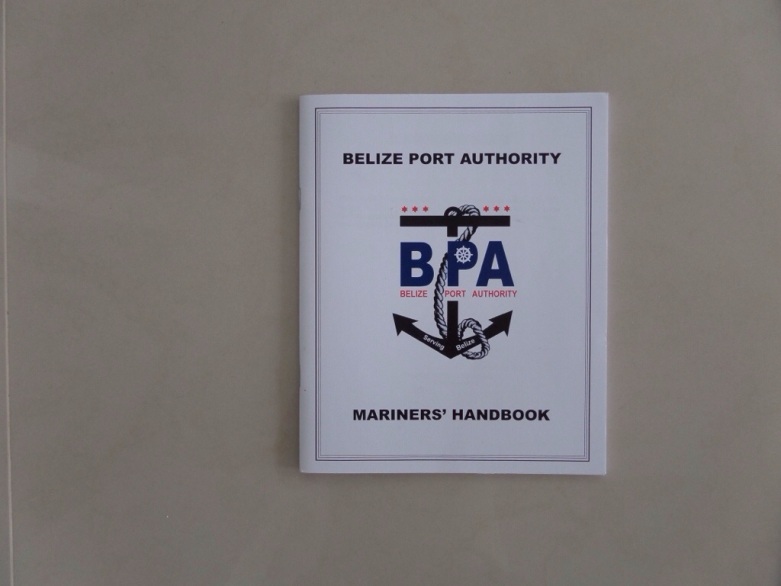 Why would you want to do that when you’ve got a fence to cover with protector you are wondering. Well, number one it was raining. Number two, I didn’t particularly feel like getting the brush out anyway. But, and more importantly, Rose and I were scheduled to take the Theory section of the test/exam for a Master’s License that, once successfully taken, will enable us to drive a powered boat in Belize waters.

A few years ago I would have had no problem in reading and memorising the booklet. Virtually word by word, line by line. But a combination of an absence of regularly using my brain this way and increasing age ((and diminishing grey cells – compensated for (not) by increasing amounts of grey hair!)) has all but taken this attribute away from me. So, unlike years gone by, it was a matter of reading the booklet again and again. And again.

Learning the content of the booklet really shouldn’t have been so difficult . When Rose and I lived in the UK we had the pleasure of owning a boat (OK an inland, river cruiser – but the principles are essentially the same) for over twenty years. In fact had we not moved to Belize we would have it to this day.

We set off with trepidation at 14.10 hours (cannot be precise because I didn’t have the alarm clock with me – it stays in the bedroom) for Caribbean Villas Hotel where the test was scheduled for 15.00 hours. We didn’t want to risk being late and fail to take the test.

As it transpired we didn’t need to arrive so early because Austin Martinez, the Examiner from the Port of Belize, didn’t arrive until around 16.00 hours, however, once he had arrived things moved fairly quickly. In our case he needed to see our QRP (Qualified Retirement Program) identity cards, proof that we had paid our Property Tax and a utility bill. Once he had verified that these were in ‘good order’ we were approved to take the test. A similar (it varies only slightly for a Resident or Citizen of Belize) process was undertaken for the other three people taking the test and then he handed out the test papers to each of us but before doing so he made sure that none of us were sitting too close to each other. As if we would attempt to cheat!!!!

The ‘paper contained twenty-five questions, around half of them being multiple choice answers, and I rattled through them fairly quickly but had a ‘senior moment’ for one of the questions which, for the life of me, I could not remember the answer to. Knowing that I had definitely got one question wrong I had in my completed ‘paper hoping that I would achieve the required seventy percent success rate (I needed to get at least eighteen answers right).

Within minutes of handing in my ‘paper I knew that I had answered one of the questions incorrectly – another senior moment – but I was still reasonably confident of achieving the required number of right answers.

When everyone had handed in their completed ‘papers, Austin, who had moved to a corner of the bar well away from us all, set about checking and marking them and after around fifteen minutes rejoined us to announce the results. Both Rose and I achieved pass marks of eighty-eight percent but after we had reviewed our respective papers felt that Austin had made an error when marking them. We brought this to his attention, pointing out the questions he had marked as wrong when they were right, and after reviewing the answers (to different questions I might add) we had each given he agreed that he had marked them incorrectly so we both moved up to a ninety-two percent success rate and had comfortably passed the theory test.

We now need to take the practical test (the test itself and the practice for it will be covered in future editions) and pass it for us to be licensed to drive motor powered boats up to thirty-four feet in length. I am so looking forward to being on water again, loading up a cooler with boat drinks (Coca Cola of course) and getting some fishing in.

Buoyed with the success of passing the theory test Rose and I celebrated on the way home with a Belikin (or three!)

This morning , not having to worry about revising, I spent some very pleasurable time on the veranda ( I got out there shortly after 04.00 hours – a consequence of going to bed around 22.30 hours the previous night) until the rain started to come down. And I mean COME DOWN.

View from the veranda in the rain this morning. 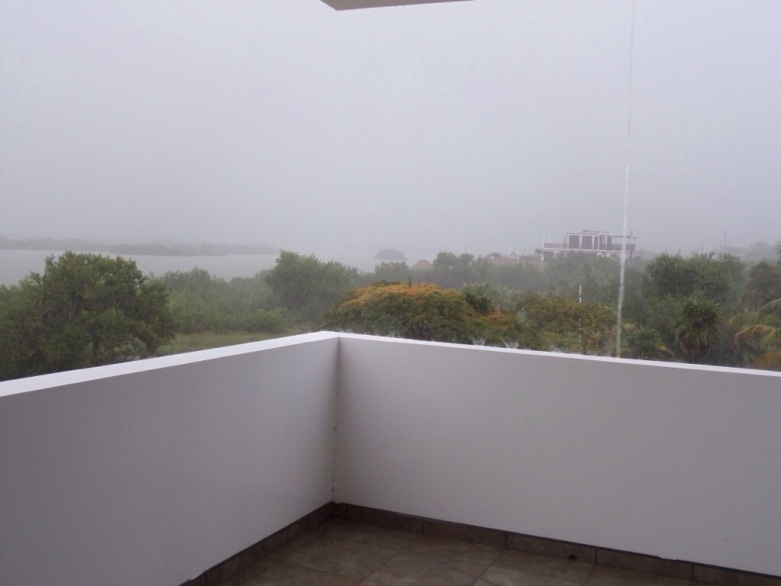 Even though it was absolutely bucketing down (raining heavily for non UK readers) I decided to brave the elements and head to Estel’s for breakfast.

The journey took a little longer though because the road to the bridge was ‘holding’ the rain.

And in front of Reef Village.

I was pleased that when I got to Estel’s it was fairly empty and I got to choose a table, one near the door. And this proved to be a good choice when the rain came down again. 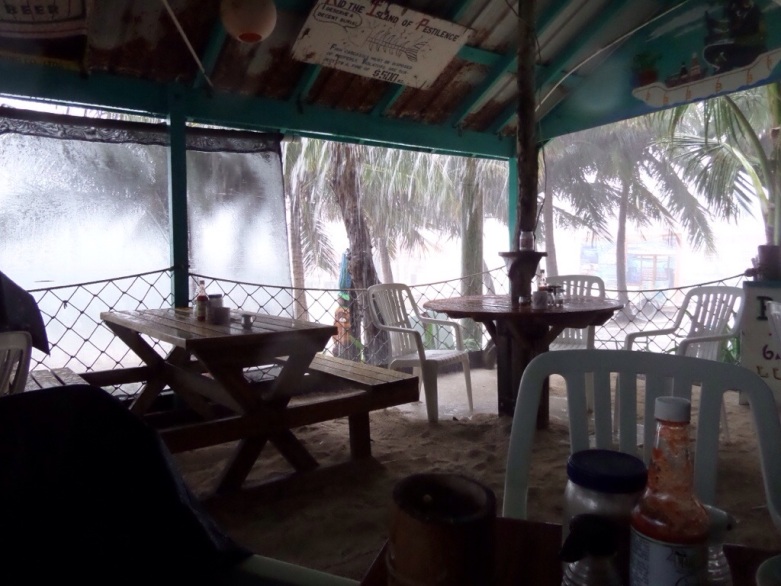 Nearly everyone at the front of the deck and those sitting at tables on the sides moved inside to avoid the heavy rain. Not this guy though, he just opened his umbrella!

I’ll close today’s edition with another of the photos from yesteryear that Melissa and Ken Fellure gave me. This one of the old hand-pulled ferry

which was in operation until 2006 when the Boca del Rio Bridge (subsequently renamed the Sir Barry Bowen Bridge) was built.

Where the hand pulled barge used to operate and where the ‘Bridge stands today.

The headline for today’s edition is based on the single released (as the B-side) in 1979 by Jimmy Buffett. The song (or the A-side) never made the charts but is considered to be one of Buffett’s most popular songs.