Well, at long last, the weather appears to have turned. For the better. Mind you it couldn’t have got worse. I was starting to get concerned that I might run out of sweat tops and jumpers (pullovers for non UK readers) to wear!

My ‘me time’ on the veranda has returned to normal. I know during the chilly (downright cold at times) period I was still ‘hitting’ the veranda between 04.30 to 06.00 hours (timing -fairly obviously – dictated by what time I awoke) with a mug of coffee (black, no sugar) and my iPad. Oh, and a sweater of some type or other. With the change in the weather the additional layer of clothing has become superfluous (Question – how can a word with super in it mean unnecessary? The weirdness of the English language!).

Talking of words and specifically the origin of them, the subject came up yesterday evening when Rose and I had the pleasure of spending some time in conversation with Melissa and Ken Fellure at Carlo and Ernie’s Runway Bar& Grill.

Melissa and Ken both read my blog (obviously they have far too much time on their hands or, no taste. Or both) and Melissa happened to mention my penchant for breakfast at Estel’s and then the conversation moved on to wondering what the origin of the word ‘breakfast’ is. I hazarded a guess when musing that it might mean a break from a fasting period.

Well Melissa (trust you have got this far after my comments above – they were in jest) today I referred to digging to try to find out how the word breakfast came about and, I am pleased to report, I wasn’t far off the mark:

Breakfast – literally refers to the breaking of the fasting period of the prior night.

Now we both know. And anybody else reading this for that matter.

Yesterday morning I didn’t get up until 05.45 hours so didn’t ‘make’ the veranda that early but early enough for some ‘me time’. I knew that I had to start on the fence (there’s a lot of fence to cover) but I didn’t want to start too early so headed in to ‘Town for breakfast at Estel’s (yep, there again) and responding to a comment a few days ago from Wes I did take my camera with me. And, even better, I used it! 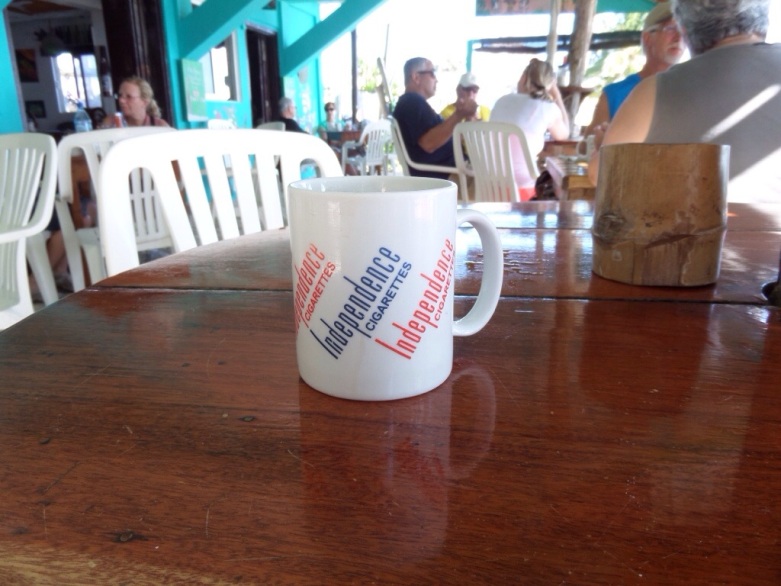 My coffee. What a CUTE mug! No, not me, the receptacle the coffee is in. 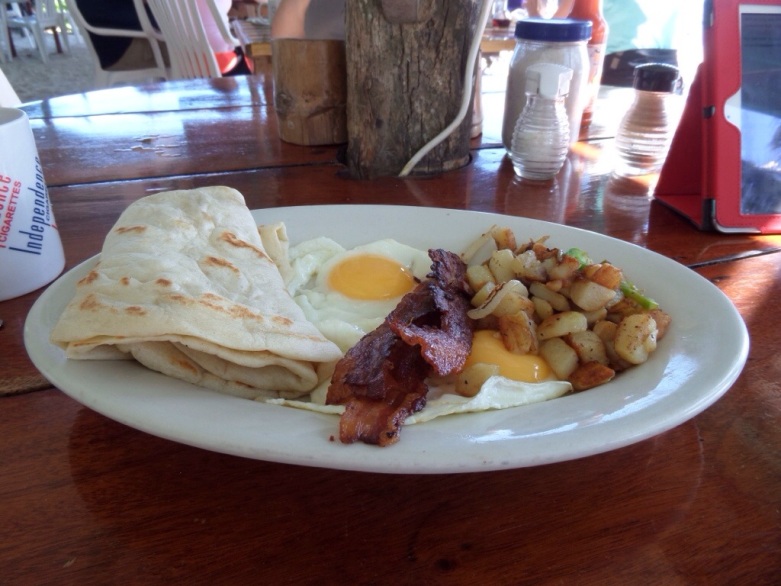 My AWESOME breakfast. It was DELISH.

The view from my table 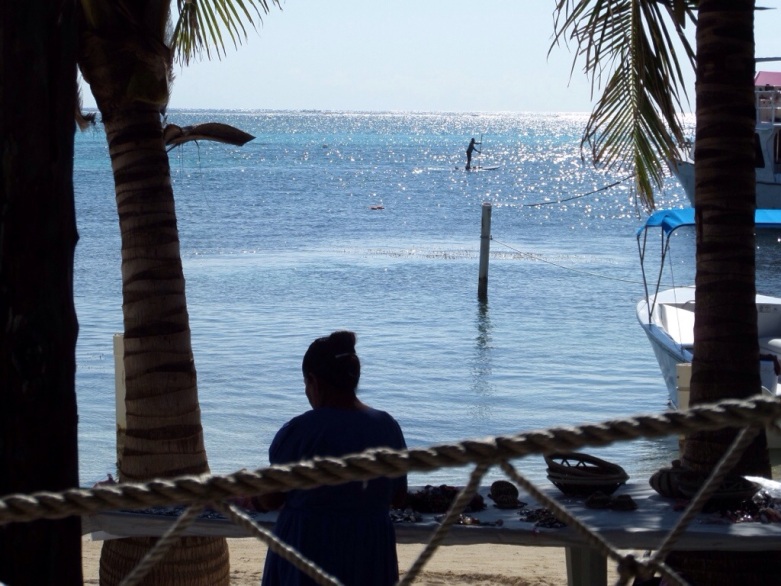 On the way home I parked the cart in Barrier Drive Drive to take a photo or two. Why? Well I had the camera with me and wanted to use another of the photos that Ken and Melissa kindly gave me. 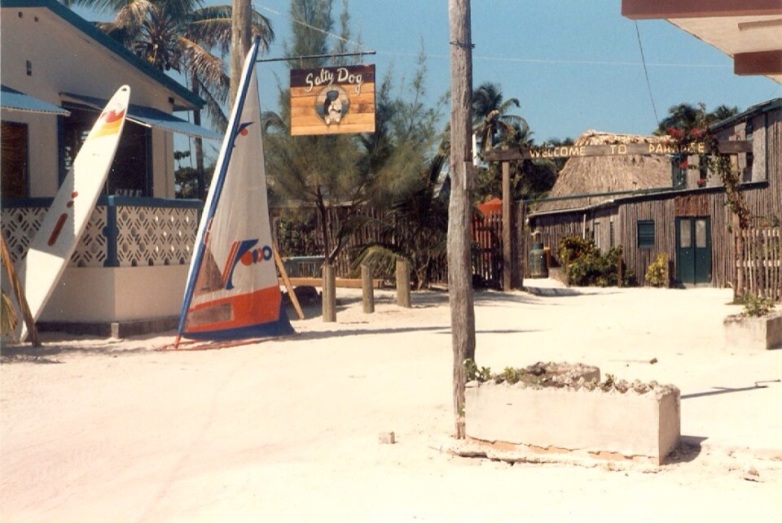 And at its current location 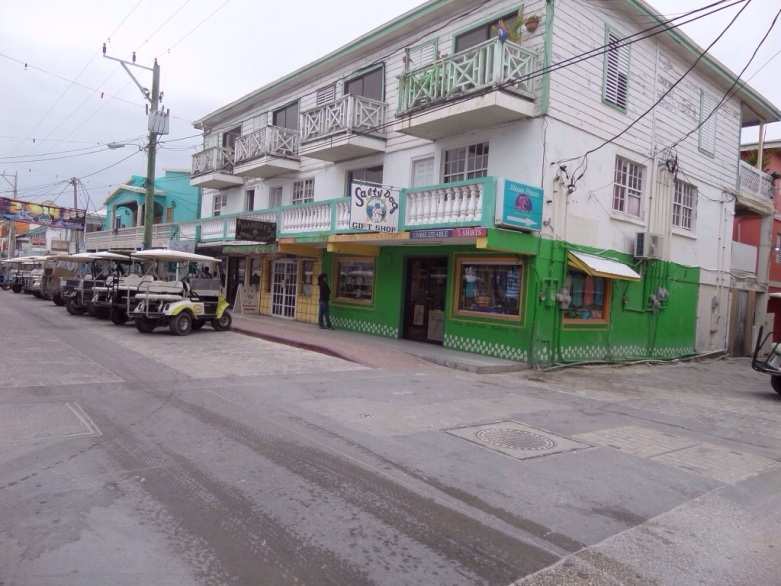 I bought my first ever ‘San Pedro’ ‘T’ shirt with a Salty Dog logo from this store around sixteen years ago and I’ve still got it today. And it still looks good. Little doubt that it’s aged better than I have! But then again, things have changed in San Pedro. 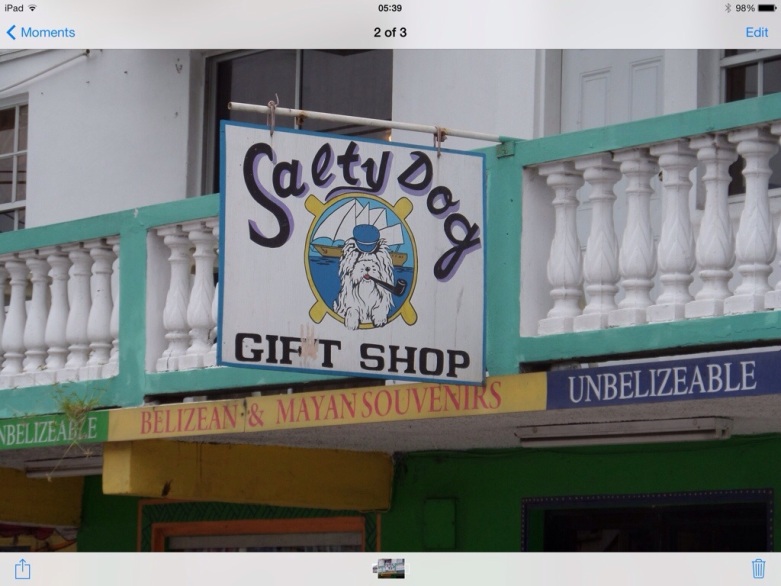 CUTE isn’t it. Oh no, what’s happening to me? I’ve used cute (and in capital letters!) twice in the same edition.

I made one final stop before going home and that was at the SP Hardware store located in Sea Grape Drive. I was going to act upon another suggestion from a reader. This one was from Alan who suggested I get a spray to make covering the fence with wood protector just that little bit easier (and quicker). 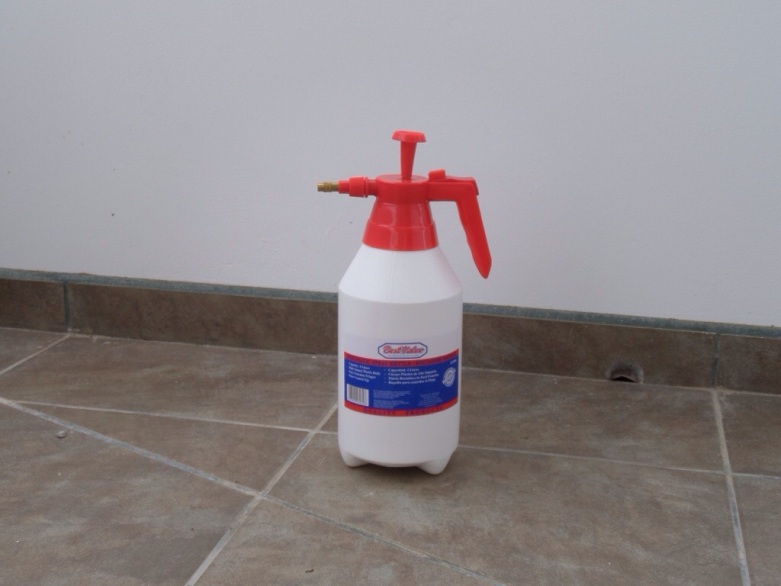 and having bought it rushed home (well not so much rushed given the condition of the road north of the ‘Bridge) to use it.

I did give it a try Alan but it just wasn’t for me. So, even though it will take me longer (a lot longer probably) I reverted to the paintbrush and set about covering the inside of the roadside fence.

“Use the zoom Rose”. 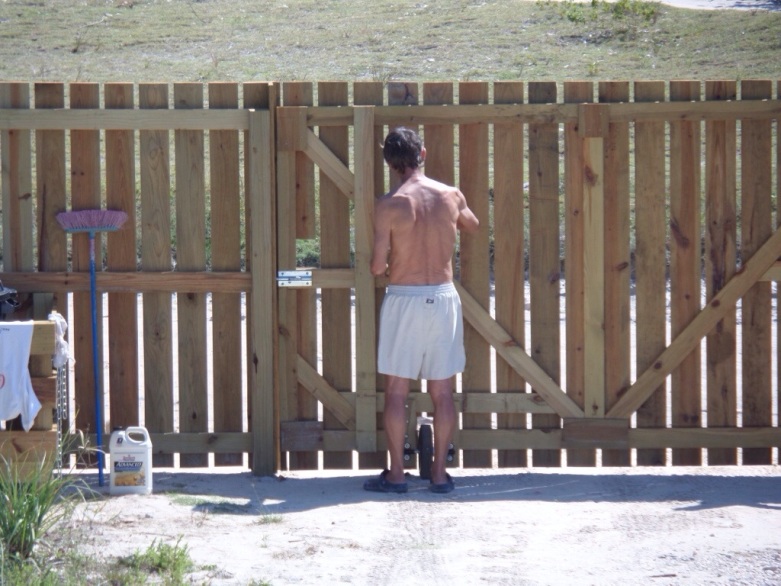 Oh, I meant to mention earlier that on Tuesday evening Nicholas and Rolando came to the house to finish off the remaining jobs (you know, the things we forgot to include as part of the original house build plans).

First off was fitting a pop-up clicker drain for the sink in my bathroom. When we got the sink it only came with a drain and unbelievably no plug. So, since we have been in the house the water has run straight from the tap (faucet for non UK readers) and down the drain. Why would anyone sell (or buy for that matter) a sink without a plug? 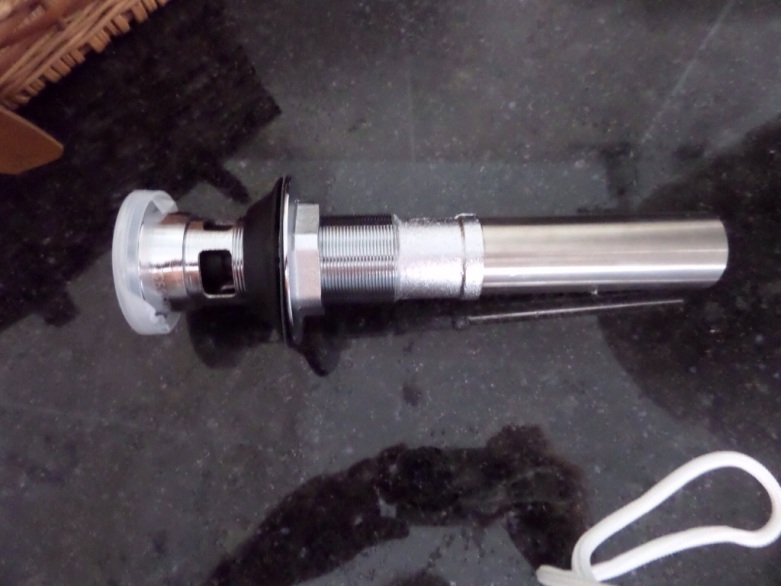 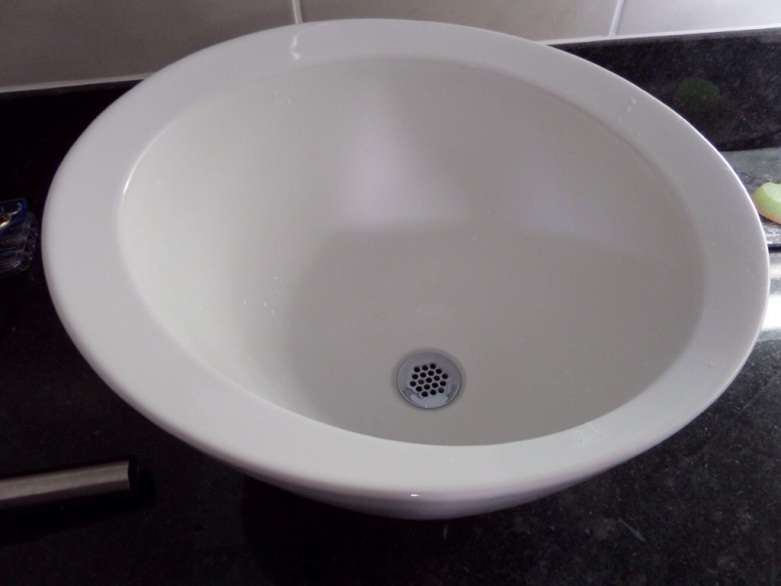 Sink with just a drain. 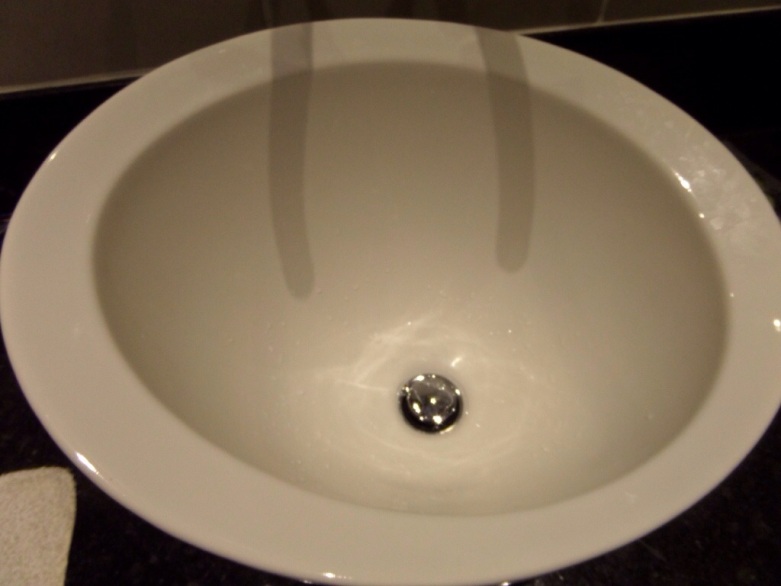 And with the pop-up clicker drain!

And they also installed a cable point (I still can’t believe we overlooked ((nice way of saying ‘forgot’) this)) the living area of the ground floor apartment. 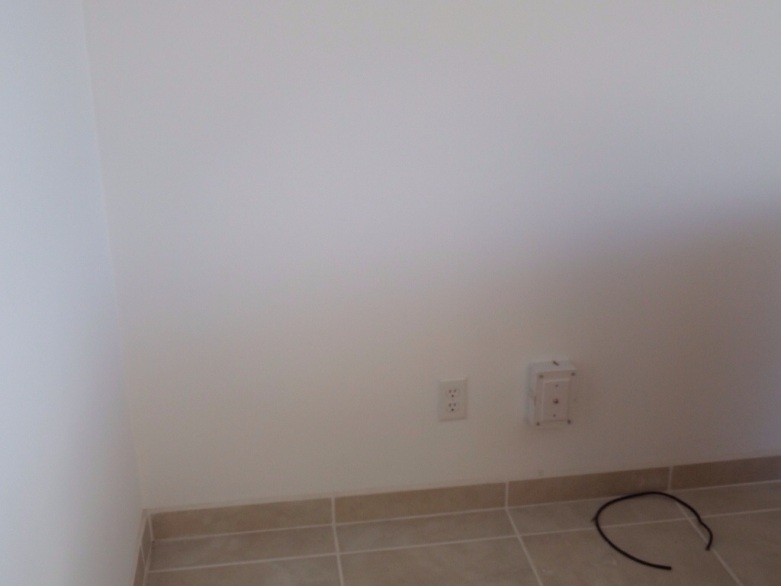 The headline for today’s edition is based on the single released in 2000 by Bob Dylan which reached number fifty-eight in the UK Singles Chart.