Up earlier than lately yesterday shortly after 04.00 hours. I’d woken up around thirty minutes earlier and when I saw the time (I have an alarm clock now -not that I use the alarm feature!) I did try to go back to sleep again but to no avail. I was using more effort to try to resume sleep than the benefit I would have got had I achieved it! Only one thing to do. Get up.

So by 04.15 hours I was comfortably seated on the first floor western veranda with a mug of black coffee and my iPad. I read The Times online for a while -mainly concentrating on the football section (The Game) to read the match reports for the Premiership games that took place over the weekend and the pre-match reviews for Arsenal’s game against Aston Villa later in the day.

I then switched to the Ambergris Caye.com Forum where I found a thread entitled “Police Report“. Why am I mentioning this a few of you are probably thinking. “We know he rambles but he has gone way off the track this time”.

I’m mentioning it because one of the reports was about a guy with my name -well not my name but my pseudonym – who was apprehended and charged for being in possession of controlled drugs. So? You’re thinking. Well I know that a good few of you also visit Ambergris Caye. Com and I just wanted you to know that it wasn’t me.

Now where was I? Oh yeh, on the veranda.

Being up so early I thought I’d make a start on yesterday’s edition so I uploaded the photos I been taking since last Thursday and then spent some time reviewing them in the hope that inspiration might find me (those of you that read yesterday’s edition will know that it didn’t). The time by now was around 06.00 hours so I decided that I needed help – breakfast at Estel’s so I showered, shaved, brushed my teeth and dressed and set off shortly after 07.00 hours after I had let Moses and Pablo in who had come to fit the wheel for the gate (thanks Wes). More about the wheel later.

Breakfast was -as always- good (message to self – remember to take a photograph before I start to devour it ) and in a contented frame of mind I knocked out the edition. Which is what I am now going to do with this one.

Before the heavy rain struck last Thursday Rubio and Mike had constructed the gate for the fence (roadside only) for our adjacent lot and had also put a couple of posts in. We expected work to resume the next day but Ofel Flota , the building contractor we appointed to build the fences, contacted us to let us know that Rubio -fed up with the rain- had headed off to Orange Walk and because of this Moses and Pablo would complete the task starting on Saturday. And that’s exactly what happened.

Pablo digging a hole for a post for the short bit of fencing for the southern side.

And then it was time to hang the gate.

“Are we nearly there yet?”. 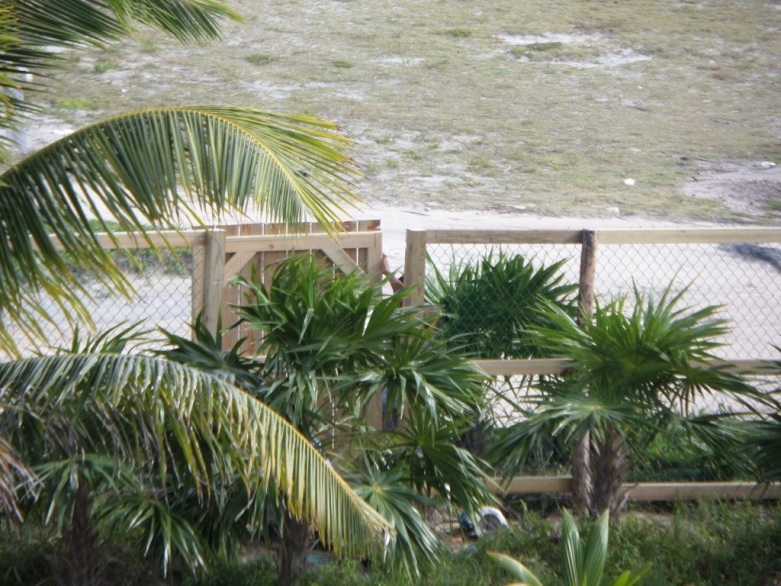 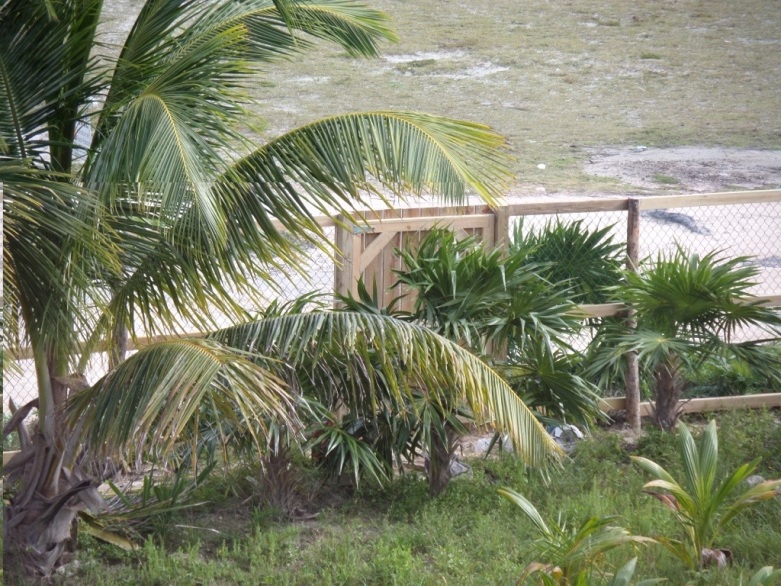 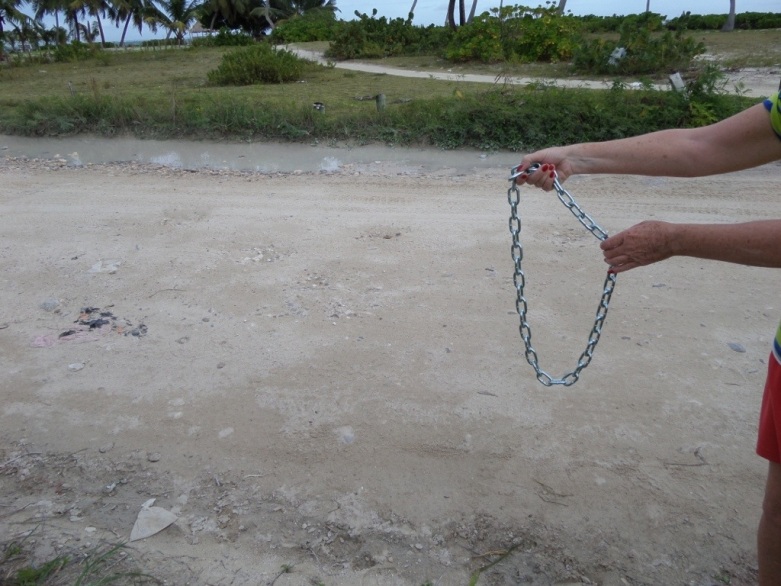 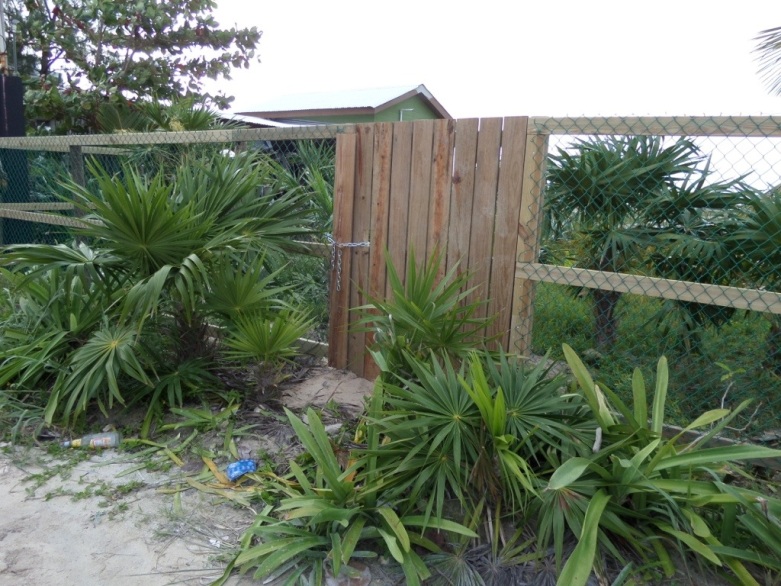 Yesterday they returned to fit the wheel for the main gate. The gate is heavy (six feet high by ten feet wide) so needs supporting. And to make the gate easier to open and close.

Ofel turned up to give guidance as to where the wheel needed to go. 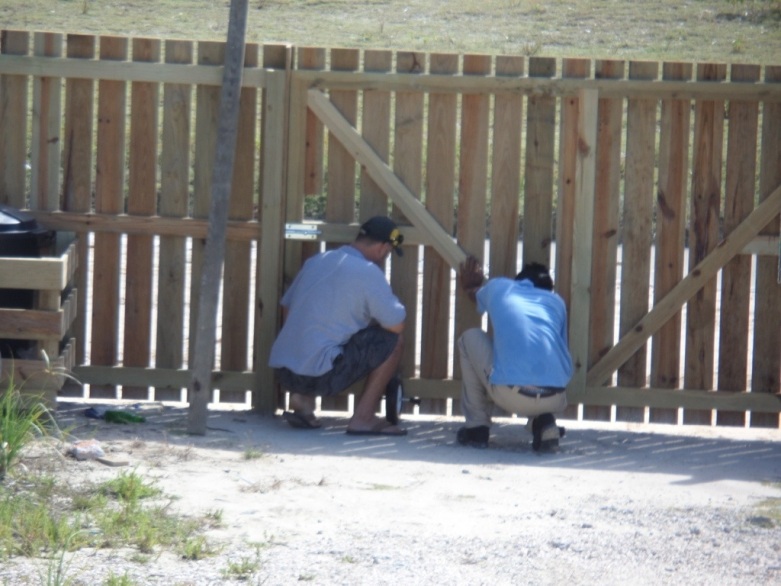 Around this time I left for breakfast (its so long ago that I mentioned this I bet you forgot. I nearly did!) but by the time I had returned it was fitted. 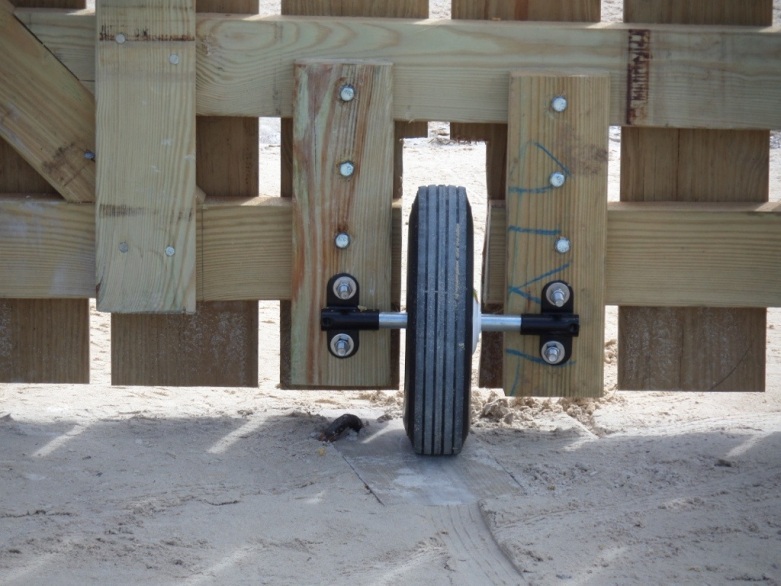 Close up and personal!

They finished just in time to watch the helicopter that was flying overhead. So close that at one stage we thought that it was going to land in the back garden. Was it a drug bust and they thought that I am THE John Henry!

No relevance at all for the next photo. I just like it. 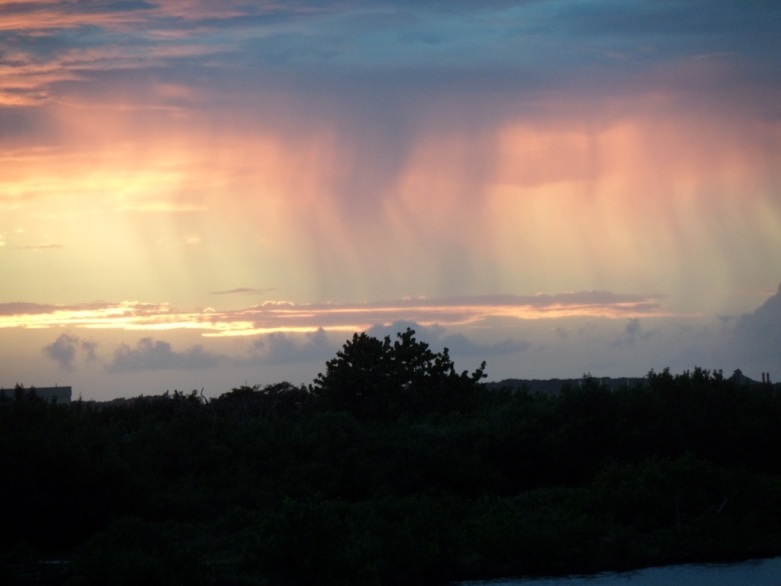 Stay “tuned” for the next exciting (sic) update. Can’t wait, can you !

Oh and for those of you that are interested the change of ownership (you read it here first) of Caribbean Villas Hotel takes place tomorrow.

The headline for today’s edition is based on the single released in 2001 by Shaggy which reached number one in both the US Billboard Hot 100 and the UK Singles Chart.