In yesterday’s edition I promised(sounds very magnanimous of me doesn’t it) that I would bring you all (anyone would think that I have an audience of thousands ) up-to-date with what’s been going on for Rose and I. So, without further ado I will start to do just that.

On Tuesday morning I caught the Belize Water Taxi 07.30 service to Belize City and on arrival at around 09.00 hours caught a taxi and went straight to the offices of Caribbean Shipping Service (this company acts as agent for Hyde Shipping, the company we used to bring our purchases over from Miami) to pay the invoice so that our container would be released.

As an aside I must mention (well I don’t have to really but it might be of interest to some of you) that if you are in Belize for any length of time and think that you might be using the Belize Water Taxi service quite a bit it could be worth your while joining the Rewards Program. It will cost you BZ$ 10 to join but thereafter you get discounts off the normal prices. For example a return ticket from San Pedro to Belize City normally costs BZ$ 50 but as a member of the Rewards Program it costs BZ$ 48. OK so it’s only a BZ$ 2 saving but … it adds up over time. So am I a member? Keep meaning to fill in the form but haven’t quite got around to it yet.

Anyway,sorry for that little diversion, let’s get back to the purpose of my visit to Belize City on Tuesday – the inspection, clearance AND release (sounds like it was imprisoned doesn’t it) of our container.

After paying the invoice I headed (I’d kept the taxi waiting for me) straight to the Port of Belize to meet with Milyn Gomez our Customs Broker and a day of excitement, not!

I wish that I could spice or glam up the process that followed but I can’t. My literary and creative skills are not that good. A descendant of Wilhelm or Jacob Grimm I’m not. Suffice it to ‘say’ that it was a painfully, numbingly boring process.

I just stood around whilst various people headed off to different offices with my paperwork and every so often I was told that my container would be taken to the Queen’s Bonded Warehouse soon. Live in Belize for a while though and you get to realise that ‘soon’ has a different meaning to what you are used to it meaning.

The lunch break came and went and I continued to just stand around waiting. I felt like I had waited so long that I might be waiting in vain but then Samuels aka “Buck” returned to find me – just waiting- and gave me the great news. Yes, our container was on the move.

“Buck” and I walked to the Queen’s Bonded Warehouse and got there just before the container arrived. 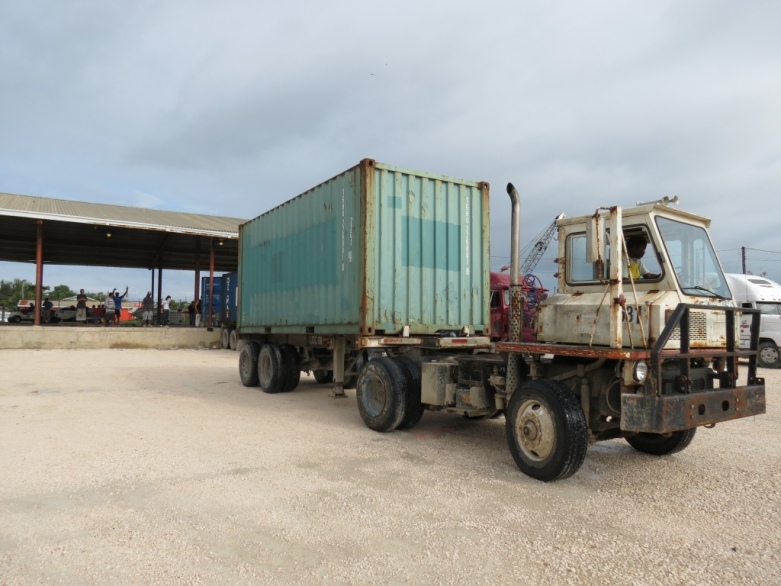 Backing up to the dock/inspection area. 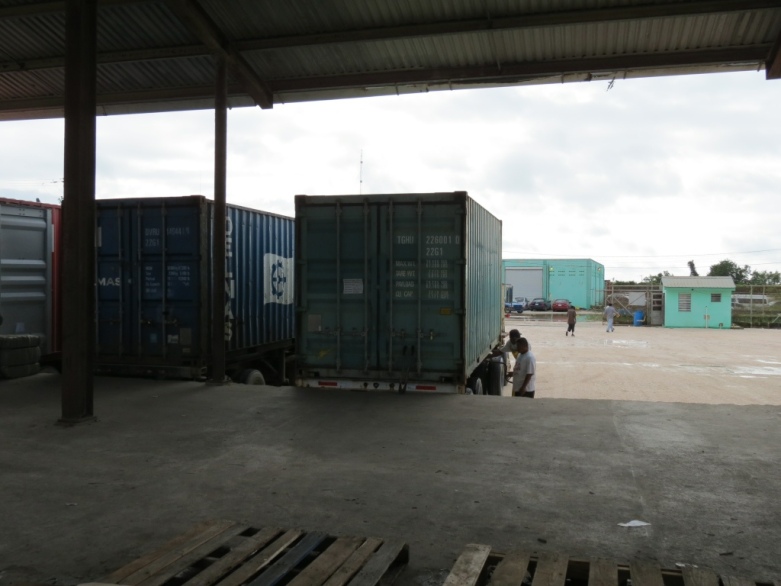 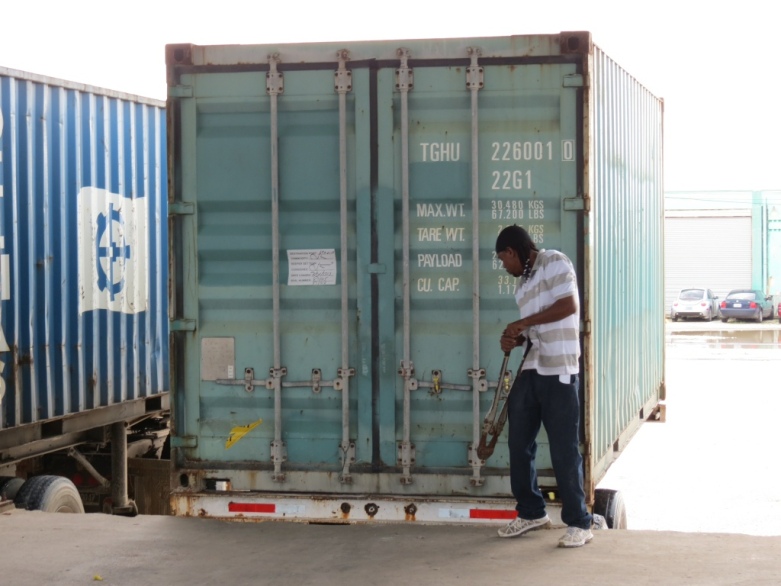 “Buck” and two other guys (I paid each of them BZ$ 50) then unloaded a sufficient number of packages to create a pathway for the Customs and Excise Department officials to inspect our consignment. 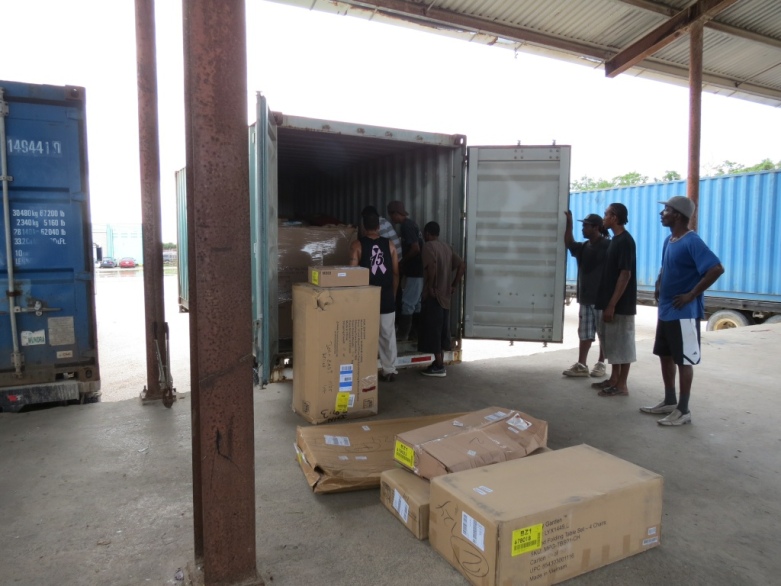 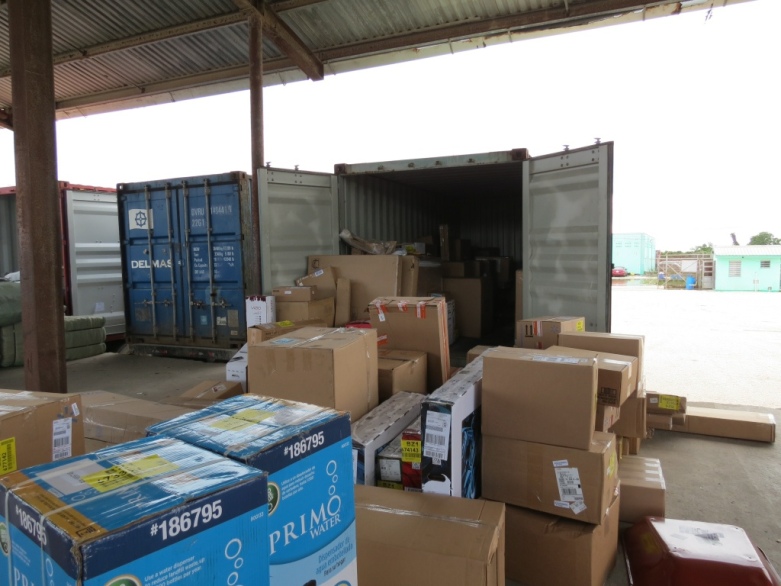 With the inspection over it was to close the container doors 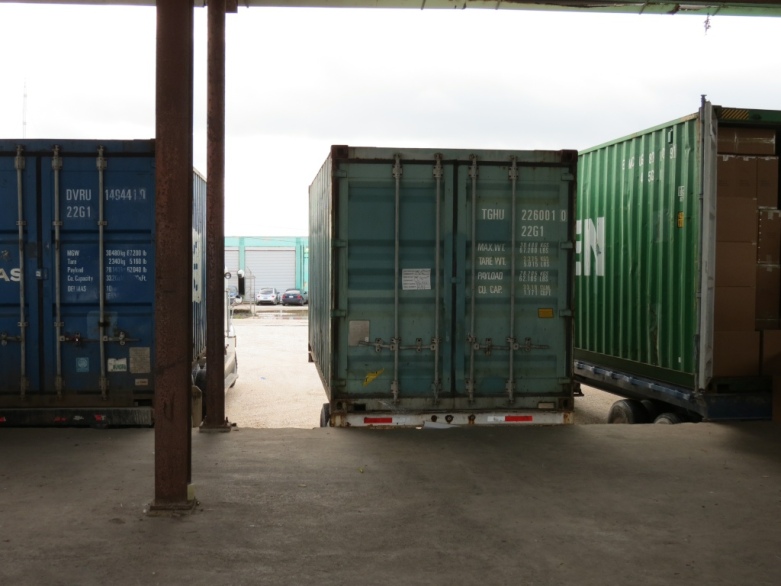 and for me to lock it with the padlock I’d taken with me. 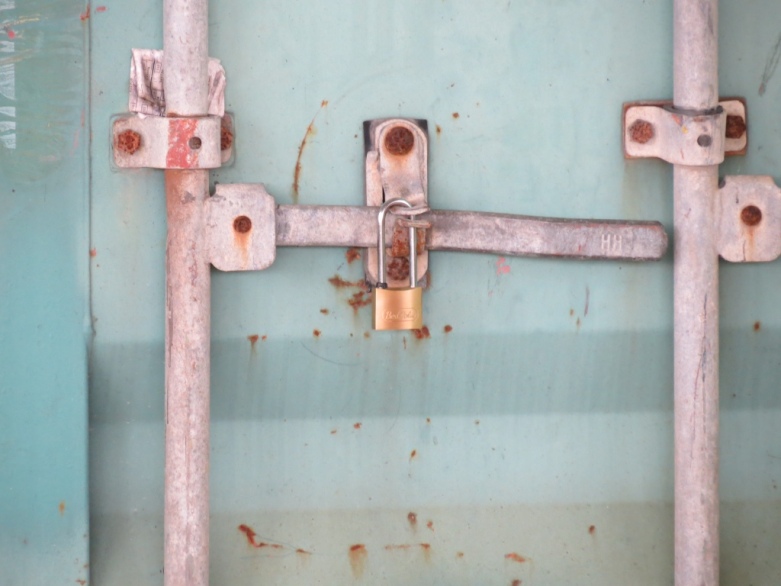 With the container locked I jumped in the cab of the lorry (truck for non-UK readers) to make the short journey down the road to the Caribbean Queen barge. 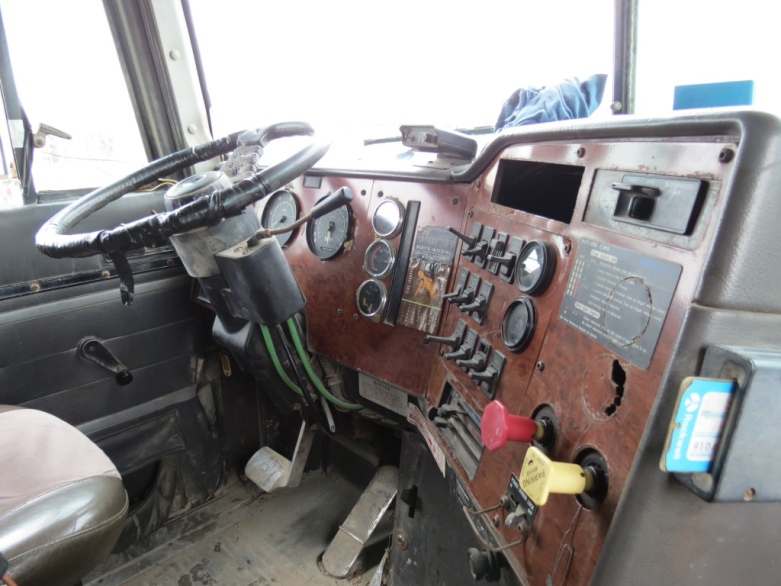 The antiquated (and well worn) dashboard of the cab.

Within minutes the driver was reversing on to the barge 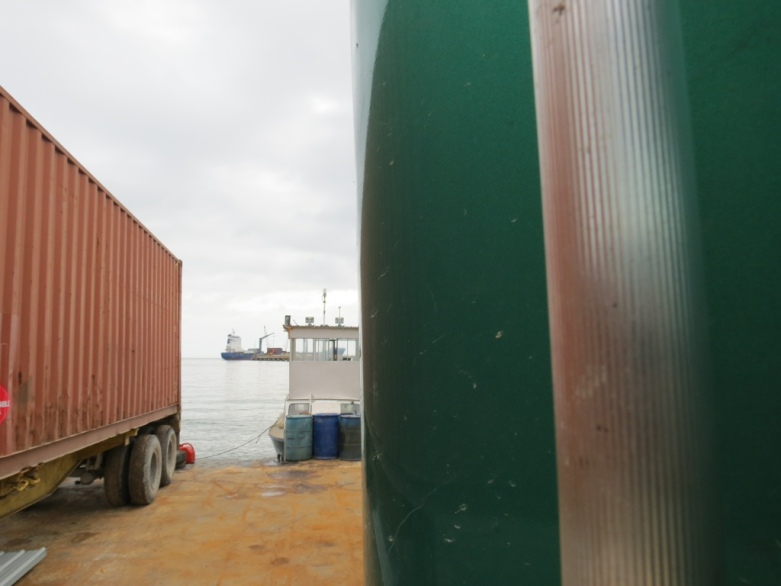 and unhitching the trailer with our container. 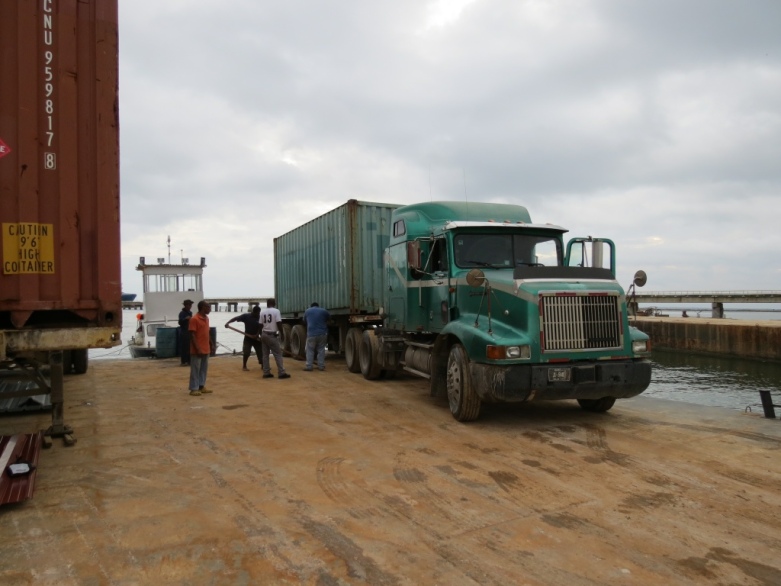 Beside us another barge was being loaded with building materials and fruit/vegetables. 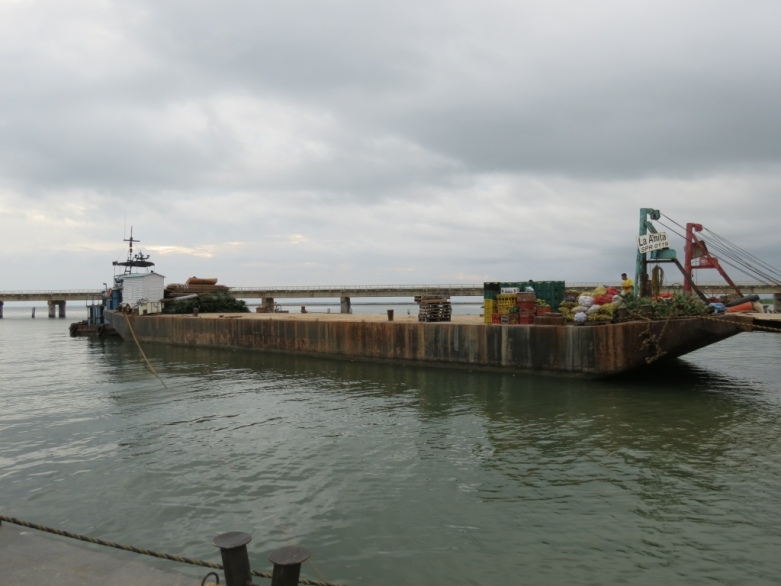 Ready to be loaded next were fourteen new golf carts for what to me seems like Carts Belize,one of the golf cart hire companies on Ambergris Caye. 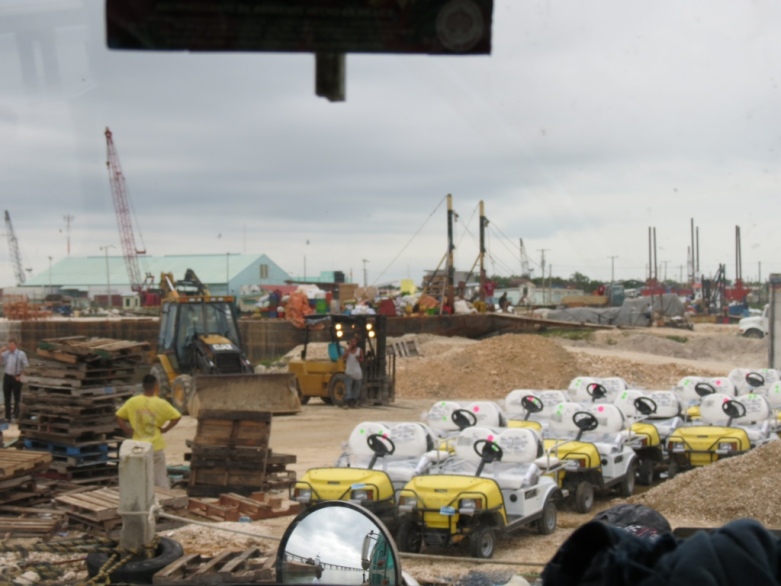 Just in time for the busy Christmas and New Year period.

I don’t know if this is an exclusive or not but the driver told me that last week he loaded a forty foot container on the barge to Ambergris Caye for Steven Seagal. Not seen him on the island yet but …

By now it was close to 16.30 hours and time for me to head home but after hanging around all day I just couldn’t face the thought of a crowded water taxi back to Ambergris Caye so I took a taxi to the Municipal Airport and caught the last flight Tropic Air flight of the day.

The next morning (Wednesday for those of you that are interested in this type of detail) at around 11.00 hours the container arrived at our house where we were anxiously waiting for it. 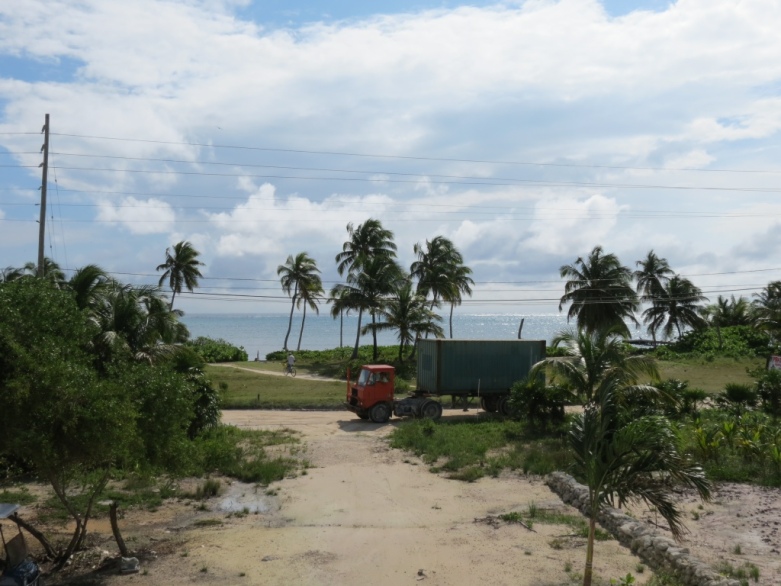 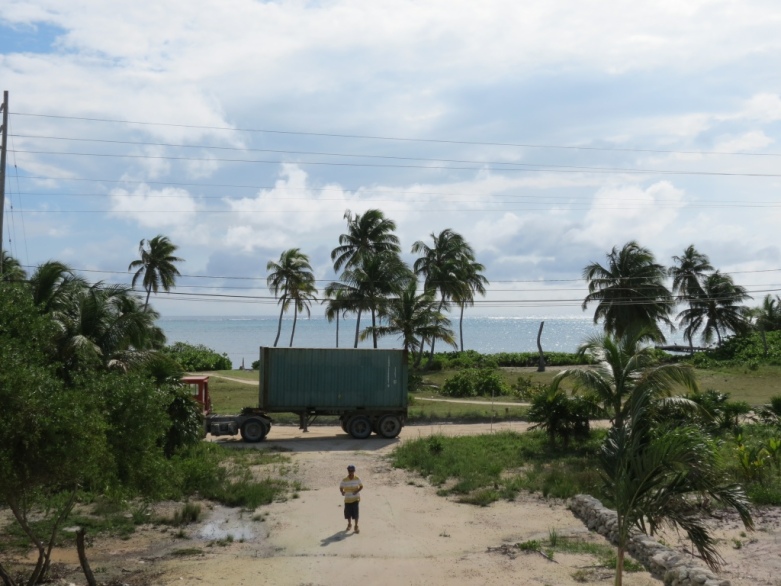 Driver testing that our driveway (I use this description very loosely) was firm enough to take the lorry(truck) and trailer. 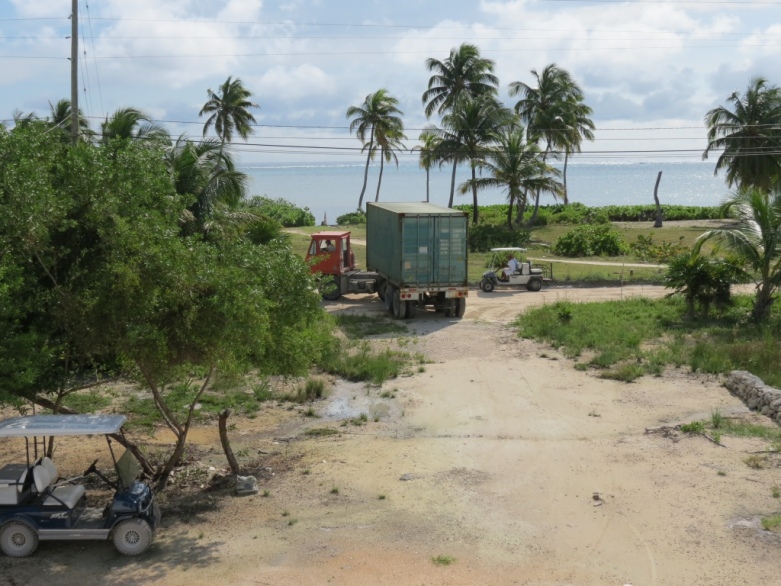 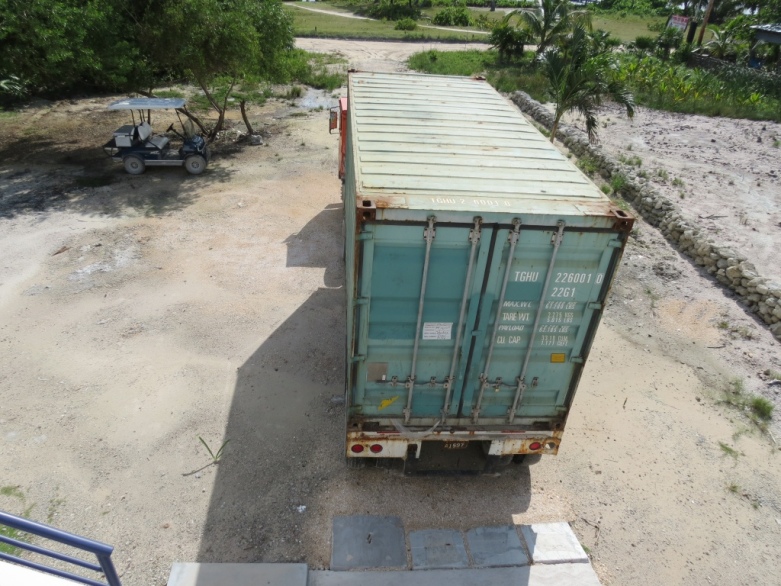 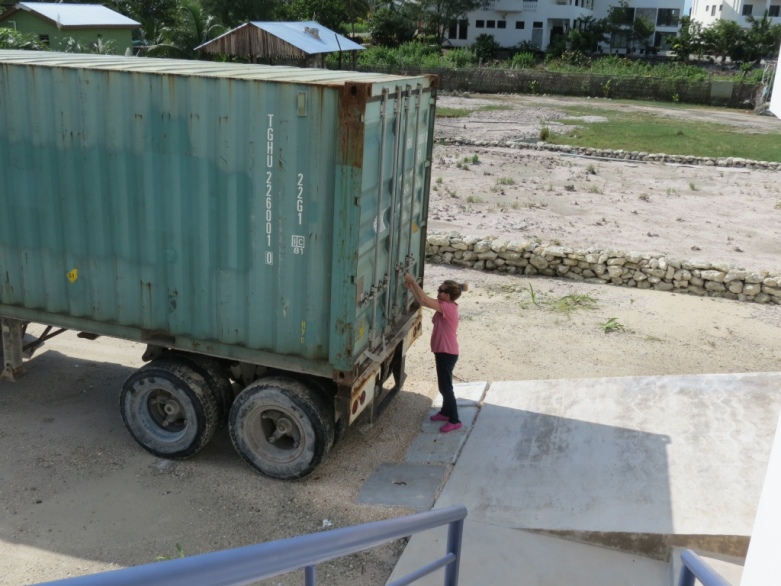 We had organised it for Lloyd and two of his guys to be there to unload the container and take the packages to the areas of the house that we wanted them in and within two hours the container was empty and it was time for Rose and I to start opening the parcels.

The headline for today’s edition is based on the single released in 1977 by Bob Marley and the Wailers which reached number twenty-seven in the UK Singles Chart.