Not a great deal to ‘report’ on about yesterday. Goes without saying (so why am I saying you are probably thinking) that I got up (early – think it was around 04.45 hours. Must get batteries for that clock and fix it on the wall!), made the mug of black coffee, unplugged the iPad, grabbed the chair (how do I manage so many things at virtually the same time?) and ‘hit’ the veranda.

Spent some time looking at the lists (and I mean LISTS given the number of times we have attempted to place orders with Walmart) of stuff we are going to ship from Miami for our build in Ambergris Caye, Belize to make certain that we hadn’t overlooked (a kind way of saying forgotten) anything. And we had! What about the folding chairs for when we want to fish from the sea wall at the end of the garden? Oh, and the wrench and ratchet set so that I can easily remove (and replace) the cargo box on the golf cart. And the projecting alarm clock (don’t need it to wake me up but it would be good to know when I wake up if it is tomorrow or yesterday, if you understand what I mean. No? Well have a few mugs of black coffee and you might!).

And then there is the Sunbrella fabric for the cushions that Rose is going to make for the concrete seating area we have on the top floor terrace.

The concrete table and seats. It will be so much better with comfortable (and weather proofed) cushions.

Rose has the curtains to make first (and we have a lot of glass in our house) but I know that when she gets going she’ll fairly whizz through this and in no time at all she will be on the cushion covers (oh, she has to make the cushions first though).

I don’t think (I know that I should know but…) that Rose has ever had professional training but she has a natural (born with it I suppose) aptitude for crafty (not wily, deceitful or sly but artistic) type of things. And with a room of her own (THE handicraft room) there’ll be no stopping her.

With the ordering out of the way I decided that I needed breakfast so I showered, etc and headed off to Estel’s (got to be done a couple of times a week or I feel that I am being disadvantaged).

When I got back to the house one of Lloyd’s ‘boys’ was hard at work with the final bit of land filling for our adjacent lot.

Next job the small rock wall down the southern and western sides of the lot.

Whilst out on the veranda I noticed the reflections of the clouds in the lagoon.

The rest of the day was taken up with cleaning the windows (in and out) and I used nearly a bottle of Windex doing it. And I haven’t ‘hit’ the ground floor apartment yet!

In the early evening we decided to drive to ‘Town for a Belikin but before doing so I took another look out over the lagoon. The water was the same but the change in lighting conditions makes it look so different. 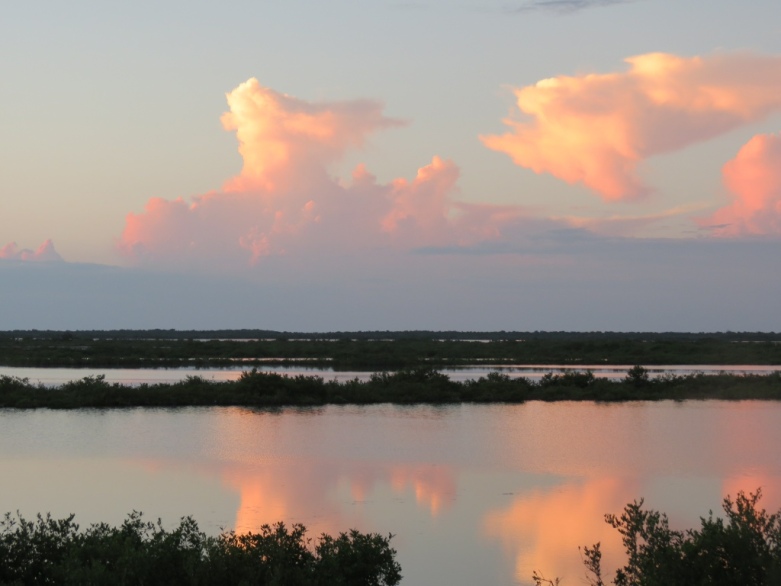 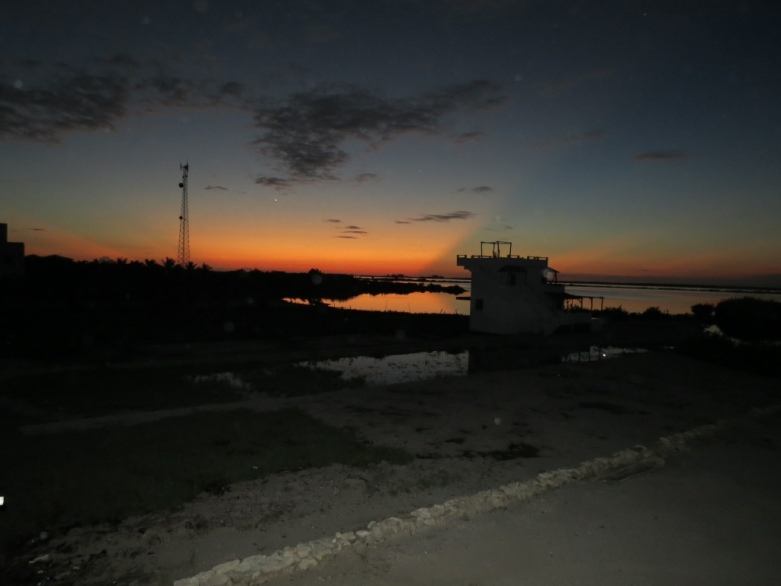 and then took the twenty minute drive (it takes so much longer with the road in the condition it is) to Carlo & Ernie’s Runway Bar & Grill.

We hadn’t even managed to sit down before I was told by some of the regulars there -Americans – that I scooped the weekly NFL pool. I’d predicted eleven -yes, eleven – of the match results (winner, not score) correctly. I could sense there was amazement, bewilderment even that this Brit could do this. It’s an American game after all. I felt like an Englishman in New York!

I felt proud. OK, so I’d chosen the teams by whether I liked their names or not but I won and claimed the BZ$ 150 prize!