The completion of our build in Ambergris Caye, Belize has given Rose and I nearly every thing we have been dreaming about for the last few years. I say nearly because although the construction of it is finished it is still somewhat of a shell.

OK, we have a sofa and armchairs. The kitchen is equipped with the essential appliances. But we don’t yet have the niceties. No TV. No dining room table and chairs. No bed (we have an air bed but its not the same – but I do know now what they mean about rolling out of bed!). No patio furniture. The list goes on.

We know what we want (we have spent time during the last few months considering options and making choices) and during this last week we have tried, on-line, to make the purchases in the ‘States for the stuff that we want to ship (under the Qualified Retirement Programme scheme) to Belize.

The ordering process went exactly as you would expect. You choose what you want and then place it in ‘your basket’. Repeat this action until you have selected everything you want and then go to ‘checkout’. And that is when the trouble begins. I can’t go any further. It won’t let me pay! Why? I am using a Debit card so no risk of not having the money in my account . No waiting for payment.

Interminable, inane email exchanges with the stores we want to purchase from bring no solution. Is it the fact that I do not have a US billing address? No US telephone number? We want the stuff delivered to a shipping agent? Questions that I have yet to get answers to. But I will next week -one way or another- because I am determined that we will get those creature comforts for our new home.

The absence of a TV in our home means that we have to travel to be able to watch Arsenal’s games and this was the case yesterday morning when Rose and I went to Pedro’s Hotel to watch the game against Liverpool. Top placed (Arsenal) versus the third placed club. It’s still early in the season but if Arsenal are to be considered a serious proposition to win the ‘League this season they have to win games like these.

We got there just before the 11.30 hours (local time) kick-off. Just in good enough time for me to have a BZ$ 25 bet with Peter Lawrence (Pedro -oh he of little faith) that Arsenal would win. And they did, two goals to nil.

After the game (and BZ$ 25 richer) Rose and I headed home taking with us Frank (our friend who is a serving member of BATSUB), who was visiting Ambergris Caye for the weekend, with us. It had been two months since he had last seen our build in Ambergris Caye, Belize and he was keen to see the finished article. And we were more than happy to oblige!

Following lunch (we had picked up the ‘obligatory chicken, rice and beans ((Brianna’s had sold out of the chicken soup -bummer)) we gave Frank a tour of the house and the Ground Floor apartment and then around 15.45 hours I took him back to Pedro’s Hotel because we had a party to organise. We had invited the core team who had worked on our build in Ambergris Caye, Belize to join us for a celebratory drink.

We had thought that they would arrive shortly after 16.00 hours (not long after they finished work) but 17.00 hours came and went. No one arrived. It was getting dark .

And then just around 17.45 hours we saw the first bikes appearing at the end of the front garden and in no time at all they were lined up in front of the house.

In double quick time the Belikins (I had bought three crates) were out of the refrigerator and we started to reminisce about the build.

From left to right, Nicholas, Sam, Eduardo and Hipolitto.

Time for Nicholas, on the eve of his twentieth birthday, to strike a pose.

It was time for a group shot.

And then one with Rose and I in the shot.

Rafael (aka The Frog arrived) – he’d obviously taken far too much time on his appearance! 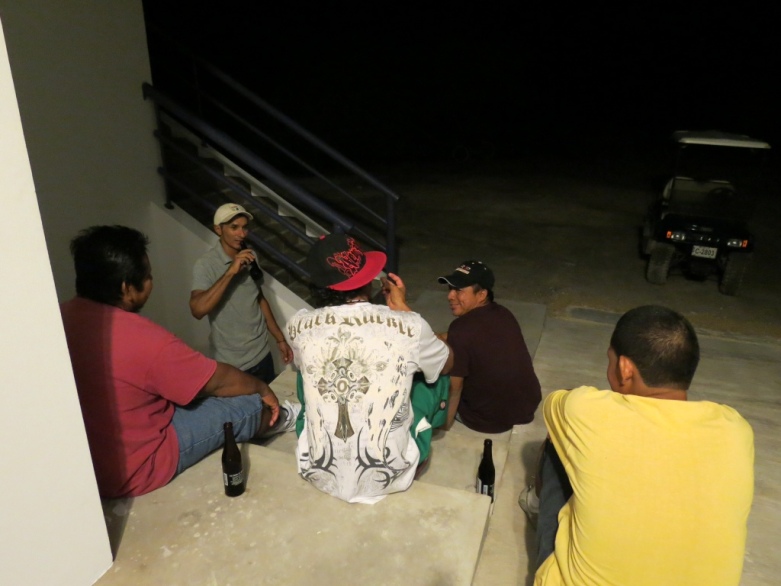 Some of the guys ‘chewing the fat’ and guzzling the Belikins.

Time for another pose.

And then spend some time looking at the hundreds of photos I had taken of the guys ‘in action’.

All the while the caps were coming off the Belikins and we were slowly (well not that slowly actually) working our way through the three crates.

Rose then got in on the act!

Rose flanked by the two brothers, Nicholas and Angel.

Time for me to get in on the act.

I’m the old one. Rose is the pretty one!

Around 20.45 hours the last of the Belikins was opened and although there were shouts from the boys of don’t stop the party it was time to say goodbye. A great bunch of young men who have helped to make our dream come true. Thank you guys.

The headline for today’s edition is based on the single released in 2012 by Pitbull which reached number seventeen in the US Billboard Hot 100 and number seven in the UK Singles Chart.