Up before 05.00 yesterday for what I knew was going to be a very busy day. Not so busy though that I couldn’t spend some time on the veranda. I had to drink my coffee somewhere and obviously I had yesterday’s edition of the blog to produce.

Not enough time though to let things distract me. No stopping to ‘people watch’ the locals and tourists out on the beach for their early morning exercise. No gazing out at the ‘Sea watching the fisherman trawling for bait. Or the dive boats loading up with tanks of air. No, this was a day for action.

With the blog completed and published I made and ate breakfast and then Rose and I focused on assembling and packing the remainder of the stuff for our move. We had already decided that although we had arranged for Tony ‘Brown’ to move our stuff for us we would move anything of a fragile/easily breakable nature ourselves.

In between packing I did switch the TV on just before 08.00 hours in the hope that Arsenal’s game against Norwich City would be on. But no. NBC in its wisdom (!!!) had elected to broadcast Manchester United’s game against Southampton. Ludicrous. Who wants to watch Manchester United stutter and stumble again. The good news is that -even without the ‘support’ of NBC – Arsenal won by four goals to one and remain at the top of the Premier League.

Anyway, back to the packing and our move.

After showering, shaving (me that is and not Rose) and dressing we loaded the golf cart and headed up to our build in Ambergris Caye, Belize and got there around 10.45 hours and on our arrival we found Angel hard at work cleaning the floors of the Ground Floor self-contained apartment (our temporary home until the remaining work on the First and Second Floors is completed).

Our first job was to wash the insides of the kitchen cupboards and drawers (the guys had already done this but …) and then the same for the refrigerator, oven (range for non UK readers) and microwave. With this done we carried in, emptied and stored the contents of the boxes we had brought with us.

With that completed we then headed off to Victor’s (the welder) workshop to look at the door for the well and hatches for the septic and water tanks that he and his son Michael are making for us. They are all ‘coming along’ nicely and the door for the well should be ready for fitting on Tuesday.

Back to the condo we have been renting during our build in Ambergris Caye, Belize for more packing until Tony arrived at 13.00 hours with his two loaders. Two young girls! He must have seen the concern (or was it doubt) on our faces because he very quickly assured us that they were very strong and ‘up’ for the job. And they were. Any doubts I had were dispelled as soon as I saw the smaller of the girls grab a suitcase and fairly fly down the stairs to the waiting trailer. Just goes to show the strength of some girls!

They cleared the suitcases, bags and boxes in double quick time and by shortly after 14.00 hours everything had been unloaded (the girls did get the help of the guys at our house – chivalry isn’t dead) and stored in the house.

Trailer emptied and the loaders (not a bead of sweat to be seen) pose for a photo. 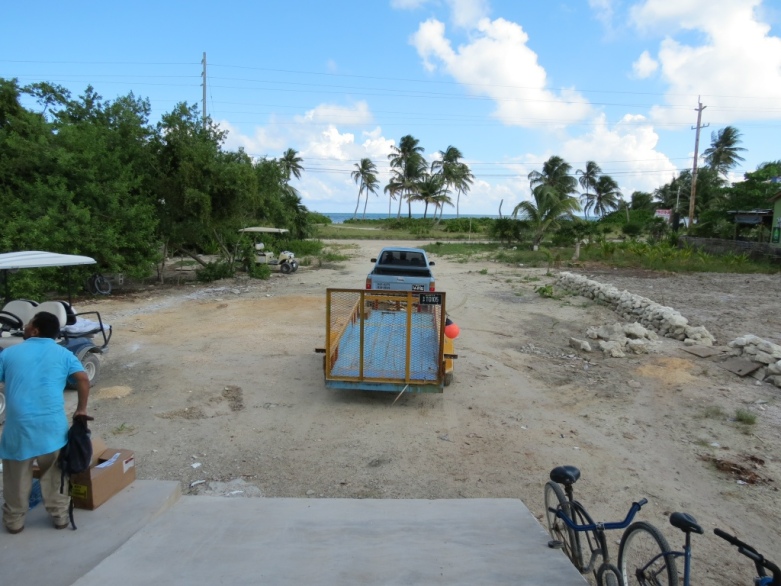 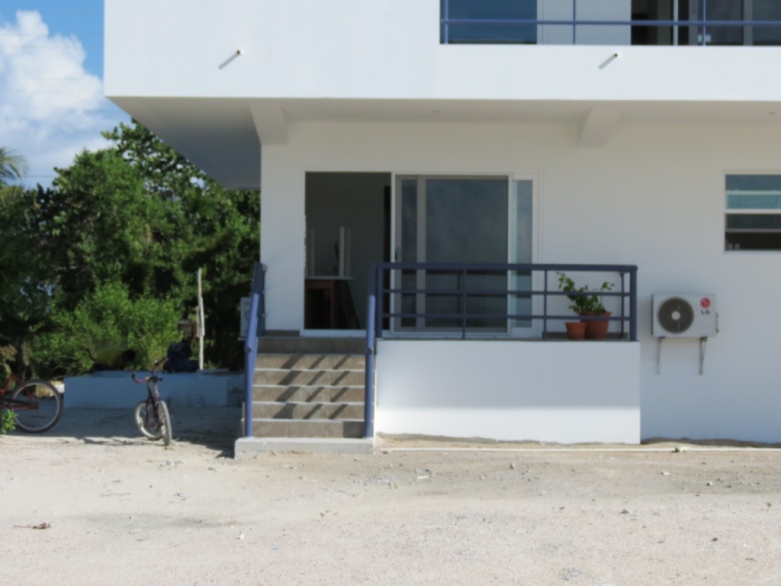 I took a break to see how the landfill for our adjacent lot was progressing.

On the northern side of the house work was continuing on the soak-away. 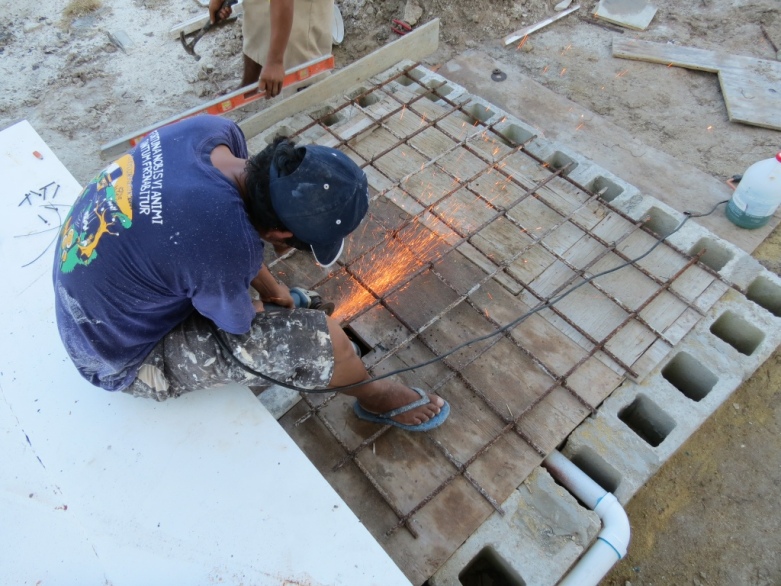 Alfredo finishing off the rebar (had to get this in for all of you that found rebar so fascinating!) in readiness for the concrete pour.

Just as we were leaving Rafael (aka The Frog) arrived with the shingle for the pour.

Racing (well you can’t really call it racing when you are in a golf cart but …) back to the condo we loaded some more stuff and then made a return visit to the house and by the time we returned we saw what the guys had accomplished during our absence.

Mirror fitted in the en-suite for the larger of the apartment’s two bedrooms.

And in the other en-suite too.

Remaining shelving installed in the Utility Room (my room)

And the first of the Millennium Ultimate door locks had been fitted by Moses. 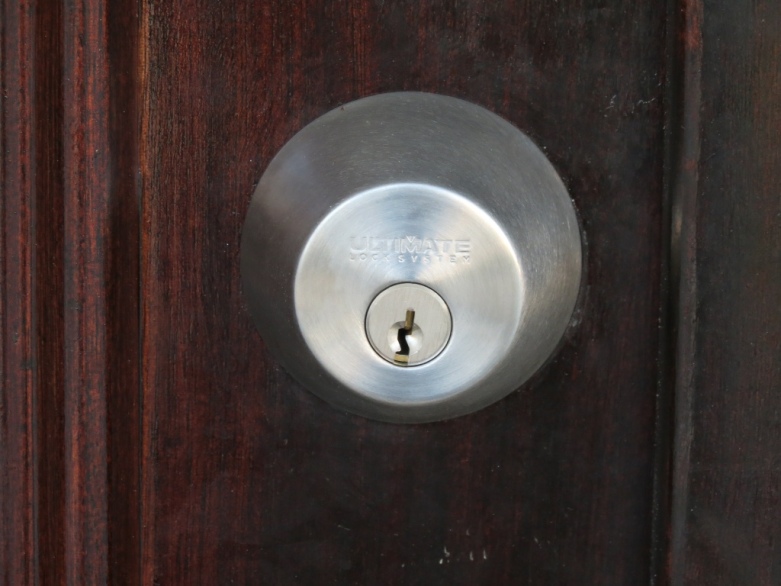 Outside the house the pour for the soak-away had been completed. 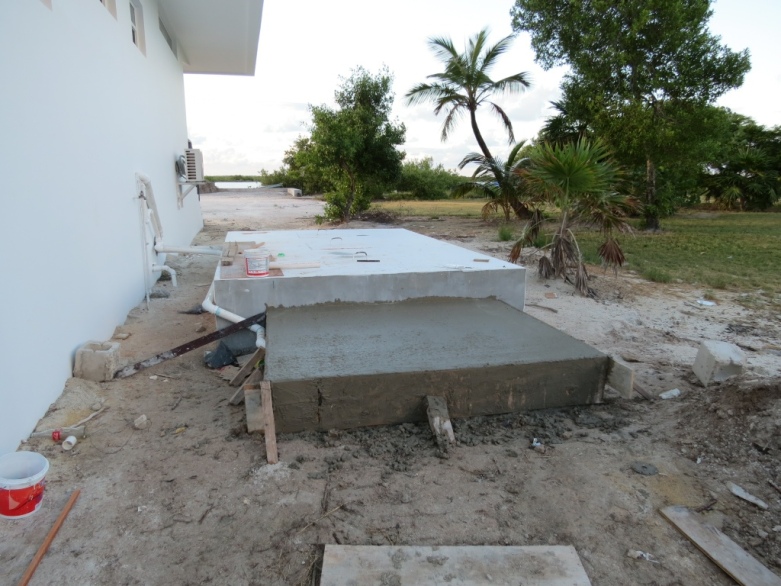 The headline for today’s edition is based on the title of the album released by The Rolling Stones in 1978 which reached number one in the US Billboard Hot 200 and number two in the UK Top 75 Albums chart.