The exertion of packing so much stuff on Wednesday must have got to me because I didn’t wake up until around 04.45 hours yesterday. Still early but…

Out on to the veranda with my iPad and a mug of black coffee for a couple of hours of ‘me’ time before Rose got up.Spent a bit of time reading The Times on-line and then focused on finishing off yesterday’s edition of the blog.

After a shower and a shave I got dressed and had breakfast (and another mug of black coffee) by which time Rose was up and ready for us to resume packing. This time the focus was on the paraphernalia we have managed to accumulate since relocating to Ambergris Caye.

Going through the cupboards and drawers I was amazed by just how much stuff we have managed to accumulate in just seventeen months. We came across stuff that we brought with us from the UK but there was still a hell of a lot of stuff that we have acquired since being here.

Working as a team we filled box after box clearing a drawer or a cupboard at a time and as each one was filled, strapped and stacked the condo we have been renting during our build in Ambergris Caye, Belize looked more and more like a storage facility.

I took time out to make contact with (Ismael) Milin Gomez who we have decided we want to appoint as our Customs Broker for the shipment we are going to organise from Miami. After a couple of attempts I managed to get through to Milin and he explained what I need to do -essentially get my list of purchases formally approved by the Belize Tourism Board – and what his and the other fees will be (between BZ$ 300-500 for him and then fees for an inspection by the Belize Agricultural Health Authority (I don’t why but this body is required to ‘clear’ imports), a fee from Customs (storing/handling the container) a fee for the inspection by the Customs officials and then a fee for a truck to take the container to our chosen barge operator. All up these fees will add up to over BZ$1,000. Then, of course, is the charge for barging the container to Ambergris Caye and delivering it to our home.

With Milin appointed I resumed working with Rose to clear a few more cupboards then we freshened ourselves up, had a late lunch and at around 14.15 hours headed off to visit our build in Ambergris Caye,Belize stopping on the way at numerous stores so that Rose could compare prices for the buckets, mops and brooms that we need for our new home (the guys are doing a good job cleaning the house up but…).

After what seemed like an age Rose had made her decisions and with a few purchases made at Riches Supermarket and a few in Castillo Hardware we had what we needed and eventually got to the house around 15.30 hours.

We went straight up the stairs to the First Floor and in to the hallway where we saw that Moses had started fitting the shelving in the hall closet (our mud room).

Just the hanging rail (for our raincoats) to go.

In to the kitchen where we saw that Moses (he has been a busy boy) had fitted the remaining handles for the cabinets. 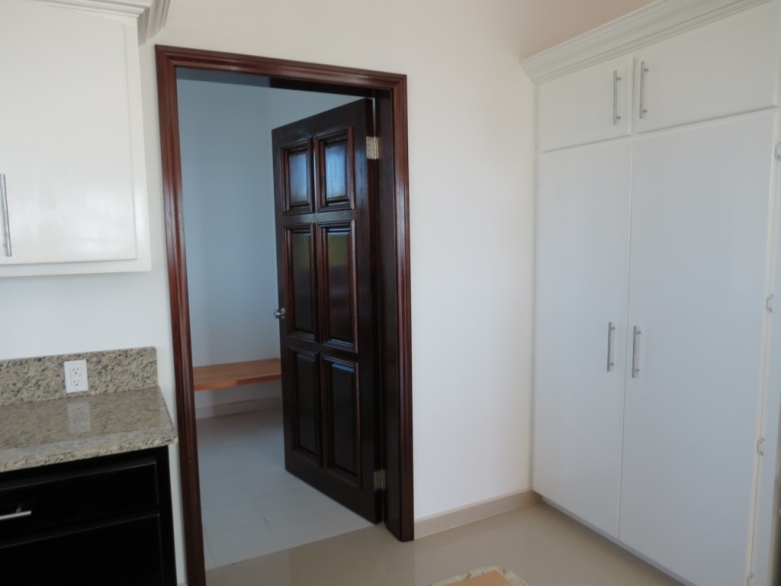 Up the stairs to the Second Floor where I found that Moses had also ‘found’ time to install the second of the shelving units for my walk-in closet.

With the shelving units in place they can now fit the skirting (base tiles) and Jose at ground level was cutting the tiles to size for this. 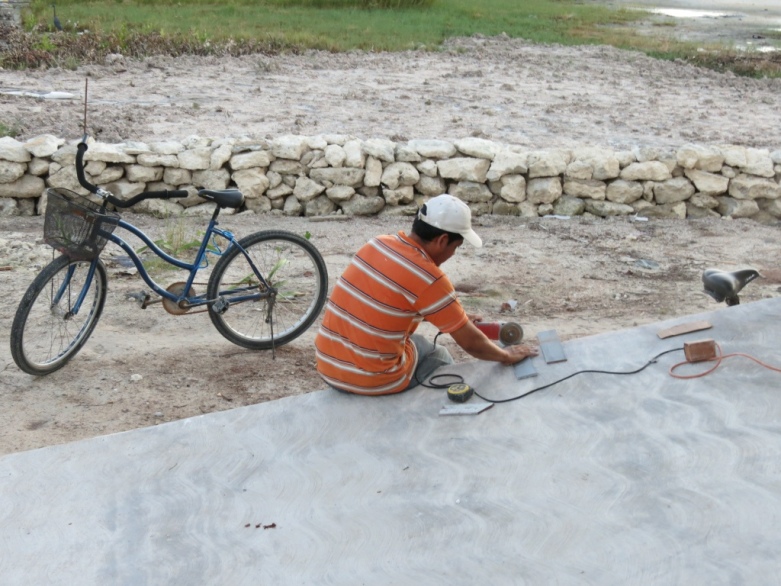 Back down to the First Floor where we found Alfredo in the north-west corner of the veranda applying a tidy-up coat of emulsion to the walls. 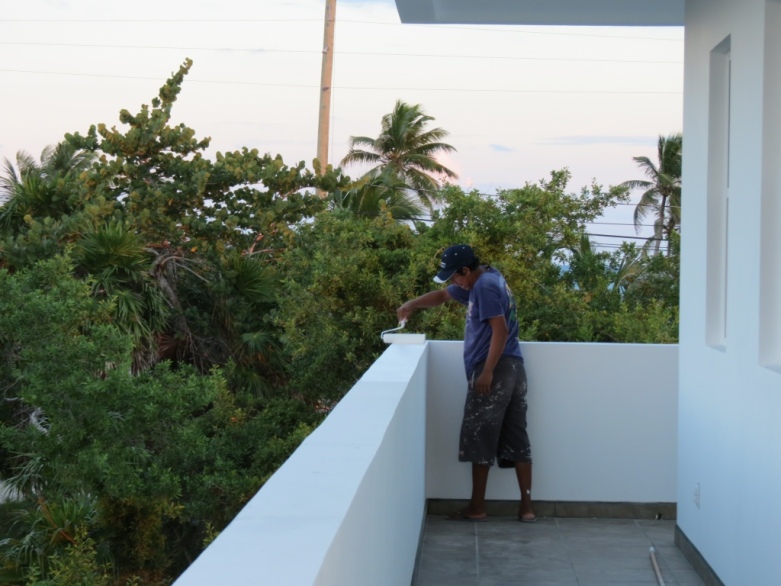 Looking out at the Caribbean I saw some holidaymakers enjoying some fishing.

Recognise anyone you know?

Down below work had started on the soak-away and leach field for the septic tank. 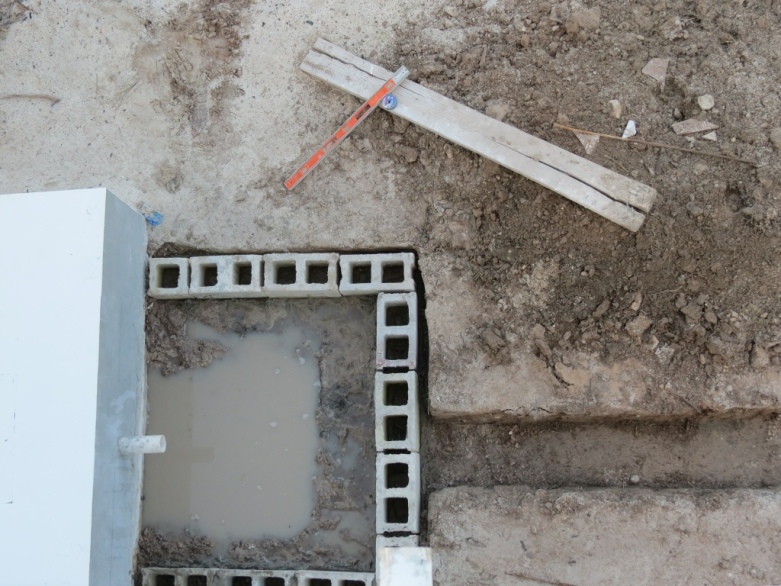 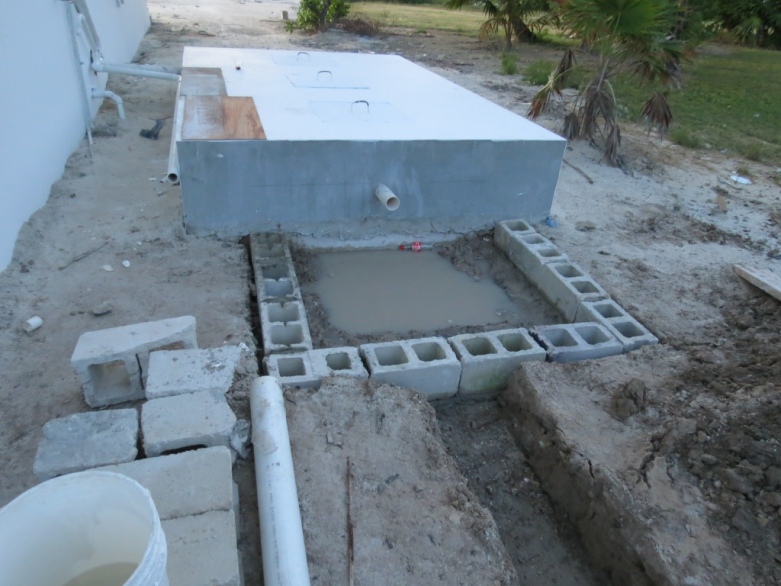 To the south of the house work continues on land filling the other lot that we have.

Working their way towards the waterlogged section.

And then they can tackle the area near the lagoon.

With our move so close Rose and I have decided that it is no use panicking. We will approach things one day at a time.

As we were leaving the sun was just setting. 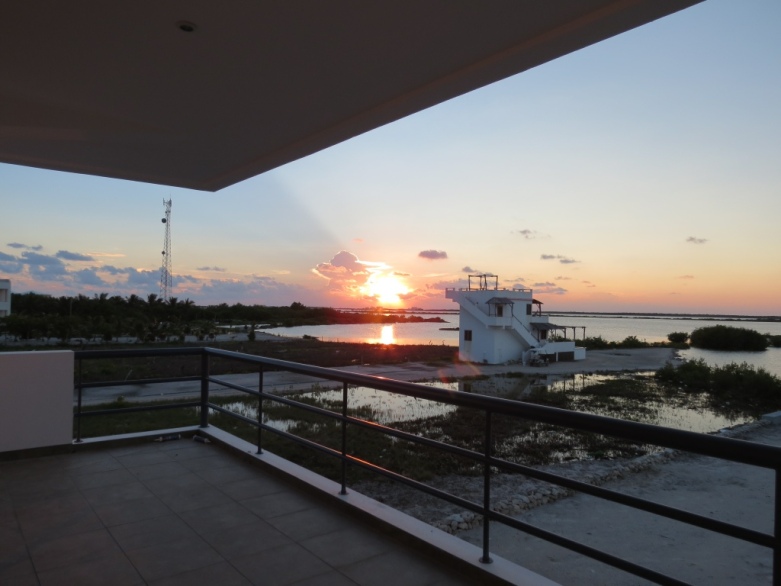