Must be starting to feel slightly better because yesterday morning I woke just before 02.00 hours. I tried to get back to sleep but failed miserably so I got up, made myself a mug of black coffee, grabbed the iPad and headed to the veranda.

I stayed out there long enough to have a ‘scan’ read (including the match report for the West Bromwich versus Arsenal match) of The Times on-line and finish my coffee but then I started to feel tired (which I feel is being caused by the painkillers and anti-bacterial tablets I am taking) so I went back to bed and slept through until 05.15 hours when I got up and went through the routine again.

I then set about pulling together yesterday’s edition of the blog and pressed the publish icon around 07.25 hours, nearly one hour later than the publishing target time I set myself a few weeks ago. Not bad though. Not something I am going to berate myself about.

I then showered, shaved and got dressed and headed off to Estel’s for breakfast – my first visit since It re-opened last Wednesday after a short ‘slow-season’ closure. Not too many people there so the service was exceptionally quick and the coffee was replenished frequently.

Checking the blog on my iPad I saw the edition I had created no more that ninety minutes before disappear before my eyes. A technical horror story. No matter what I tried I couldn’t retrieve it. As far as my iPad and the Internet were concerned it just didn’t exist. Some of you had read it but it no longer existed!

Deciding that sitting at Estel’s , as enjoyable as it is, was not the place to try and fix the problem, I went to the bank to make a withdrawal and pay the Belize Electricity Limited bill. With the ‘chores’ out of the way I returned to the condo we are renting during our build in Ambergris Caye, Belize and set about recreating yesterday’s edition again. It took me around sixty minutes – longer than I thought it would – with much of this time being spent trying to remember what I had written and in what order I had written it. Don’t know why I bothered really because the original no longer exists. Only it’s replacement.

I hadn’t been finished long when the ‘phone rang. It was Jose Gomez of Belize Logistics Services Limited, our stuff from the UK was going to be inspected by Customs and could I get to Belize City between 13.00 to 16.00 hours ? Of course I could, I told him.

Rose and I had just finished working out my travel plans when the ‘phone rang again. It was Jose. “Hold fire on travelling over. The weather has taken a turn for the worse. Delay your visit until tomorrow”, he told me. So, I did and Rose and I, instead, took a drive to visit our build in Ambergris Caye, Belize.

We got there shortly before 15.00 hours and on arrival met Daniel Camal, our building contractor, which was fortuitous because I had a cheque for him to cover some ‘additional to contract’ work that has been undertaken.

We spent a little time talking with Daniel and then took a walk around.

Outside the Ground Floor self-contained apartment was Victor (the welder) and his son who were working on the railings for the internal stairs that will connect the First and Second floors. 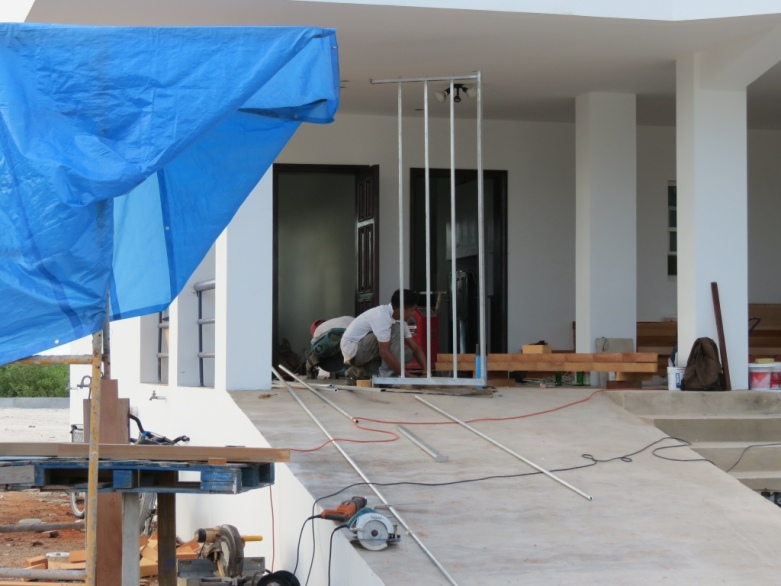 Aluminium railings that will be polished when finished.

Close by Moses was under a tarpaulin sanding down the treads for the internal stairs. 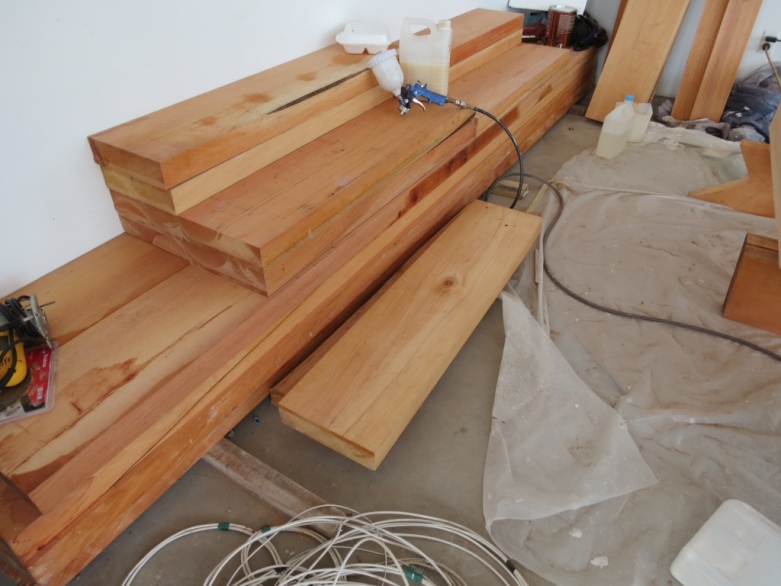 Treads waiting to be sanded.

and then with his colleague carried it up to the First Floor. 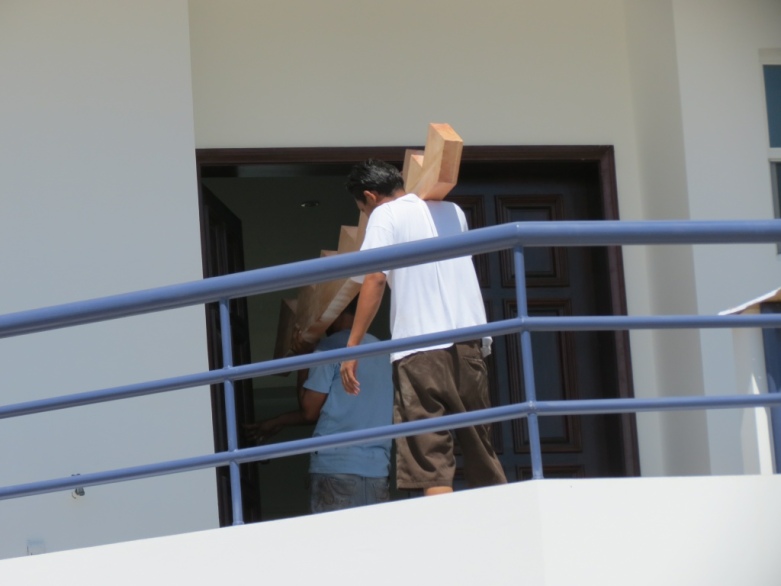 And through the door.

Not far from us the ‘snagging’ continued with Angel painting over the scuff marks on the entrance stairs that the fitting of the railings has caused. 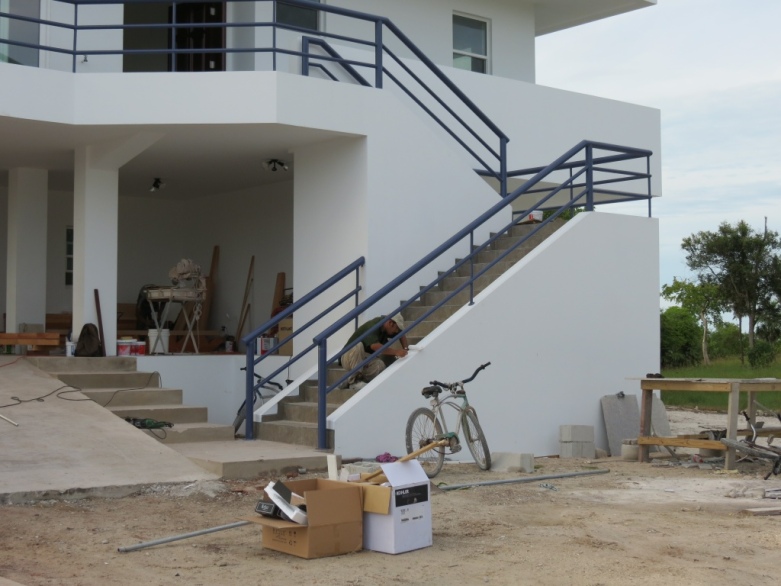 Angel working on the first flight.

And then the second flight.

Seeing that the granite for the island for the Ground Floor apartment was still on the workbench in front of the house we realised that Edgar (the granite man) had taken too much of the sugar cane derivative during the weekend so there would be no further progress until Tuesday.

Inside the house Alfredo was fitting dowels/plugs in the door panels before he rubs the panels and the doors down and applies varnish.

To the south of the house work continues to ‘fill’ our adjacent lot.

A long way to go but it is starting to look much tidier.

The headline for today’s edition is based on the single released by Janet Jackson in 1993 which reached number one in the US Billboard Hot 100 and number six in the UK Singles Chart.