It was all going so well yesterday morning and then…

Out on the veranda shortly after 04.15 hours with my mug of black coffee and the iPad. A lovely warm breeze. The only light coming from the monitor.

I read The Times on-line and got up-to-date with Facebook and Linkedin until shortly after 05.30 hours when I decided that I would start to pull together yesterday’s edition of the blog. With this start time I should have been able to achieve my new intended publication time of 06.30 hours

Once I had made a selection of the photos I would use the copy flowed fairly easily . This will come as no great surprise to regular readers of this blog I am sure – its much of the same stuff anyway.

Selecting a song title for the headline tested me the most but with this chosen and ‘worked’ in to the narrative I was on the home straight. Just had to proof read it and click the icon to publish. I was going to ‘hit’ the publishing deadline with around 10 minutes to spare. Or so I thought.

I didn’t though because with two paragraphs remaining to be proof read the iPad’s monitor went black. I had used up all of the battery power. I had the warnings. iPad users amongst you will be familiar with these I am sure . You know the thing, “8% battery remaining”. But in my infinite wisdom (!!!) I had chosen to disregard them.

Not unduly perturbed I plugged the iPad in to a power socket fully expecting it to recharge fairly quickly so that I could resume the proof reading and then publish. But nothing. Well, a feint flicker to indicate that it was charging but after thirty minutes and no sign of recovery I switched power sockets. Same again.

Sensing (not too difficult I assure you) my ever increasing levels of frustration Rose came to the rescue and lent me her old (yes she has two) iPad. OK so it has a pink case but I wasn’t going to take it anywhere. And anyway I have no doubts about my sexuality!

After loading the WordPress App I accessed my blog to find that none of the photos I had chosen and half of the copy had not loaded. A real bummer.

I needed to regroup so showered, shaved, dressed and had breakfast and then I knuckled down to ‘knocking out’ yesterday’s edition.

Feeling exhausted (mentally not physically) I then took the current book (Brick Lane by Monica Ali) I am reading (nearly finished it now) out on to the veranda and ‘chilled out’ until it was time for Rose and I to visit our build in Ambergris Caye,Belize.

We set off shortly after 14.30 hours and on the way there popped in to see Leo (the carpenter) at his workshop in Boca del Rio to show him a photograph of the bed we want him to make for us. If the price is right and the quality of workmanship is good we will then place orders for the other furniture we need. If the workmanship is not as good as we would like the bed will go in the larger bedroom in the self-contained apartment on the Ground Floor. Sorry Chris (my sister) that’s just the way it goes!

Pulling in to our lot shortly after 15.00 hours we saw Lloyd’s guys starting the landfill process for the lot we have that abuts the lot we are building on. Having cleared the scrub and bushes they were using the earth removed to create a channel for the rock wall to start ‘mopping up’ the waterlogged areas.

Lloyd, standing in our neighbour Jason’s waterlogged lot, surveying what needs to be done. A lot!

Approaching the house we could see that Victor (the welder) and his son had started fitting the railings for the Ground Floor.

Southern side of the house. 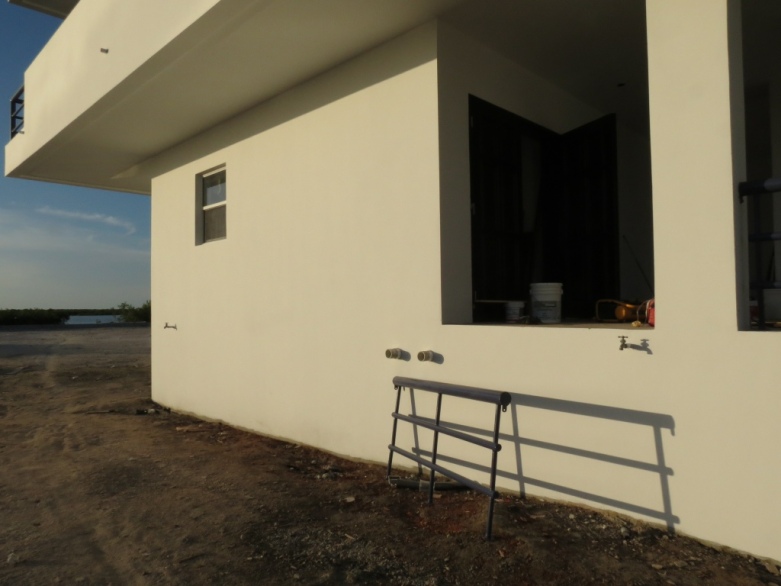 Second railing for the southern side ready to be bolted in place.

Railing on the northern side (near the Pump Room) fitted.

Heading up the stairs to the First Floor we couldn’t fail to see that work had begun on fitting the railings for the main entrance stairs. 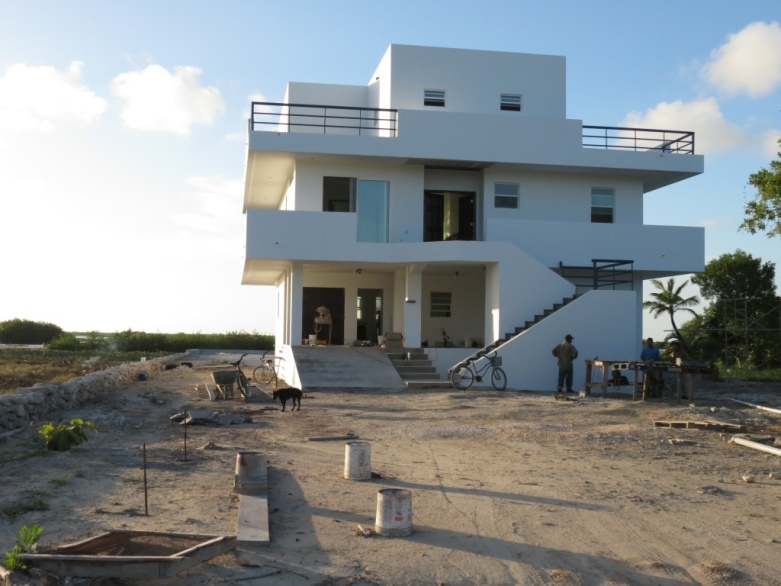 View of the front (eastern side) of the house.

In to the hallway to find that Moses had started to fit the louvre doors for the closet (our Mud Room). 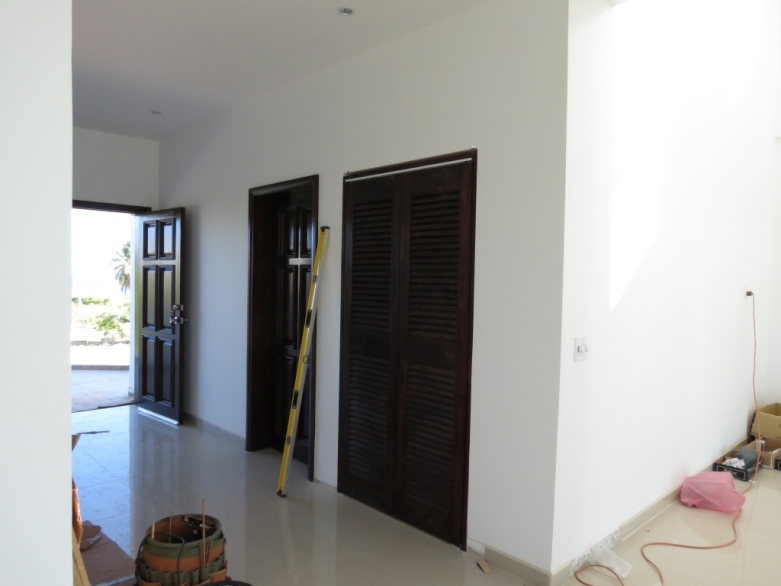 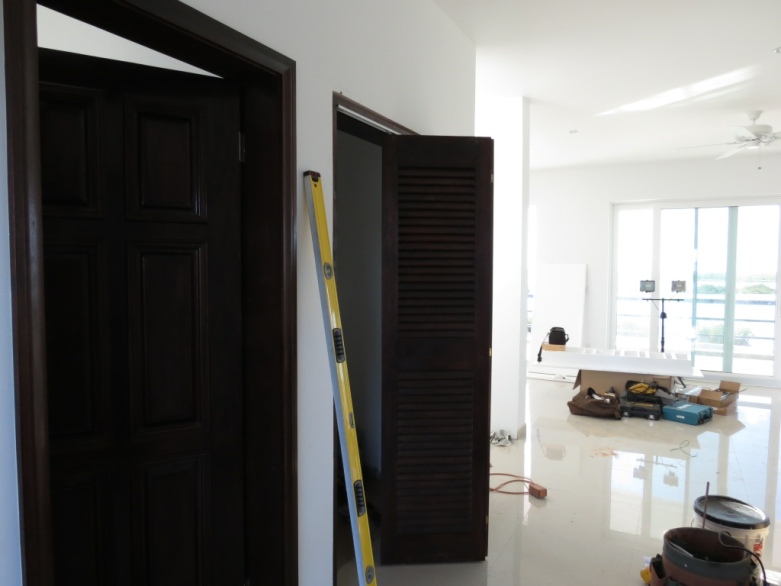 Around the corner in the kitchen Moses had fitted the doors and drawers for the kitchen island. 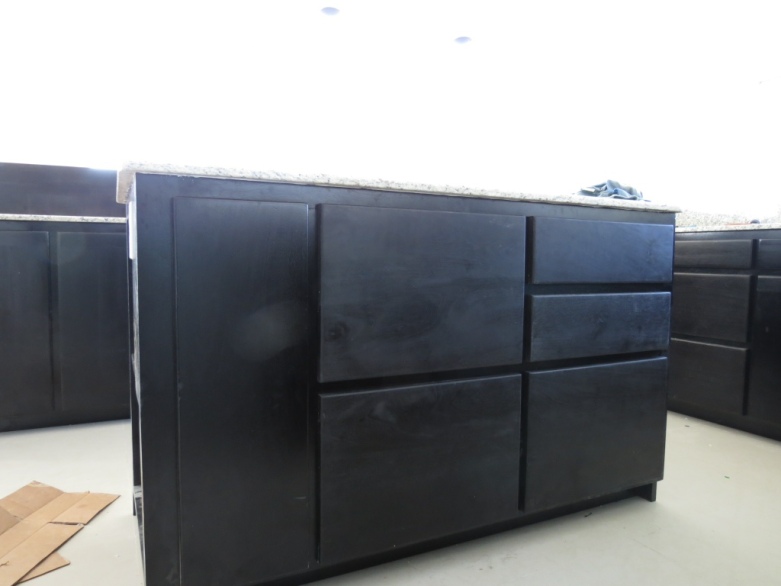 And Edgar (the granite man) had fitted the backsplash for the northern wall. 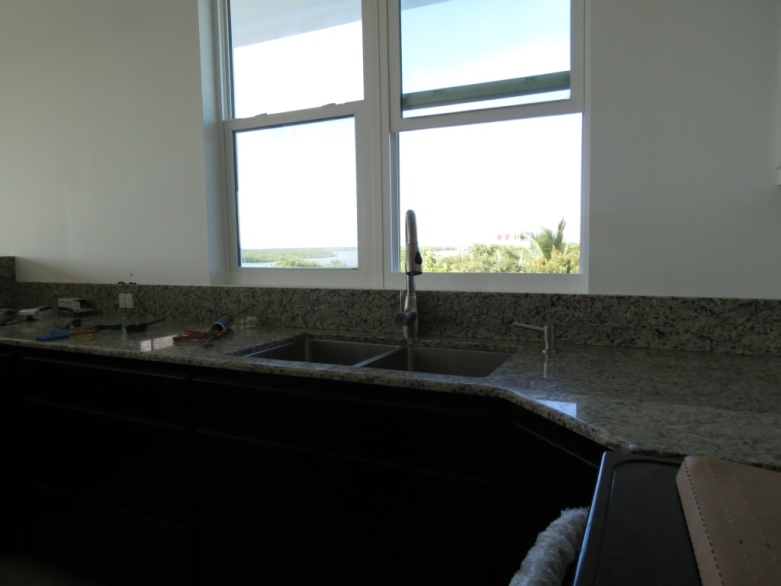 And Rolando had started work on the power sockets.

Bumping (not literally of course) in to Rolando he told us that he had fitted the pump for the well and that it is operational. We can now pump it up to flush the toilets!

Now need to get a metal door made and fitted so the pump doesn’t go ‘walkies’!

The headline for today’s edition is based on the single released in 1978 by Elvis Costello and The Attractions which reached number twenty-four in the UK Singles Chart.

Oh, and it looks like a new iPad is going to be added to the list of stuff we are going to buy in and ship from Miami!