Up and out on the veranda with my mug of black coffee and the iPad (of course) yesterday morning before 04.30 hours and straight in to my In Box to see if there was any word from Excess International Movers (the company we used to ship the stuff we had in storage in the UK to Belize) as to the whereabouts of our consignment.

There was! The ship that our stuff was loaded on to in Miami had arrived in Belize City on 11 September. Only three days later than we had initially been informed that it would arrive by. But a time lag of fourteen days before we were told of its arrival. Crazy! And infuriating.

Shipping arrangements from Miami through to Belize City were via Eurocaribe Shipping Services Limited which is a company that I have now struck off the list of potential shipping agents for the stuff we are going to purchase and ship from Miami.

We now wait to be told when our stuff will be inspected by Customs and barged over to Ambergris Caye. We know that it is very close now though. But, as far as I am concerned, I still haven’t found what I’m looking for until I can get my hands on it!

I felt like waking Rose up to let her know the good news but common sense (and my strong preservation instinct) prevailed and I elected (wisely) to wait until she got up. So, instead, I turned my attention to writing yesterday’s edition. Because a number of you (OK, two of you) have said that you like to read it before going to work I am going to try to publish it a little earlier with a target time of 06.30 hours local time (MY local time).

After showering, shaving, getting dressed and having breakfast (not long to go before Estel’s re-opens) I went out to take care of some bits and pieces (filling the ‘cart with gas, getting a five gallon bottle of water and withdrawing some money from the bank) . On getting home I telephoned the ‘mirror man’ who told me that he had been to our house to look at my mirror and he would collect it the next day and take it back to his workshop to carry out the necessary work.

Rose and I then had lunch and headed off to visit our build in Ambergris Caye, Belize delaying our journey only slightly (because it was on the route we take) to pick up on the latest ‘that was then, this is now’ photos.

Derek, another long time reader of my blog, had sent me some photos that he had taken of Maria’s fruit, vegetable and juices stand when he holidayed on Ambergris Caye in September 2011. Maria’s, so Derek informed me, became a twice daily shopping experience.

And nor has the stand. 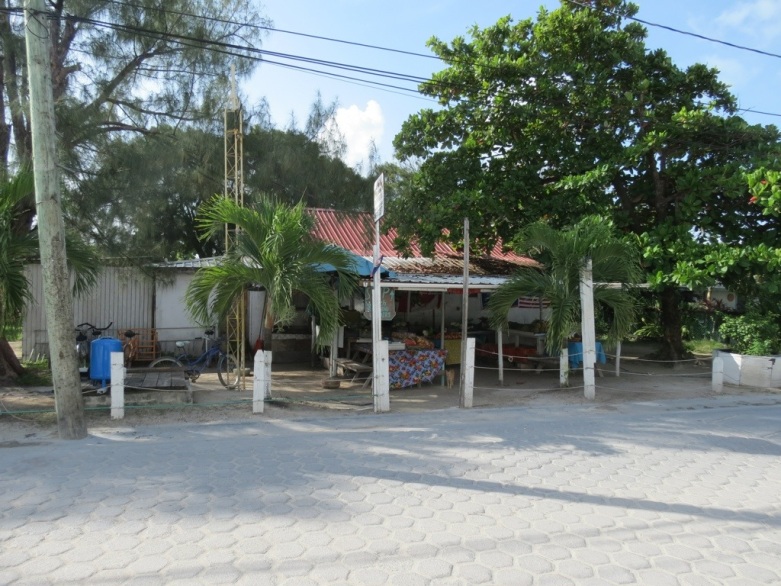 And neither has the service. You still get great fruit, vegetables and juices from Maria’s! And very often she ‘throws in’ an item or two for free.

Continuing with our journey Rose and I got to our lot just after 15.30 hours and as we parked the ‘cart could see that Lloyd and his guys hadn’t quite managed to finish the low, rock wall. 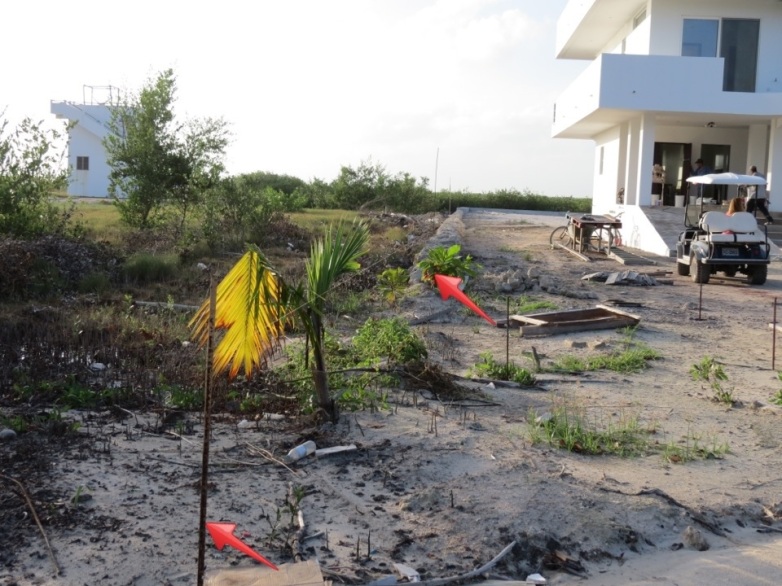 Red arrows indicate what remains to be done.

Noticing Mose’s bike ( this must mean more carpentry work had been delivered) we headed straight in to the Ground Floor self-contained apartment where we found our suspicions to be correct.

Pleased with this we went straight up the stairs to the First Floor and in the hallway saw that the louvred doors for the hall closet (our mini mud room) had been finished.

Just need to be hung now!

Around the corner and in to the kitchen where we saw that the island was in position. 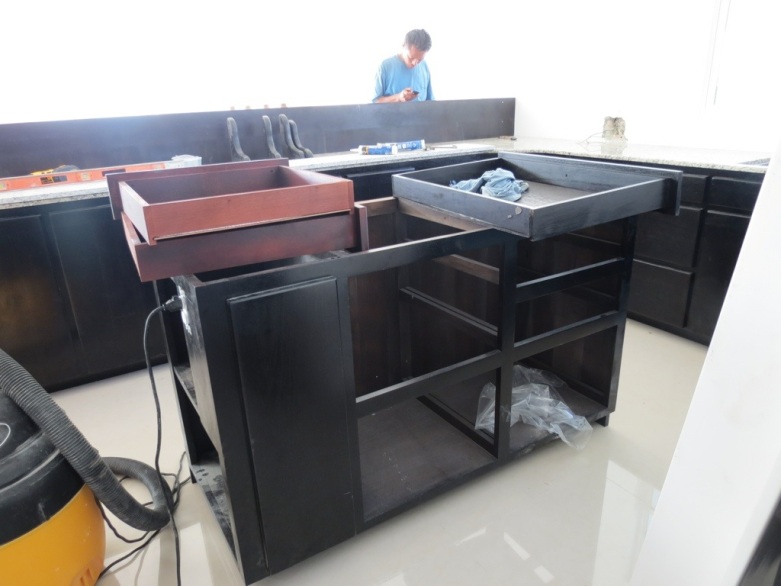 Moses in the background taking a break from fitting the breakfast bar.

In the living/dining room area was more evidence of how busy Moses had been (he even worked on Independence Day!).

The inside (equipped with racks) of one of the doors for the pantry (larder). 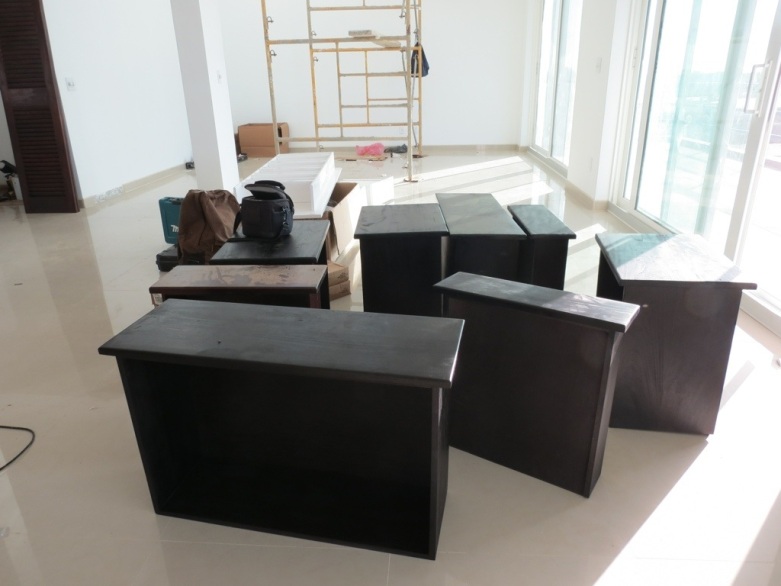 Drawers for the kitchen cabinets.

In the kitchen the work top area around the sink was taking shape and the washing-up liquid dispenser had been fitted.

I am really starting to like the look of my new ‘office’!

And in my other work area , the laundry room, Rolando had fitted the taps (faucet) for the sink.

OK so it needs to be plumbed in. But it’s a start.

What I failed to mention earlier is that when we pulled in to the lot we saw that the railing for the north-east corner of the Second Floor was up there so I (by now very expertly) climbed the scaffolding to take a closer look.

Positioned ready for bolting in to place.

Looking down I could see Victor , the welder, ably assisted by his two sons, working on the remainder of the railings.

They were taking advantage of the shade on the northern side of the house and making good use of what’s left of the scaffolding as a platform for spraying.

Looking to the east I saw Lloyd at the roadside talking to someone who I later found out was from the San Pedro Town Council. He had come to make certain that we had not erected a fence without applying for and being granted approval. We haven’t and we won’t. I know the score. It’s on my list of things to do! 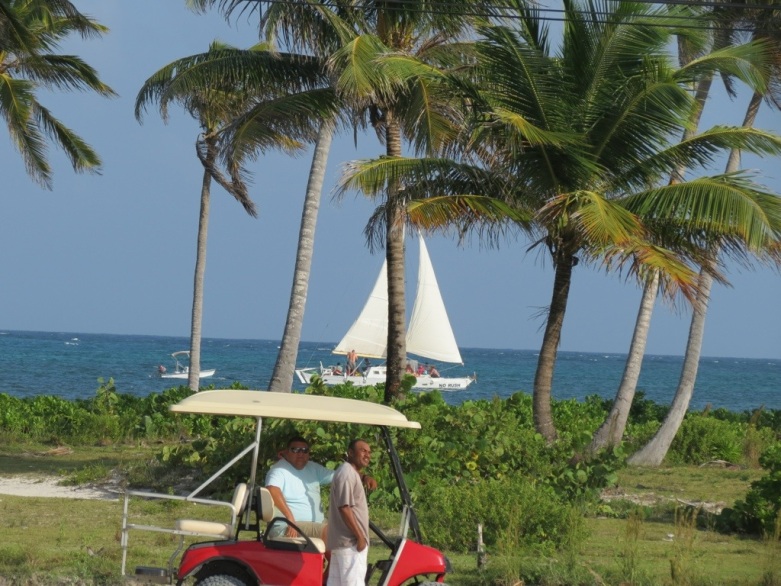 The headline for today’s edition is based on the single released in 1987 by U2 which reached number one in the US Billboard Hot 100 and number six in the UK Singles Chart.