The rainy season has shown itself with a vengeance during the last few weeks. I am sure that it has not been the case but it seems like it has rained every day and yesterday was no different.

Out on the veranda yesterday morning shortly before 05.00 hours the rain was lashing down and so strongly at one stage that I had to retreat to the condo to avoid getting soaked.

Weather such as this is obviously not good (or welcomed) by the tourists that are visiting Ambergris Caye but it does have its benefits. Well, for me at least.

I just love the sound of the rain hitting the fronds of the coconut trees. I find it restful. Therapeutic. Very calming. Not that I feel at all agitated but the sound, for me, creates a sense of serenity.

Aside from the state of mind it induces in me it has a more practical benefit. It’s helping to fill the 45,000 gallon rainwater collection tank we have under our build in Ambergris Caye, Belize.

The rain was still coming down when Rose and I, suitably attired in our rainwear, set off to visit our lot shortly after 14.00 hours. We set off earlier than usual because we had a meeting scheduled with Daniel Camal, our building contractor, for 15.00 hours and we wanted to have a good walk around and ‘look’ before this.

Pulling in to the lot we saw that the welder was at work – shielded from the rain by a tarpaulin tethered to the trees and the bodega – was working on the second of the railings for the Second Floor’s eastern side. 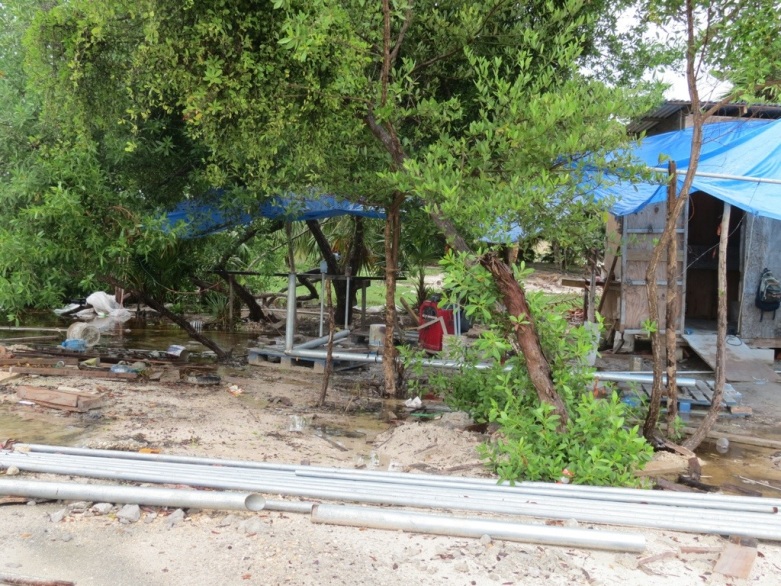 Vertical posts now starting to be welded in place.

Ahead of us we could see that Christopher and Angel had finished laying the final coat of cement (dyed Buff) for the ramp and were working on the steps for the Ground Floor. 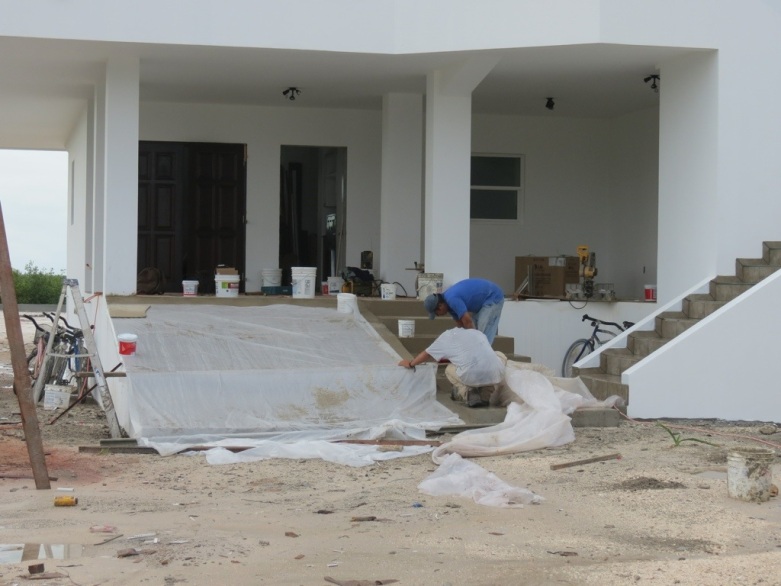 Ramp protected from the rain by plastic sheeting.

To the left (south) of us we could see that the guys that we are employing to construct a ‘wall’ of rocks one foot high by one foot wide along the southern side of our lot had started work. 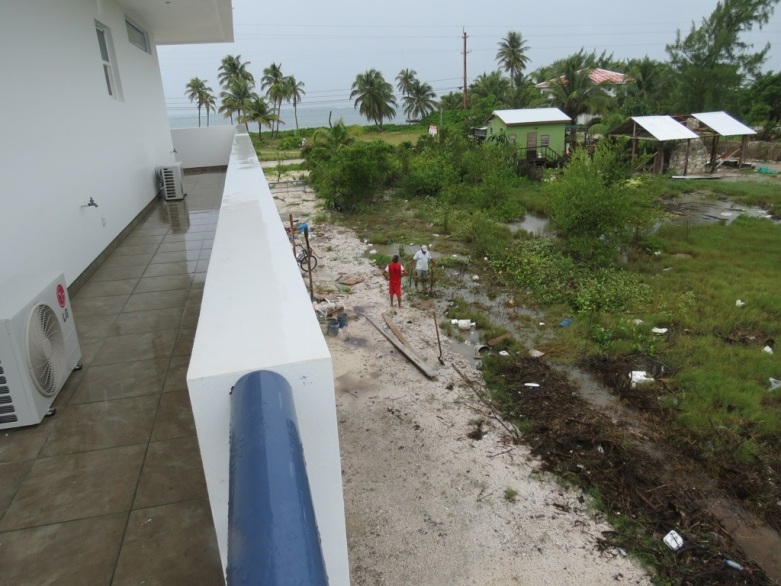 Clearing the land in preparation for the ‘wall’ 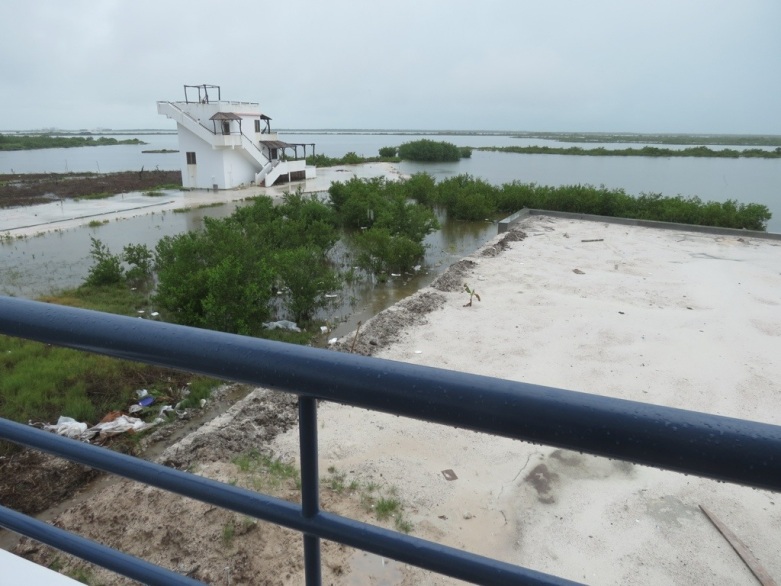 Channel dug for the ‘wall’

The ‘wall’ will be positioned inside the fence that we intend to have erected around our lot. With a ‘wall’ constructed along only the southern side (this is the lower lying section of our lot) we hope to eradicate or at least minimise the amount of erosion of land fill. Time will tell, of course.

As we got closer to the house we could see that Moses had finished hanging the doors for the Store Room/Garage. 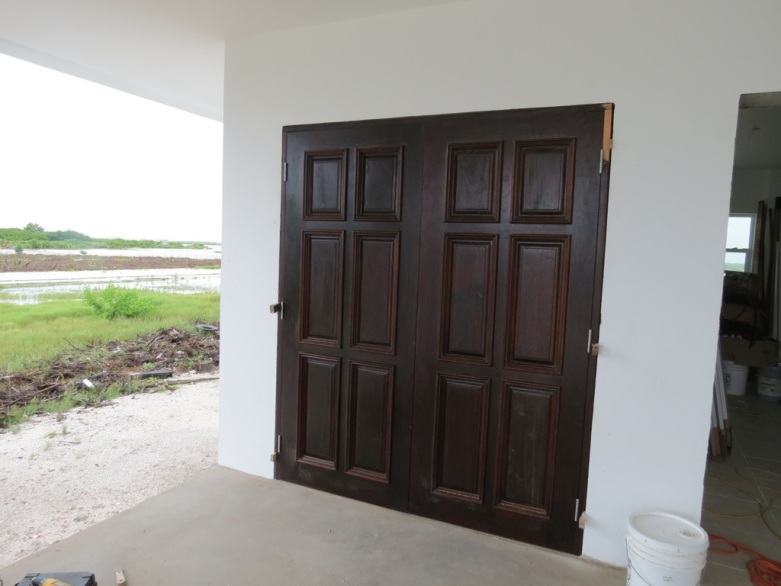 And was working on the architrave for around the doors. 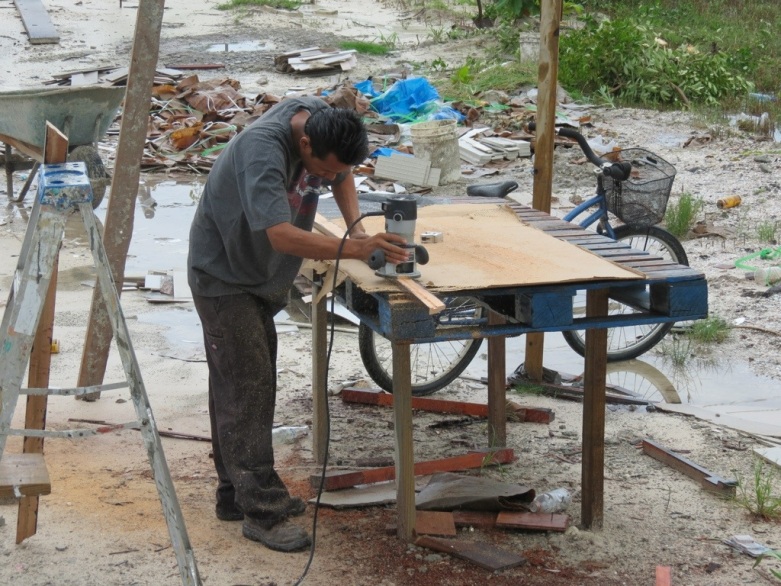 Moses at work during a ‘rain free’ period.

Up the stairs to the First Floor where we saw that Rolando had finished fitting the ceiling fans for the kitchen/dining/living room area. 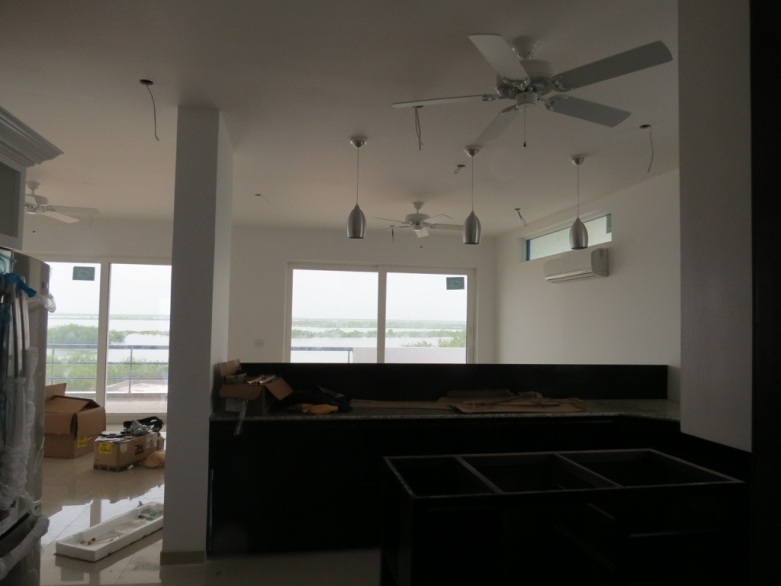 View from the Utility Room. 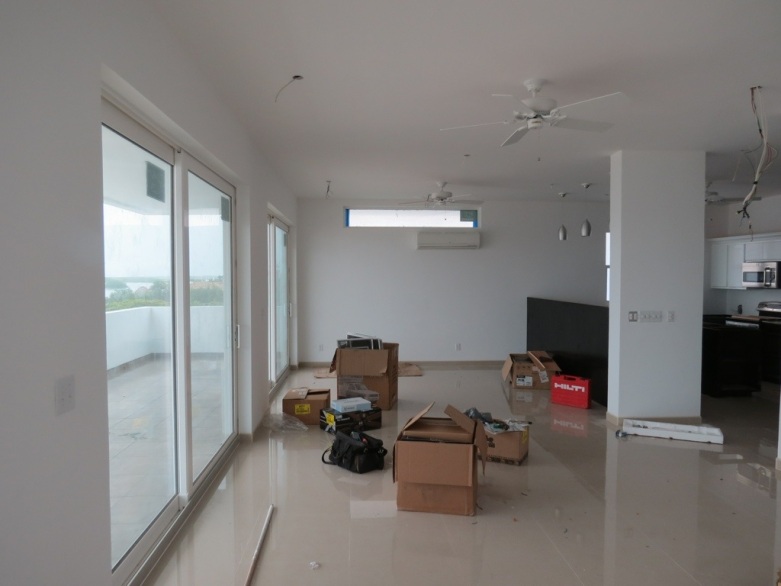 View from the ‘living’ area.

We were still on the First Floor when Daniel arrived for our meeting, the primary purpose of which was to ‘bottom out’ when our build in Ambergris Caye, Belize would be finished. Four more weeks, Daniel told us. So, on 12th October we could be moving in to our new home!

Feeling buoyed my elation was somewhat deflated in the evening when the Pittsburgh Steelers failed to beat the Cincinnati Bengals. Why should this deflate me I can ‘hear’ you thinking. Well, I had entered the weekly ‘pool’ that Carlo & Ernie’s Runway Bar & Grill is running and needed the ‘Steelers to beat the ‘Bengals by a combined points tally of forty-seven points or more to win the pot. 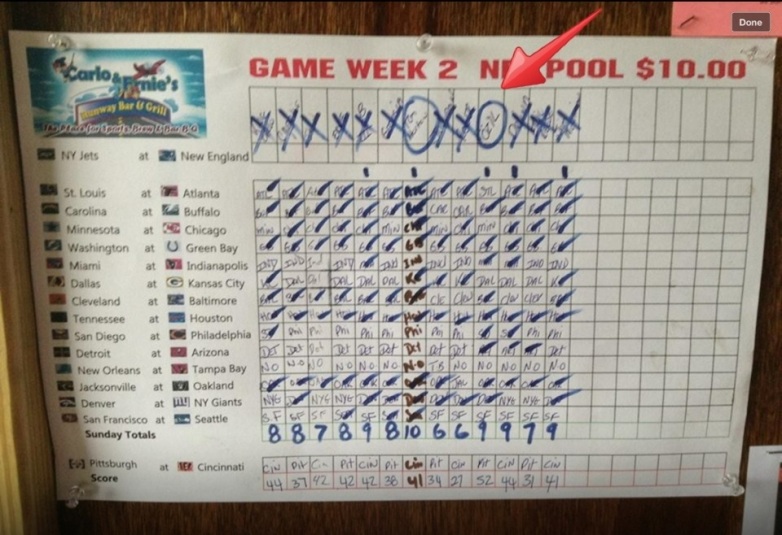 I am Özil (in honour of Arsenal’s latest signing). So close but … ( sounds a bit like Arsenal !).

I was beaten to the pot by Tom Horton of the Black Orchid Restaurant. No disgrace though. I am English after all so what do I know about the NFL? Nothing actually. I pick my choices based on the ‘nicknames’. Haven’t got a clue about form!

The headline for today’s edition is based on the single released in 1999 by Supergrass which reached number nine in the UK Singles Chart.