Regular readers may be wondering why I have not mentioned going to breakfast at Estel’s since last Saturday’s edition.

Have I had to tighten the purse strings? Have I -at long last – realised that a fried breakfast is perhaps not the healthiest way to start my day ( well it doesn’t start my day but you know what I mean) ? Are they using a new cook? Have I found another breakfast hangout?

No. None of these reasons. It’s far, far more simpler than that. Estel’s has had the temerity to close for a holiday. And, I don’t know for how long!

I’ve been going through severe withdrawal symptoms but am gradually pulling through. I am pretty certain though that the ‘habit’ will return when they re-open for business! Lack of willpower? Probably. OK, definitely. Hurry back Estel’s. I miss you.

Not going for breakfast did have a benefit though. I spent some time trying to find out exactly where the stuff we have shipped from the UK is. We used a company called Excess International Movers and the information they provided for the Atlantic Sea crossing was extremely accurate but then things became less clear.

Following a telephone conversation yesterday with Jose Gomez of Belize Logistic Limited, we understand that our stuff could arrive in Belize City next Monday. Or, Tuesday. Stay tuned to find out!

In the afternoon -15.15 hours to be exact – we collected Rose and Bob to take them to our build in Ambergris Caye, Belize for a look around.

On the way in to the Ground Floor self-contained apartment we saw that the guys had started to lay the final coat of cement (dyed Buff) for the exterior floor. With the final coat it looks so smooth.

After giving Rose and Bob a tour of the apartment we headed up the stairs to the First Floor avoiding Christopher on the way who was working his way down the steps with the grouting.

Not many to go now.

Up in the living/dining room we found loads of boxes. Our ceiling fans – for the apartment and the main house – had arrived.

Hopefully next week the boxes won’t be there.

Since her accident Rose (my Rose that is) hasn’t been up the scaffolding to the Second Floor but yesterday she regained her confidence and up she went. 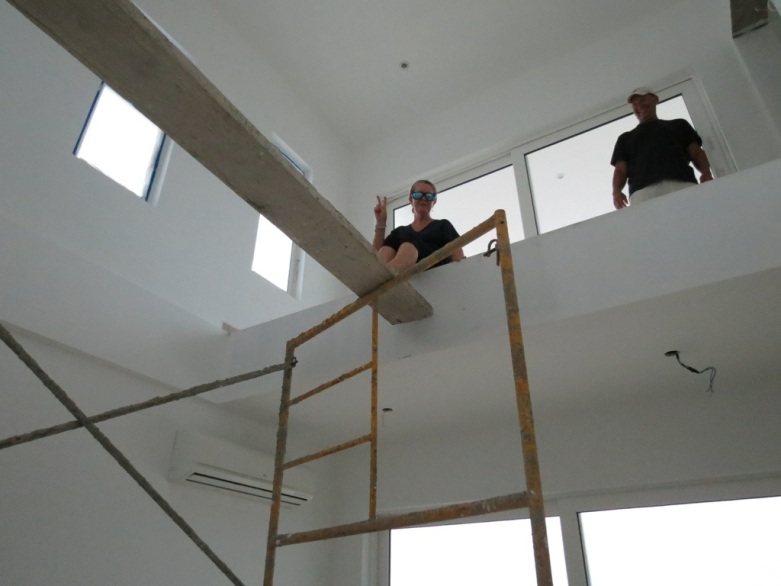 I’m not used to Rose looking down on me.

On the way out of our lot we walked to the north-east corner to show Rose and Bob our well and to our surprise found that the guys had finished painting it. 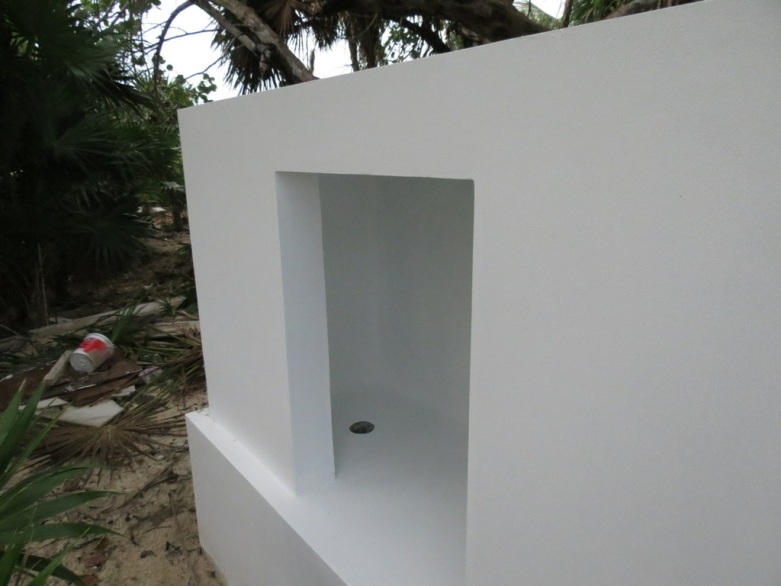 On the way home we had a couple of Belikins with Rose and Bob as a farewell drink prior to their departure the next day. We look forward to enjoying their company again when they return next February.

The headline for today’s edition is based on the single released in 1999 by Santana and Rob Thomas which reached number one in the US Billboard Hot 100 and number three in the UK Singles Chart.