With it being a public holiday in Belize yesterday to celebrate and commemorate the battle of St George’s Caye and needing to recover from my exertions (I am getting older!) of the previous day I decided that it would be a ‘blog free’ day for me (and you if you were waiting for an edition to be published!).

From the time (around 05.00 hours for those of you that ‘like’ this kind of detail) I got out on to the veranda it had the ‘feel’ of being ‘one of those days’. You know the type. Rainy. Overcast. Dull. The kind of weather that might encourage you to grab a book and go back to bed.

Well I didn’t go to those lengths but I might just as well have done because I couldn’t even muster up the enthusiasm (or energy) to go in to town to watch the celebrations. Fortunately not everyone is as easily influenced by weather conditions as I am and you can get a very good ‘feel’ for what the parade was like from the edition that San Pedro Scoop published.

Rose and I did spend a bit of time (well actually quite a lot time) running through the list of items that we are going to order and ship in from the States for our build in Ambergris Caye, Belize under the Qualified Retirement Programme.

It got to around 16.00 hours and we both decided that we had just had enough of Internet ‘shopping’ so we got ourselves ready and headed off to Carlo & Ernie’s Runway Bar & Grill to watch the World Cup Qualifier between the USA and Mexico.

We hadn’t been there long (think we were on our second Belikin -and they don’t take too long too drink!) when we were joined by Rose and Bob, a couple from the States who are researching for their big move to Belize next year (Bob is chronicling their travels in his blog) . We have only been in their company a few times but it seems like we have known them for an age. Conversation flows so easily and before we knew it was time for us to ‘say’ our goodbyes to our newest friends and head home. Oh, the USA beat Mexico by two goals to nil.

What with taking the day off yesterday I haven’t brought you up-to-date with what Rose and I saw when we visited our build in Ambergris Caye, Belize on Monday. Before I do though I should mention that on the way there we stopped off at the Ambergris Hope Clinic so that Rose could have the stitches from her leg removed. It was a painless (well it was for me) experience that was carried out in around ten minutes by Nurse Veronica who distracted Rose by telling us how she became a nurse.

We got to our lot around 16.00 hours and as we pulled in saw that the railings for the south-west corner of the First Floor had been sprayed.

I am going to do my utmost to be ‘there’ when the guys lift it in to place!

Up the ramp to the Ground Floor where we found Christopher, José and Alfredo laying the final coat (dyed Buff) of cement for the floor of the Store Room/Garage.

Before heading up the stairs we saw that they had already laid the floor for the Pump Room.

Up the stairs and in to the dining room area and we saw it. An air-conditioning unit (the first) had been installed.

Bolted to the floor of the northern veranda.

Looking across the room in to the ‘living room’ area we saw that Rolando had fitted the bracket for the next unit.

And it was time to lift the unit in to place.

Wilson (L) and Rolando (R) lifting the unit in to position.

Outside on the southern veranda Moses was pulling the tubing through the cavity in the wall.

And with this done Rolando was able to able to slot the wall unit in to the bracket. 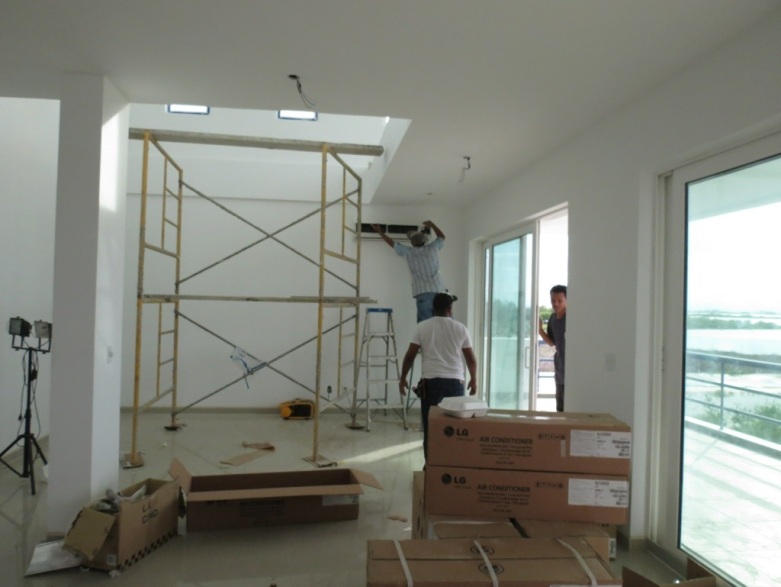 With all of the ‘electrics’ now being fitted the control box in the Utility Room is now starting to look more and more ‘busy’.

Rolando’s ‘legend’. Or is it, Rolando is a legend?

Before leaving I climbed the scaffolding to see how the newly laid dyed cement floor for the veranda/roof terrace was drying out.

The headline for today’s edition is based on the single released in 1970 by Arrival which reached number eight in the UK Singles Chart.