With clarification/confirmation of the monetary cost of stuff that we can import for our build in Ambergris Caye, Belize under the “QRP” (Qualified Retirement Program) I spent what seemed like hours (it was hours which is why it seemed like it) reviewing the list that we had drawn up of the things we need (OK, for ‘need’ you could say we just ‘want’) and then searching the Internet to make price comparisons.

Our target is to have the list complete, orders placed and delivered to the shipping agent in Miami to connect with a service heading to Belize departing on either 27 August or 3 September. We are then hopeful that within ten days of departure the stuff would be with us. The earlier sailing would be better but …

I started the task at around 05.00 hours (after I had read The Times on-line) out on the veranda where there was a nice breeze but I sensed always the threat of rain (its that time of year!). The rain held off but the sky did show threats of it.

View from the veranda at around 05.30 hours.

With eyes tired from so much browsing I showered, shaved got dressed and made breakfast and by the time I had returned to the computer for another session of searching I had received an email from Benny’s informing me that our appliances (ovens (ranges), microwaves, refrigerators, washer and dryer) had been delivered to the port in Belize City to be brought over to Ambergris Caye on the Krystal Shipping barge leaving later in the day. Some of Daniel Camal‘s ( our building contractor) guys will collect these when they arrive and deliver them to our build in Ambergris Caye, Belize.

I continued with the price comparison exercise until it was time for a light snack before Rose and I headed north for a look at our house.

On the way there we stopped for a few minutes (what’s a few minutes when you have so much time?) to see how the beautification project for the Boca Del Rio park is taking shape.

Looking across the mouth of the river from the north.

And there are three of them.

And some form of climbing frame for the children (and some adults I am sure).

Looking across the river as I headed back to the golf cart I was reminded of times gone by when I looked at this sad old building.

In the early 2000s – before the opening of the Sir Barry Bowen Bridge when the hand-ferry was the means of getting to the northern side of the island – this was the place to be on a Sunday afternoon. “The Hammock House”, or, as it was when it opened, “Barefoot Skinny’s Hammock House”.

Anyway, enough of living in the past, lets get back to the present, our build in Ambergris Caye, Belize..

When getting to our lot at around 15.30 hours we wandered over to have a chat with the welder. Not much of a conversation really because our Spanish (on our list of things for improvement) is rubbish and his command of English is about as good. We were able though to establish that it will not be long before the railings for the western (lagoon) side of the First Floor are finished. 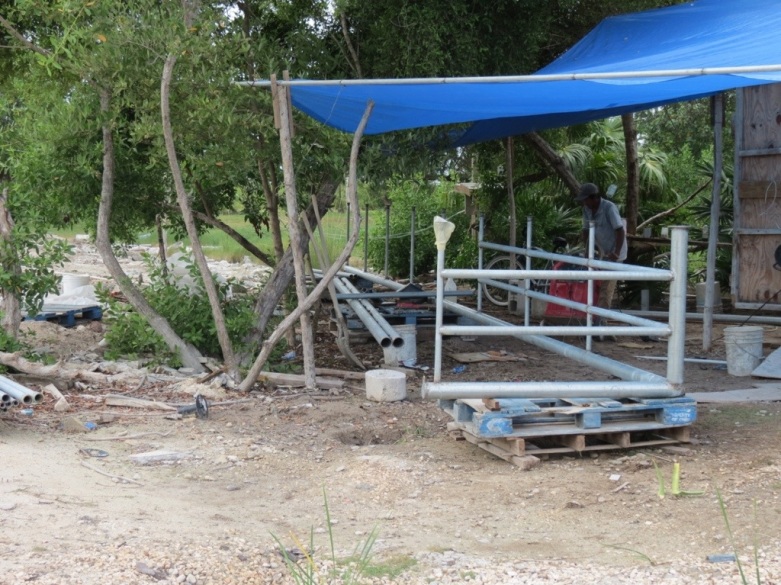 In to the Ground Floor self-contained apartment where Alfredo and Angel were applying the first coat of masonry sealant to the wall and ceiling in the living/kitchen room.

Starting off in the kitchen area so that Moses and George can start fitting the cabinetry.

Up on the First Floor Manuel was finishing off laying the floor tiles in the corners. Lots of tile cutting for these sections to create the right slope so that rainwater will run away via the pipes set in to the veranda walls. 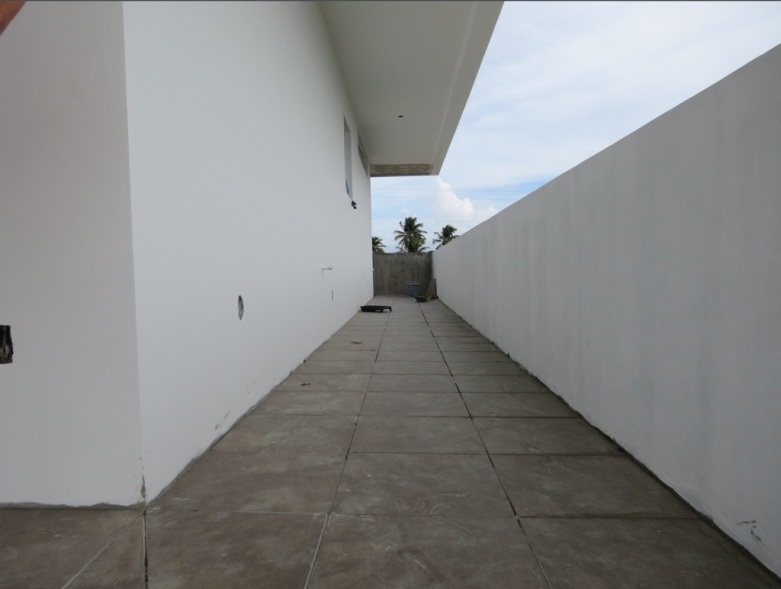 With the tiles laid the slope, running from left to right, is now discernible.

In to the dining room area and we saw Christopher applying the grouting for the skirting (base) tiles. There really are a lot of these tiles to grout.

Looking over in to the kitchen area we saw that Moses and George had fitted the cornice for the cabinet that will be over and around the oven (range).

Quickly up the scaffolding (we are becoming quite adroit at this now) to the Second Floor where Moses and George had started fixing the door jambs.

From the bedroom in to my bathroom.

Between the walk-in closet and the bathroom. In the background is Appolito cleaning the walls in my shower area.

On the way home we, like everyone else, were forced to take a slight detour via Carlo & Ernie’s Runway Bar & Grill because of the (much needed) road repairs for Coconut Drive in front of Ramon’s Village Resort. 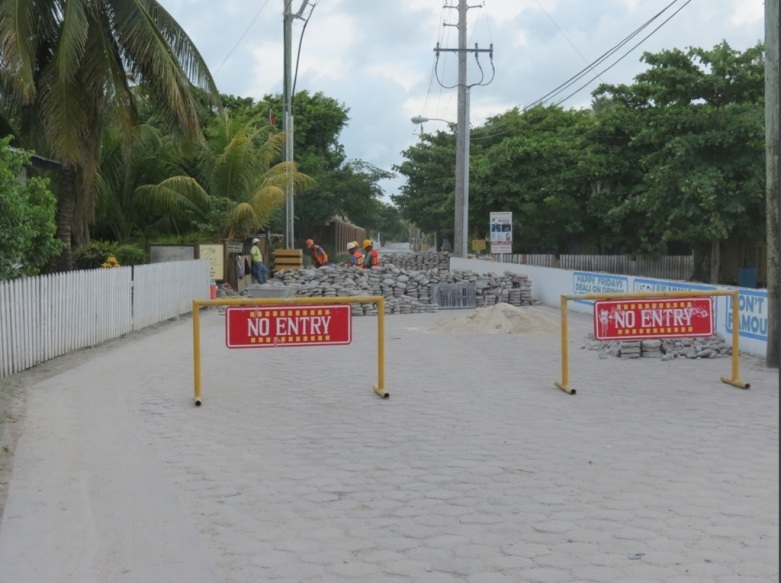 Detour through the bar’s car(t) park. If Carlo and Ernie had a toll booth in operation they would be making a fortune. It is busy!

The headline for today’s edition is based on the 1969 single by Jethro Tull (featuring the distinctive style of Ian Anderson) which eventually reached number eleven in the US Billboard Hot 100 and number three in the UK Singles Chart.