Got up yesterday morning really looking forward to the day ahead of me. This is the state of mind I generally have but yesterday was different. It was the start of the Premiership season and Arsenal’s first game, a home one against Aston Villa.

Sitting on my veranda with a mug of black coffee I had a sense of trepidation. How will Arsenal fare this season with a lack of any meaningful acquisitions? Also would I be able to access their game on the TV? Why was I concerned about this? Because screening rights for the EPL (English Premier League) moved this season from Fox Soccer (which I have always been able to find/access on the TV) to NBC? Last season Fox Soccer televised at least three games simultaneously. Would this be the case for NBC?

By 08.00 hours (the local time for kick-off) I had located the NBC channel (103 for anyone that is interested). Even better than that – (or so I thought at the time)- the Arsenal match was the game that was going to be screened. Ninety minutes later (actually throughout most of the ensuing ninety minutes) I wished it hadn’t been. “Why?” I can ‘hear’ you ask. Because Arsenal were abjectly and maladroitly poor and, not surprisingly, lost the game.

At 12.30 hours in dire need of a pick-me-up Rose and I (loaded with brass in pocket – well, bank notes anyway) went to the Belize Yacht Club to attend the auction of hotel chattels that was due to commence at 01.00 hours. We thought that there might be one or two items (recliners, table & chair set for the veranda) that could be suitable for our build in Ambergris Caye, Belize.. A quick look at the items to be auctioned and we knew that this was not going to be the case. All were in a fairly tatty condition and some of the items published (in the San Pedro Sun) to be available for auction (eg recliners, filing cabinets, sixty inch TV) were not on display. Seemed strange but …

We hung around for a while in the hope (mistakenly) that something good had escaped our attention. It hadn’t. So after around forty-minutes there we left and headed home.

With two disappointments in the day so far we needed a fillip. There was only one thing for it. A visit to our build in Ambergris Caye, Belize. That never disappointments us. In fact we always get a boost when we go there.

Arriving at around 15.30 hours ((around thirty minutes before the guys pack up for the weekend (well Sunday actually)) we went straight to the Ground Floor self-contained apartment to see how Wilson, the newest member of the team, was getting on with tiling the en-suite for the smaller of the two bedrooms.

Up the stairs to the First Floor where we found that Manuel had started laying the floor tiles for the final section – the eastern side- of the veranda. 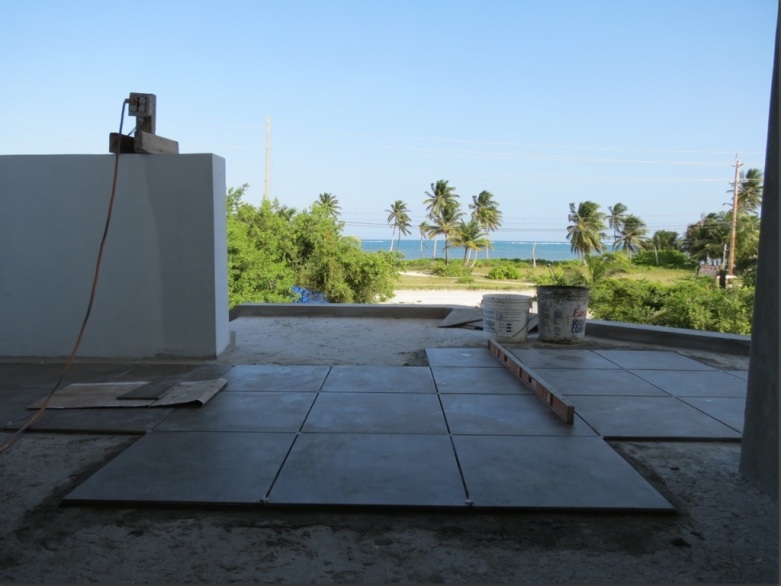 Inside the house Christopher had been busy applying grout for the skirting (base) tiles in the hallway.

Starting to have a finished (nearly anyway) look now.

In to the kitchen where we found that all of the base units for the northern side of the kitchen had been fitted.

With these units in place it’s a lot easier to imagine what the kitchen will eventually look like.

How the northern section on the kitchen will be laid out.

Up on the Second Floor Ernesto had been (there are a lot of tiles) working on the grouting for my bathroom. 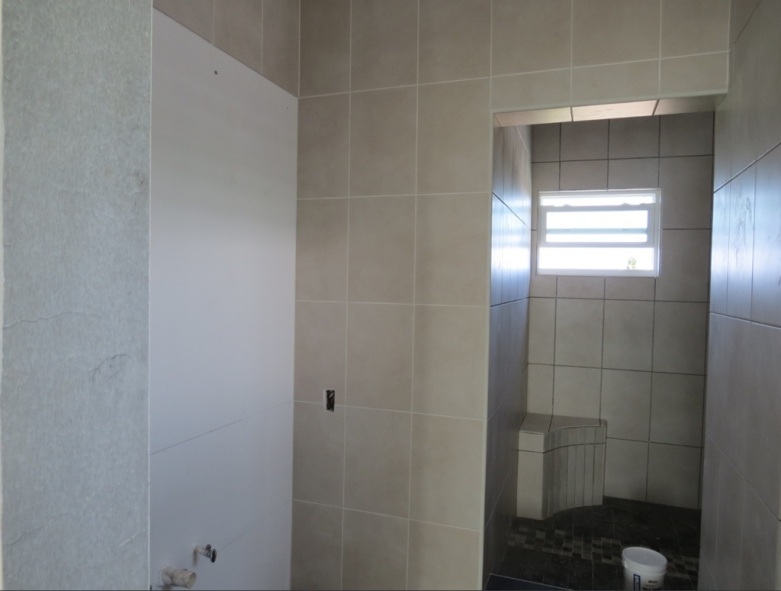 Section where the vanity unit will go is complete.

Still a bit to do though where the toilet will go.

No real reason to include the next photograph but I know that some of you enjoy seeing the views that we have from various parts of the house.

From the north-west corner of the First Floor veranda.

The headline for today’s edition is based on the 1980 single by The Pretenders which reached number one in the UK Singles Chart and number fourteen in the US Billboard Hot 100.