As I mentioned in the previous edition, I had an appointment at 08.00 hours at the Dental Center yesterday morning and had to catch the Caye Caulker Water Taxi 06.00 service to get to Belize City for this.

I (as long time readers will know) am always up early so getting ready for this early departure was not a problem. Catching the boat was made even easier because Rose got up to run me there in the golf cart (big cheer for Rose now!).

I was at the terminal by 05.50 hours and when they called for boarding I managed to belie my age by very adroitly (and swiftly) getting to near the front of the queue (my very English habit of queuing orderly has disappeared since moving to Belize. why? Hardly anybody respects a queue. And if you do you get left behind) and secured a seat near the boat ‘doorway’. On a dry day when the sea is calm this is a great spot for ‘catching’ the breeze. Not a great spot though if it is raining or the water is rough. Then you can get drenched.The trip over though was dry and calm. My seat selection worked!

Unless you really need to be in Belize City early in the morning though I would recommend that you avoid the first boat of the day. It gets packed and at times the person sitting next to you is so close it feels like it might be your Siamese twin. Or that’s how it felt for me at times. At least it was a female though.

The visit to the dentist identified (after cutting open my gum and stitching it up afterwards) that the implant hadn’t grafted. So, in around eight weeks time I am back there again for another attempt. Can’t wait!

On the way to catch the water taxi back to San Pedro I stopped off to get some painkillers (nine Enantyum tablets at a cost of BZ$ 49.50) and a panoramic X-Ray (at a cost of BZ$ 160) and having done so thought that I might walk to the terminal but after around fifteen minutes I concluded that when its summer in the city (Belize City that is) it is not the ideal time for walking so I caught a cab (taxi for non UK readers).

I failed to get to the terminal in time for the 10.30 hours service so rather than just sit around until the noon service I took a leisurely stroll to the Mirab store close to the Tourism Village.

The store has a wide range of goods available – from tableware to pots and pans, to bed linen, towels, gardening equipment, TVs, refrigerators, toys, perfume, shoes. The list goes on – but don’t expect price parity (or anything close to it) with your previous place of abode (in my case, London) because you won’t find it. Everything (well everything I looked at anyway) is more expensive. And in some cases the quality is not as good.

Irrespective of this, Rose and I know that we will need to make some of the purchases for our build in Ambergris Caye, Belize locally and for this reason after we left the BATSUB base last week we visited Mirab’s Furniture Gallery on the Western Highway.

The store had been recommended to us by Gary, a friend we have made since moving to Ambergris Caye, and we were hopeful of making selections and negotiating a discount with Mike and Gianna the owners. Regrettably at the time of our visit they were out of the country so we were unable to try out our negotiation skills. It didn’t stop us though from having a good look around and identifying some pieces that we might like to purchase. 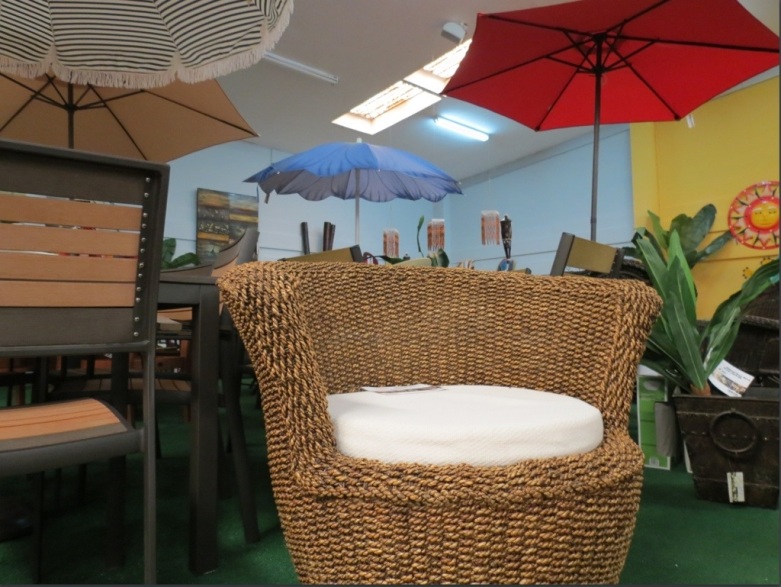 Potential (high) ‘easy’ chair for the First Floor veranda. Only problem is that they only have one left and Rose likes it too. Will I be chivalrous?

Could these be the dining room table and chairs we are looking for?

Still with time to spare before I caught the water taxi I lingered for a while on the swing bridge and saw the fishermen cleaning their boats after the morning’s fish. 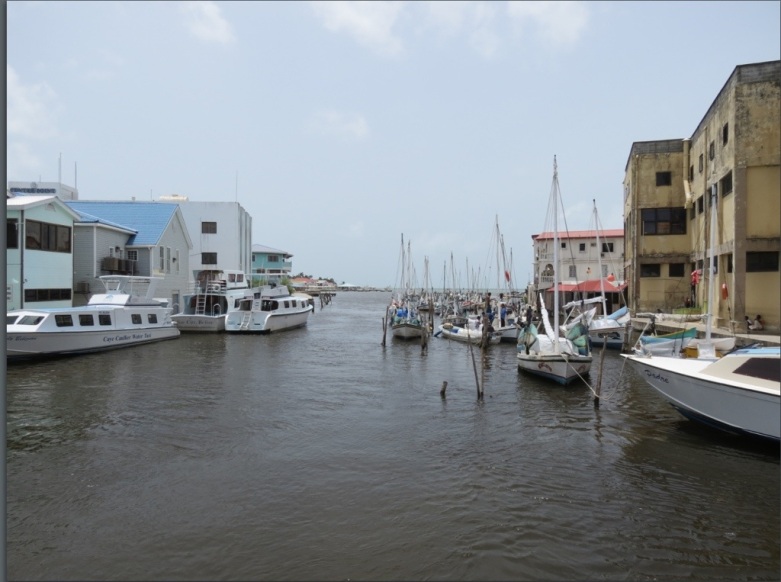 Looking out from the swing bridge. 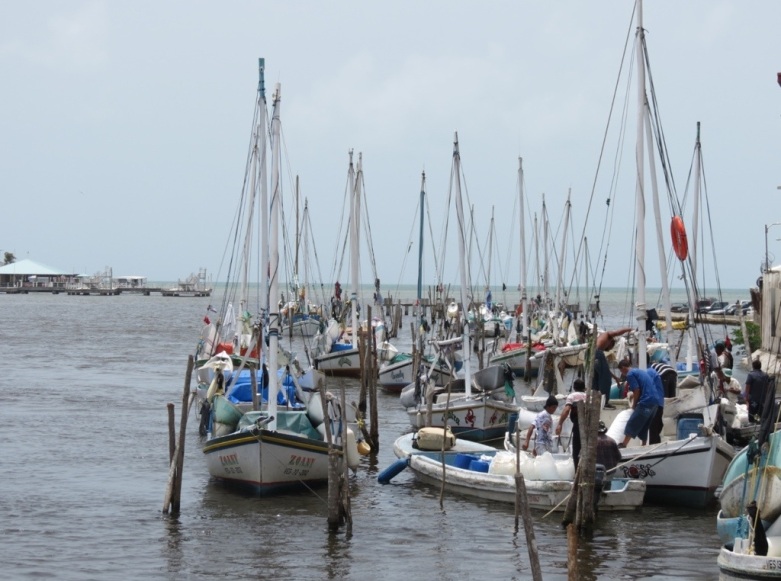 The ride back was a very pleasant one – the boat was relatively empty – and when the boat docked at San Pedro Rose was there waiting to take me back ‘home’. Once there I had a cup of coffee (needed liquid to take my medication) and a couple of rolls for lunch which I ate very slowly (and painfully). After taking care of one or two things on the Internet it was nearly 16.00 hours so we headed off to visit our build in Ambergris Caye, Belize.

When we pulled in to the lot we could see that the frame for the sliding window (door) was ‘in’ for the bedroom (Rose’s handicraft room) on the First Floor. 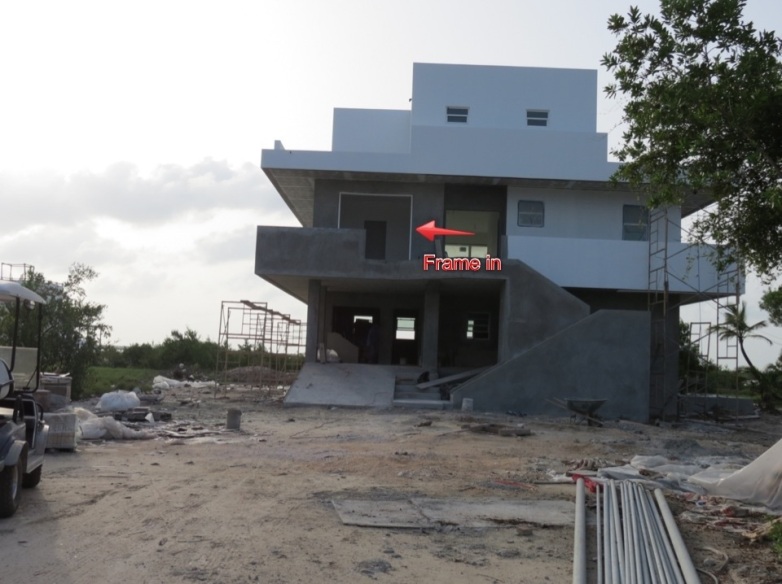 Up the stairs to the First Floor and we found Angel making the final (we hope) adjustments for the frame.

Once in the house we found Christopher just finishing laying the last of the floor tiles for the Utility Room.

Hearing a banging noise we headed out to the veranda (western/lagoon side) where we found a new member of Daniel Camal’s (our building contractor) team laying floor tiles. 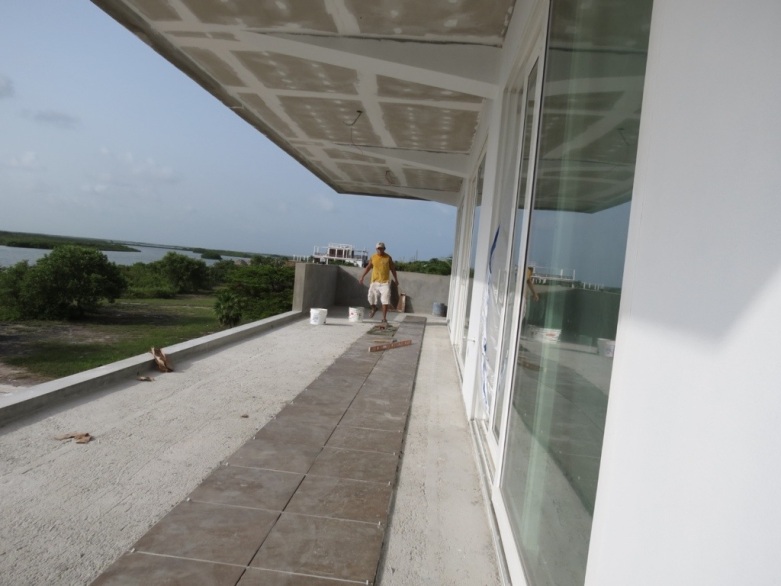 The Verde (stone) tile that we have chosen for the First Floor verandas ( and the entrance stairs).

Up on the Second Floor Ernesto was still working on my bathroom but was on the final stages. 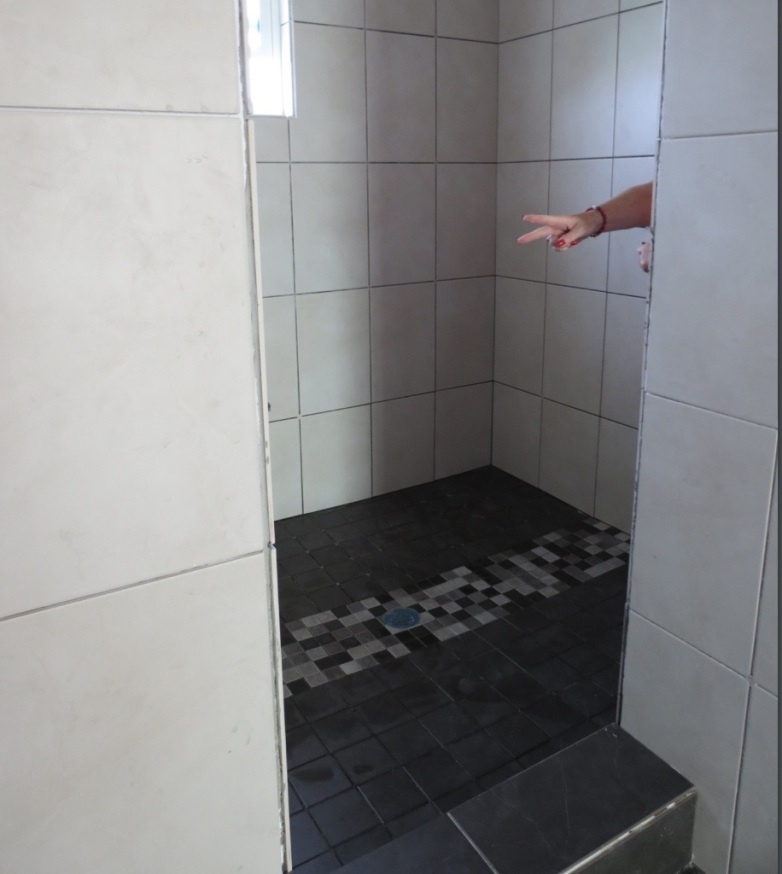 All floor and wall tiles laid.

With the tour of the upper floors finished we headed down to the Ground Floor self-contained apartment where we found Wilson (first day in the employment of Daniel) finishing off laying the floor tiles for the kitchen/living room. 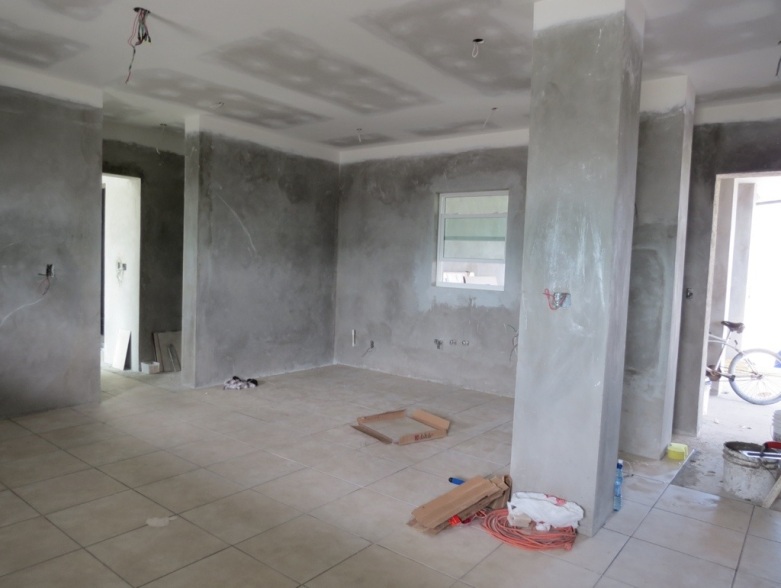 Just the section near the front door to go.

In to the larger of the two bedrooms and we found that the sliding window (door) had been fitted.

View from the inside.

View from the outside.

View from a distance.

On the way out we stopped to watch the welder at work.

Railings for the Second Floor western (lagoon) side coming along nicely.

Just as we were leaving we met Edgar who has come over from Spanish Lookout (this is where Daniel sourced the granite ) to cut and fit the granite for our kitchen and bathroom cabinets. He had erected his workbench close to the bodega.

Today’s headline is based on the 1966 single by The Lovin’ Spoonful (Rose still carries a torch for John Sebastian to this day) which reached number one in the US Billboard Hot 100 and number eight in the UK Singles Chart.