Up and out on the veranda yesterday morning just after 05.00 hours. With no photo shoot to take care of I just concentrated on The Times on-line. Don’t know why though because Arsenal still have not entered the transfer market.

I had intended to have breakfast at home but when Rose said she fancied going out (she rarely joins me for breakfast out) I got the opportunity of going to Estel’s two days running (not much running after breakfast though!).

As we were walking along the beach I was reminded of a rumour I had heard a week or so ago I don’t know how true it is but as Mark Twain said ” Never let the truth stand in the way of a good story …”.

I had been told that Exotic Caye Beach Resort is going to be pulled down in around eighteen months time and replaced with high end condos. Don’t know how true this is – I heard it through the grapevine. 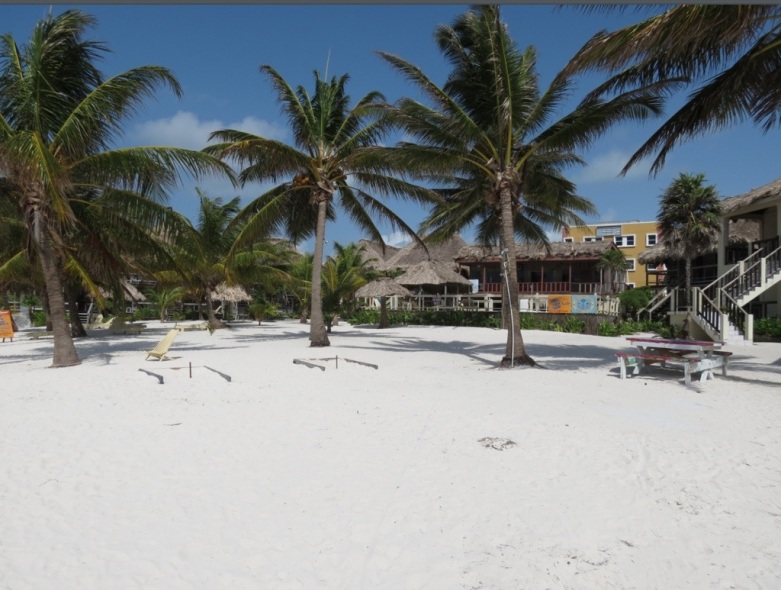 Exotic Caye Beach Resort as it looks now. What will it look like in two years time ? 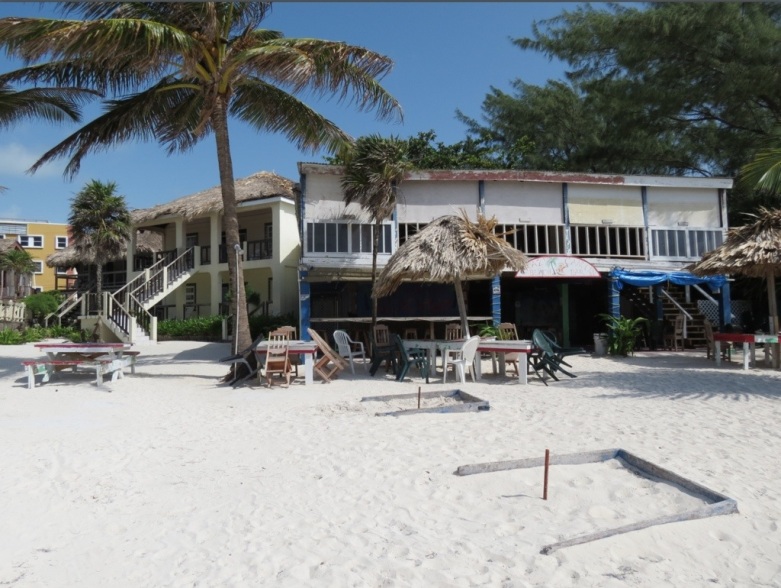 With our enjoyable breakfast finished Rose and I went to The Greenhouse in Pescador Drive to buy some ingredients for the prawn on puri that she was going to cook for dinner. Shopping over we took a leisurely walk back along the beach to the condo we are renting.

Once there I diced the tomatoes, onions and chillies and retreated to the beach with my book to leave Rose undisturbed to “work the magic”.

Following a light snack for lunch (after a breakfast at Estel’s I rarely need much more) we headed off to visit our build in Ambergris Caye, Belize. On the way there our attention was attracted by an arresting sight (terrible pun I know). A police vehicle had broken down at the junction of Coconut Drive. 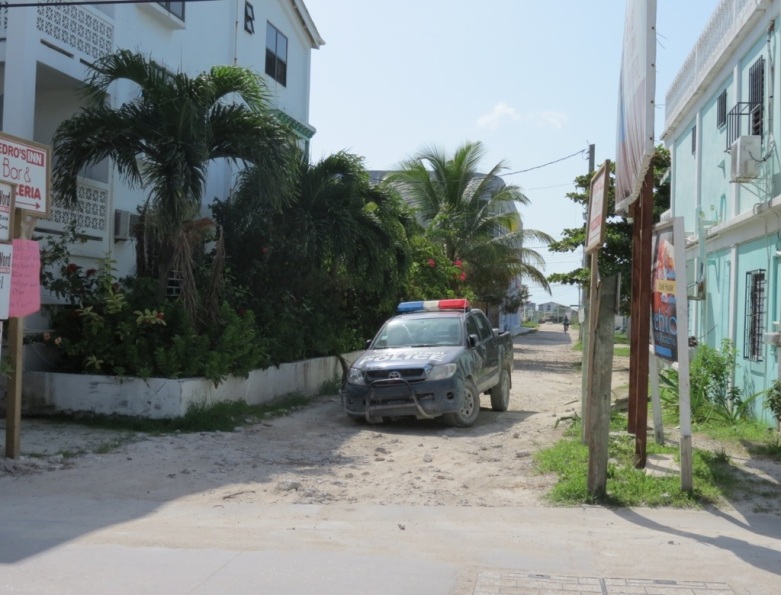 Now that’s what you call a road block!

Anyway enough of that. We got to the house around 15.00 hours and went straight in to the larger of the two bedrooms of the Ground Floor self-contained apartment where Rene was making tremendous progress on laying the floor tiles. 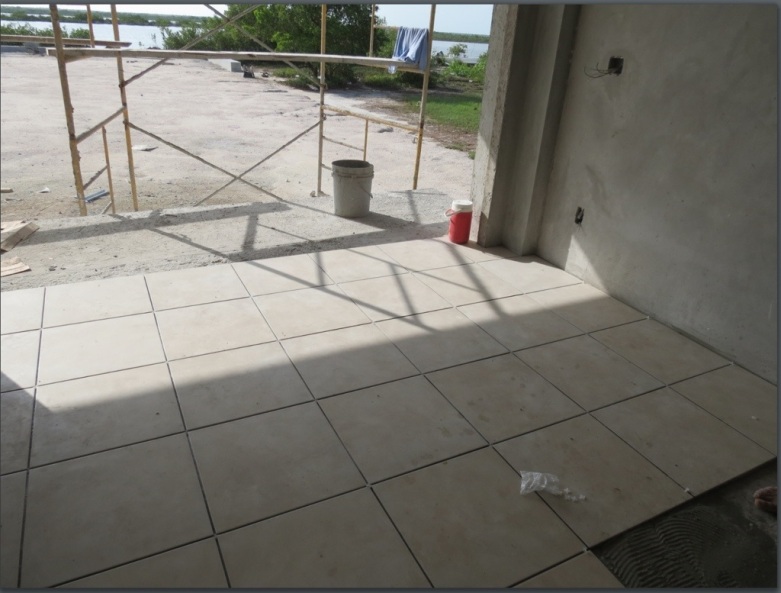 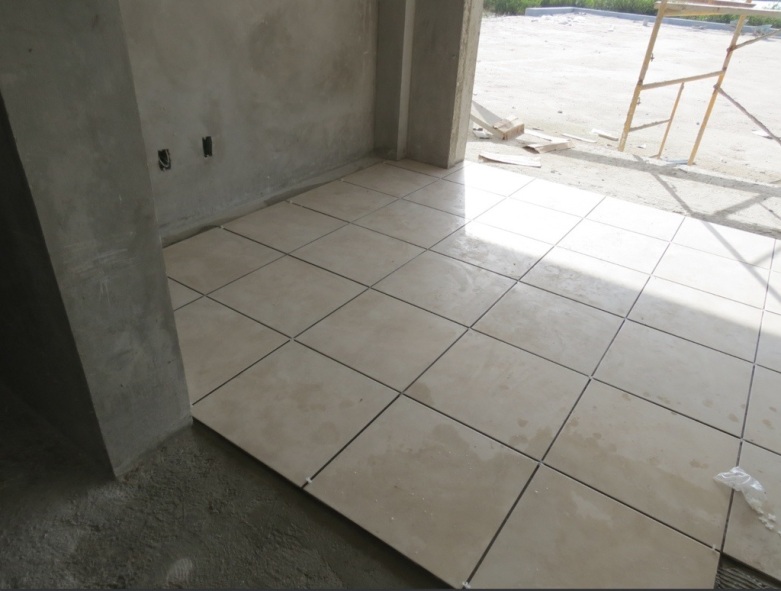 Up to the First Floor where we saw immediately that Christopher had laid all of the full tiles for the hallway. 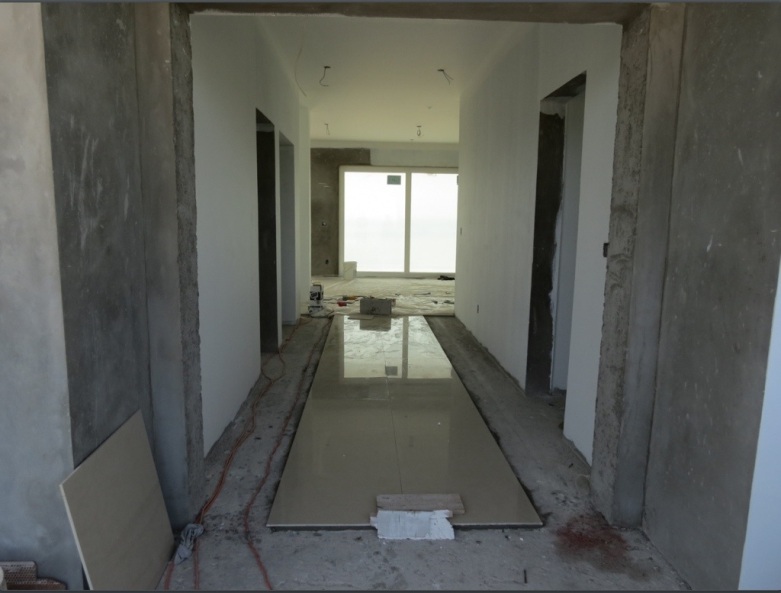 We found him just around the corner laying the final tiles for the kitchen area. 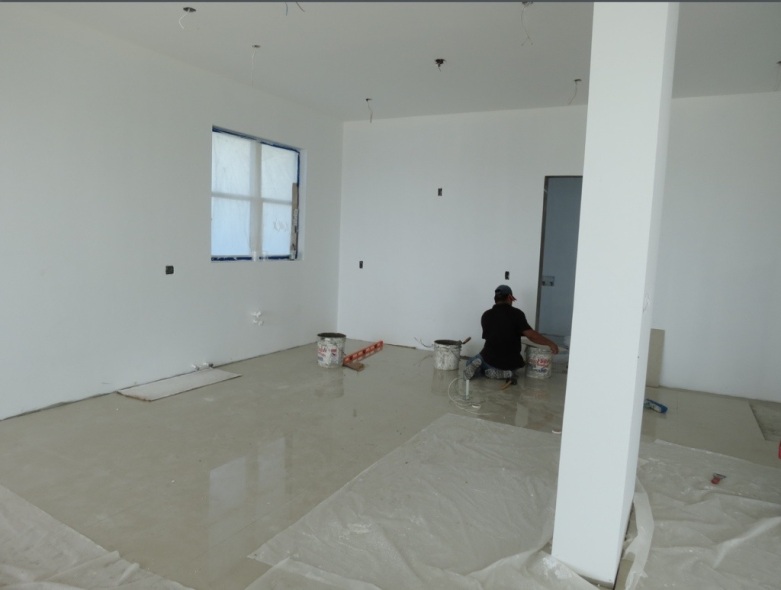 Out on the veranda were obvious signs that Rolando (the electrician/plumber) had been at work. 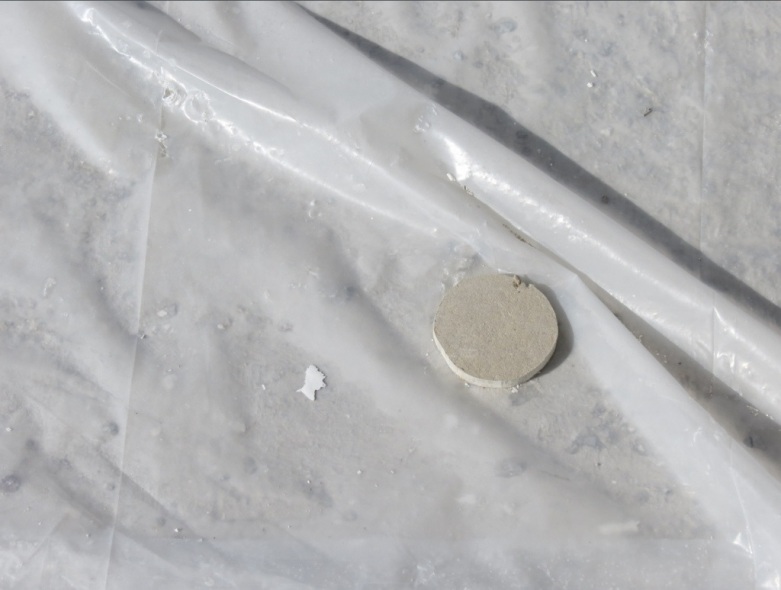 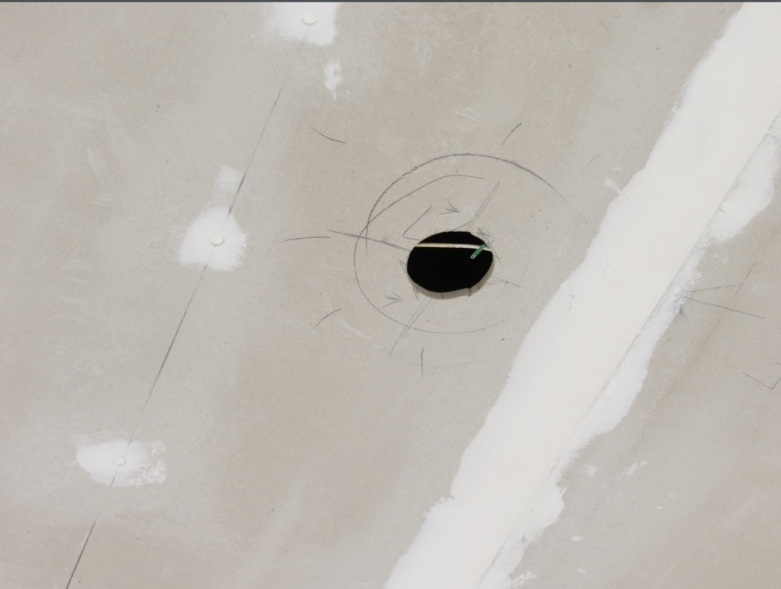 Hole for ceiling down light cut. 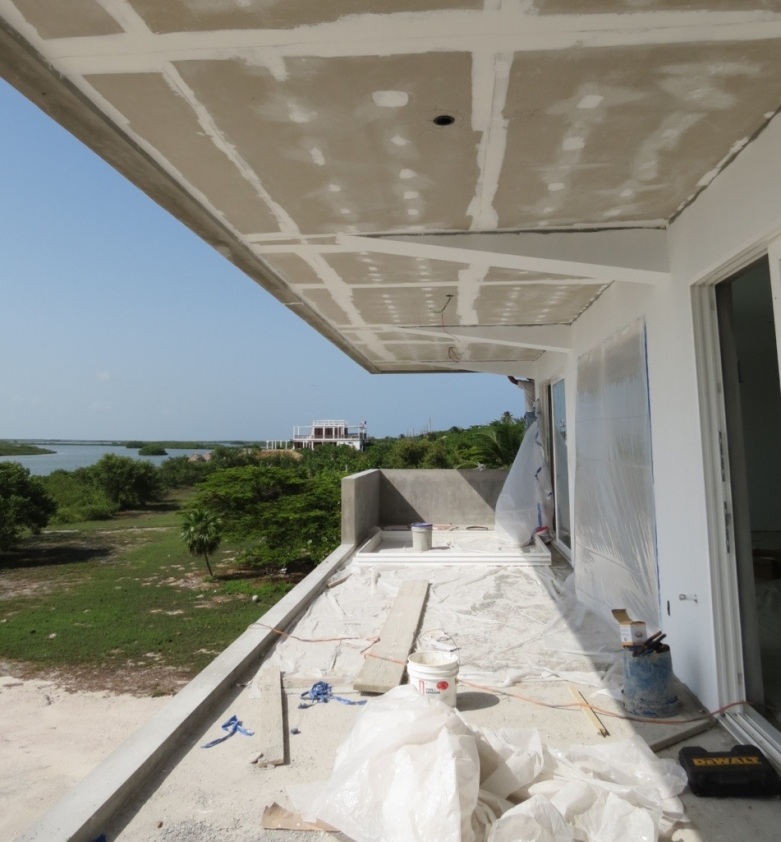 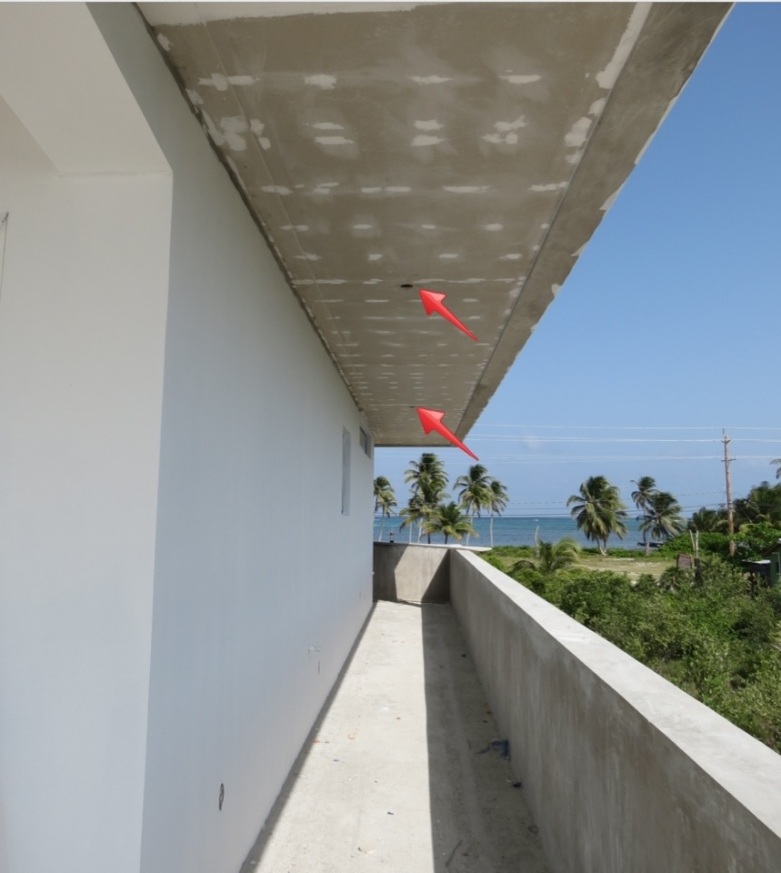 For the southern veranda.

José was out on the western veranda trying to fill the joints of the plycem. Apparently the heat build up (making the boards expand) is making this more difficult than usual. He told me that he will apply more filler today. 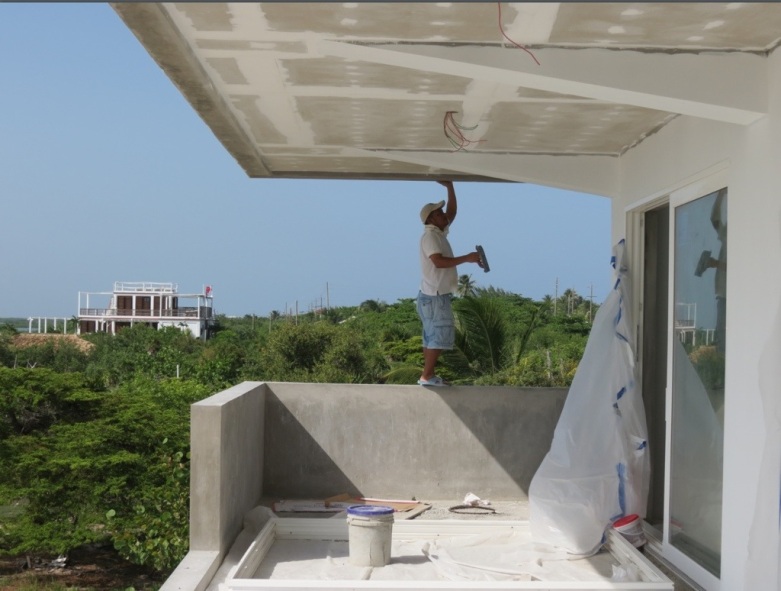 “Who needs a step ladder”.

Around the front (eastern side) of the house Angel and Alfredo were applying a coat of emulsion to the walls in the bedroom and bathroom (Rose’s handicraft room). 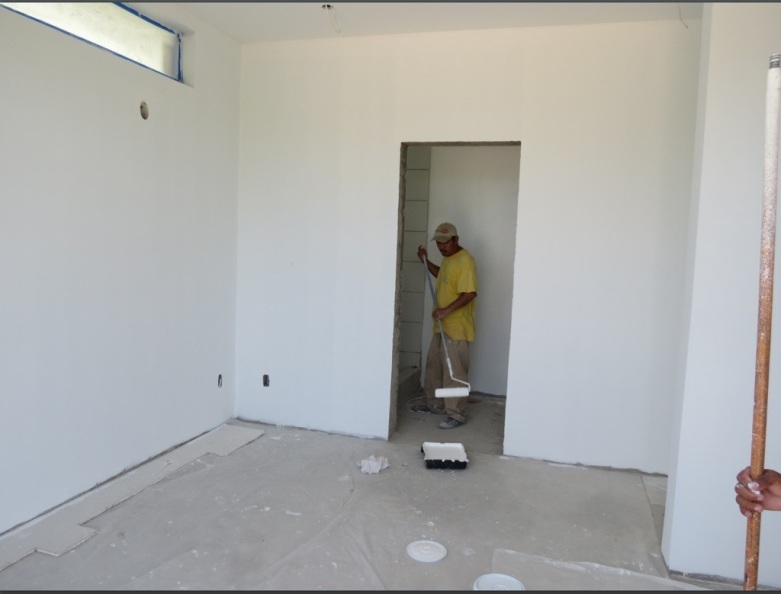 An unusually camera shy Alfredo out of shot.

Climbing up the scaffolding to the Second Floor we saw that Rolando had got there before us. 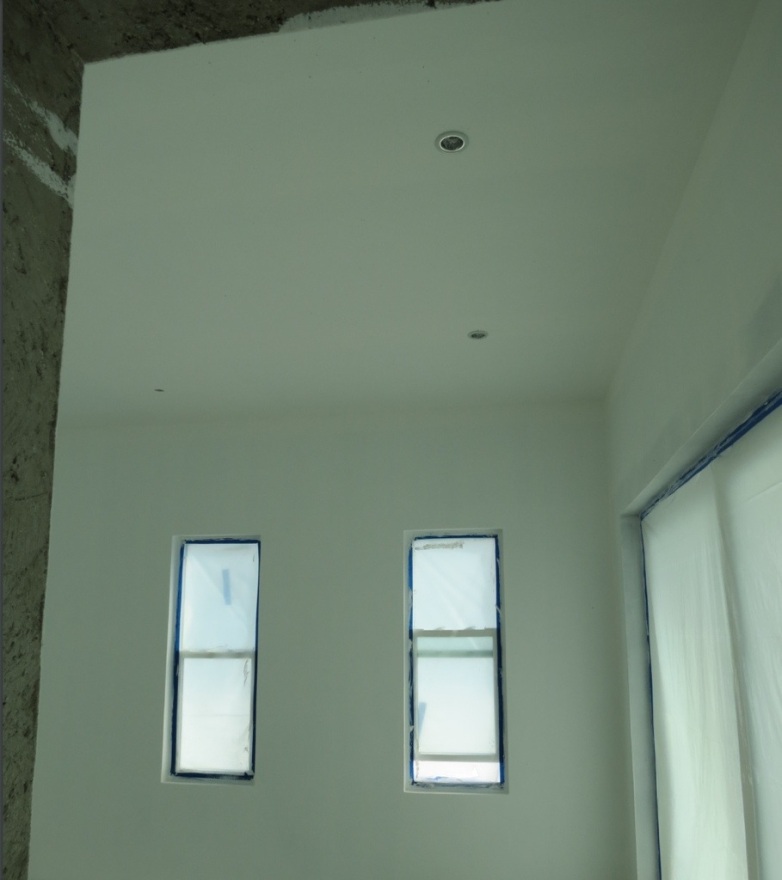 Lights fitted above the landing. 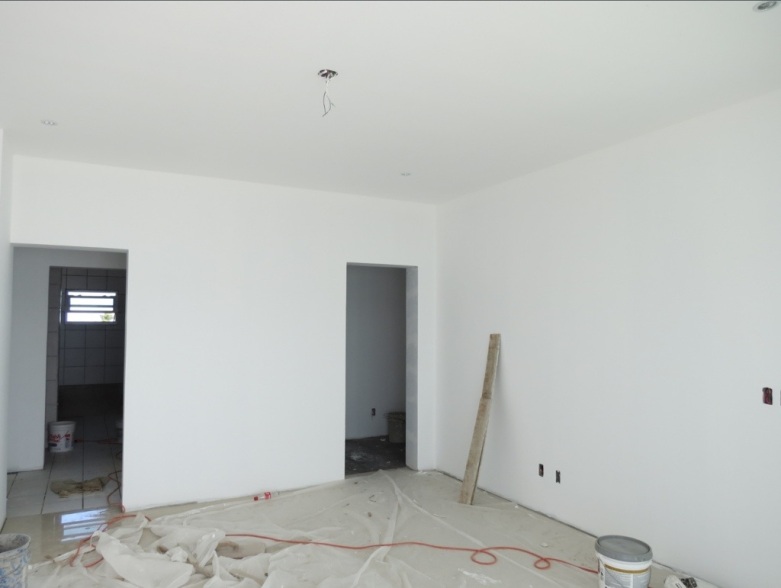 Lights for our bedroom fitted. Just the fan (with light) to go.

In my bathroom Ernesto was busy fixing tiles for the recessed shelving near the toilet in my bathroom. 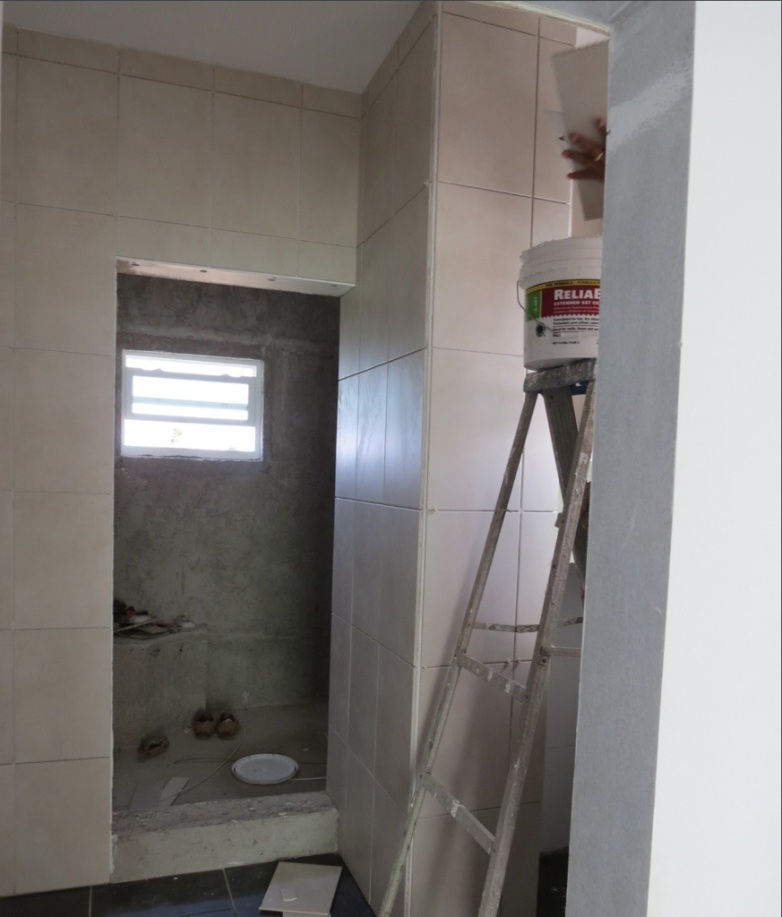 Lots of small jobs going on but as each one gets completed the house is starting to take shape.

On the way home we saw evidence of the redevelopment (beautification) of the Boca Del Rio Park. 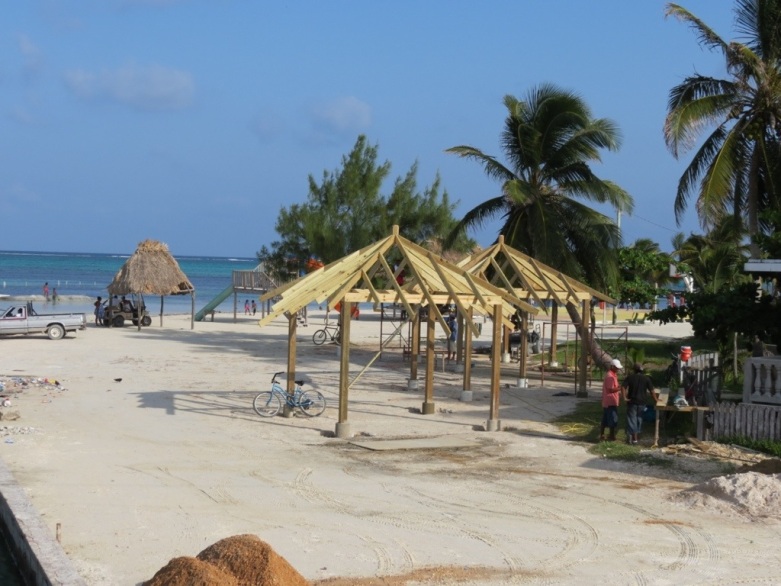 Framework for the new palapas going up. 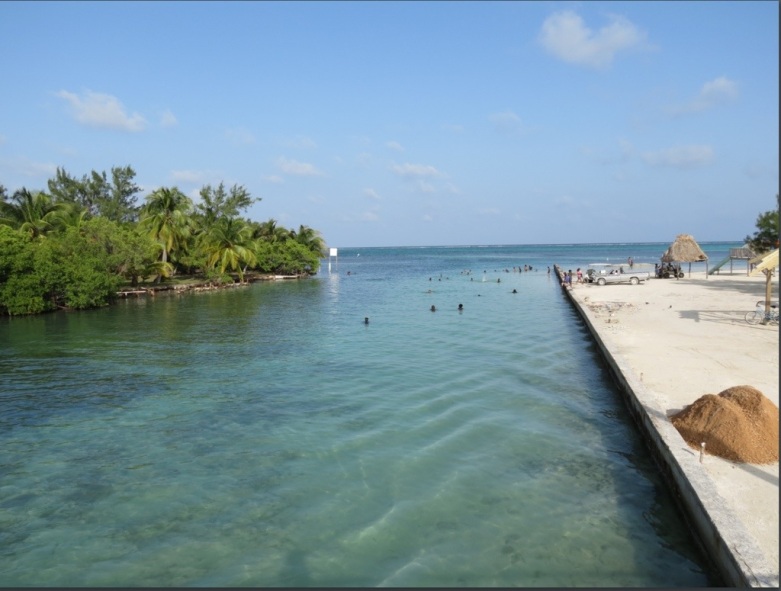 Didn’t stop the kids nearby enjoying their swim though.

The headline for today’s edition is based on the single released in 1968 by Marvin Gaye (it had been released previously by Gladys Knight & the Pips) which reached number one in both the US Billboard Hot 100 and the UK Singles Chart.