Just got to (actually I haven’t got to, but I do want to – and I can because this is my blog!) start off today’s edition by saying how good the fish cakes were. Could have eaten (at least) another one. Probably two at a stretch (of my stomach that is).

When Rose and I were at our build in Ambergris Caye, Belize on Thursday we spent some time re -measuring the widths of the areas for where the vanity units for the five bathrooms will be fitted. Armed with this information I was able on Friday to send an email to Fabro’s Glass Limited (based in Victoria Street, Belize City) detailing what we want. I now await a response advising what the cost will be and how long it will take to produce them. Hopefully they will be able to get them to us in just over a week.

With that out of the way I took the golf cart to Captain Shark’s. The reason for this return visit is that since collecting it after its service last week there have been creaking/groaning noises emanating from the front (note my obviously mechanically knowledgable description (sic)) whenever turning the steering wheel. At times it has sounded as if the axel was going to snap.

After dropping off the cart I took a leisurely walk along the beach back to the condo we are renting -sure beats taking the car for a service in the UK- and got there shortly after 10.30 hours when I grabbed my book and headed with it to the beach for some ‘quality time’.

Regrettably I did not get a call from Captain Shark’s to let me know the ‘cart was ready until around 16.15 hours which put the kibosh on any visit by Rose and I to our build in Ambergris Caye, Belize. As to the cart, well apparently the spacers for the king pins were incorrectly set and there was a problem with the brakes. Both had been fixed and the noise had disappeared. Hooray.

Yesterday morning I enjoyed couch time watching The Open Championship and was really pleased at the end of play to see Lee Westwood at the top of the Leaderboard. With the day’s play over I had a light lunch and then Rose and I set off (in our now creak-free ‘cart) for our build in Ambergris Caye, Belize.

As we approached our lot we were pleasantly surprised to see that the two depressions in the road in front of our lot had been filled with hardcore. Had Mayor “Danny” Guerrero been up there and decided to do something to make the entrance and exit to/from our new home smoother? 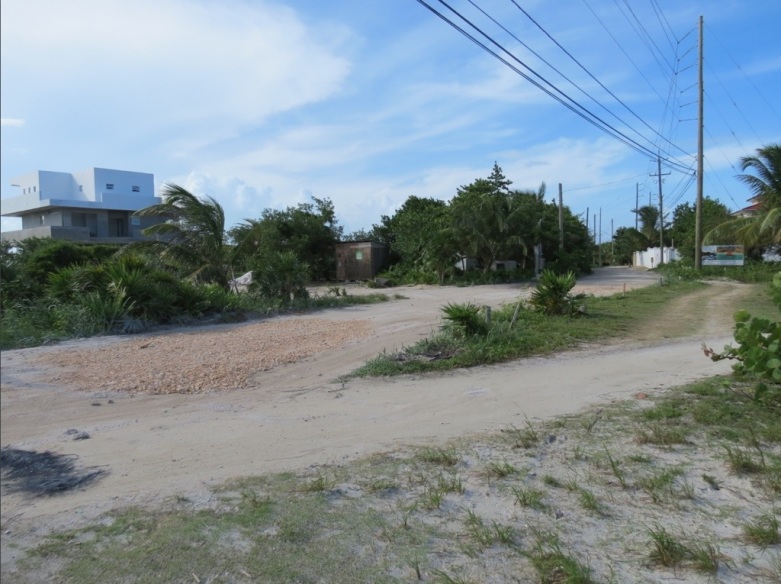 Whether Mayor “Danny” had a hand it to not it definitely made for a less bumpy ride in to our property. So, thank you whoever is responsible.

Once we had parked the ‘cart we took a walk around at ground level and saw that some of the new guys that Daniel Camal, our building contractor, has drafted in had removed some of the concrete floor in the ‘master’ bedroom in the Ground Floor self-contained apartment. Obviously the mix had been wrong. 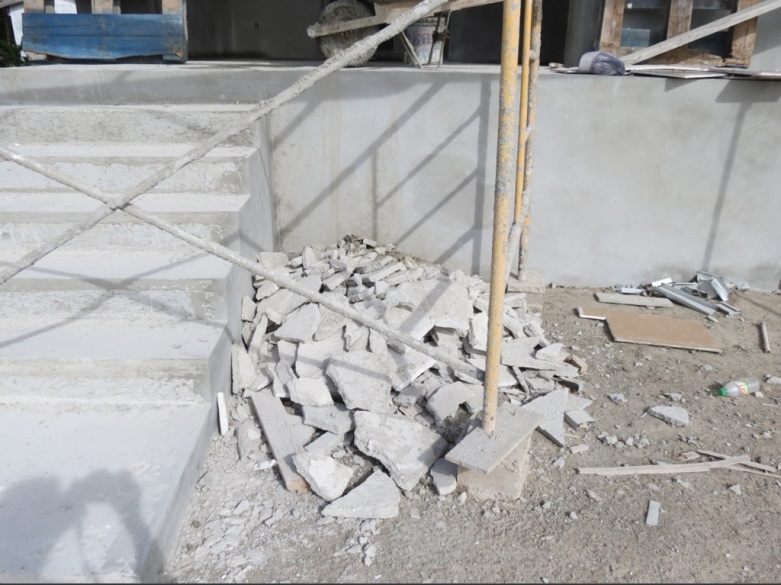 Not good enough for the floor but good landfill! 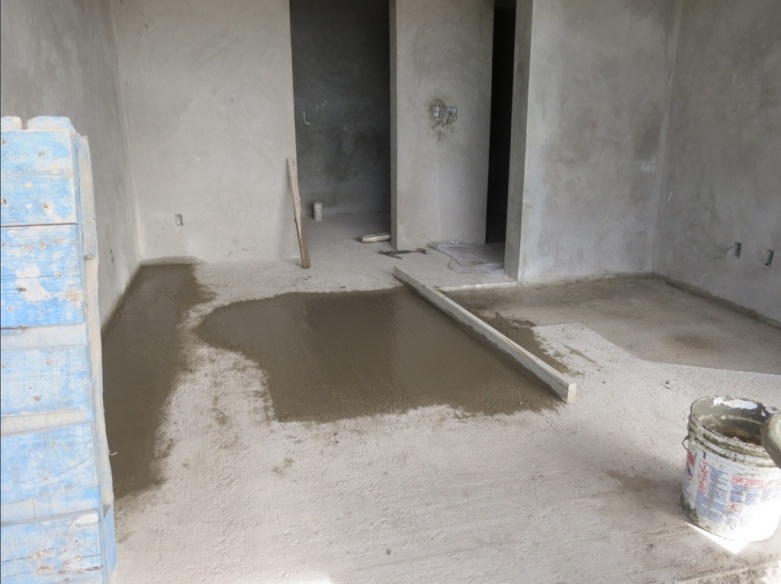 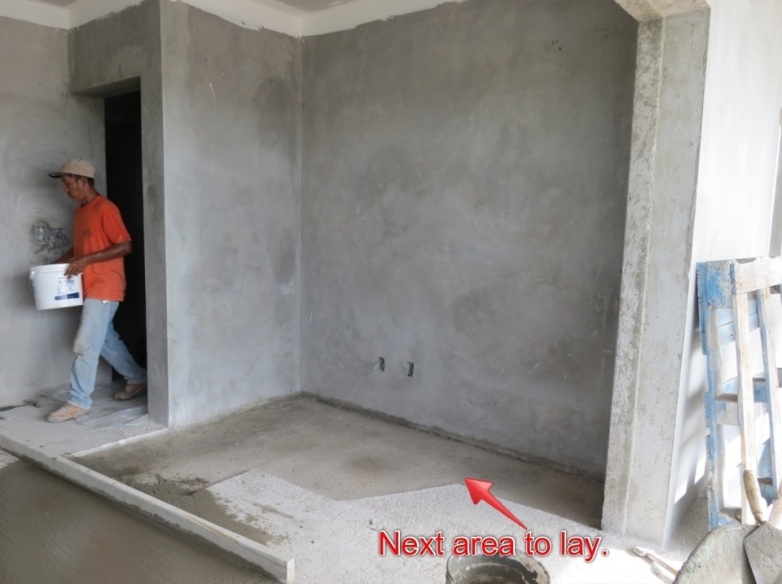 In the Store Room/Garage we saw that the lights had arrived and were stored ready for installing.

Out front of the house the guys had ‘knocked up’ the last mix of cement for the day for the ‘master’ bedroom of the Ground Floor self-contained apartment. 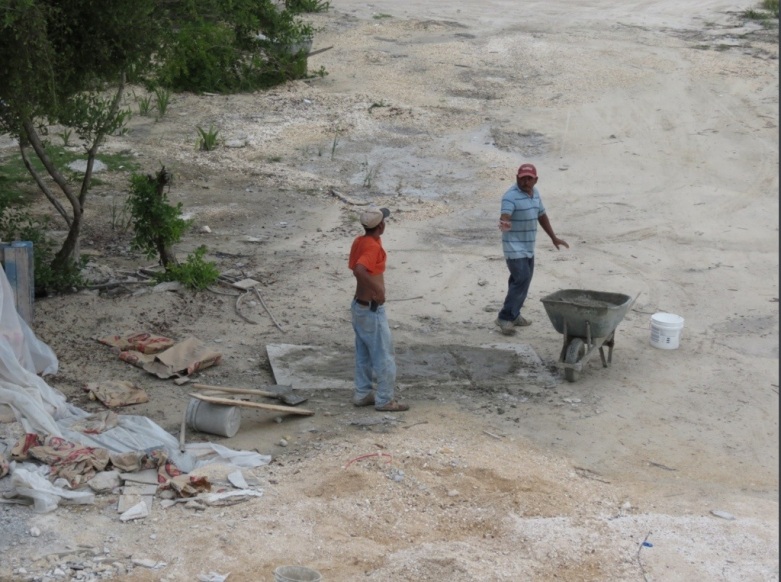 Cement loaded in to the wheelbarrow.

Up the stairs and in to the First Floor and we found that work was continuing in the bathroom for the bedroom (Rose’s handicraft room). 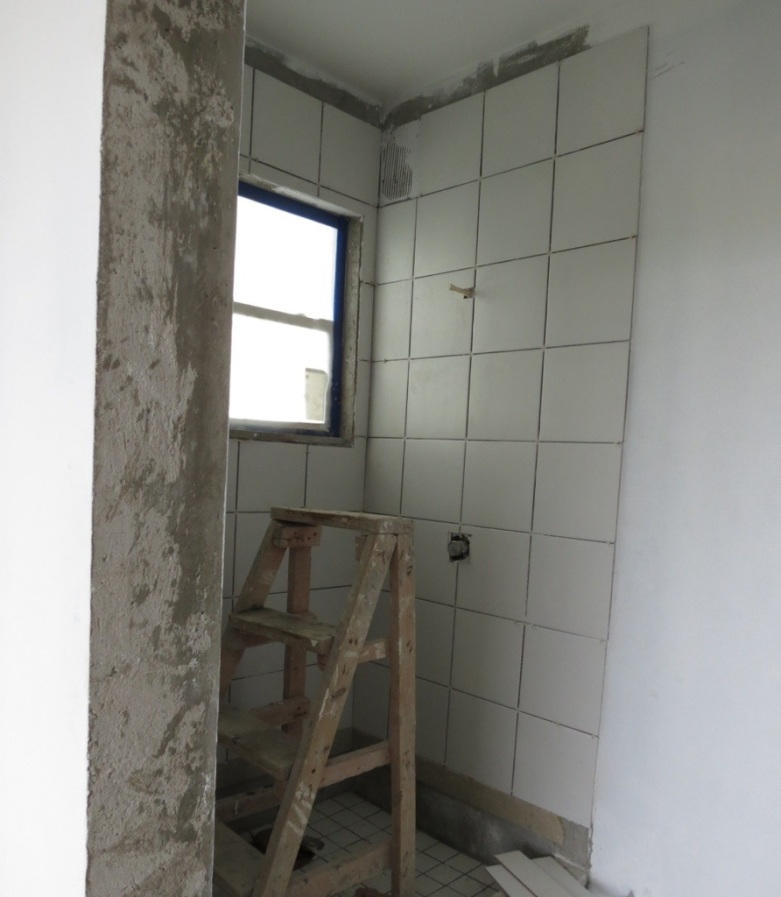 Out on the western (lagoon) side veranda Martin was “making good” the cement around the middle sliding window (door).

And inside the house Christopher was continuing to lay the tiles for the living/dining/kitchen area.

A close-up of the tiles.

Clambering up the scaffolding (oh I do look forward to the day when the staircase is in!) I was met by what looked like extremely steamy windows but as I reached the top could see that they were covered with plastic sheeting. Walking outside onto the veranda we could see why. The western (lagoon side) wall had received its first coat of masonry sealant and the windows had been sheeted-up to protect them. 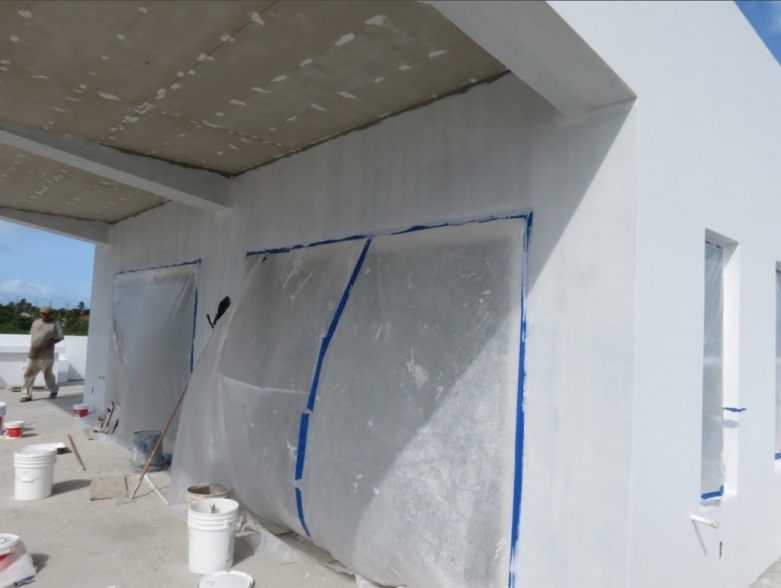 View from the back garden.

And in the north-west corner Angel and Alfredo were applying the first coat of emulsion for the table.

The headline (OK its a tenuous link) is based on the 1990 single by Tina Turner which reached number thirty-nine in the US Billboard Hot 100 and number thirteen in the UK Singles Chart.