It was a very grey day on Ambergris Caye On Saturday. An overcast sky. Sounds of thunder. Occasional flashes of lightning. Then the rain. And did it rain and just as I was on my way back from town too!

I had the windscreen (windshield for non UK readers) up. I was wearing a rainproof jacket. But when the rain came down just as I approached Denny’s Donuts & Truck Stop in Coconut Drive I got drenched. And I mean DRENCHED. By the time I got home I felt and looked like a drowned rat (“friends”(or anyone else for that matter) in the UK please do not see this as an invitation to comment!).

After I had changed my clothes Rose and I had lunch and waited for the weather to hopefully clear so that we could go visit our build in Ambergris Caye, Belize but by 2.45 pm it had shown no sign of abating so we decided to set off anyway.

Rainwear on we stopped off first at Pedro’s Hotel to collect Dave, our friend who is a serving member BATSUB) who had come to Ambergris Caye for the weekend, so that he could see what progress had been made since his last visit.

We were able to provide Dave with a poncho (courtesy of Larry, a reader of this blog) to keep him dry on the back seat of the ‘cart. With Dave suitably attired we set off and got to our build in Ambergris Caye, Belize around 3.15 pm.

We headed straight in to the Ground Floor self-contained apartment to find that the guys had made a great start on laying the final coat of cement for the floor in the kitchen/living room area. 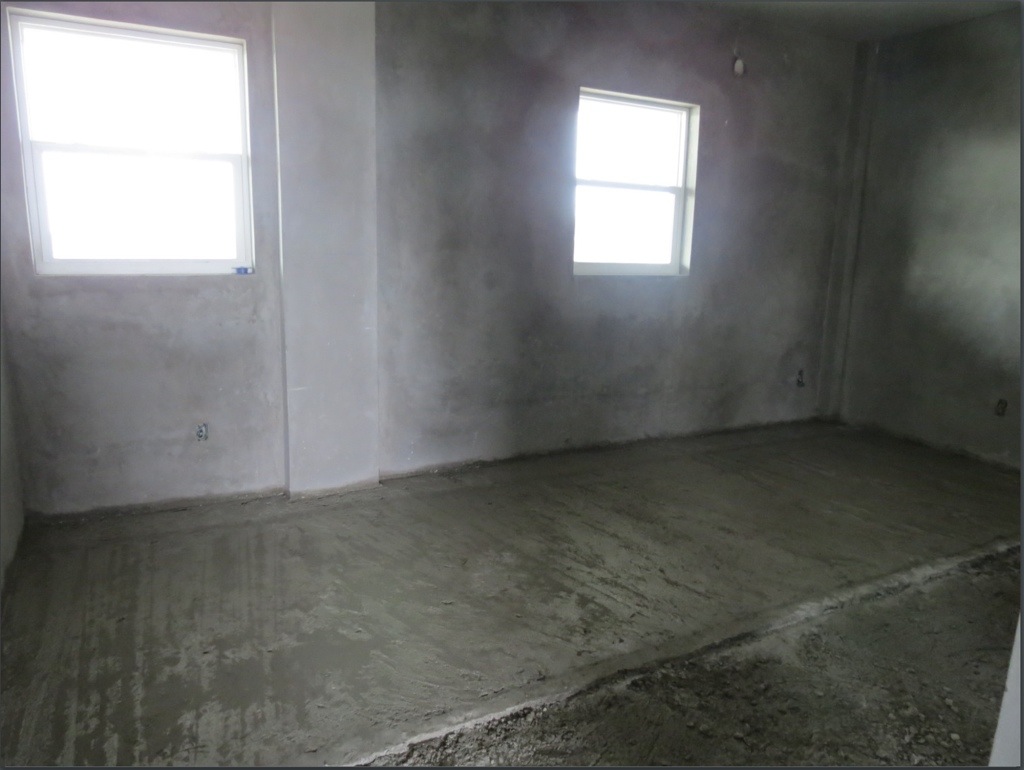 Western (living room area) side of the room.

Eastern (kitchen room area) side of the room. 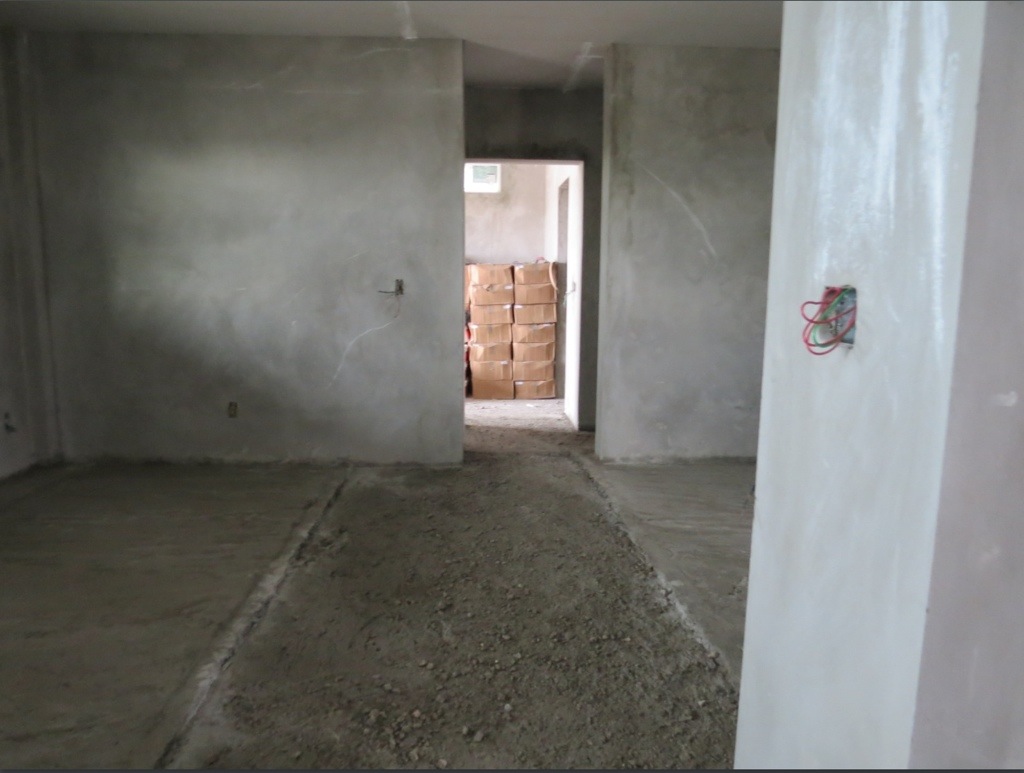 Section in the middle of the room to do.

The guys had also laid the cement for the floor for the hallway between the two bedrooms.

With the floor for the hallway down we were able to access the smaller of the two bedrooms and found that they had finished the recessed shelving in the en-suite.

Plenty of space for soap and shampoo!

When leaving the apartment we saw that the guys were making good use of the completed Pump Room as a dry storage area.

Tile adhesive stored in the dry.

Once up the stairs we saw Martin applying the finishing coat of cement to the section of wall above the entrance having already finished the section inside the house. 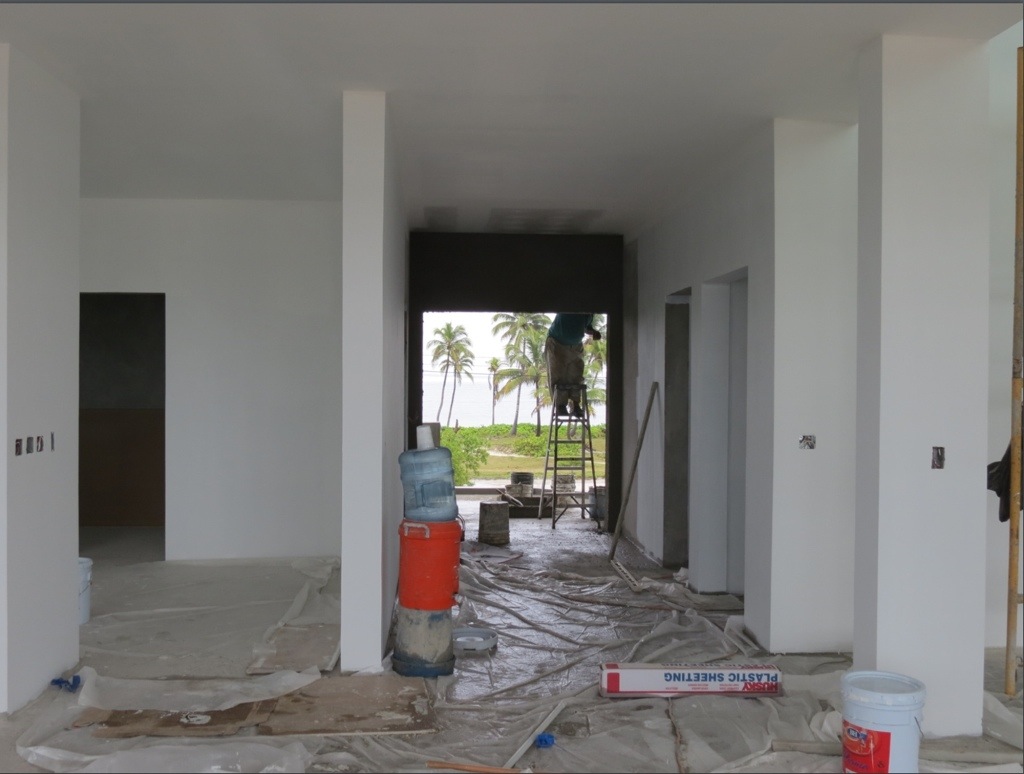 Ready for a coat of masonry sealant.

Inside the house Alfredo was ‘cutting in’ with masonry sealant for the base of the walls in the kitchen area.

Wanting to show Dave the work that had been done on our bedroom and bathrooms (and the sliding windows (doors)) Rose looked dismayed when she saw that the scaffolding had been moved. The new positioning left too big a gap between the scaffold and the Second Floor landing for Rose to safely traverse. Seeing Alfredo and Alfonso moving towards us I was able to say ” Don’t worry baby” (OK, I didn’t really say this but I need a link for the headline!) as the guys moved the scaffolding closer.

Having given Dave a tour of the Second Floor we departed from our build in Ambergris Caye, Belize and went straight to Carlo and Ernie’s Runway Bar & Grill to watch Belize play Costa Rica in the group match for the CONCACAF Gold Cup.

When we got there the place was already filling up. 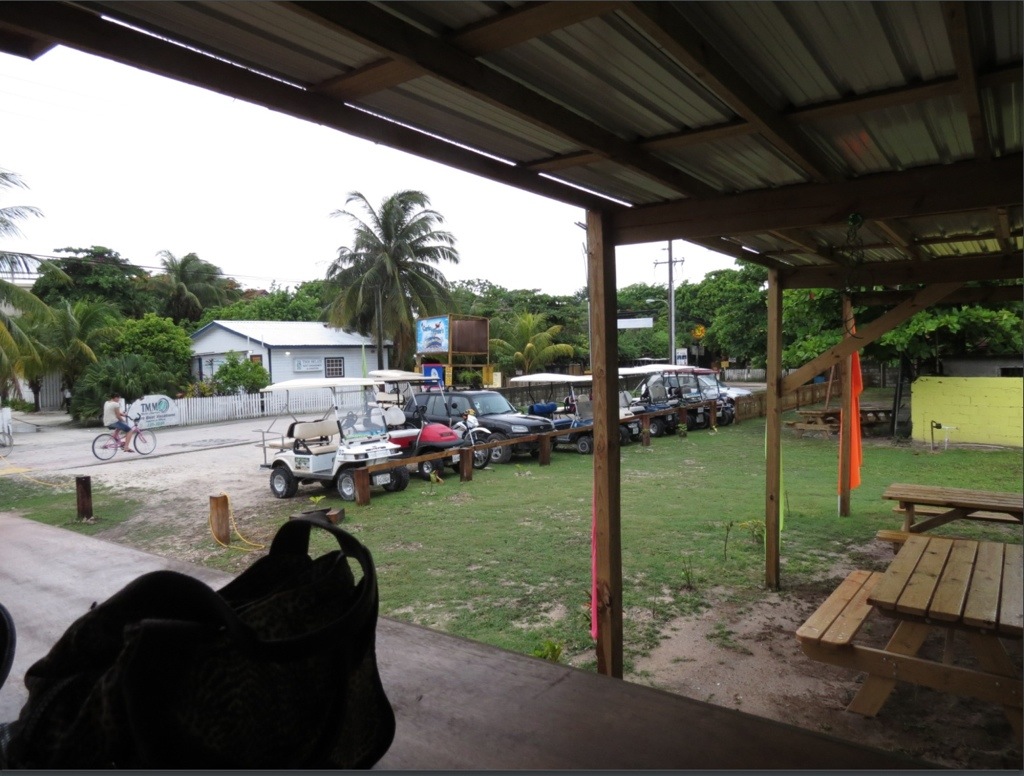 With the game underway all eyes were on one of the four screens in the bar and the noise level rose whenever a Belize player got the ball.

Unfortunately the Belize players, although putting up a really spirited performance, were not able to hold out for a draw and lost one nil to an own goal by Dalton Eiley. A great effort though and one which was appreciated by everyone in the bar.

Apologies for the late publication of this edition but we have been suffering problems with DSL (apparently equipment has been damaged by the rain). Hopefully BTL will resolve this today. PLEASE.