Up ridiculously early yesterday morning at 3.40 am. Must have dozed too much the previous day!

After reading the pages and pages of coverage for Andy Murray’s triumph at Wimbledon in The Times (online version) I checked my In Box for emails and was disappointed, but not overly surprised, to find that the banks I use in the UK and Jersey will not act upon the change of address (for security reasons) detail I sent them last week. So I now have to write letters to both. Oh well, it will give me something to do!

Feeling a little in need of sustenance I showered, shaved, dressed and grabbed the iPad and headed off to Estel’s for a well deserved breakfast ( I don’t set particularly hard targets for myself so they are easy to achieve!). For example just waking up in the morning is my first target of the day. See what I mean.

Anyway, breakfast was good- as it always is – and I got time to do a little Googling to see what colour stains are available for cement for our build in Ambergris Cate, Belize. I think I may have mentioned previously that although we are having the entrance stairs and the First Floor veranda tiled, the Ground Floor ‘open’ area and the Second Floor veranda and roof terrace will have a cement finish. I came up with a few colours but the question now is whether they are readily available in Belize. My next task (with the invaluable help of Daniel Camal, our building contractor, of course) is to find if they are.

When I got back to the condo we are renting Rose and I took care of some household chores which took a couple of hours and headed off to visit our build in Ambergris Caye, Belize around 2 pm.

When we got there we saw straight away that some of the sliding windows (doors) were ‘missing’ from the Store Room/Garage. So we rushed in to the Ground Floor self-contained apartment to see if one had been fitted for the ‘master’ bedroom. It hadn’t! So we went straight up to the First Floor. None (there are three to be fitted) there either. Realising that the action must be up on the Second Floor we ascended via the scaffolding in double quick time.

Once up there we had to carefully avoid the tiles that were being laid to step out on to the veranda to get a good look at of one of the PGT Winguard sliding windows (doors) fitted. Or was it?

We hadn’t been up there long when the guys started to remove it. They had put the wrong one in first. 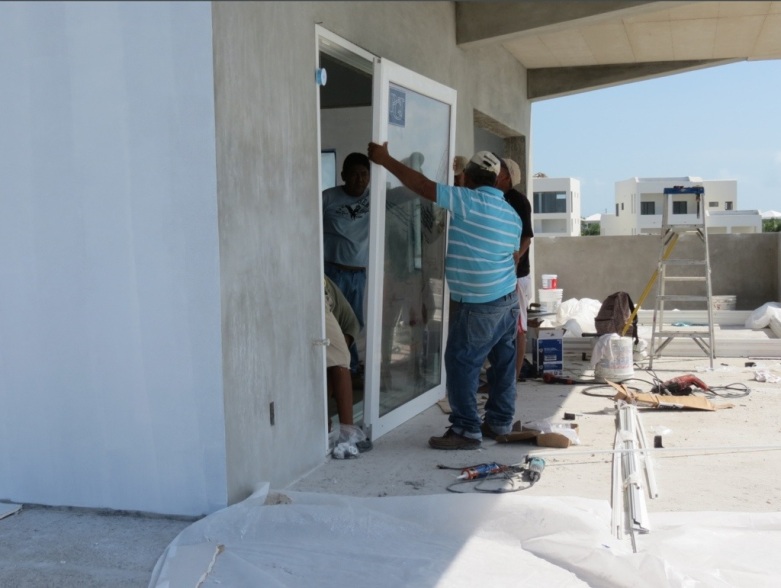 Nicholas then screwed in the runner and they were ready to put in the correct window (door). 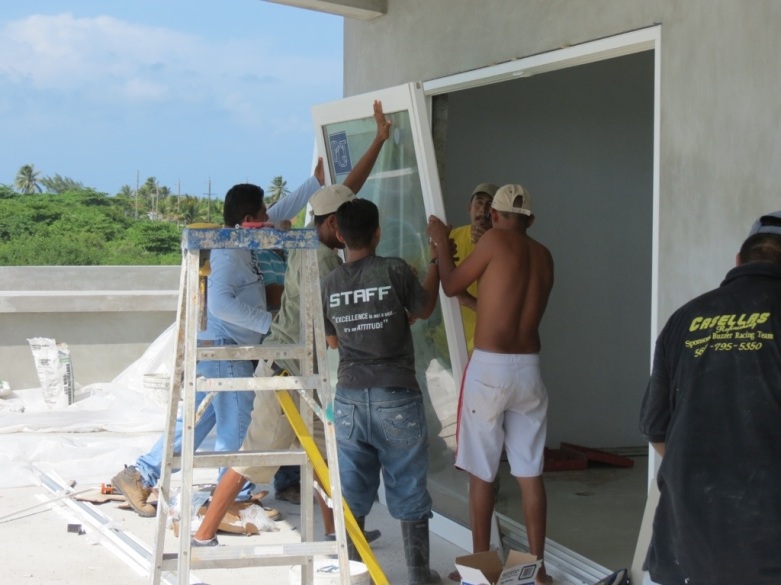 With the first one in they very quickly set about getting the second one in and did so fairly quickly. Before they did so though Angel cut the window strip

and Nicholas ‘snapped’ it in place.

And then they were ready to install the second window (door). 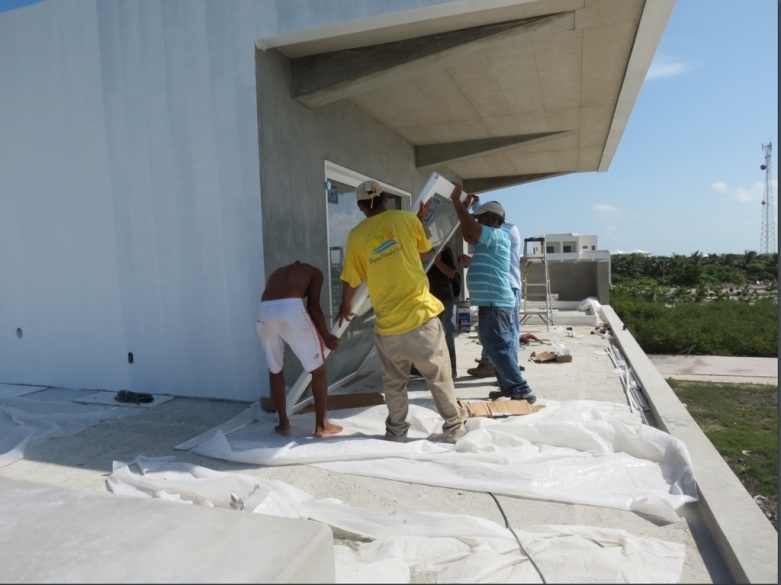 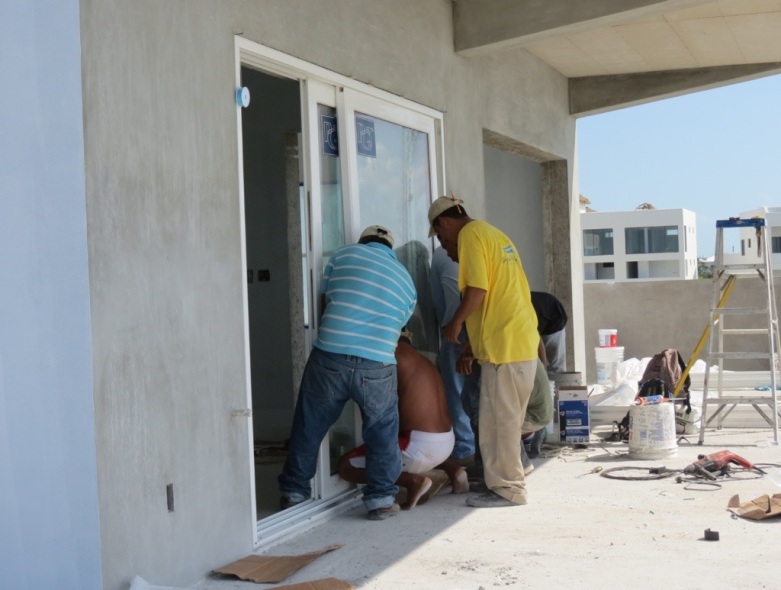 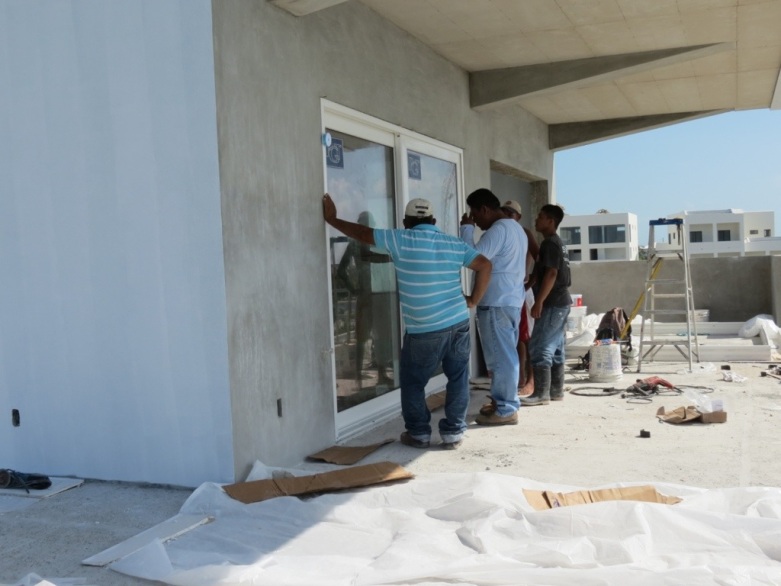 Nicholas immediately started filling in around the window frame with silicone whilst some of the guys stared to read the instructions to see how the handles and locks have to be fitted.

Nicholas at work with the silicone gun.

Alfredo, having helped to lift the windows (doors) in to position, resumed applying the second coat of masonry sealant to the northern wall.

Oh, and down below in the back garden the guys were applying the penultimate coat of cement to the water facing side of the sea wall.

The long walk with water.

Knocking the cement up.

And spread it on the wall.

Around the corner on the southern side Rafael (aka The Frog) had started applying the first coat of matt emulsion. 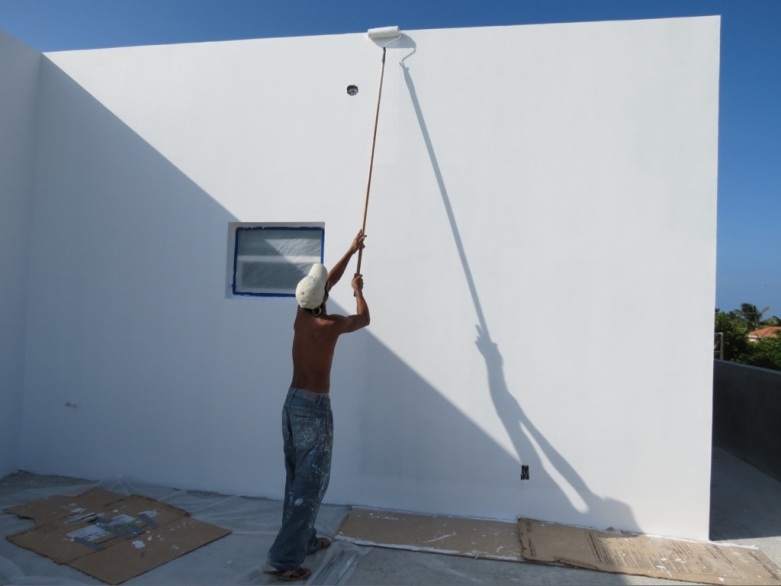 And down below at ground level Martin was applying the finishing coat to the western wall of the septic tank. 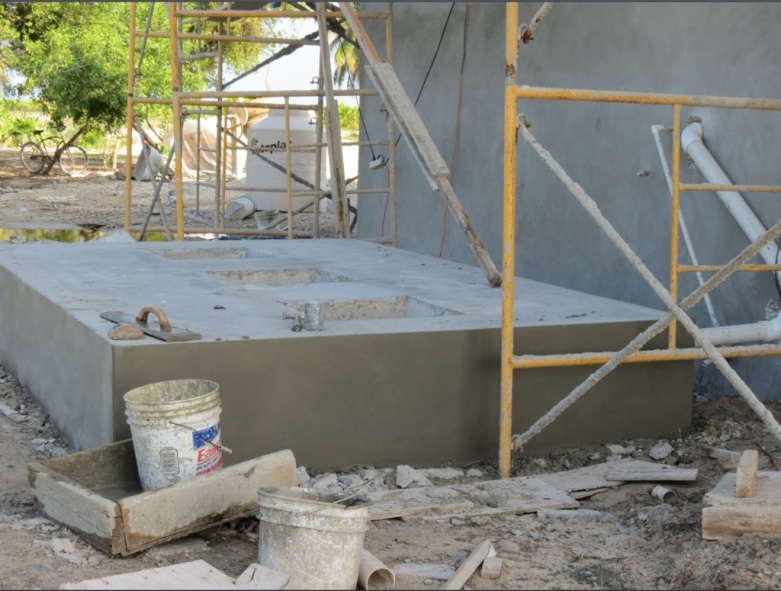 Before we left our build in Ambergris Caye, Belize we went to the back garden to see how the windows (doors) looked from down there.

Rose and I left there thinking it’s getting better all the time!