Yesterday, as I mentioned in the previous edition, we experienced a very wet morning on the island. Streets, and even those that are paved, for a while could not cope with the extremely heavy rain and some were flooded. As the rain eased off though the water dispersed and the roads became more easily navigable.

Apparently the flooding was caused by drains that had been clogged by sand from the previous tropical depression. 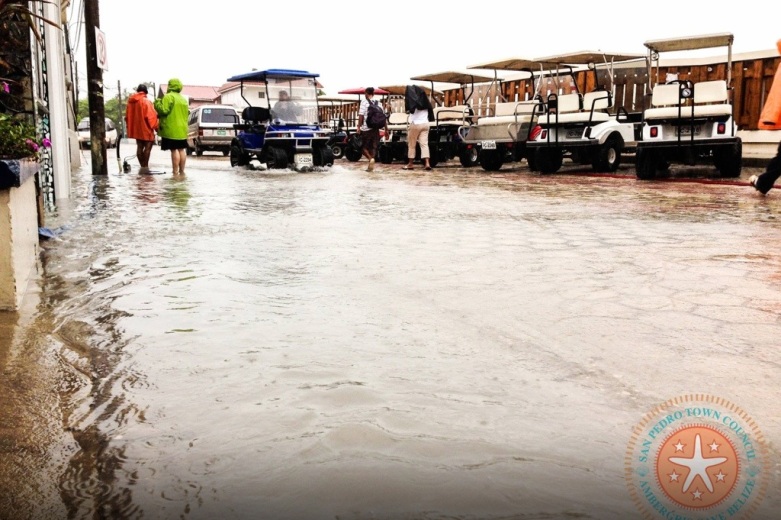 With no drains on the land around our build in Ambergris Caye, Belize we knew that there would be areas where it was heavily underwater and that was exactly the case when we got there around 3.30 pm.

Front of the house on the north-eastern side.

It’s not good to see so much of our garden underwater but it is letting us know where we need to direct our efforts (and money) for additional landfill.

Having parked the ‘cart in a dry(ish) area we went straight to the Ground Floor self-contained apartment where we found the brothers, Nicholas and Angel, fixing ceiling boards in the living/dining/kitchen area. 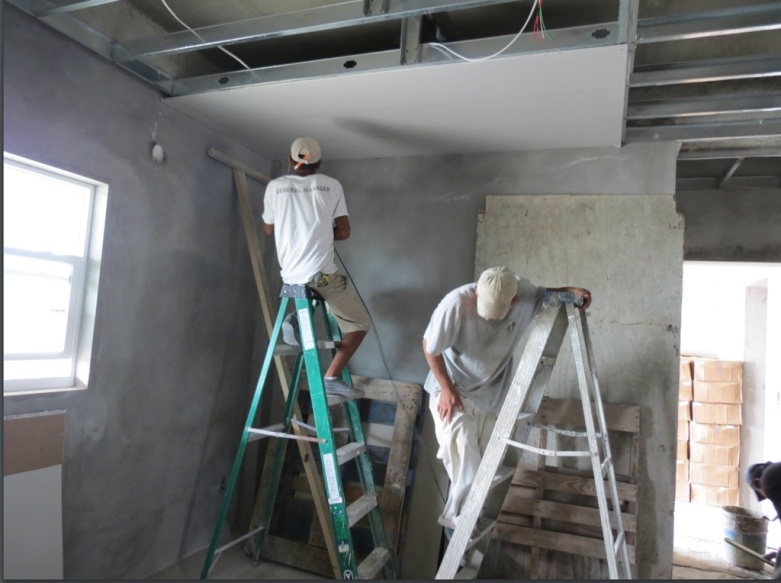 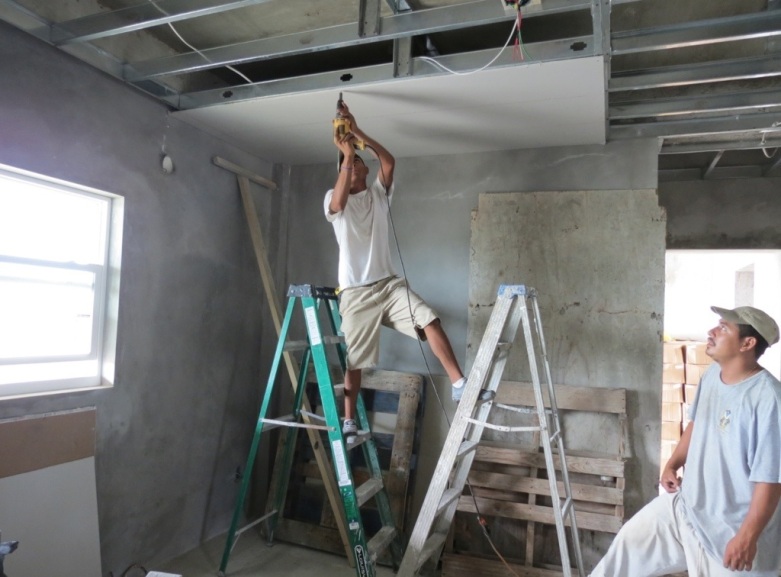 Nicholas with the drill whilst Angel goes to get the next board.

Through to the bedrooms and we saw that the lines had been struck to lay the final course of cement for the floors. 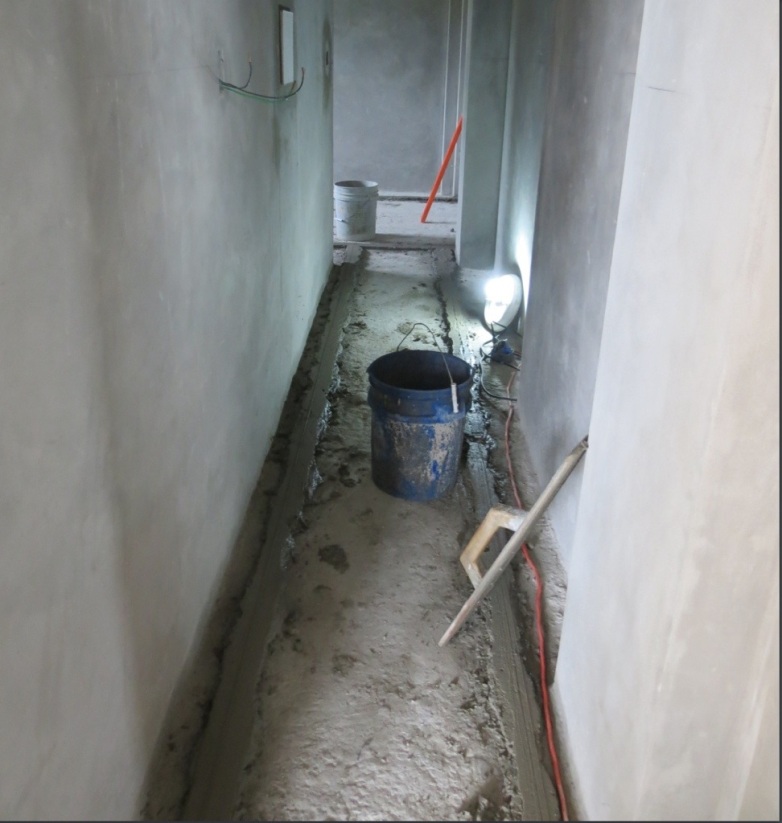 Lines struck for the floor of the hallway between the two bedrooms. 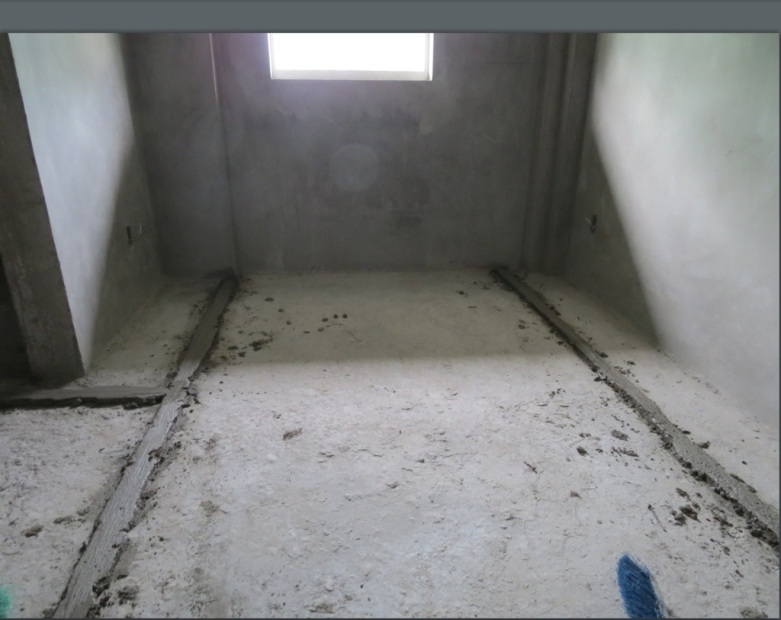 Lines struck for the floor of the smaller of the two bedrooms.

And for the en-suite bathroom.

Outside Martin was finishing the final coat of cement for the sides of the steps that lead to the back garden from the ‘master’ bedroom.

Martin at work with the float.

And then with the sponge for the smooth finish.

Just as we were about to head up the stairs Daniel Camal, our building contractor, arrived and asked us to go up to the Second Floor with him because decisions were required on how we wanted the doors to the walk-in closets/en-suite bathrooms fitted. So we quickly went up to the First Floor and then accessed the Second Floor via the scaffolding.

Once up there we saw Rafael (aka The Frog) balanced on a duck board applying the second coat of masonry sealant to the walls. All of the walls, inside and out, will have two coats of sealant before the paint is applied. This should prevent moisture coming through from the cement and the paint finish should look better and for a lot longer.

We then spent a little time discussing with Daniel where the doors would be fitted and, after he had explained the options to us, we elected to disregard the placement that our architect has signified on the plans and have them fitted a little further back.

Blue arrow indicates placement as per the architectural plans and the red arrow shows where they will now be fitted.

It’s good to make a change.

The headline is based on the 2009 single by Daniel Merriweather which reached number eight on the UK Singles Chart.