Yesterday at around 8 am there was the unusual sound of knocking on our front door. Unusual because we rarely get anybody knocking on our front door (not even to pay unpaid bills!). And especially at that time of the day. On opening the door there was Daniel Camal, our building contractor, with six pieces of granite that he had got that closely match the photographs of granite we had sent him a few weeks ago. Rose and I now need to determine if they are what we want and, if so, for which countertops.

He also imparted the great news that our windows have arrived in Belize City and will arrive on the island next Tuesday. At last. Now the finishing work on our house can begin!

After Daniel had departed my first job yesterday morning was a visit to Captain Shark’s to see if they could eradicate the hugely irritating rattling sounds (yes,plural) that we suffer when driving. I left the ‘cart there and then went to the Post Office, armed with what I thought was the necessary paperwork, to rent a P.O. Box.

It was there that I very quickly found out, after being referred to the manager, that a bill from Coral Cable for an Internet service does not qualify as a utility bill (required to prove a current address in Belize). It has to be either a water, electricity or telephone (landline) bill.

I tried to persuade him otherwise but no matter how many times I implored him with”Please Mr Postman” he would not budge. He did tell me though that he will think about my application (and specifically my inability to provide a copy of a utility bill (the ones we pay in respect of the condo we are renting are all in the name of the owner)) and that I should go back to see him on Monday with my passport.

Whilst I was with him I asked about where I get the address for our build in Ambergris Caye, Belize. From him, he told me. After I had told him where we will be living it turns out that our address will be determined by the distance we are from town. So, our new address is likely to be something along the lines of – P.O. Box 123,Highbury House,1 1/2 miles North, San Pedro, Ambergris Caye, Belize, C.A. Neat, isn’t it.

With my tasks in town completed (not achieved I know, but they were completed) I headed home via the beach and boy was it hot.

Rose and I then had a bite to eat, spent some time looking at the granite samples (making a few decisions as to usage along the way) and then set off to collect the ‘cart ( they had found a spring not fitted properly) to visit our build in Ambergris Caye, Belize and got there just before 3 pm. On the way there we were, of course, able to make use of the newly refurbished Sir Barry Bowen Bridge where we (well OK, me) were pleased to see that the centrally placed girder had been removed (has the Mayor been reading my blog?).

On the drive up there quite a few mosquitos ‘joined’ us for the ride but this didn’t prepare us at all for what they were like as we pulled in to our lot. They were everywhere. And they were ferocious ! Jumping out of the ‘cart we fairly well ran to get to a degree of cover up on the First Floor.

Once up there we found that José and Alfonso had finished their work fitting the Sheetrock (plasterboard for my UK readers) in the living/dining room area (they have to return to fit the boards for the kitchen area). Don’t know why they left it unfinished, but they have!

Looking across the dining/kitchen area from north to south.

At the front of the First Floor José and Alfonso were busy fitting boards for the ceiling in front of where the front doors will be.

Alfonso busy with the drill.

It wasn’t long before they were ready to fit the next board so down they went – amongst the mosquitos- to the Ground Floor to bring another one up. 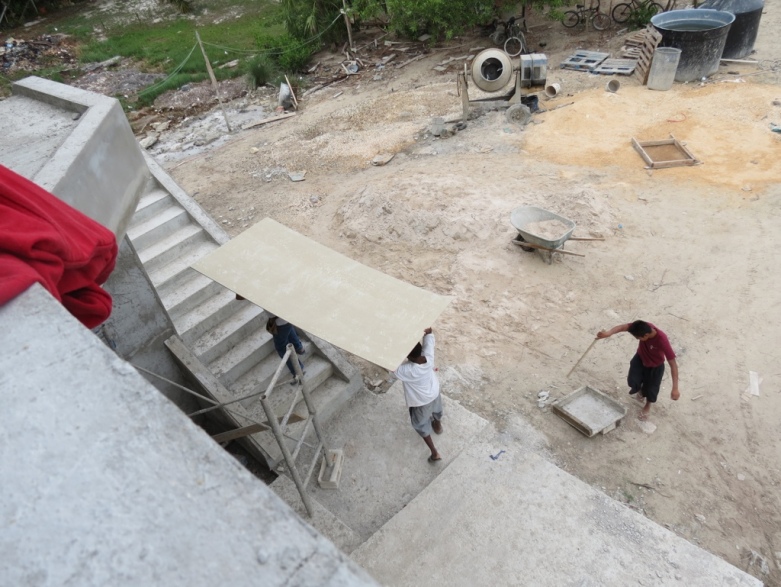 And up it goes!

From the relatively mosquito free zone of the First Floor I could see that at ground level , even though he looked to be being eaten alive, Nicholas was making the acrows that he and Eduardo need to finish off the cement work for the underside of the First Floor northern veranda.

I then took the scaffolding up to the Second Floor to find Martin working on the acrows he needs to apply the finishing coat of cement for the ‘roof’ for the veranda on the western (lagoon) side. Below, at ground level, Angel was cutting the wood to size and sending it up to Martin via the hoist.

Angel making sure it is the right length. 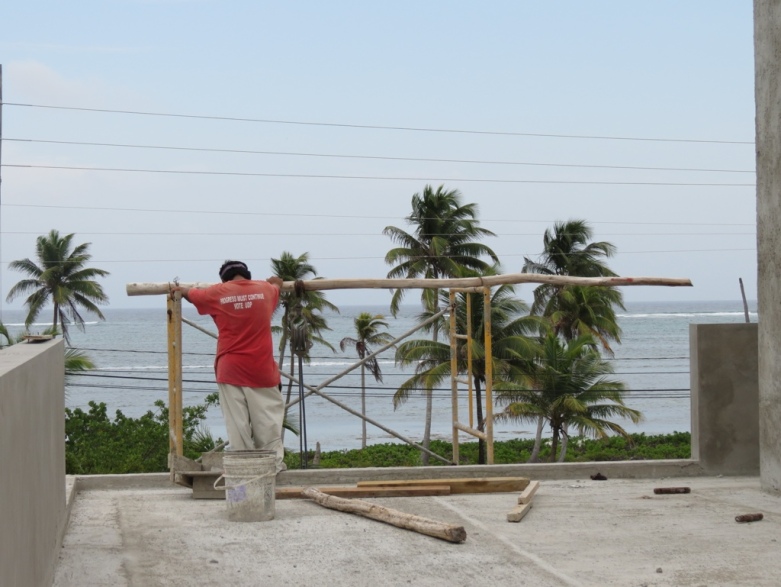 Martin waiting for his delivery. 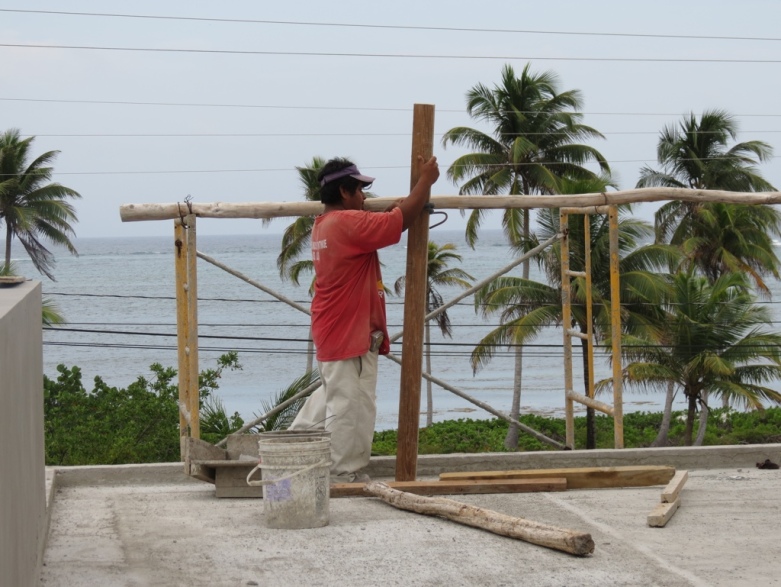 Whilst up on the Second Floor I took the opportunity of taking a photo of our back garden now that the sand covering has been finished.

The next job. What to plant? And where?