Following the tome that yesterday’s edition turned out to be I decided that today’s edition would be much, much tighter. After all, you – the people that take the time and have the interest to read my ramblings- are likely to have far less time than me.

So for those of you for whom time is a precious commodity today’s edition is written with being concise in mind.

I spent a little time yesterday reading The Covenant by James A Michener. The reading this time though was from a paperback and not via my Kindle. A really nice change. There’s something about having a book in your hands and turning real pages and not pressing a button. Or is it an age thing?

I picked up the book at BC’s Beach Bar, where they have a corner set aside for people to deposit books that they have finished with. I will return the compliment in a few weeks when Rose and I move to our build in Ambergris Caye, Belize and clear the bookshelves of the condo we are renting.

With my need to read sated I telephoned Seaboard Marine‘s office to enquire about their shipping services to Belize (this for the goods (TVs, dinnerware, pots and pans, etc)we intend to purchase in Miami for our build in Ambergris Caye, Belize). They have a sailing every Friday with an arrival in Belize City on the following Tuesday. And the rates are very competitive when compared to the other companies I have contacted. Looks like we have found our shipping agent.

Shortly after my call I received an email from Ismael (Milyn) Gomez (the broker we are using) in which he advised me that he has submitted the inventory for the goods we want to ship from the UK to the “BTB” (Belize Tourism Board). We just now need approval and our stuff can start making its way to us (it will take between seven to ten weeks to get to Belize City).

With our respective chores taken care of we headed off to our build at around 3 pm and, having parked the golf cart, made our penultimate walk over the Sir Barry Bowen Bridge.

As we approached we could see that the Mayor was making a final inspection of the work. 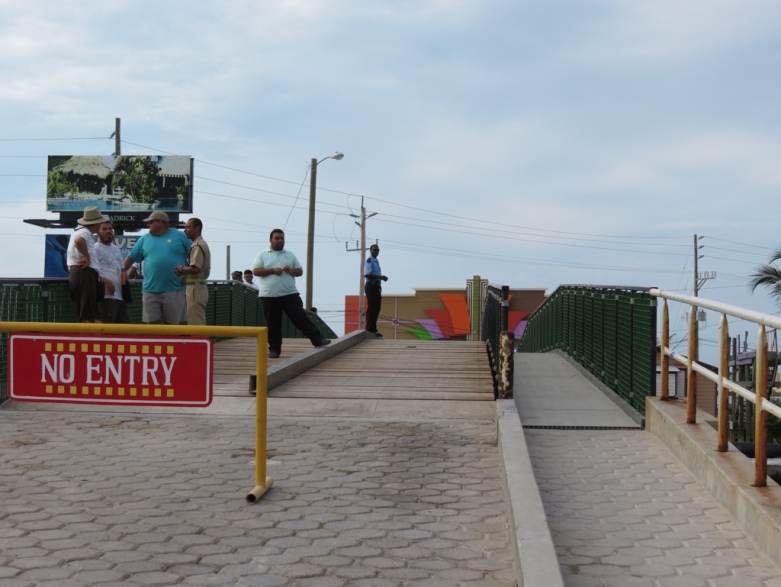 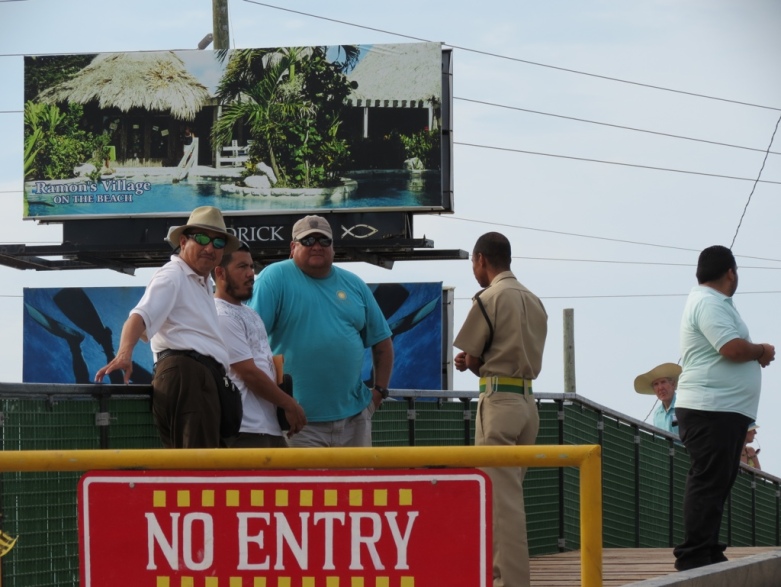 I think the Mayor saw my camera and turned to pose!

Anyway, enough of local dignitaries and back to our build in Ambergris Caye, Belize.

On arrival at the house we could see that Angel and Martin were making good progress with the finishing coat of cement for the beams in the ‘open’ area of the Ground Floor. 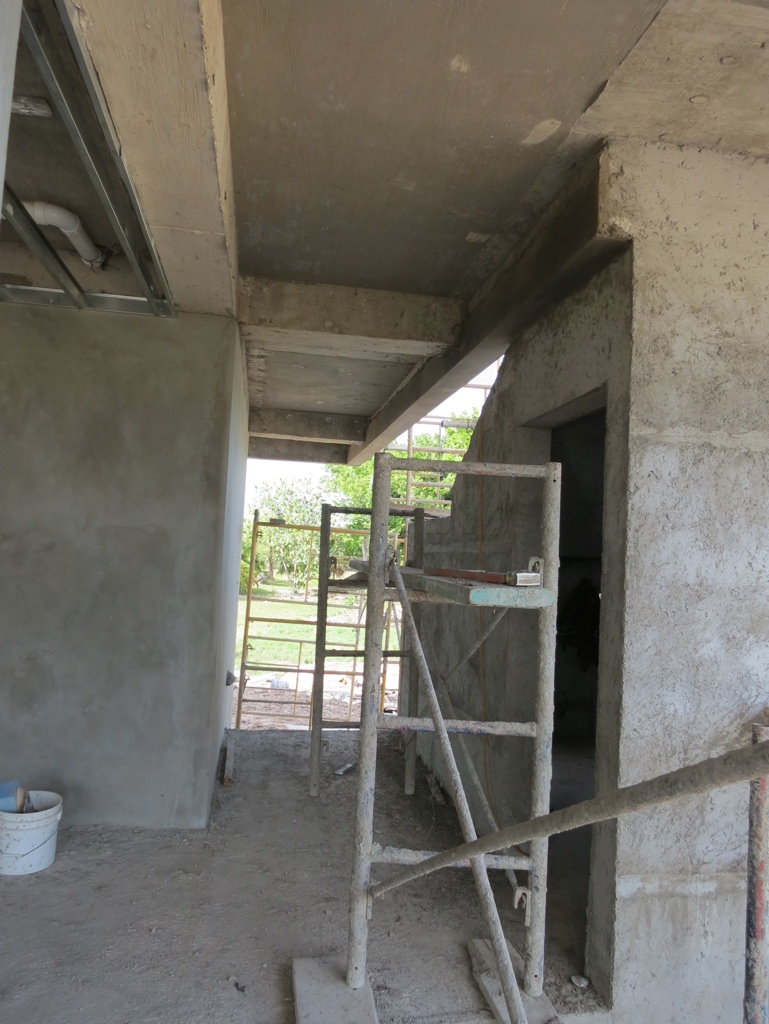 Beams in front of the Pump Room.

It was looking good. But it looked even better when we got up to the First Floor and found José and Alfonso fixing the Sheetrock (plasterboard for my UK readers) for the ceiling in the living/dining/kitchen areas. And it made the room look so different. 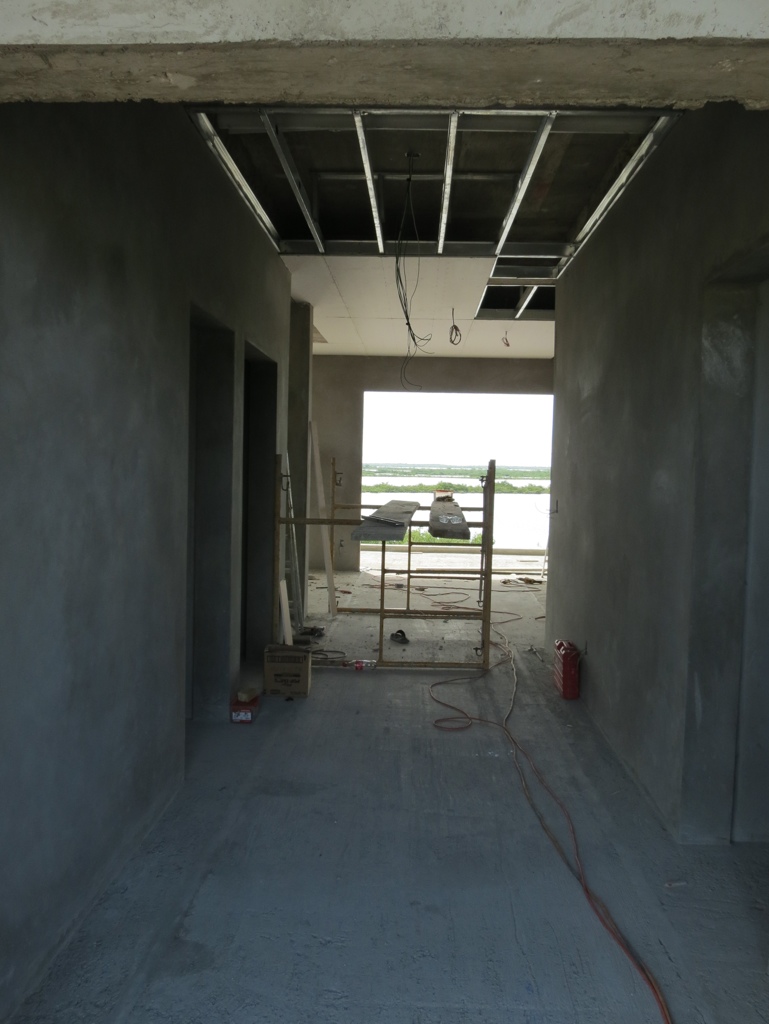 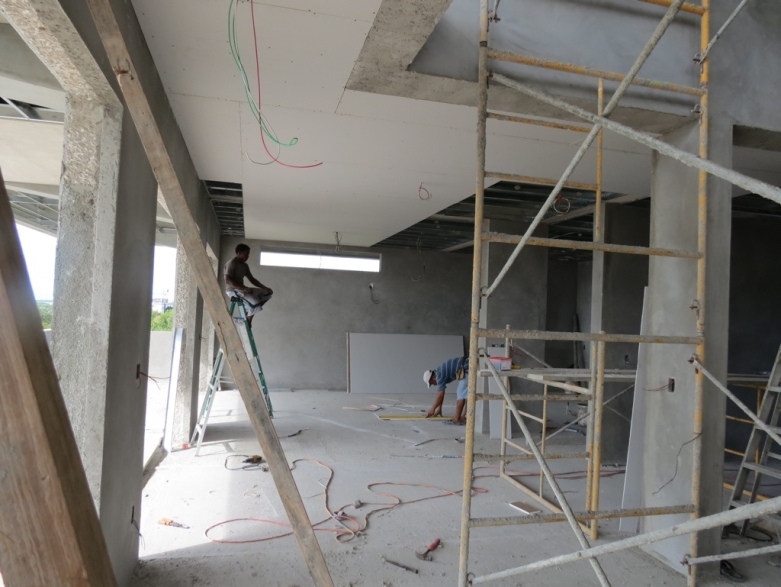 View from the living area through to the dining area.

Rolando (the plumber and electrician) has taken two days off but Rafael (aka The Frog) was at work fitting valves in the Powder Room. 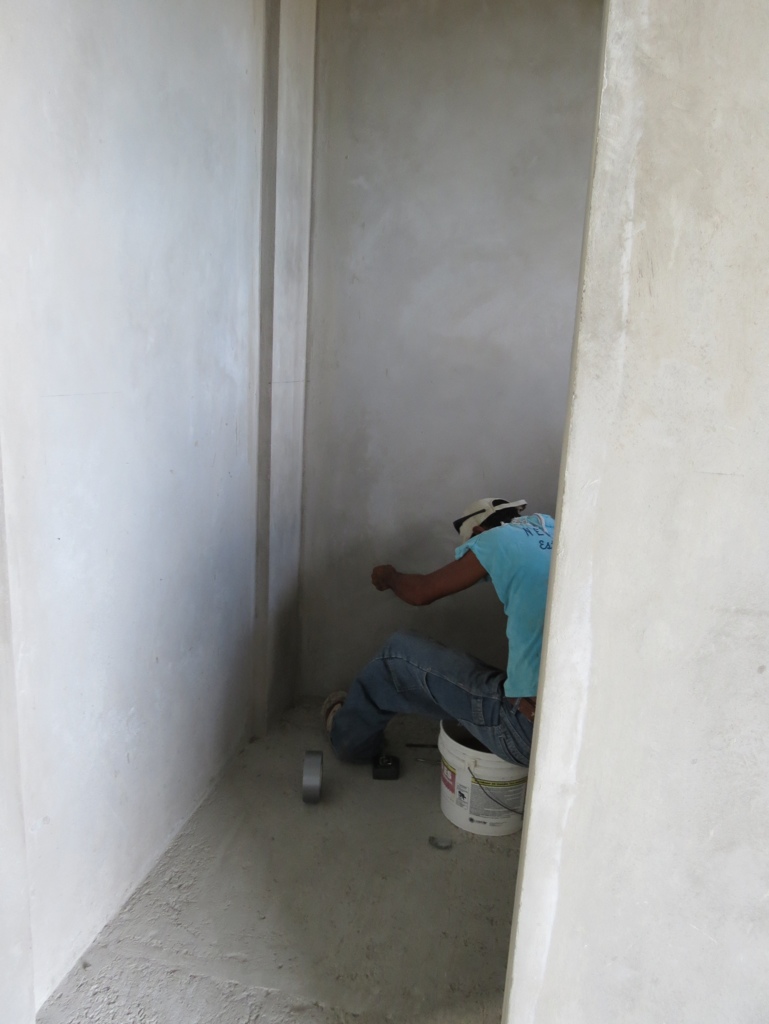 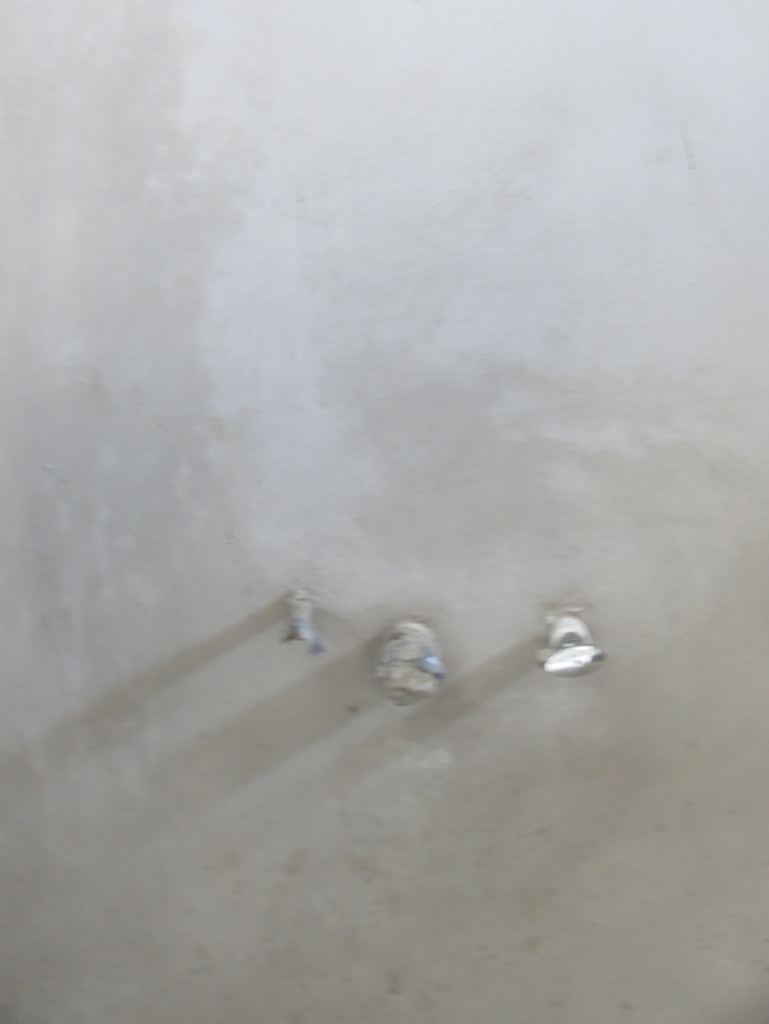 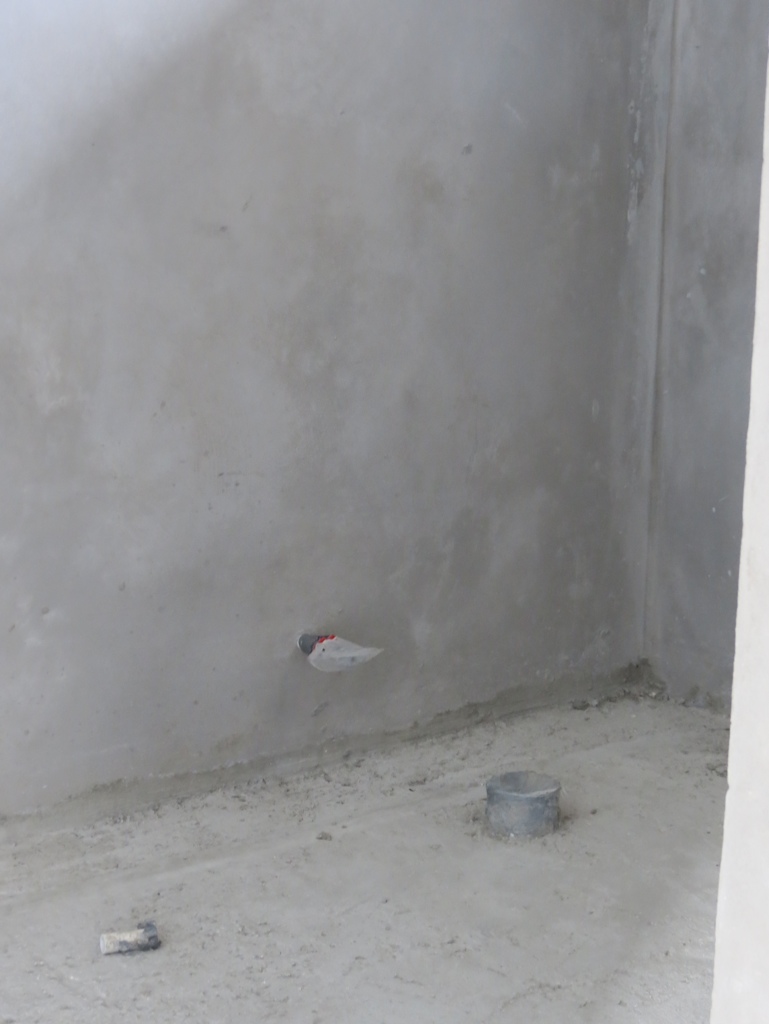 Valve fitted for the toilet.

Before we left the First Floor we went to the western side to see what the ceiling looked like from the lagoon side. 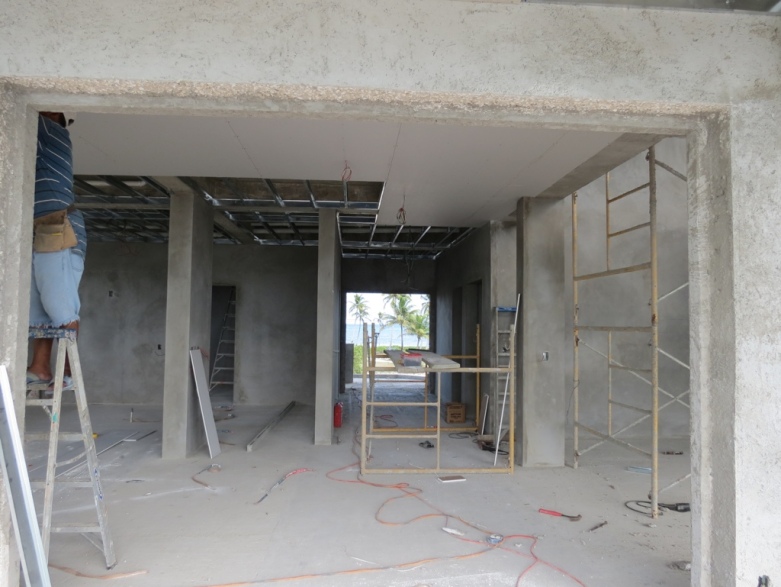 On the way down to ground level we could see that the food and drink cart had arrived and there was a mass exodus by the guys. 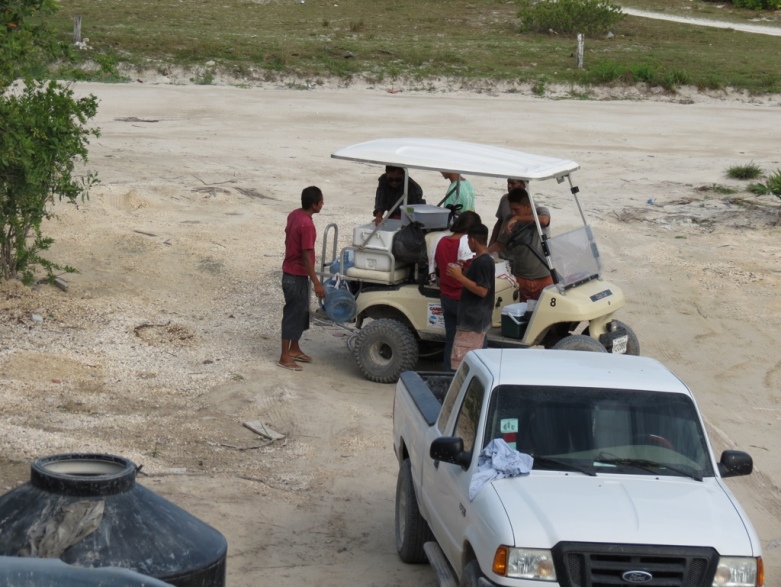 She does a roaring trade on the northern side of the bridge.

As we left our build in Ambergris Caye, Belize I took a walk to the north-eastern corner of our lot to see how work was going on the water tank. The area was swarming with mosquitos (I really don’t know how the guys managed to work in there) but i fearlessly managed to get a few photos! 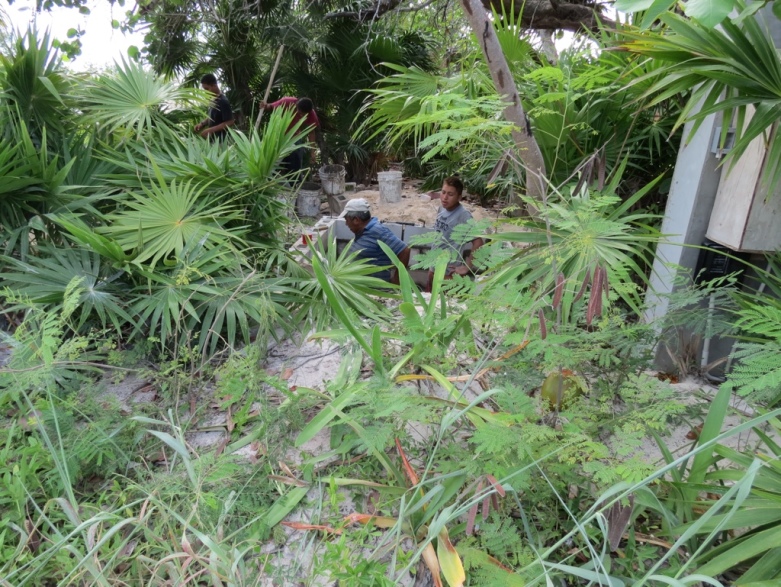 Porfelio supervising operations ably assisted by the youngest members of the team. 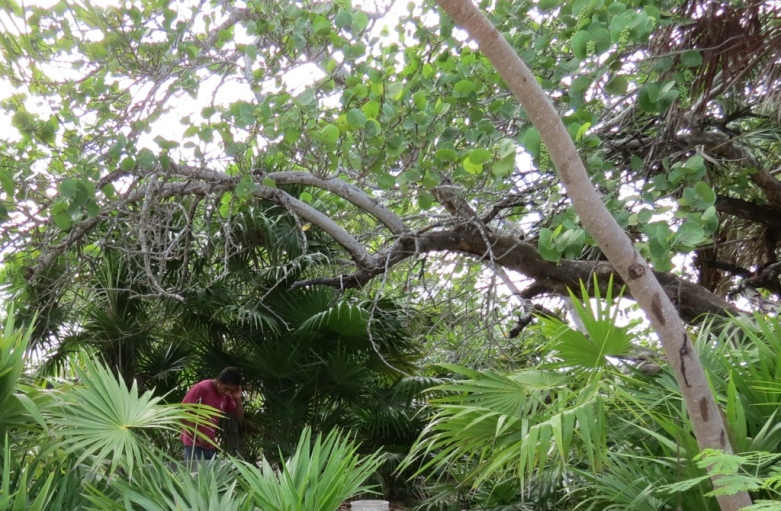 Miguel “knocking-up” the cement in the “jungle”!

So what happened with me being concise? Didn’t work out, did it!

The headline is based on track three of Don Gibson’s 1959 album “That Gibson Boy” which didn’t make the charts.