Woke around 3 am yesterday morning (didn’t get up until around 4.10 am though) to the sound of pouring rain. Exactly the same sound I had gone to sleep listening to the night before. It continued right the way through until around 6.20 am and then returned intermittently for most of the morning. 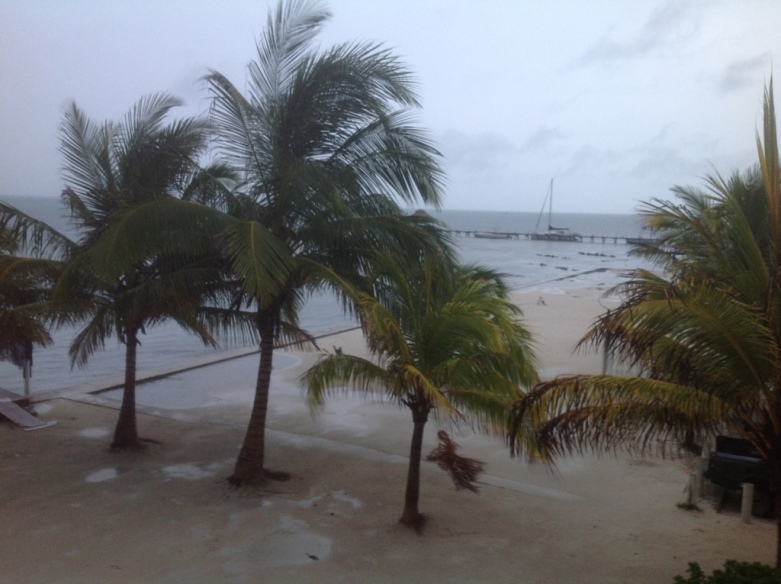 Got an email from Daniel Camal, our building contractor, on Monday (in response to one from me) advising that it is OK for us to ‘press the button’ on getting the stuff we have in storage in the UK shipped to us. So yesterday morning I ‘fired off’ an email to Excess International Movers asking them to move it on over.

In his email Daniel also advised that he was going to Belize City to ‘chase up’ on our consignment of windows and sliding doors from the States, place an order for the tiles at The Tile & Stone Center and place an order for light fittings at Benny’s. All of these items being, of course, for our build in Ambergris Caye, Belize.

Just as Rose and I were preparing to leave our rented condo we received a call from Daniel advising that the tile we had chosen for the entrance stairs and First Floor veranda was ‘out of stock’ and would take nine weeks to manufacture sufficient stock for our needs. Not wishing to delay things I ‘phoned Jesus Cervantes at The Tile & Stone Center and asked him what tiles he had in stock that closely matched our original choice. He responded positively and advised that he would send a sample to us on the 4.30 pm Tropic Air flight to San Pedro.

With arrangements in place for the replacement tile sample made Rose and I set off to visit our build in Ambergris Caye, Belize. By this time it was 2.45 pm and we were ‘running’ slightly later than normal but luck came our way as we were approaching the Sir Barry Bowen Bridge and saw Rafael (one of Daniel’s guys) in front of us on his bike. Knowing that he would have the truck on the other side of the ‘Bridge we parked the golf cart quickly and caught up with him and managed to secure a lift.

Once at the build we made immediately for the Ground Floor where we saw Nicholas at work laying a coat of cement for the Store Room/Garage floor. 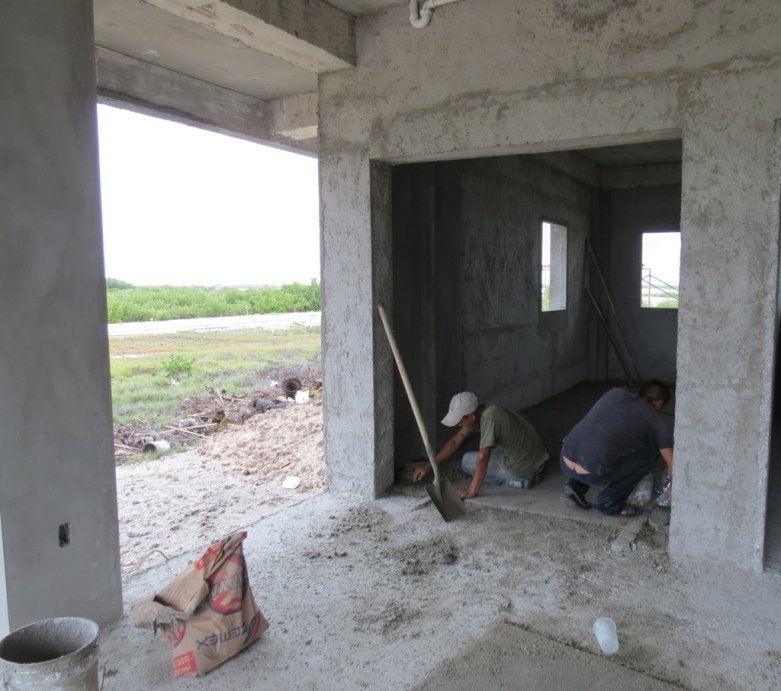 A walk in to the self-contained apartment and we could see that José had been busy at work fitting the ceiling grids.

Fitted in the bathroom for the ‘master’ bedroom. 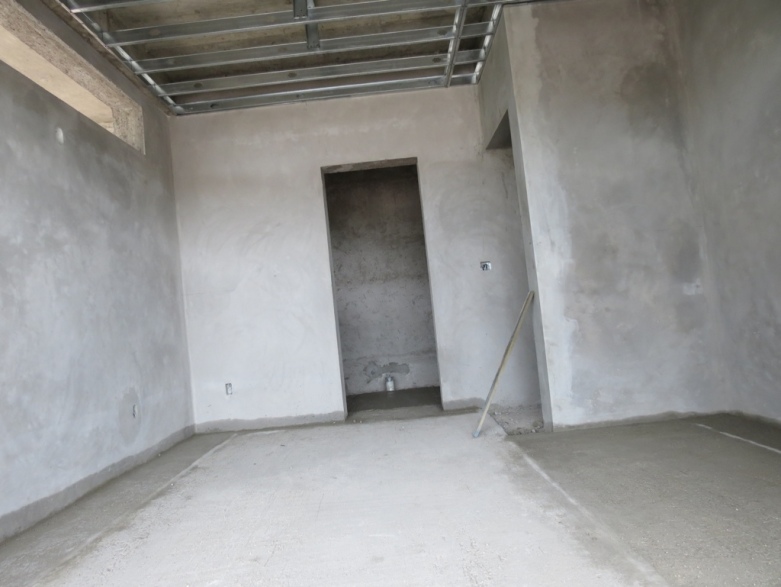 And for the ‘master’ bedroom too.

They had also finished laying the cement for the floor.

Outside on the veranda we could see that work had begun on creating the stairs (a late revision to our plans) that will provide easier access to the rear garden. 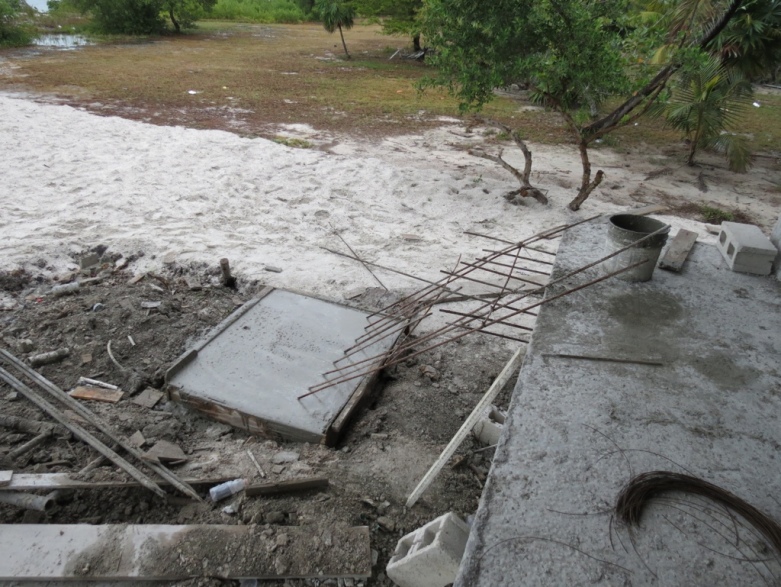 Base poured and rebar in place.

As we left the apartment we saw José busy at work fitting the ceiling grids for the living/kitchen area.

José at work on the final room in the self-contained apartment.

On the way to the First Floor we were going to take a quick look to see how the digging for the septic tank and soak-away was going but saw straight away that the heavy rain had put a stop to any work.

Waterlogged area in front of where the septic tank will be.

Up on the First Floor Sam, assisted by Miguel, was applying the final coat of cement to the cantilever beams. 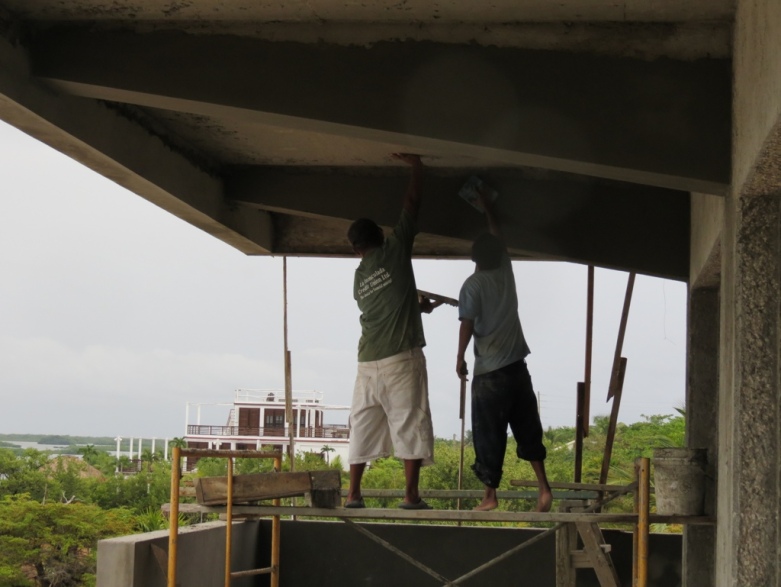 On the last of the ‘beams.

Although we knew that there was no work taking place on the Second Floor Rose and I climbed the scaffolding to take final measurements for the walk-in closets that we have to produce our designs for.

Whilst up there we could see just how badly the roof terrace and veranda areas need the final coat of cement to provide the necessary gradient for rainwater to ‘run away’ via the pipes in the veranda walls.

South-east corner of the roof terrace.

By now it was time for Rose and I to head home and on leaving our build in Ambergris Caye, Belize we could see that Nicholas was just waiting for the cement to dry a little before he applied the smooth finish for the floor of the Store Room/Garage.

The headline is based on the 1947 single by Hank Williams which reached number four in the US Billboard Country Singles chart.