The day started off with me doing what I should ave done yesterday – posting the latest edition of the blog. The disciplines instilled in me when I worked in the newspaper publishing industry are sadly now not as rigidly followed by me as they once were. I am now retired though!

With the edition published I got ready and went for breakfast – yes, at Estel’s – before catching the 8 am Belize Express Water Taxi to Belize City for my 11 am appointment with the dentist to have my stitches removed. Just before I left Estel’s I was pleasantly surprised when I heard a voice saying my name. I looked up to find that it was Wes, a reader of this blog for a couple if months. We didn’t get a chance to say much to each other because I had the ‘Taxi to catch and Wes was having a last breakfast at Estel’s before setting off for home. Brief though it was it was really good to meet him.

The time in the chair this week was really short in comparison to my last visit. Doctor Pedro Habet didn’t take hardly anytime at all to remove the nine stitches – and painlessly (for me and him!) too – and take impressions of my upper and lower jaws. Next week the replacement programme starts (two sessions a day) and this will run for weeks. Nearly there.

With such a quick visit to the dentist I was able to catch the noon ferry (this time I used the Caye Caulker Water Taxi) to get back to San Pedro and once again witnessed how they do things in Belize. We had left the mooring and were heading out when the boat slowed and went in to reverse to go back to the ‘Terminal to pick up three passengers! Imagine a bus in London doing this!!!!

Rose was parked up in Barrier Reef Drive waiting for me when the boat docked at 1.40 pm) and we headed straight away to our build in Ambergris Caye, Belize.

As is customary for us now we proceeded to go from floor to floor to see what had been done/what was going on.

We started off at the Ground Floor first (sort of sensible really) and were pleased to see that the electrician had been busy installing the ‘boxes’. 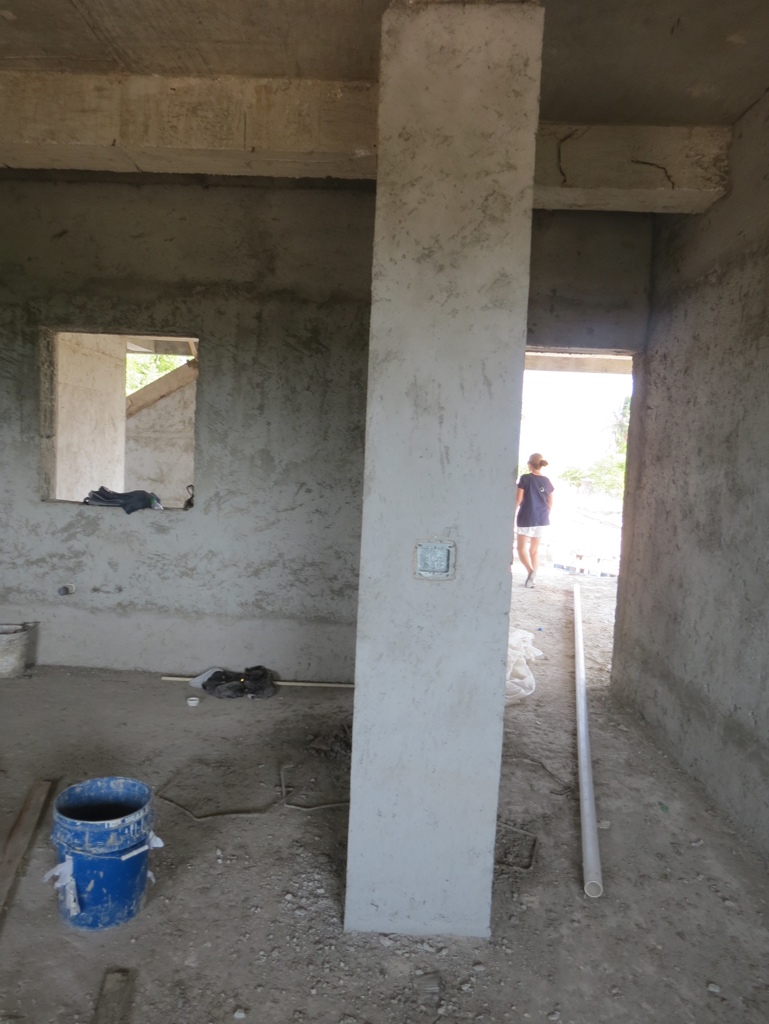 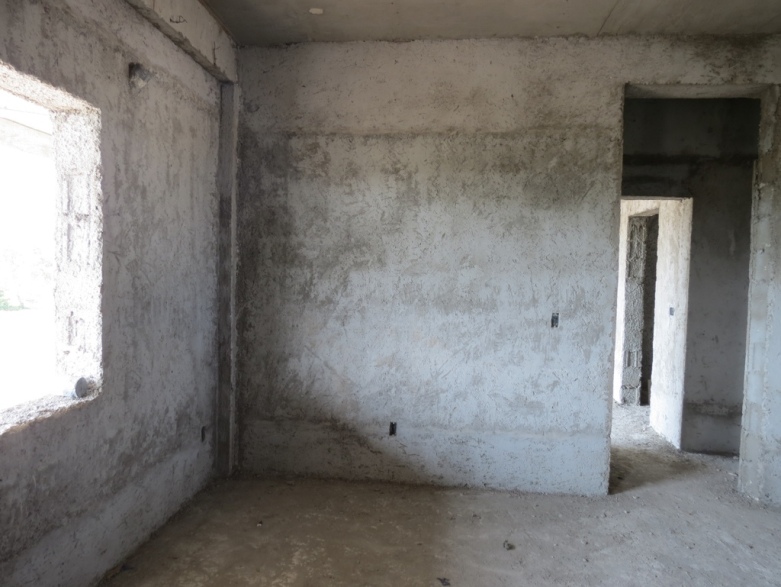 Light switch and power point boxes in place where the sofa will go in the kitchen/living room.

Cable box installed for where the TV will go in the kitchen/living room.

Box installed for the light switch just inside the entrance to the self-contained apartment.

A quick look in to the store room and we could see that the guys were really serious about using this as a changing room.

Somewhere to hang the clothes. And note the small mirror!

Up to the First Floor and en-suite bathroom to the bedroom (Rose’s handicraft room) was being rendered.

Next to the Utility Room which Edson had been rendering yesterday and there were obvious signs that the electrician had been at work. 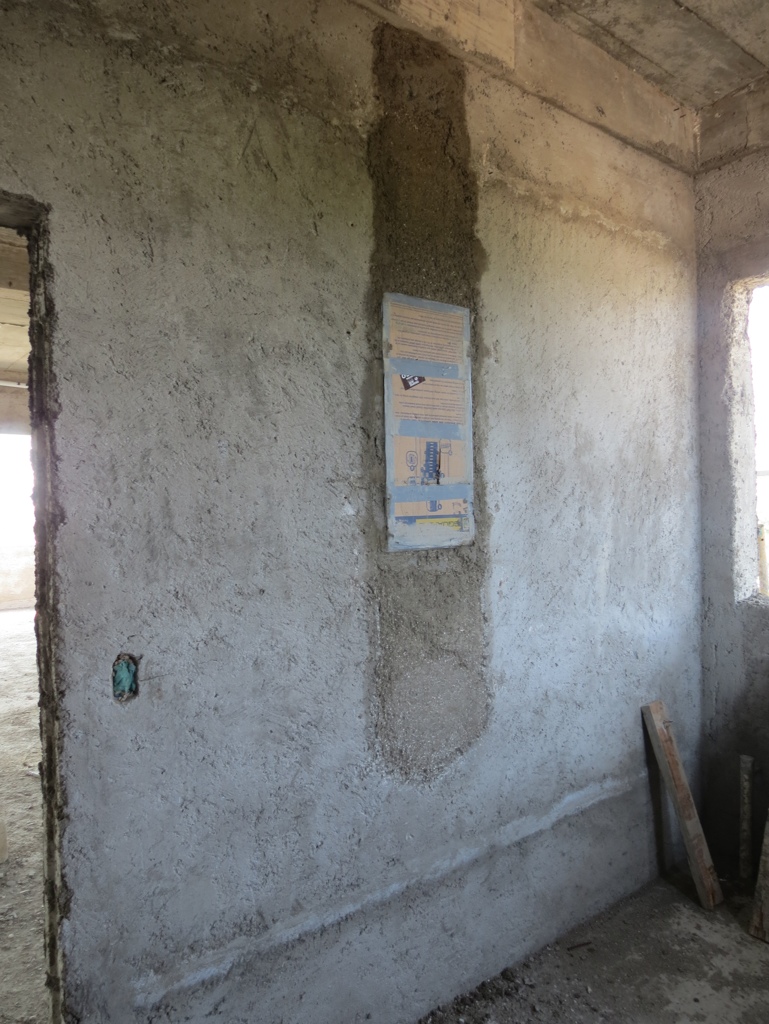 In the hallway Edson was at work in the closet/mud room.

Edson striking the lines in the closet/mud room.

On to the living room area where Oscar was rendering between the lines that he had struck earlier. 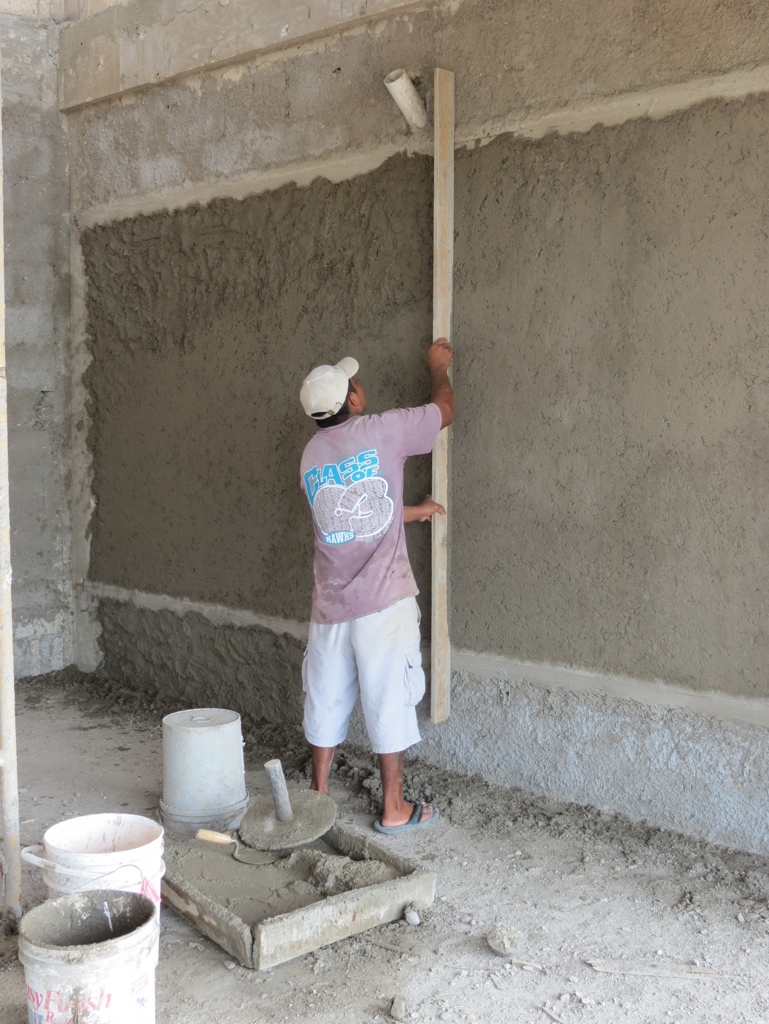 Using a feather edge (or Darby) to level off the cement.

On the other side of the room (dining area) the electrician was cutting the air conditioning pipe to the required size. 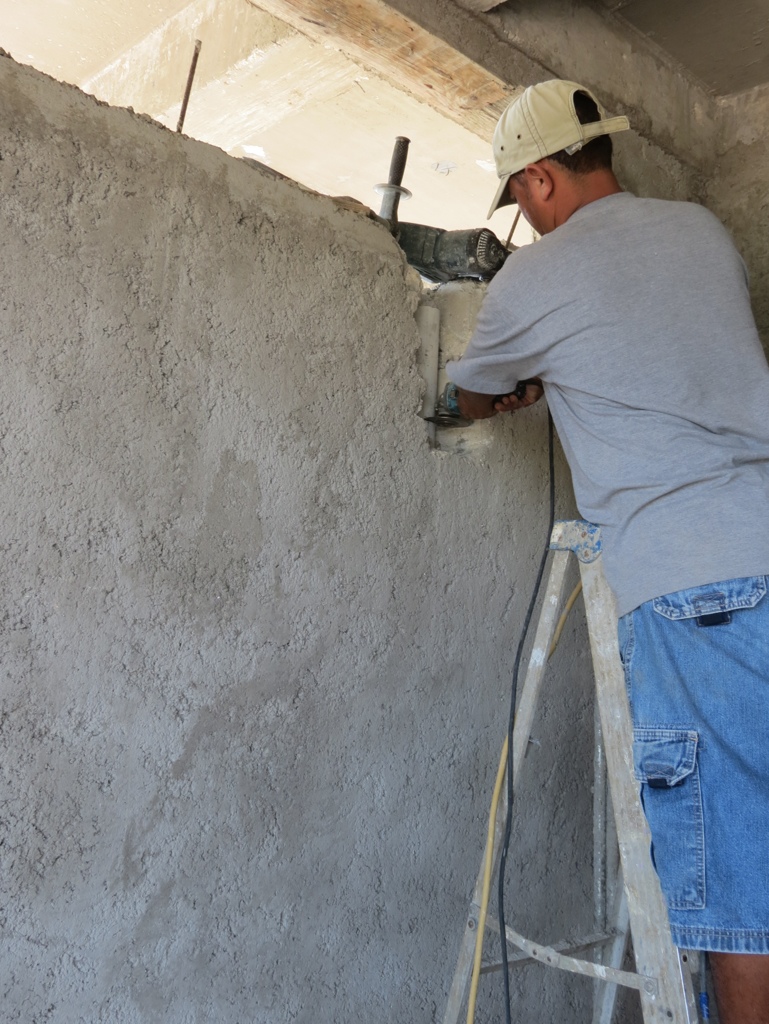 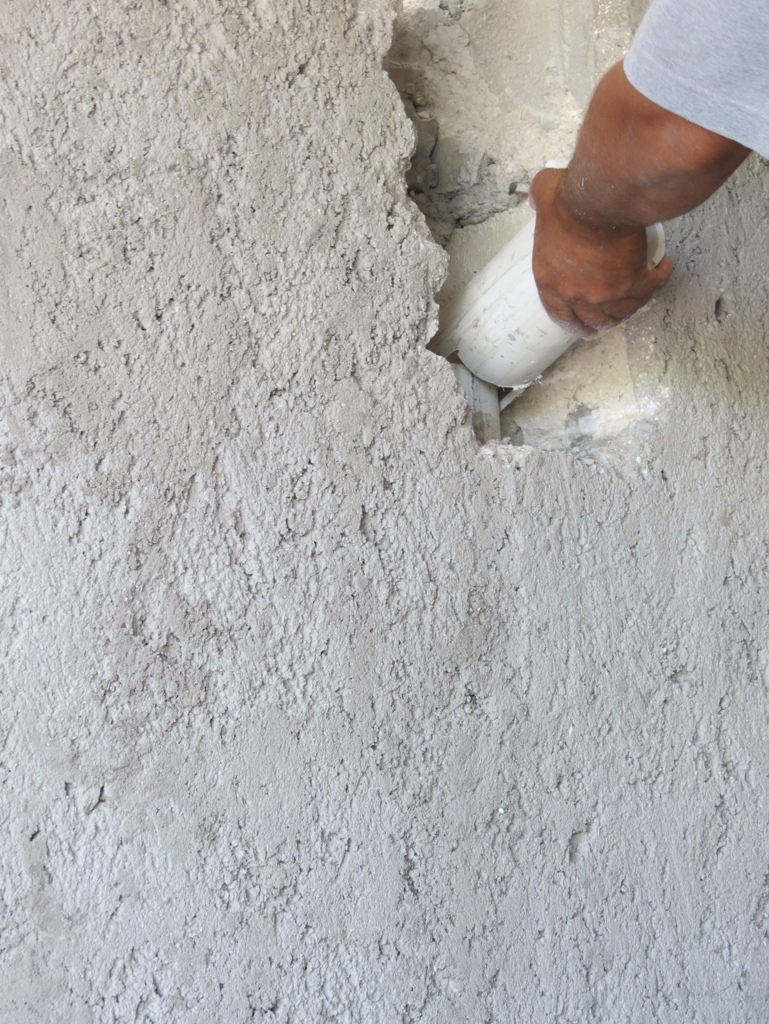 Up the scaffolding to the Second Floor where Porfelio was removing the firms from the roof of be veranda.

Porfelio removes a support and Eduardo disposes of it using the quickest route!

Not far away Eric was applying cement to the exterior was to the left of where the sliding doors of the Master Bedroom will be.

Eric at work with a feather edge.

And all the while Miguel, the youngest member of the Second Floor, was keeping everyone supplied with cement. 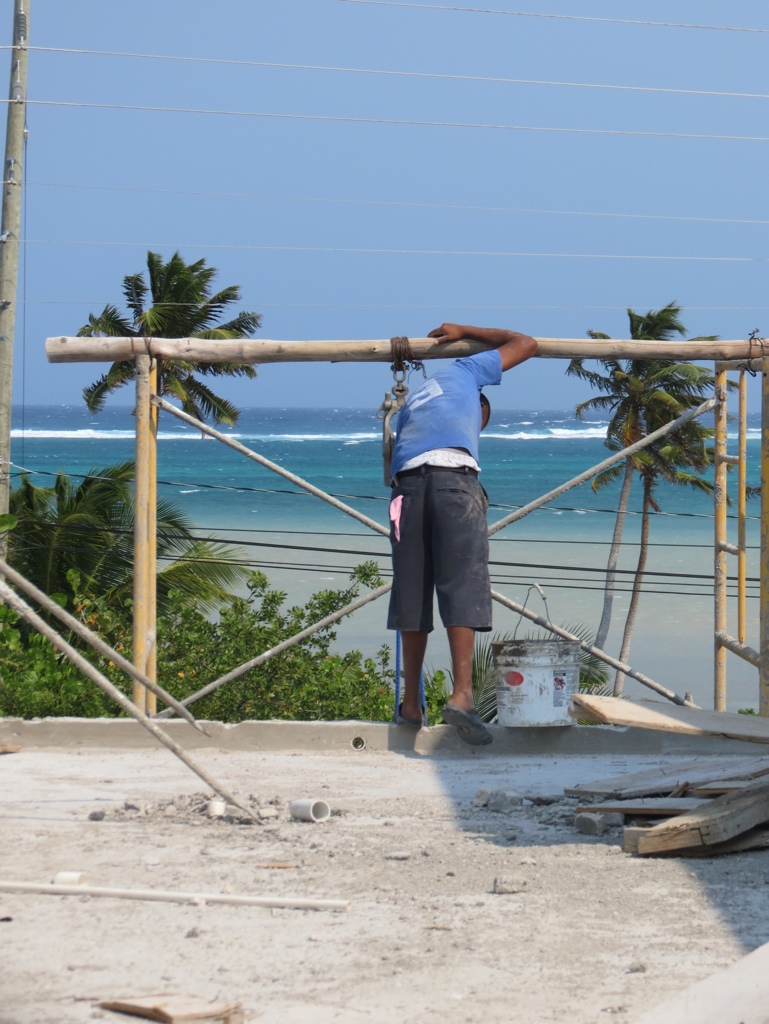 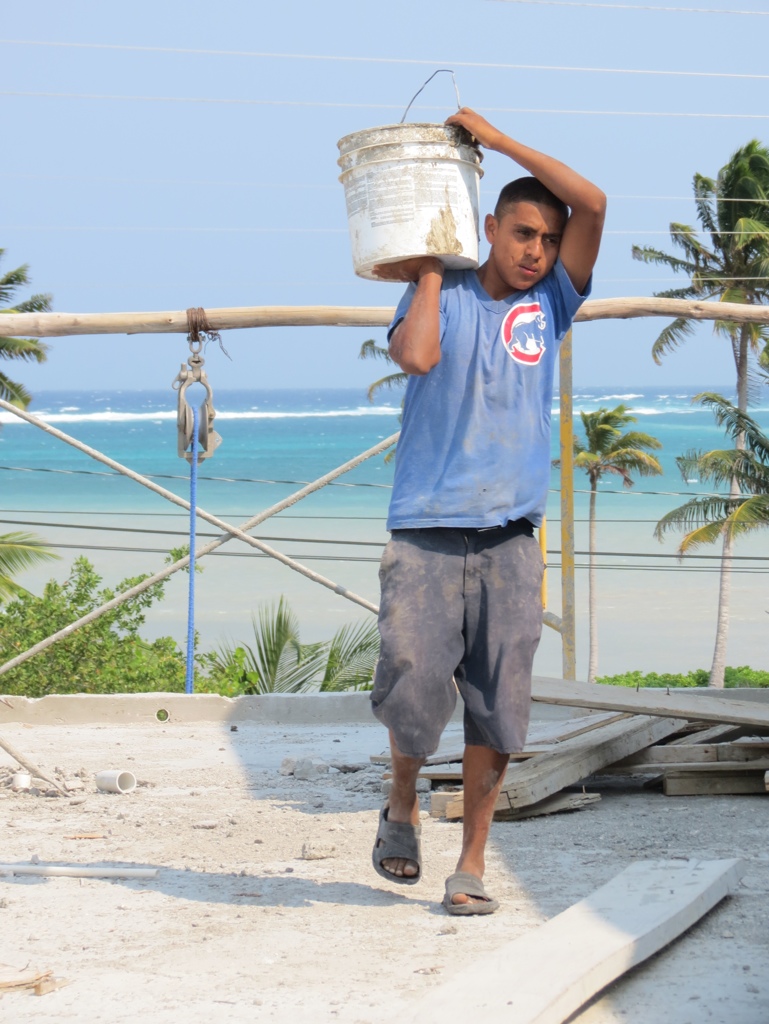 The headline is based on the title of the album by Janis Ian which was released in 1975. It reached number one in the US Billboard Hot 200.